Police forces in England and Wales have recorded the highest number of crimes in 20 years, driven by a sharp rise in offences including fraud, rape and violent attacks.

The figures, which have been published by the Office for National Statistics (ONS), show knife crime, theft and domestic abuse all increased in the 12 months to March. 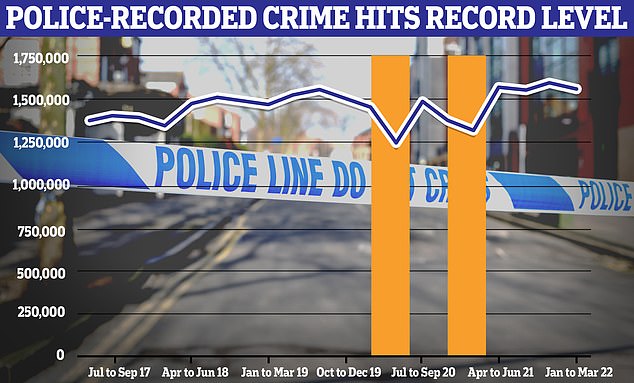 The orange blocks in the graph represent lockdown restrictions, coinciding with falling crime

Some of this increase may reflect improvements seen in reporting over the last few years.

Responding to the figures, Diana Fawcett, chief executive at the charity Victim Support, said: ‘Record rises in crime levels are always worrying ⁠— behind these statistics are real people, and being a victim of any crime can have a devastating and long lasting impact.

‘Regardless of the reason for the increase, this huge rise in recorded crime coincides with victims across the country facing agonisingly long waits for trial.

‘With the highest number of cases for 20 years coming into the criminal justice system, we need urgent action to address the backlog of cases, to ensure that those who’ve had the courage to report a crime get the justice they deserve.’

Billy Gazard of the ONS said: ‘Sexual offences recorded by the police were at the highest level recorded within a 12-month period in the year ending March 2022, a 32% increase from the previous year.

‘These changes may reflect a number of factors including the impact of high-profile cases and campaigns on victims’ willingness to report incidents.’

While theft offences jumped by 15% to 1.5 million in 2021/22, this is still below pre-pandemic levels, when the number topped two million.

Many subcategories of theft saw an increase in the latest figures, though this follows a sharp drop in 2020/21 when levels were affected by Covid-19 lockdowns.

Theft from the person was up 77% in the year to March, theft of a motor vehicle was up 22% and shoplifting rose 21%. 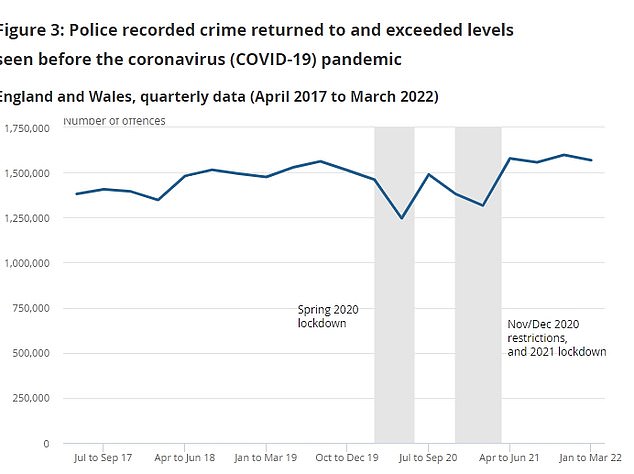 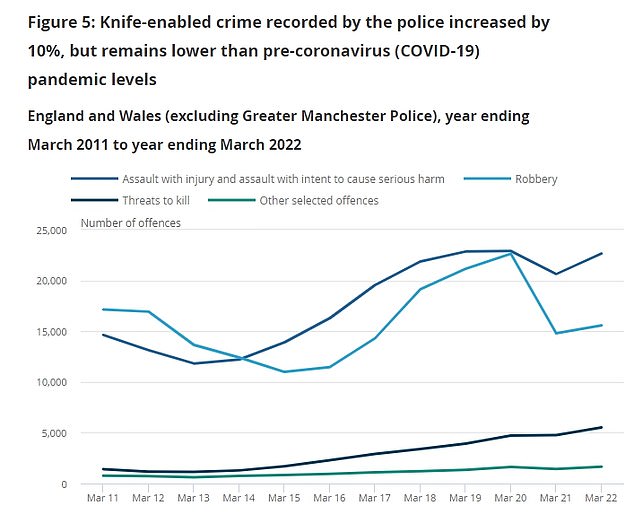 The charge rate has been on a downwards trend for several years and now stands at around a third of the level in 2014/15, when it was 15.5%.

The Home Office said these trends ‘are likely to reflect, in part, improved crime recording processes as well as a more complex crime caseload being dealt with by the police, with the rise in violence against the person and sexual offences’.

Director of Public Prosecutions, Max Hill QC, and Chief Constable Sarah Crew, the National Police Chiefs’ Council lead for rape and adult sexual offences, said: ‘Rape is a devastating offence and we are committed to improving every aspect of how these life-changing crimes are dealt with.

‘Close joint working from the very start of an investigation means we can build the best possible cases more quickly.

‘With police going to the CPS earlier in the process and more often, the rise in charging decisions will lead to more trials and more convictions.

‘Early advice in these cases has been key in helping us use our joint resources more effectively and narrow the gap between the number of offences reported to the police and cases going to court.’