A CRUEL son has mercilessly mocked his mum's dodgy dinners as snaps of bizarre blobs on plates and pie with crackers left his mates in stitches.

Clem Johnson's ruthless pals grilled his mum's lovingly cooked grub after he shared pictures of the questionable dishes in a group chat – with one friend claiming they looked like they'd been "cooked in a washing machine". 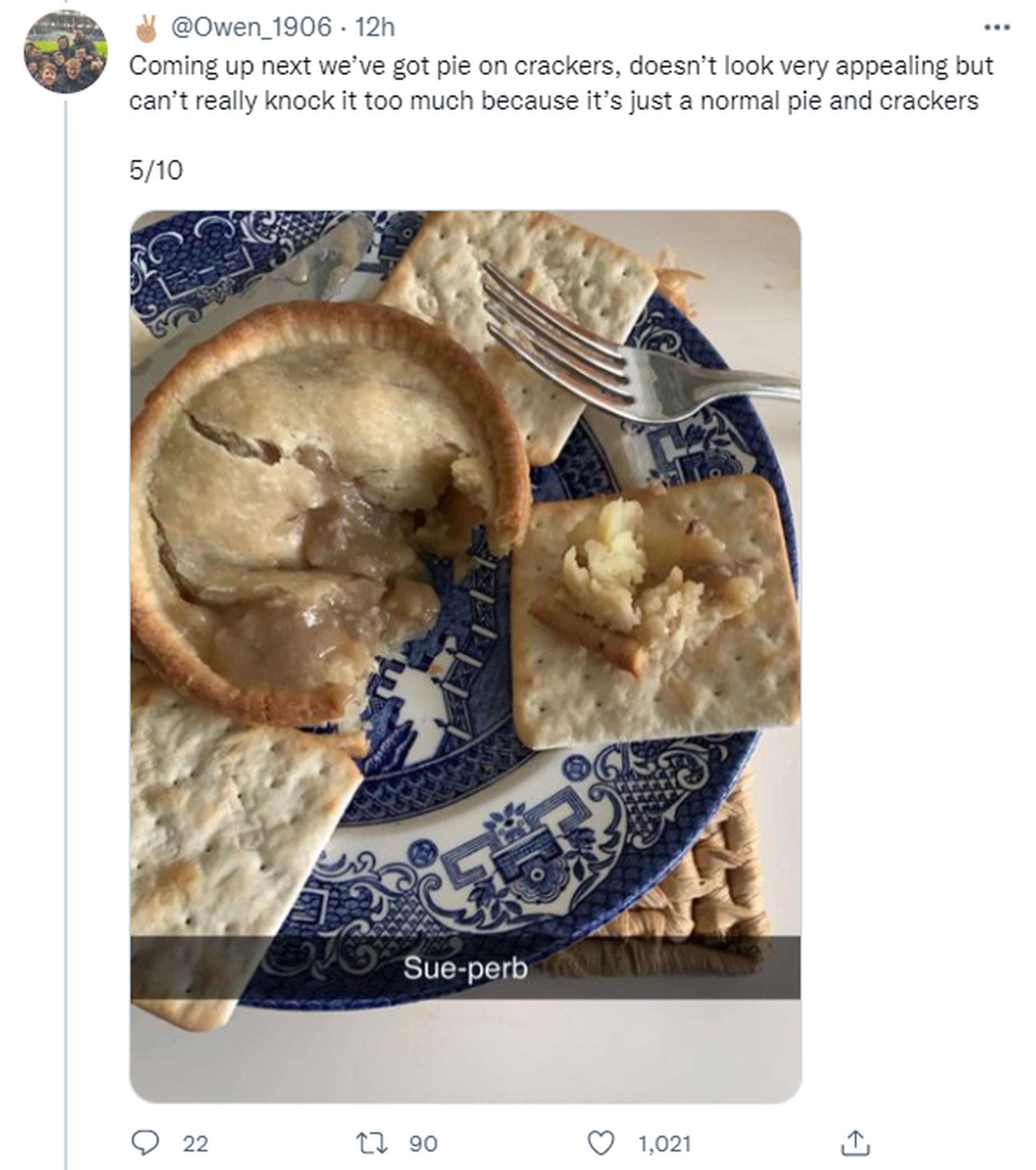 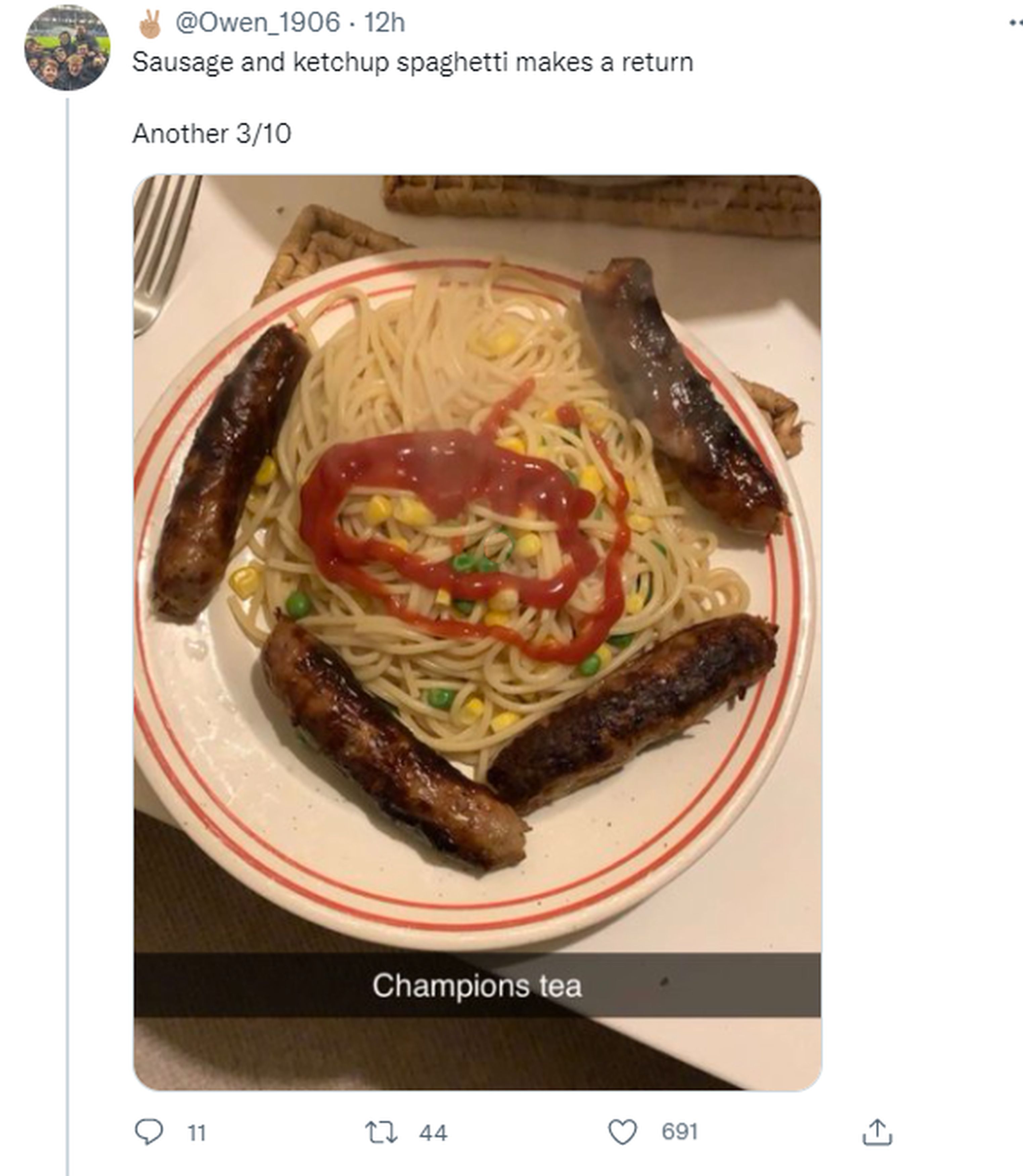 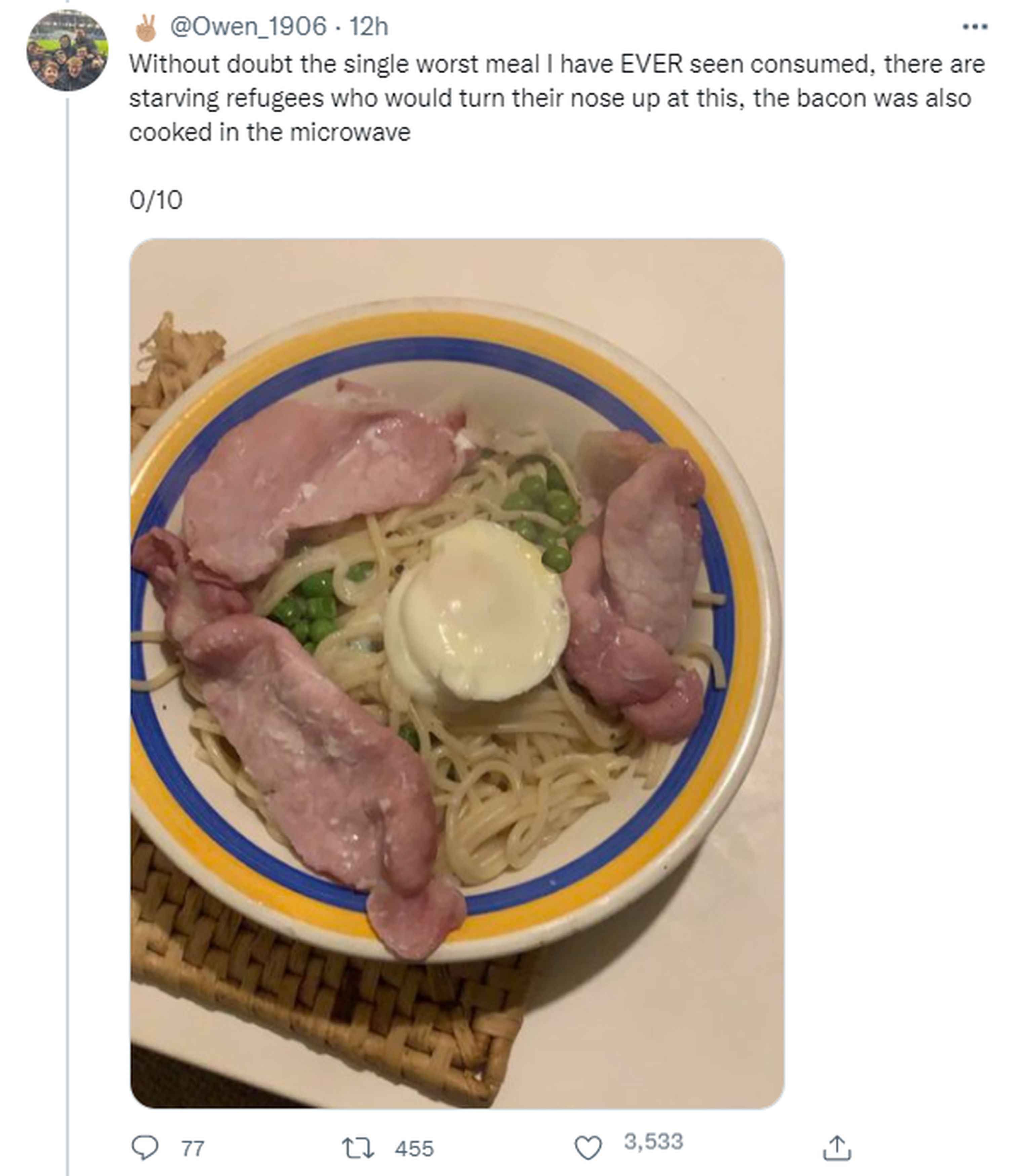 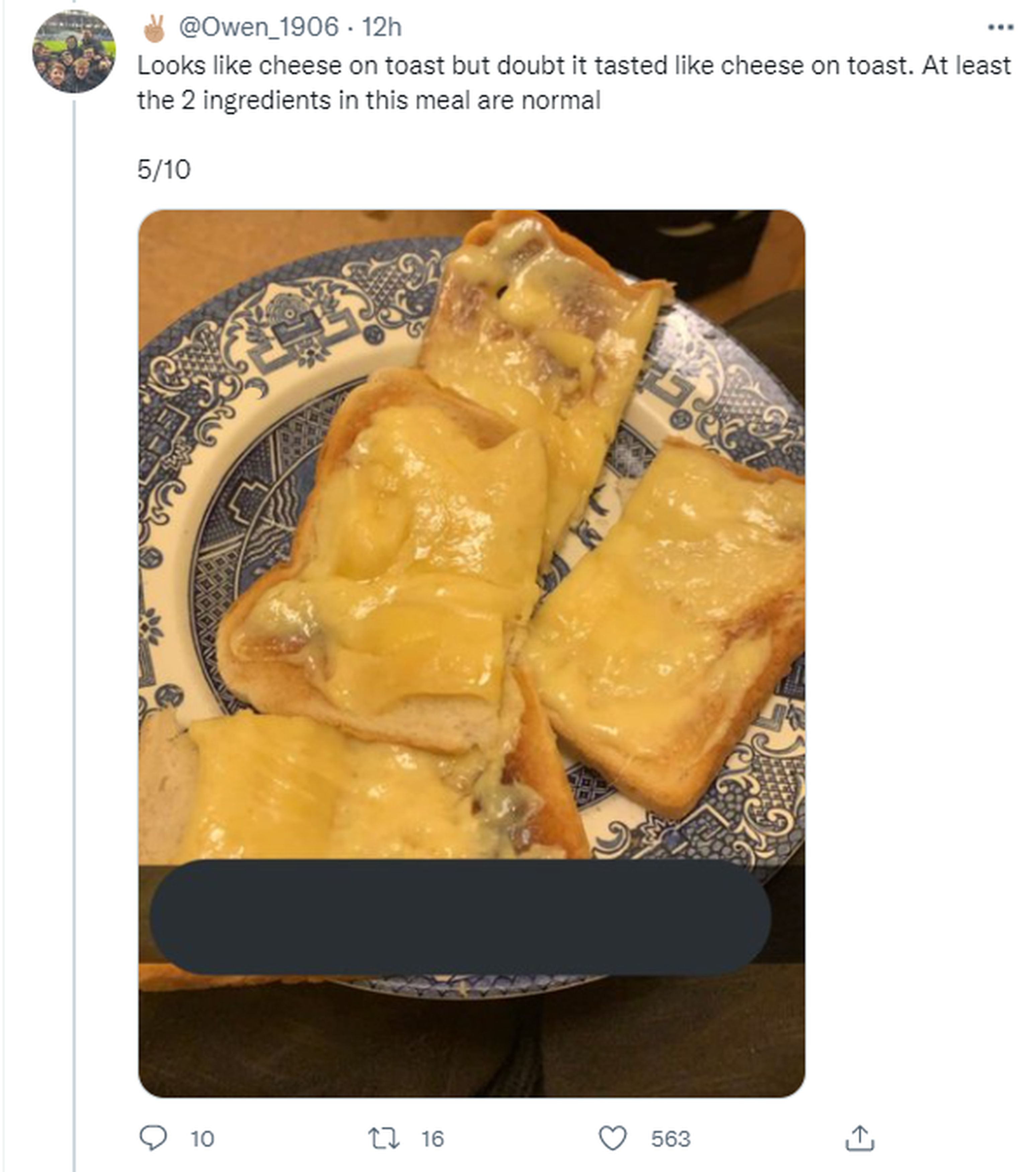 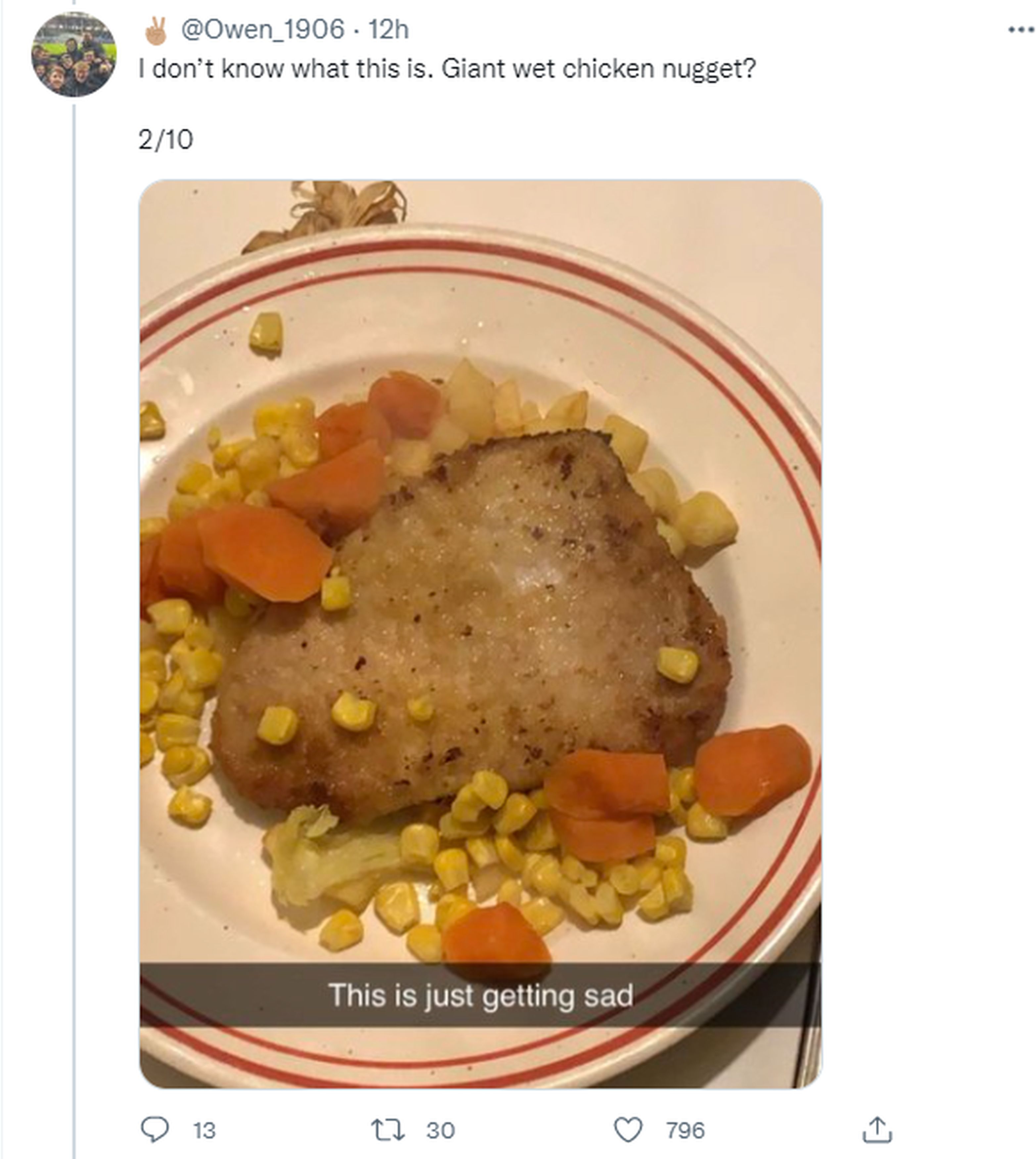 The 24-year-old sent the photos to his Liverpool season ticket holder pals with hilarious captions – including two meals that were so odd they were branded "unidentifiable".

Other dishes included microwaved bacon, pie with cream crackers and spaghetti with ketchup.

His friend Owen Southwood eventually became so stunned by Clem's diet that he shared snaps on Twitter, with the tweet thread attracting more than 35,800 likes and 4,920 retweets as he reviewed each dish.

Owen, from near Liverpool, Merseyside, said: "We all just send our food in whenever we make something that looks nice, so he does the opposite.

"It started about two months ago with the sausages and spaghetti. His mum cooks the majority of them.

"Some of them caused more of a stir in the group than others.

"The worst one was the spaghetti with egg and bacon. We voted as a group that it was the worst meal we’d ever seen.

"The egg and chips wasn’t even that bad really – it’s just the presentation. The pie on crackers got called worse than rations." 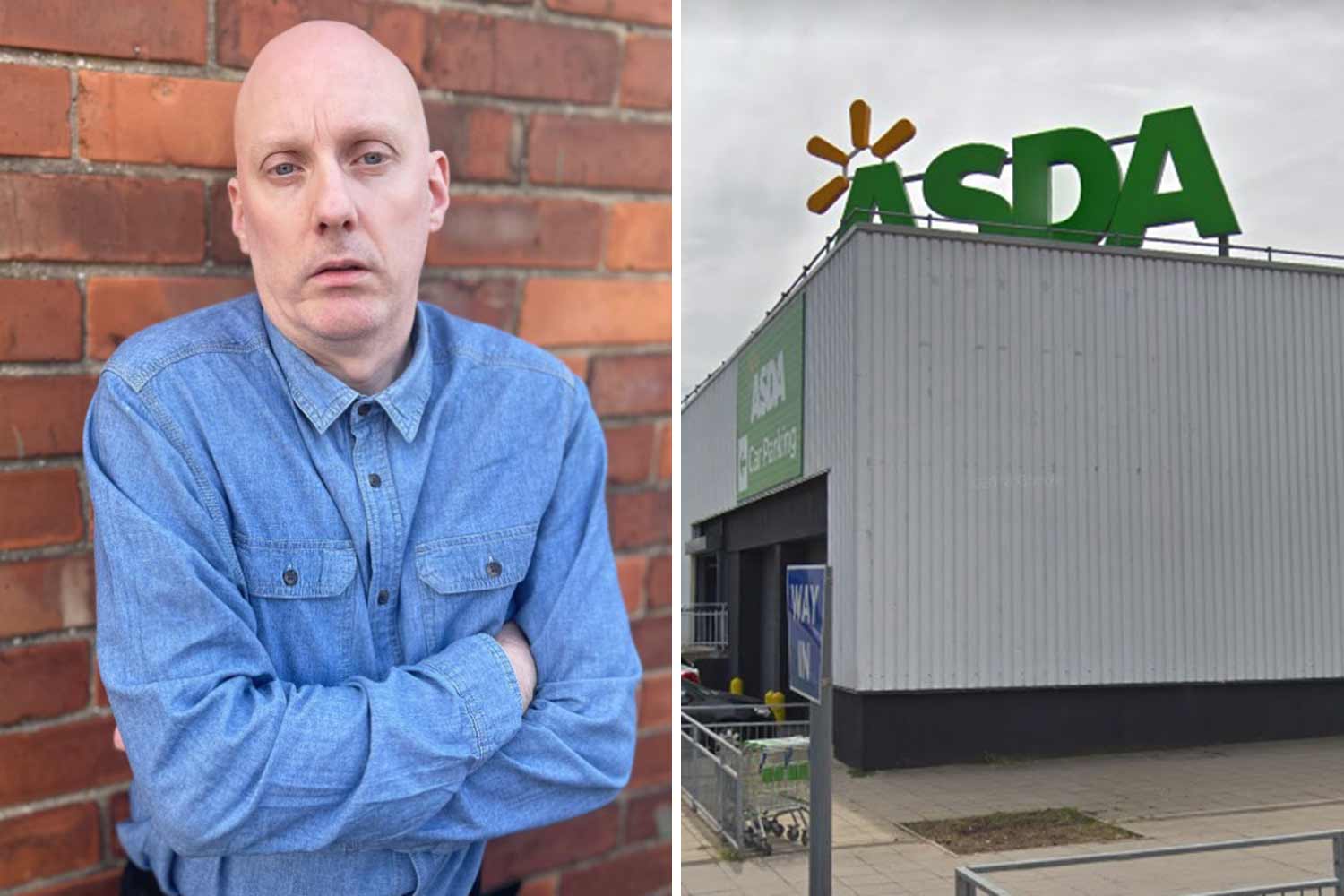 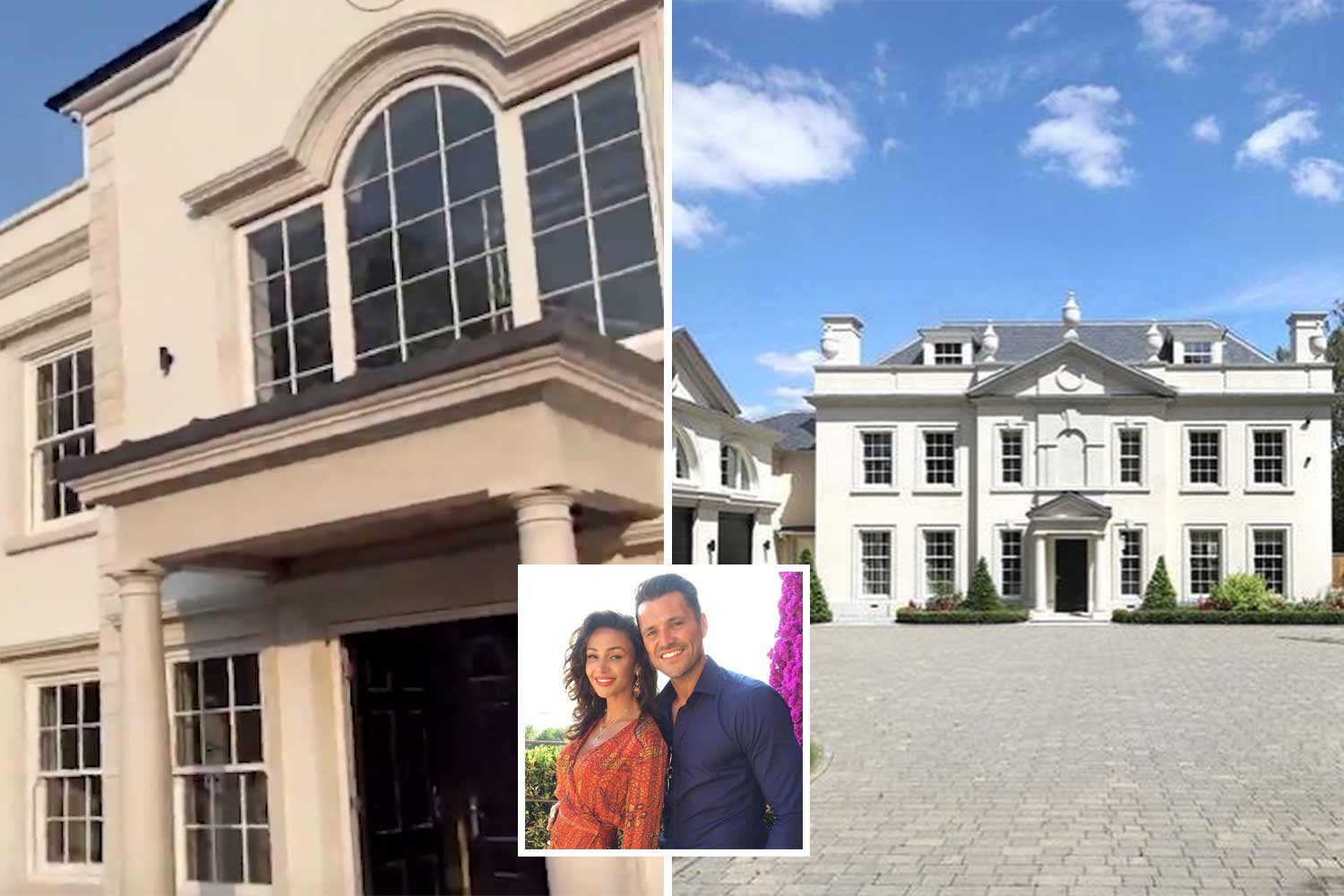 Mark & Michelle show off epic '£3.5m mega-mansion' as they prepare to move in

Clem first started sharing the pictures to his mates after being shocked at the meals his mum served up.

"I've been sending them in for ages as a laugh to see their reaction," he said.

"I hate cooking it’s just too much effort for five minutes to eat. I live with my mum so she cooks.

"All my mates have been laughing for ages. I didn’t think it’d go viral on Twitter though."

The football fan has now rushed to defend his mum's egg and chips – but admits pie and crackers wasn't quite Michelin-star standard.

Clem said: "The reaction online's been funny. At first I tried to keep it anonymous but loads of people worked out it was me.

"I reckon chip and eggs isn’t even that bad. Pie and crackers was definitely a low.

One of Owen's comments reads: "Without doubt the single worst meal I have EVER seen consumed, there are starving refugees who would turn their nose up at this, the bacon was also cooked in the microwave. 0/10"

Another says: "This is supposed to be a fajita, the block of what looks like butter is a solid block of cheese and yes they are baked beans. 2.5/10"

Although he was in on the joke, Clem kindly tweeted asking those who laughed at his pictures to donate to a food bank – admitting his 'scran's s**t' but he was lucky to eat.

Clem tweeted: "Now you've all had your laugh, can I be serious? Ye my scran's s**t but I’ve got something on my plate.

"Loads of people don’t. Put your money where your mouth is and support your local foodbank which you can find here."

"Looking at those images has given me gout," she said.

Tommy Millar said: "BEIGE PLATES. Why is there SO MUCH STARCH."

Another added: "Dunno whether to laugh or boak. What is wrong with ur pal, have eaten better food in hospital ffs." 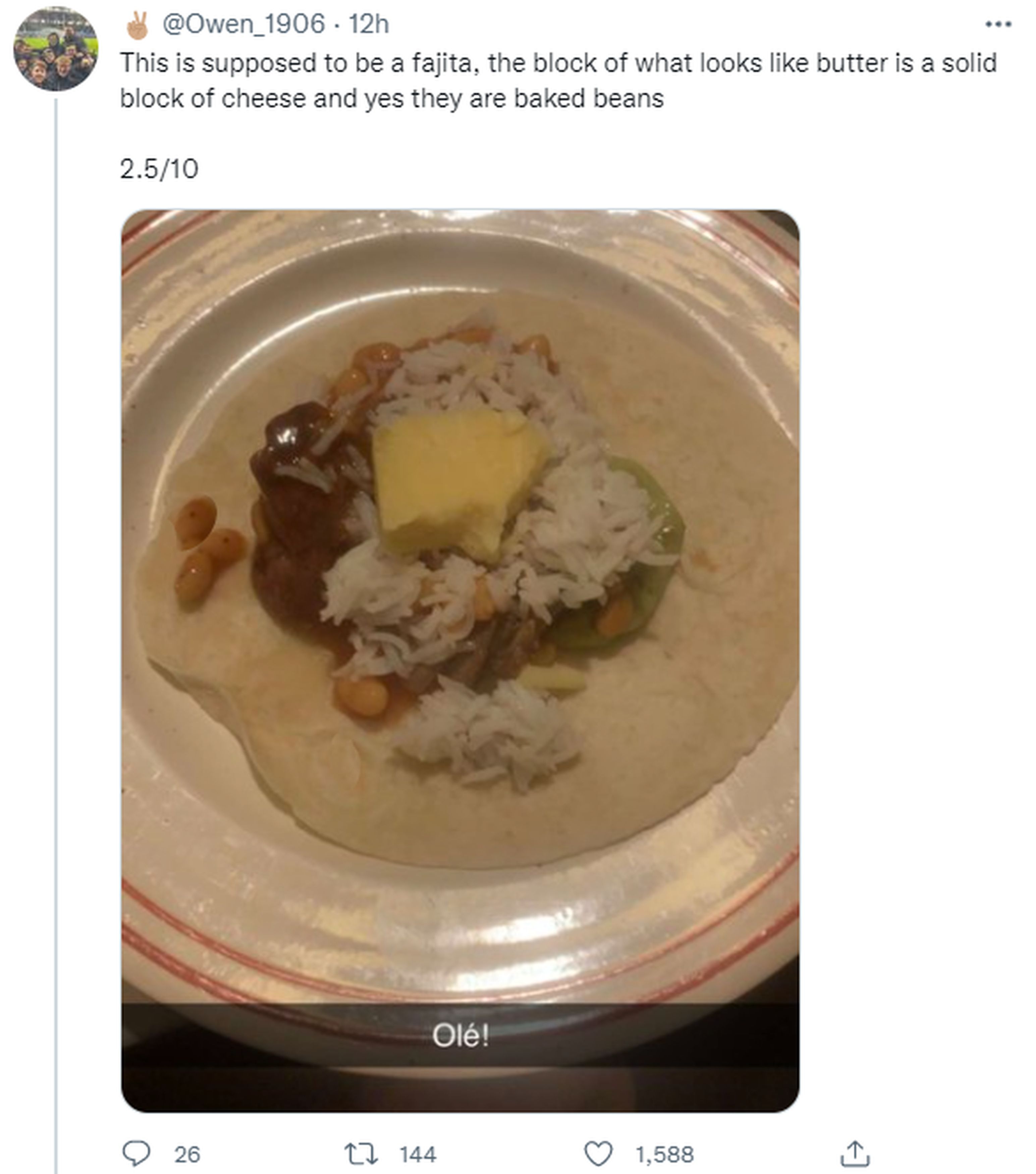 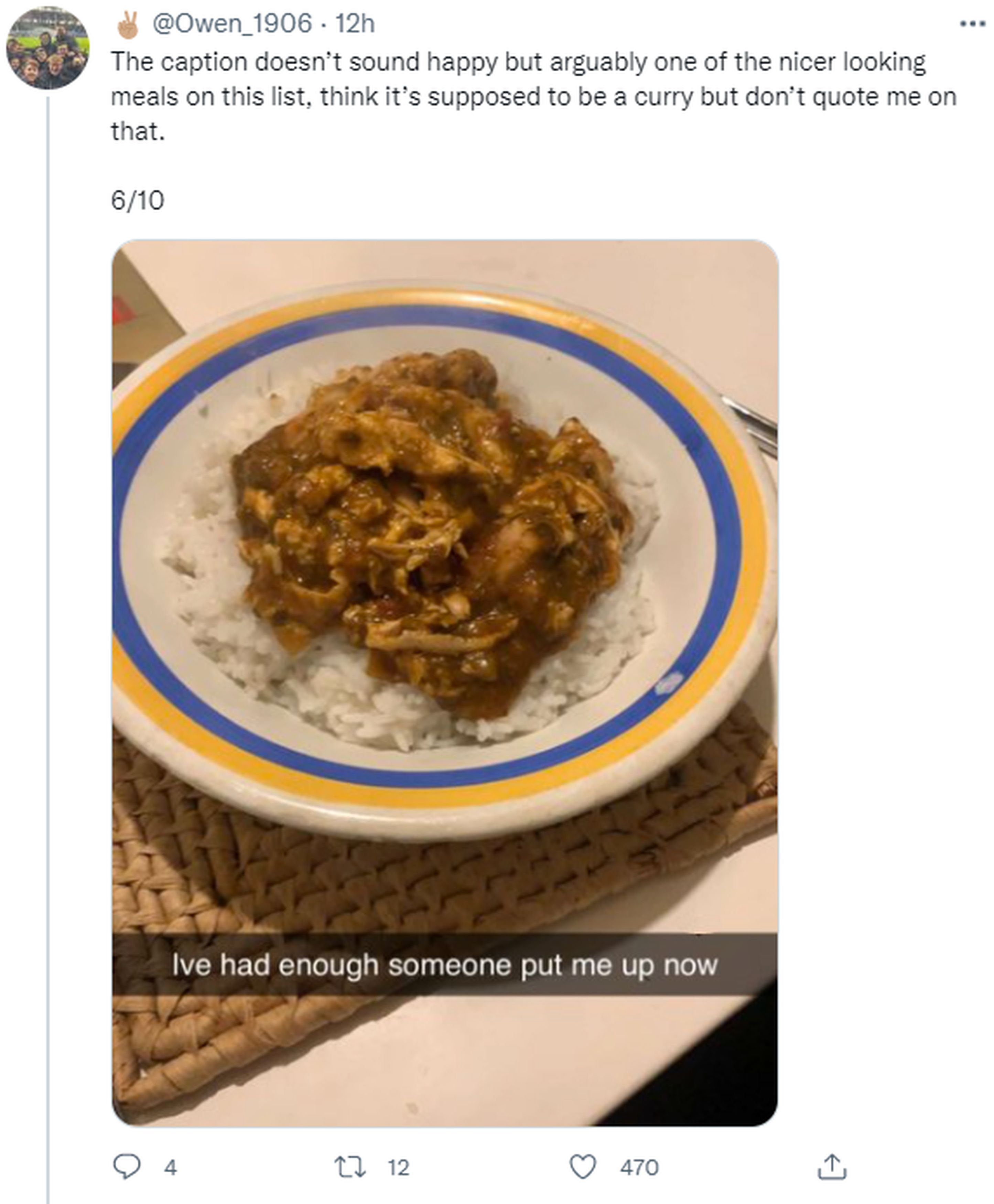 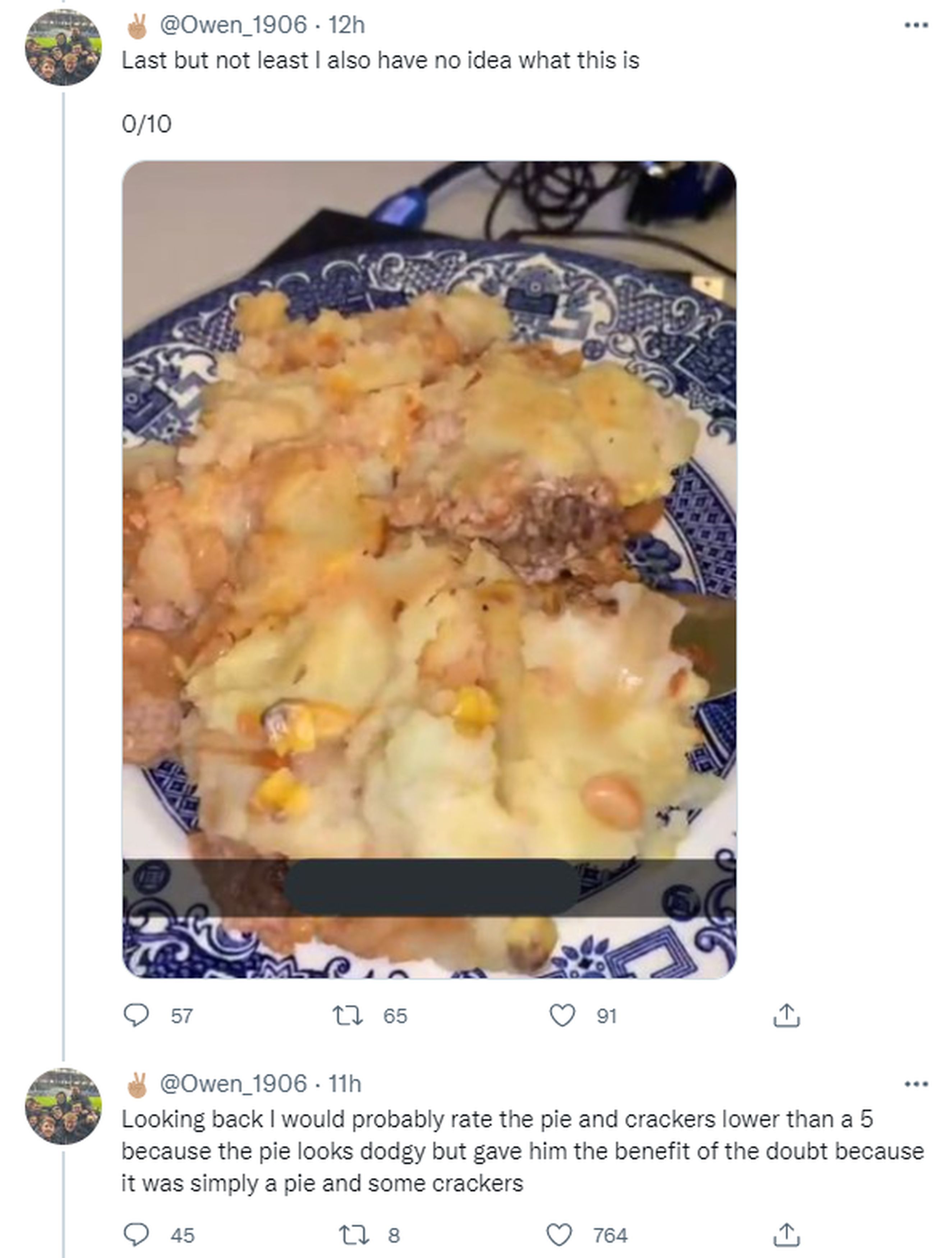 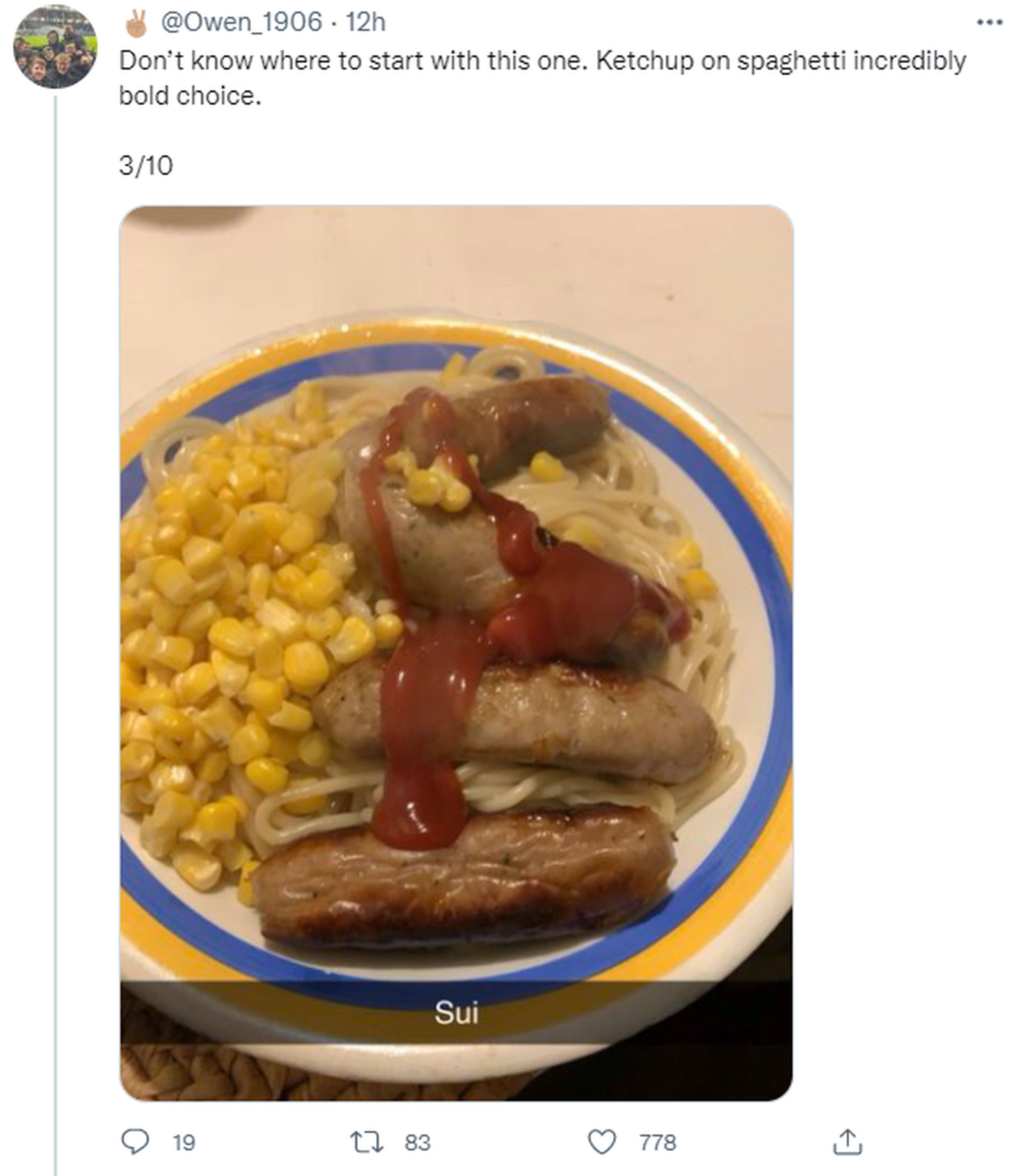