ONE of the UK's longest-suffering coronavirus patients has been discharged from hospital after 149 days. 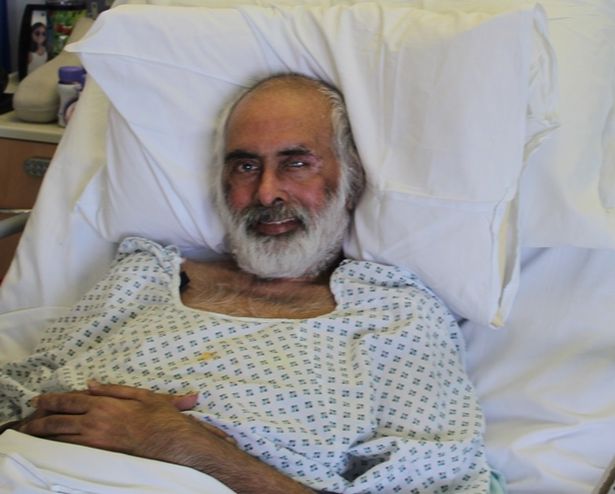 The dad was hospitalised at King George Hospital in Ilford back in May after he collapsed at his home in Chadwell Heath, Dagenham.

The building manager spent 149 days under the care of Intensive Care medics, during which times he was sedated for two months.

He is now being moved to a residential rehabilitation centre to continue his recovery, as he describes being "on the up all the time".

Mr Patel, who is a dad to grown up daughters Aneeka, 28, and Nikeeta, 27, says he cannot remember much from the fateful day of his collapse.

Beyond one of his daughters calling an ambulance for him, his mind is blank, he said.

Mr Patel, who is married to wife Darshee, said he initially felt "quite angry" following his coronavirus diagnosis and being stuck in hospital.

The 63-year-old admitted he sometimes took his anger out on people, but said he always apologised too.

With both his daughter's birthdays coming up next month he is desperate to get home in time to celebrate.

Mr Patel said: "“I’ve got a lovely family and I just want to get home to them."

Although the family have been keeping in touch via video-call, he has only seen them once in person.

He describes the moment they were allowed to meet as "very emotional".

Mr Patel said the thing that got him through the months in hospital was thoughts of his family, his nieces and his nephews.

The 63-year-old – who celebrated his birthday from his hospital bed – also said chats with staff and other patients got him through.

But he insisted one highlight of his time at King George was staff making a fuss of him on his birthday.

Medics and other staff got him a cake and a card and sung happy birthday to him, which lifted his spirits.

Mr Patel is now urging everyone to take coronavirus precautions seriously, wear a mask and follow the rules.

The building manager added it "really annoyed" him when people flouted important lockdown measures, in place to stop the spread of the virus.

He said: "They would change their minds if they saw people like me suffering.”

His recovery follows a "miracle" patient in Scotland who spent a whopping 172 days in ICU.

Brian Mearns, 63, got a standing ovation from medics as he left the unit in Edinburgh, Scotland.

And Kate Garraway's husband, Derek Draper, is still battling for his health after spending 190 days in hospital thus far.

Related posts:
October 5, 2020 World News Comments Off on Dad, 63, who is one of UK's longest suffering coronavirus patients leaves hospital after 149 days
Celebrity News:
Olivia Jade on YouTube Return After College Bribery Scandal: I Just Want to Do What I Love
Jessica Mulroney Shares Text Messages with Sasha Exeter to Exonerate Herself After Last Year’s Controversy
Dolly Parton Mourns Passing of Brother Randy Two Days After Her Birthday
'RHOC’ Star Shannon Beador Says She Got Bad Cosmetic Work
Bridgerton's diverse cast was found using an 'inclusion lens'
Recent Posts
This website uses cookies to improve your user experience and to provide you with advertisements that are relevant to your interests. By continuing to browse the site you are agreeing to our use of cookies.Ok