Heartbroken daughter shares final photograph of her ‘talking and joking’ mother, 75, just hours before she took a turn for the worse and died of coronavirus in warning to others

A woman has shared a final photo of her mother, who died from Covid-19 in hospital, in a bid to warn others of the real dangers of the disease.

Joan Wright, 75, died in Furness General hospital in Cumbria last week, with her husband, who is still in hospital with the virus, holding her hand and with family members by her side.

Her daughter Deborah Buchanan, from Newtownabbey in County Antrim said her mother asked her take the photo shortly before she passed away. 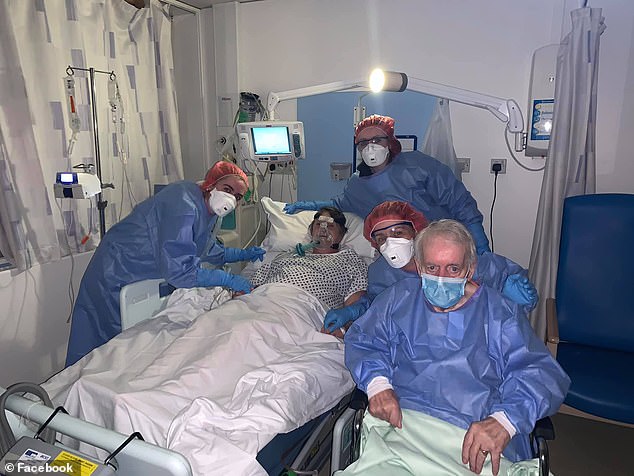 The final photo of Joan Wright, 75, who died in Furness General hospital in Cumbria last week. Her family and her husband are pictured in PPE

It shows Mrs Wright bed bound, with her husband, Ms Buchanan’s father and other family members, all dressed in PPE.

In a Facebook post, Ms Buchanan, said: ‘This is the reality of Coronavirus. Wake up and wise up. This is not going away anytime soon and more and more people are going to die. Don’t let it be your parent or grandparent or any member of your family who ends up like this. Stay away from those you love, and protect yourselves and them.’

She said that both of her parents had tested positive for COVID-19 on 27 April after being admitted to hospital. Ms Buchanan had travelled to the hospital after she was requested to attend and said her mother, who was on a ventilator, was in good spirits at the outset and was ‘happy, talking and joking.’ 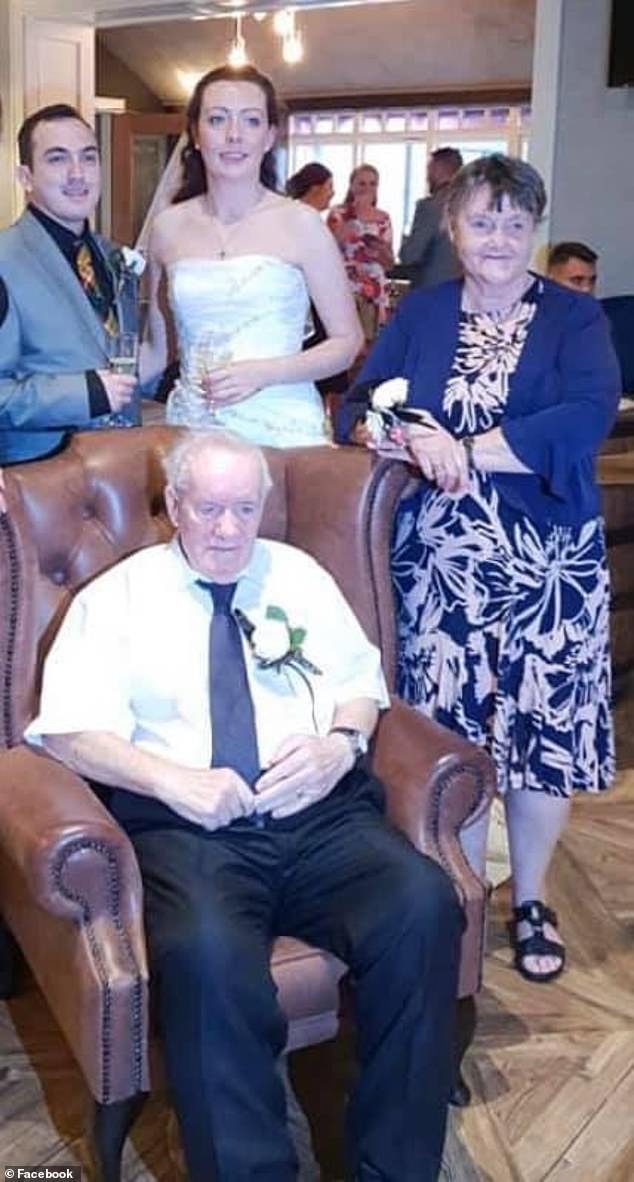 Speaking to Northern Ireland’s Sunday Life newspaper, Ms Buchanan said that her mother and father (pictured), who had been together more than 50 years, had moved to Cumbria 15 years ago to retire

However, several hours later, her mother’s condition deteriorated and family members returned to the hospital where she died a short time later.

‘We had to watch her gasp her last breaths and slip away in agony. My dad says this is the worst thing he has ever felt in his life, he fears going to sleep incase he doesn’t wake up. They hadn’t left the house in weeks but still picked this up and both took very unwell. My dad is still in hospital and not out of the woods yet, his heart is broken and he has to continue to fight to try and beat this.’

Ms Buchanan said they were lucky to be there when her mother passed away but has issued an impassioned plea for people to stay at home.

‘Please, stay at home, please do not go through the heartache we have had to. Ours isn’t over yet.’

Speaking to Northern Ireland’s Sunday Life newspaper, Ms Buchanan said that her mother and father, who had been together more than 50 years, had moved to Cumbria 15 years ago to retire.

*I want to add that although my parents did not leave the house in weeks, they did have care workers and medical professionals coming into their home. So many people are asking how it’s possible when they didn’t leave, anything is possible with this virus,* Ms Buchanan added at the bottom of her post.