Armed with a bag of knives, would-be killer Mohammed Ibrahim roamed a Broadmeadows shopping centre to try on shoes.

He selected a black pair of size-10 men’s Skechers, placing his cache of weapons on the counter top before paying in cash and casually strolling through a sunny courtyard to catch a train to Melbourne. 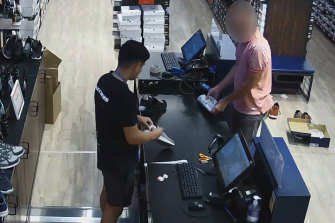 Mohammed Ibrahim, face blurred, visits the Broadmeadows shopping centre on the afternoon of March 10, 2020, before his killing spree. He is seen with a white plastic bag police believe had knives inside.

Within hours three people, including Ibrahim, were dead and two others seriously injured, after the 34-year-old father from the city’s north travelled to Hawthorn and then Kew to kill two strangers, Sally-Anne Wills and Christopher Polden, on March 10 and 11 last year.

“I heard someone say something so I turned around. I saw the male’s hand move and hit me in the right side of my jaw, a knife in his right hand. I felt blood running down my neck as we ran,” Protective Services Officer Josh Davies said.

Chilling details and CCTV footage of Ibrahim’s actions were aired in the Coroner’s Court of Victoria for the first time on Tuesday as part of a summary inquest into his attacks.

The coroner was told no motive had been established for the slayings other than two poorly written notes found in Ibrahim’s wallet that revealed he believed people had been sent to assassinate him.

“The events of that evening could not have been predicted,” counsel assisting the coroner Lindsay Spence submitted. “The perpetrator’s actions were unforseeable.”

Ashlee Gunstone suffered six stab wounds, including two to the neck, as she tried to protect Ms Wills with her body and spent 12 days in hospital recovering from her injuries. 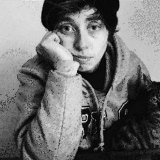 Sally-Anne Wills, known to her family as Sals, was killed on March 11, 2020.Credit: Supplied

In an emotional statement read out to the inquest, Ms Gunstone thanked the first responders and neighbours who attended the scene and tried to save her partner Ms Wills.

“To the first responders who did everything they could for Sals … to our heroic neighbours who came down to help us … to the police officers who were there for us … thank you,” Ms Gunstone said.

“And to the paramedics who attended to me, and especially to Jake who courageously told me that Sals didn’t make it, thank you for being so brave in the worst moment of my life.

“To all of you, you are truly remarkable. Your bravery and compassion I’ll forever hold in my heart. The evil we faced that night is a horror I still cannot comprehend.”

CCTV captured Ibrahim at Broadmeadows shopping centre from 4.45pm before he got on a train to Southern Cross station at 5.25pm. Footage shows him carrying a white package in his hand which investigators told the coroner they believe contained three knives Ibrahim would later use on his victims.

At 6.25pm he walked through South Wharf and CBD streets for almost four hours before approaching PSOs Mr Davies and Jamie Radovanovich at Jolimont Station. 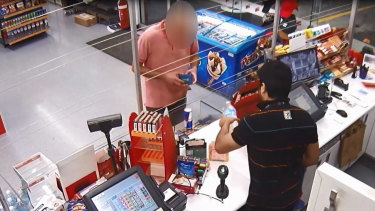 Mohammed Ibrahim at a 7-Eleven store in Kew in the minutes after he stabbed a PSO, a Hawthorn woman and killed Sally-Anne Wills on March 10, 2020.

The inquest heard four minutes later, two heavily armed police units from the Critical Incident Response Unit stumbled across Ibrahim nearby where he was fatally shot three times after lunging at officers with a knife.

During the one-day summary inquest, Ms Wills was remembered as a mix of clever and creative, a technically-minded music lover, who’d gathered with her friends and family just five days earlier to celebrate her 30th birthday. 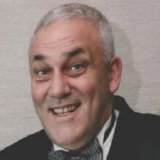 Chris Polden was killed in the attack in March 2020.Credit:

Mr Polden, the coroner heard, grew up in Tasmania with his adoptive family of seven siblings before moving to Victoria where he became a highly respected HIV advocate, volunteering on numerous boards and helping to obtain homes for other HIV-positive people.

His friends said Mr Polden was a proud gay man and was known to help organise large dance parties at Festival Hall while working part-time to help manage his health.

“He was always willing to help others in need,” one friend said.

The inquest heard Ibrahim came to Australia from Iraq as a refugee alongside his parents and six siblings. He never held down employment in Australia and his ex-wife revealed he was a violent man who wed her in an arranged marriage.

The inquest was told Ibrahim had five interactions with Victoria Police in the years before his death, reporting to Craigieburn police station that he believed people were out to kill him.

The coroner will hand down her findings at a later date. 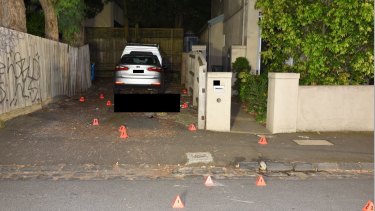 Ibrahim was later shot dead by police in a Kew driveway.