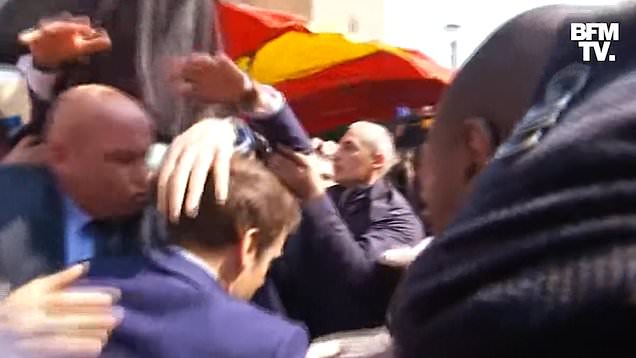 The French President has been pelted with tomatoes days after being re-elected.

Emmanuel Macron appeared to narrowly avoid being hit at a small market northwest of Paris.

That was partly thanks to the use of an £8,000 Kevlar umbrella, reports say.

A small bag of cherry tomatoes flew over Mr Macron’s head and landed on a man to his left as the President waded through a boisterous crowd.

They bounced off the shoulder and arm of two men beside him, before bodyguards try to protect the French President and a woman screams in the melee, broadcaster BFM-TV’s video shows.

Mr Macron, 44, seemed oblivious to the near-miss until someone in the crowd shouted ‘projectile’ and bodyguards raised arms over the French leader’s head to cover him.

Someone then unfurled a partly broken black umbrella to shield him, and his security detail steered him to cover under a nearby market-stall parasol.

The special umbrella – known as the paraPactum – can withstand attacks by knives or dogs, according to its designers, the Daily Telegraph reported.

It added that the device costs around £8,400, comes in a secure black briefcase and has been tested to withstand acid attacks.

The president sheltered under it for a few moments before waiting under the market stall until things calmed down.

Mr Macron, who was making his first public appearance since his re-election victory over far-right candidate Marine Le Pen on Sunday, has been criticised as an out-of-touch ‘President of the rich’.

Macron comfortably beat Ms Le Pen in Sunday’s election runoff and is now looking to maintain his party’s majority in the lower house of parliament.

Get in touch with our news team by emailing us at [email protected].