Estate agents get staff back to work to cope with 28% rise in lettings requests since start of lockdown – while London faces 10% house price slump this year bringing average to value to £435,529

Estate agents are beginning to bring staff back to work as people become desperate to move house – as London faces a potential 10 per cent slump in house prices.

Chestertons has returned some of its lettings staff after seeing a 28% increase in requests to view its rental properties as Britons start thinking about moving when lockdown ends.

Staff at the London agency are still working from home but have been taken off furlough to deal with the high volume of new tenants registering and demand for virtual viewings. Its sales leads have also increased by around 17% over the same period.

It comes as Savills predicts that the coronavirus crisis could mean a drop in London house values of up to 10 per cent, bringing the average price from £483,922 down to £435,529, Homes & Property reports.

Research by the publication shows house prices in six of the capital’s boroughs could drop beneath the £483,922 average. 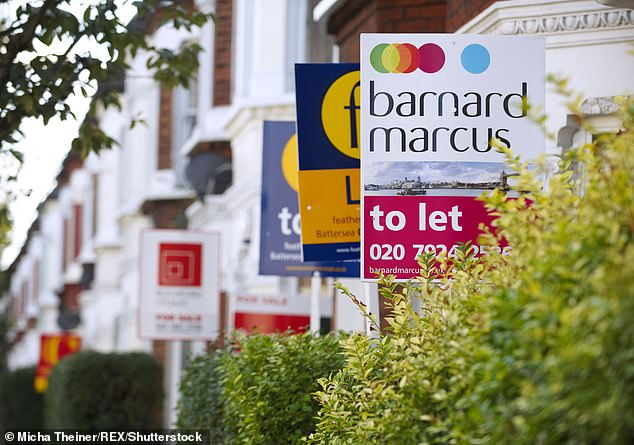 Research shows house prices in six of the capital’s boroughs could drop beneath the £483,922 average (stock image)

Barnet, Brent, Lambeth, Merton, Kingston upon Thames and Southwark could see prices plummet beneath the threshold.

As physical home viewing goes against social distancing measures, valuations have been cancelled and several high loan-to-value mortgage products have been withdrawn as the second-hand property market faces growing challenges.

SIX BOROUGHS FACING A DROP TO BELOW AVERAGE PRICES IN LONDON

Data from December shows an average London price of £483,922 seen last December, to below it.

If the coronavirus crisis sparks a drop in house prices of 10 per cent, as has been predicted, then several boroughs face dipping beneath the average.

He added that the introduction of an additional three per cent stamp duty on second homes has acted as a deterrent to investors who would bid on new-build blocks.

Chairman of Dexters estate agents Jeff Doble told MailOnline business levels had increased ‘four-fold in the past fortnight’ with more than 100 new lettings each week, having established ‘Covid-safe protocols’.

Mr Agace added that they were seeing ‘very low’ fall-through rates on sales since lockdown – lower than the same period last year.

‘We believe there is significant pent-up demand which will be released once the lockdown is lifted,’ he added.

‘Mortgage rates are at record lows and we believe there is a real desire by people keen to move on to the next stage in their lives.’

In other revelations in lockdown Britain:

Chestertons Managing Director Guy Gittins said: ‘We are of course very keen to get as many of our staff back to work as soon as possible and have been monitoring interest and activity levels on a daily basis to calculate when this might be possible.

‘Activity levels are understandably higher in lettings and we have therefore started the phased return of staff, beginning with lettings negotiators in areas of especially high demand, including Fulham, Islington and South Kensington.

‘We hope to bring more back over the coming weeks in anticipation of a very busy summer for lettings.’

Amazingly, the estate agent has still managed to see through 40 exchanges in the past five weeks.

‘Sales activity has also been considerably higher than we anticipated at the start of lock-down,’ he went on.

‘Enquiries are increasing every week, but while viewings are still restricted to video viewings only, we are focusing on progressing our large pipeline of agreed sales as quickly and smoothly as possible for our clients.’

Richard Davies, Head of Lettings, added: ‘There has been a steady flow of new tenants registering and doing virtual viewing with us in the weeks since lock-down, but over the past week there has definitely been a sharp uplift in the number of enquiries and the number of tenancies which we have been able to agree.

‘We have also noticed an increased sense of urgency from the tenants, many of whom are keen to make offers and move as soon as possible, but mindful of following government guidance regarding home moves.

‘It is also clear that more landlords are now bringing their properties to the market, or at least preparing to do so, as we witnessed a 28% increase in virtual market appraisals and a 24% increase in lettings instructions in the third week of April, compared to the second week.’

The government has warned people that there is no need to pull out of house sales during the coronavirus outbreak.

It said where homes are empty, moves could go ahead as normal, but when they are occupied, alternative moving dates should be sought.