An EU official has tested positive for coronavirus in Brussels after returning from Italy, it emerged today, in the first case to strike the bloc’s institutions.

‘We have confirmation of the case,’ European Commission spokeswoman Dana Spinant said.

Meetings at the headquarters of the Brussels-based EDA have been cancelled until March 13, officials said. 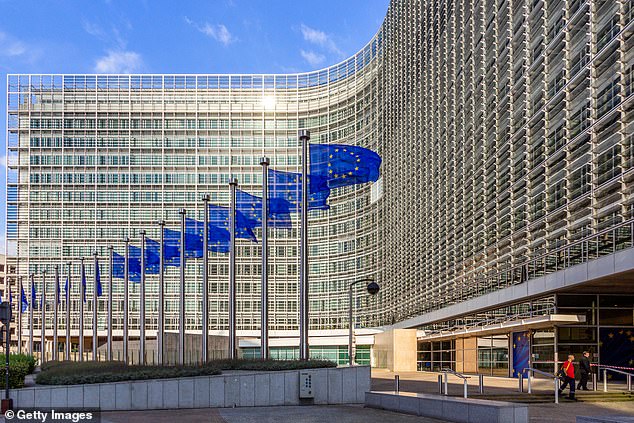 An EU official has tested positive for coronavirus in Brussels, a spokeswoman said today, in the first case to strike the bloc’s authorities (file photo)

EDA spokeswoman Elisabeth Schoeffmann denied a report that the man had attended a four-hour meeting with 30 other officials before he was diagnosed.

The report by Euractiv had claimed that one of those other officials was already being tested for coronavirus.

The European Parliament has already limited public access to its buildings in Brussels and Strasbourg, amid fears that large gatherings could hasten the spread of the global outbreak.

Belgium has confirmed 13 cases of the virus so far. Belgian media today reported the first case which had been transmitted on Belgian soil, rather than brought home from abroad.

‘In other words, the virus continues to spread,’ she told reporters.

To coordinate the EU reaction to the outbreak, EU health ministers will gather in Brussels on Friday for an extraordinary meeting, the second this year to address the coronavirus crisis.

The health council could be held in parallel with an extraordinary meeting of EU migration ministers, an official said.

EU experts have so far agreed that turning people potentially infected with the virus back at borders could help spread the disease, but this position is subject to weekly reviews.

Closing Schengen’s internal borders on health grounds would be unprecedented.