The grand reunion: It’s the moment so many lonely grandparents have longed for — and here five families share the stories behind their magical hugs of love

For more than three months they have been kept apart by strict lockdown rules, unable to share a cherished hug even on special birthdays. But this weekend, to the delight of many families, adults living on their own have been allowed to mix with one other household in a ‘social bubble’. It means that — finally — widowed or other single grandparents can see and socialise with children and grandchildren again.

Here, five families who met up this weekend tell JILL FOSTER what their grand reunion means to them.

William McCusker, 77, a retired Army mechanic, was reunited with his daughter Helen Best, 37, a book publicist, and granddaughter Sienna, five, at his home near Guildford, Surrey.

William says: ‘Lockdown has been very boring but I’m feeling so much better now that I’ve had a big cuddle with my daughter and granddaughter. I’ve tried to keep myself busy with gardening and watching movies. I’ve kept in touch with my family through Skype, too, but it’s not the same. 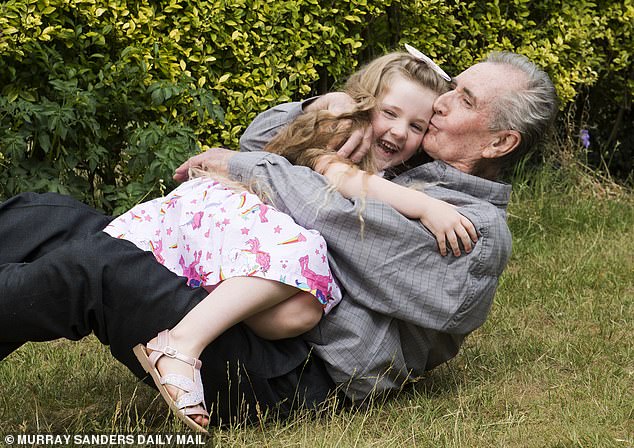 William McCusker (pictured), 77, a retired Army mechanic, was reunited with his daughter Helen Best, 37, a book publicist, and granddaughter Sienna (pictured), five, at his home near Guildford, Surrey

‘I’ve not been out of the house much because I don’t like the thought of wearing a mask.

‘I’m close to all my five children but it’s sensible for me to be in a social bubble with Helen and Sienna as they live closest. Being reunited makes me feel like life is slowly returning to normal and that’s wonderful.

HELEN SAYS: ‘My mum passed away in November 2016 so Dad’s been on his own since then and visits from Sienna have kept him going. They’re so close and have a really special relationship, so when lockdown happened and we were all separated, that was tough.

‘As a single mother, it’s been hard for me, too. I’ve not been working because I’ve been home-schooling Sienna and I’ve really missed having Dad around.

‘It’s been lovely to see him again properly and we’ve all had a big hug.’

A cuddle after all this time IS WONDERFUL

Dave says: ‘It has been really tough not being able to give my only grandson a cuddle — what we called ‘a Roman squeeze’ — during lockdown. I love him to bits and I’ve seen him once or twice a week on WhatsApp calls and probably five or six times through the window of either my house or Emily-Rose’s flat.

‘On his third birthday recently I called around with his presents and we waved to each other and I said to him: “Do you understand why you can’t cuddle Grandad?” He said: “Yes! Coronavirus!” so he understood something about what was going on but it must have been strange for him. 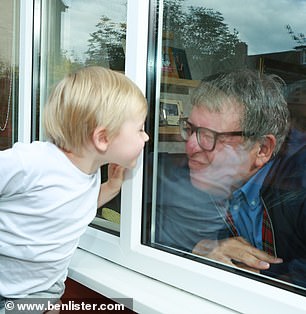 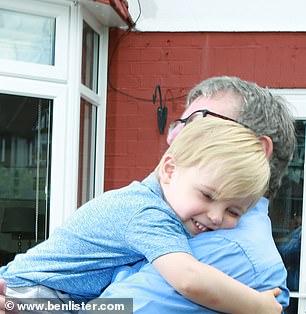 Dave says: ‘It has been really tough not being able to give my only grandson a cuddle — what we called ‘a Roman squeeze’ — during lockdown

‘Being able to cuddle both of them again properly has been wonderful. I’ve lived alone for so long that I’m pretty self-sufficient and enjoy my own company — but it’s not the same as being able to see your own family.

‘Roman loves his grandad and particularly loves my magic tricks. I make sweets appear from behind his ear but I didn’t have any on me at the weekend so I had to use coins! This visit has cost me £4 — but it’s worth every penny!’

Emily-Rose says: ‘It’s so weird but wonderful to be able to hug Dad again. Roman has missed him so much. Seeing them together again was lovely.’

A SLEEPOVER AT GRANNY’S — IT WAS the best news ever!

Maureen Nield, 73, lives alone in Inskip, Lancashire. She was reunited this weekend with granddaughter Jemima, ten. Maureen has two other grandchildren, Will, 17, and Jim, 14.

Maureen says: ‘I usually collect Jemima from school on a Wednesday and we bake cakes and watch TV together. She’s very tactile and likes to sit close to me when we watch TV.

‘Although I’ve been keeping in touch with my family on the phone and FaceTime, not being able to hug my grandchildren has been the hardest part of lockdown.

‘When the news came that we could form a support bubble with another household I was delighted. 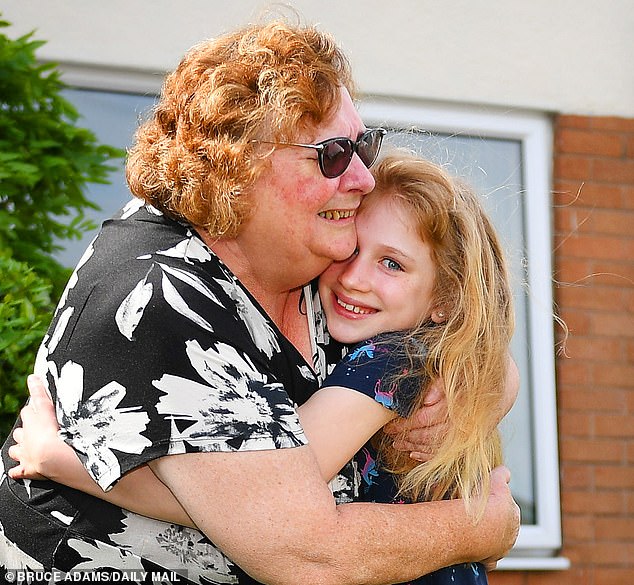 Maureen Nield (pictured), 73, lives alone in Inskip, Lancashire. She was reunited this weekend with granddaughter Jemima (pictured), ten. Maureen has two other grandchildren, Will, 17, and Jim, 14

‘Choosing between my grandchildren was difficult, and I felt awful leaving the others out — but the boys are a little bit more independent.

‘Jemima has been the one who seemed to be missing the family the most. She wrote me a letter last week, telling me how much she missed our Wednesday afternoons and was looking forward to the time we could be together again.

‘She was desperate to come for a sleepover, something she usually does once a month or so, but hasn’t been able to do since lockdown began.

‘When we got into the house I told her we were allowed to have a hug. She gave me the biggest cuddle and burst into tears. That set me off, too!

‘It was very emotional. I have missed all my grandchildren so much but this is the light at the end of the tunnel.’

jemima says: ‘Being able to go for a sleepover at Grandma’s was the best news ever. I was so excited.

‘I have missed my grandma so, so much.’

AT LAST WE CAN HUG OUR GRIEVING GREAT-GRANDAD AGAIN

Alf Smith, 86, is a retired council worker who lives near Southampton. He was reunited with his great-granddaughters Poppy-Olive, 15, Faythe, 13, Dixie, 12, and Elsie-May, 11, as well as granddaughter Tracey, 37, who runs a graphic design business.

Tracey says: ‘Being apart from my wonderful grandfather for the past few months has been incredibly difficult. He was widowed in December and had been married to my grandmother, Olive, for 64 years.

‘He has been grieving on his own since March and, although there are 21 of us in the family and we’ve done as much as we can to keep in touch, there have been quite a few tears from all of us. 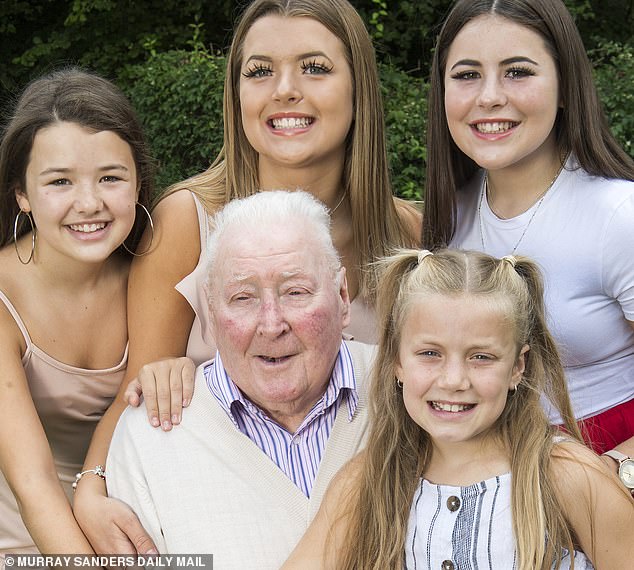 Alf Smith (pictured), 86, is a retired council worker who lives near Southampton. He was reunited with his great-granddaughters Poppy-Olive (second left), 15, Faythe (right), 13, Dixie (left), 12, and Elsie-May (front), 11, as well as granddaughter Tracey, 37, who runs a graphic design business

‘Before lockdown, we’d see him every day after I picked the girls up from school. But recently — because I’m home-schooling all four girls — we’ve only managed to see him three times a week and always at a safe social distance in the garden. We bought him an iPad during the first week of lockdown and had to teach him over the phone how to use it. My mum doesn’t live too far away from him and she has been delivering his morning papers. But it’s not the same as being able to go into his house and give him a hug.

‘Within minutes of the announcement that we could reunite, granddad had his bag packed to come and stay at our house! The girls are his absolute world and were jumping for joy when they heard he could come over. They baked him a cake and we took him to the seaside and had fish and chips. We’re overwhelmed to have him back.

Poppy-Olive says: ‘Being able to cuddle my great-grandad again is the best feeling ever. He always has so much fun with us, playing cricket and golf. We’re so happy to have him with us again.’

Alf says: ‘It’s so good to be able to see Tracey and my great-granddaughters properly again.’

MUM CAN NOW HELP US WITH CHILDCARE!

Alison Hayhurst, 72, is a retired magistrate from Harpenden, Herts. She was reunited with her granddaughters Florence, ten, and Isabella, six, and daughter Katie Clark, 41, a market researcher.

Alison says: ‘I’ve not stopped trembling since I’ve been reunited with my family and it’s a little overwhelming. I’m very happy but also still very worried about the virus.

‘I’ve found lockdown tough, particularly the sense of loneliness. I’d come to terms with being on my own since my husband died eight years ago but I’ve missed my family terribly. They’ve visited as often as possible — but stayed a good 10 ft away — and the girls have kept sending me paintings and messages. But it’s the physical contact I’ve missed.

‘I didn’t want to worry Katie because I know she and her husband are so busy with work. I’m very relieved to be with them again. 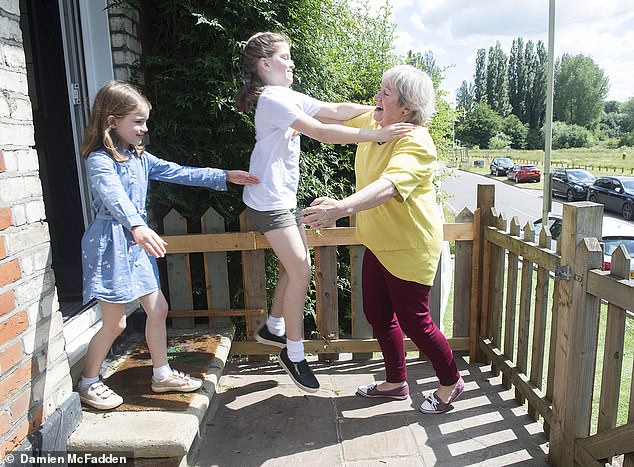 Alison Hayhurst (pictured), 72, is a retired magistrate from Harpenden, Herts. She was reunited with her granddaughters Florence (second left), ten, and Isabella (left), six, and daughter Katie Clark, 41, a market researcher 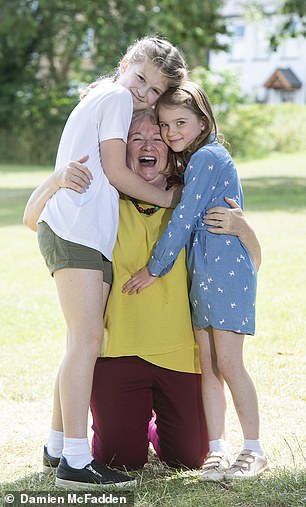 ‘I’ve found lockdown tough, particularly the sense of loneliness. I’d come to terms with being on my own since my husband died eight years ago but I’ve missed my family terribly’

‘We’ve kept in touch via Zoom and FaceTime but now I’m able to give them all hugs. The biggest challenge for me now will be to remember I’m not allowed to give other people hugs and that we still have to remain in this social bubble.

‘But I’m looking forward to being able to come to the house more and help out with the childcare. Granny School opens next week and we’ll be doing painting and reading — but we don’t particularly enjoy maths!

Katie says: ‘Mum moved from Southport, Merseyside, to a lovely flat in Harpenden only last year so she could be nearer to us. It was a big wrench for her leaving all her friends but we’re very close and it meant we would see her regularly. Then lockdown happened.

‘We’ve tried keeping in touch via Zoom but it’s been really hard to find much time because my husband and I have been working full-time, as well as home-schooling the girls. We’ve been to Mum’s flat a few times and spoken to her at a socially-safe distance. We visited her on Flo’s tenth birthday and she’s been in our garden a couple of times. But she’s found it tough, particularly if the girls tripped or hurt themselves and she couldn’t go over and hug them.

‘When the Prime Minister made the announcement about lockdown easing, the girls rang their grandma immediately. She hadn’t heard and had no idea they would be able to meet this weekend for hugs.

‘Now we’re back together and the girls are thrilled. They’ve given her so many squeezes and we’re all really relieved that not only can we see her properly but she can also come into the house. She’s been bored and lonely in her flat on her own and now she can come over whenever she likes. And it’s also wonderful that she can help out with childcare again!