An undersea volcano that erupted in Tonga, triggering a 7.4 magnitude earthquake, has sent tsunami waves crashing into the west coast of the US.

Waves of up to 4.1 feet were recorded in Port San Luis on Saturday, and tsunami-effect waves were recorded along the coast in California, Oregon, Washington, British Columbia, and Alaska.

Despite the dire warnings, spectators flocked to the beaches to view the surging tsunami waves, and surfers threw caution to the wind to catch the powerful waves generated by the surge.

Tsunami advisories were issued for Hawaii, Alaska and the U.S. Pacific coast.

The U.S. Geological Survey estimated the eruption caused the equivalent of magnitude 5.8 earthquake. Scientists said tsunamis generated by volcanoes rather than earthquakes are relatively rare.

The powerful waves registered in Japan, New Zealand and Australia, with a thunderous roar heard 6,000 miles away in Alaska. 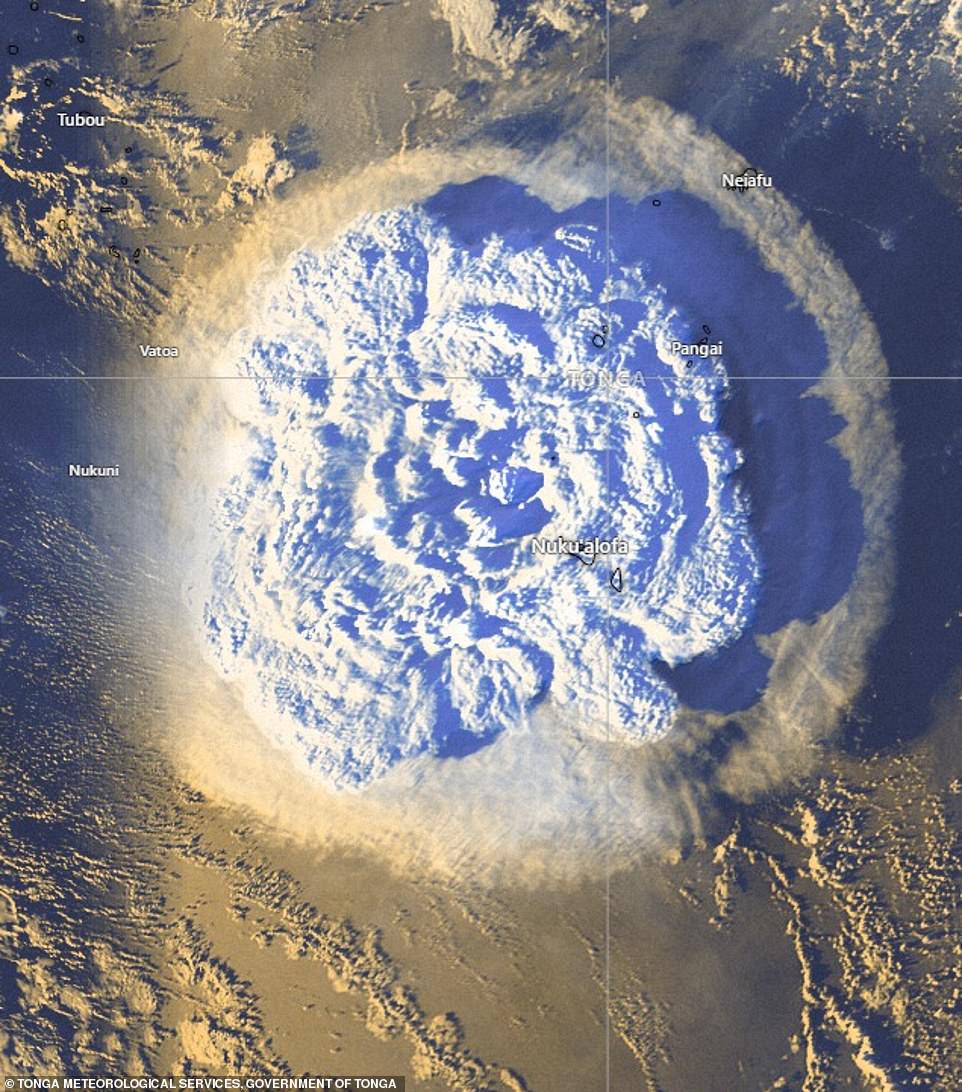 Dramatic official aerial maps showed the eruption cloud over Tonga after the Hunga-Tonga-Hunga-Ha’apai volcanco erupted (pictured, satellite images of the volanic eruption in the Pacific Ocean on Saturday)

Tonga volcano eruption as seen from Himawari-8 of the Japan Meteorological Agency. Hundreds of frightened Tongans fled to higher ground as the eruption triggered a tsunami in the island nation, with a four-foot wave observed in Tonga’s capital Nuku’alofa 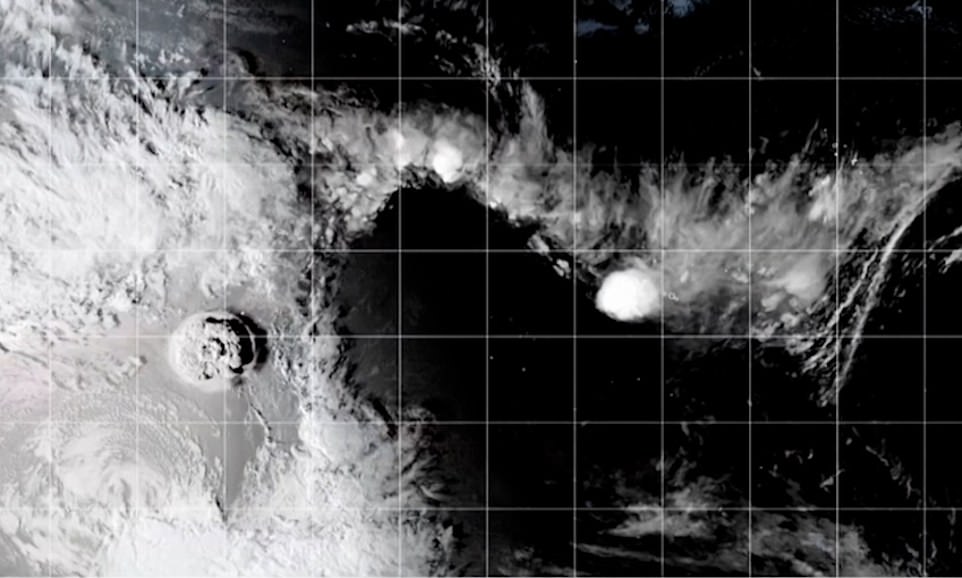 Pictured: Satellite imagery shows the underwater explosion (left). The images showed a 3 mile wide plume rising into the air to about 12 miles 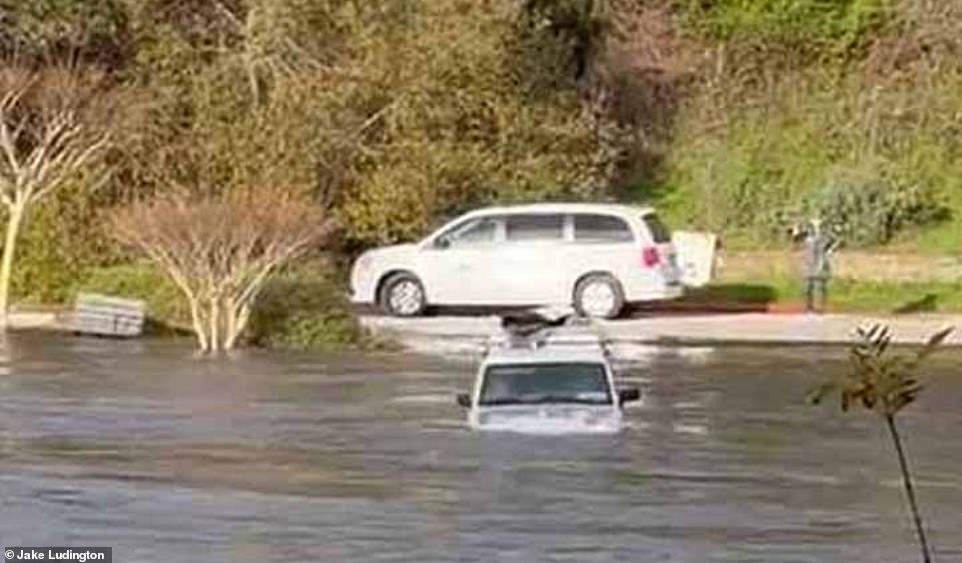 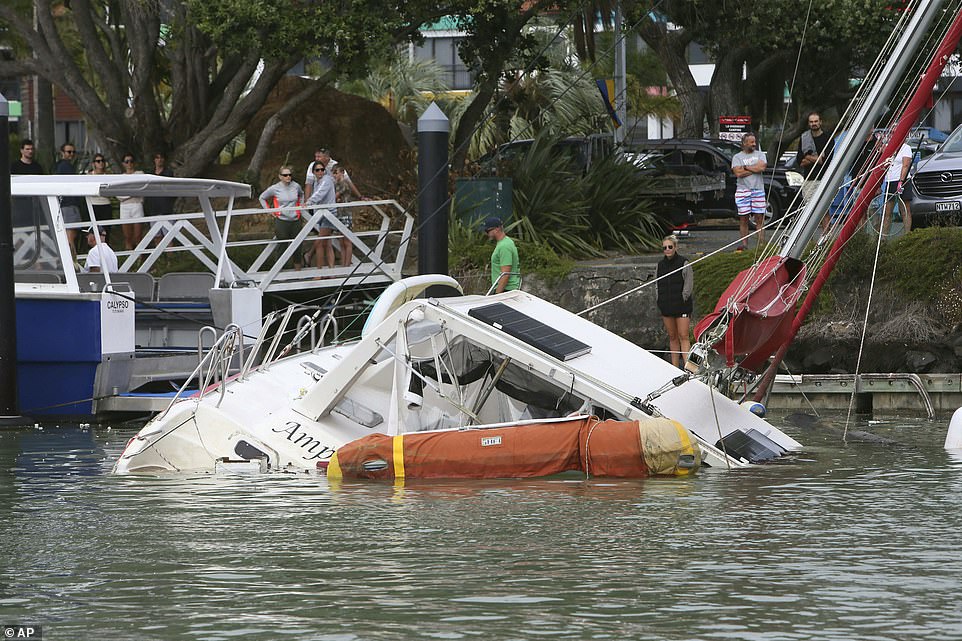 People look at a damaged boat in a marina at Tutukaka, New Zealand, after waves from a volcano eruption swept into the marina 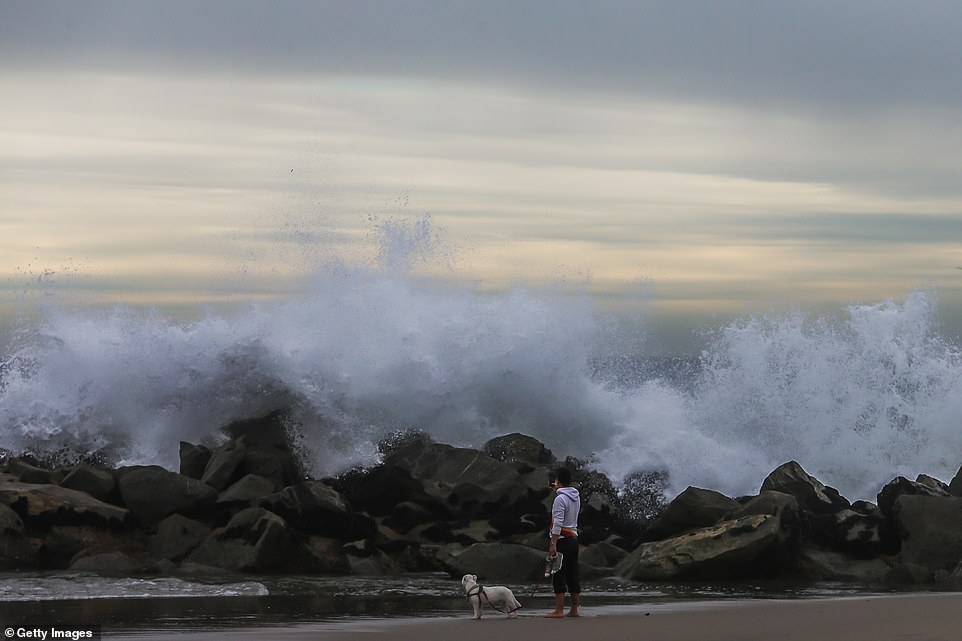 The eruption cut the internet to Tonga, leaving friends and family members around the world on Sunday still anxiously trying to get in touch to figure out if there were any injuries and the extent of the damage. Even government websites and other official sources remained without any updates.

Satellite images showed a huge eruption, with a plume of ash, steam and gas rising like a mushroom above the blue Pacific waters. A sonic boom could be heard as far away as Alaska.

The Tonga Meteorological Services said a tsunami warning was declared for all of the archipelago, and data from the Pacific tsunami center said waves of 2.7 feet were detected.

Rachel Afeaki-Taumoepeau, who chairs the New Zealand Tonga Business Council, said she hoped the relatively low level of the tsunami waves would have allowed most people to get to safety, although she worried about those living on islands closest to the volcano. She said she hadn’t yet been able to contact her friends and family in Tonga. 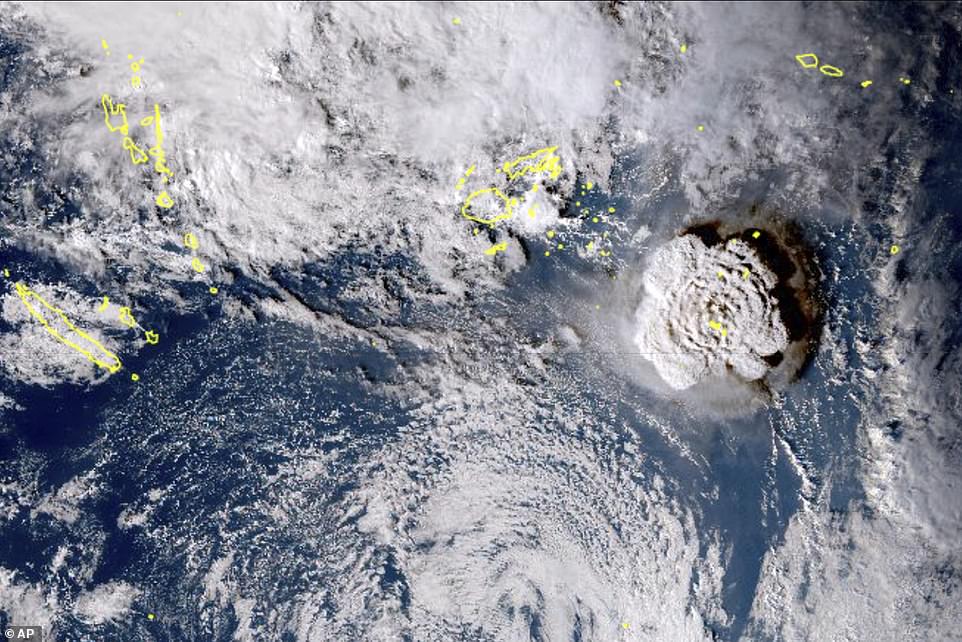 In this satellite image taken by Himawari-8, a Japanese weather satellite, and released by the agency, shows an undersea volcano eruption at the Pacific nation of Tonga Saturday 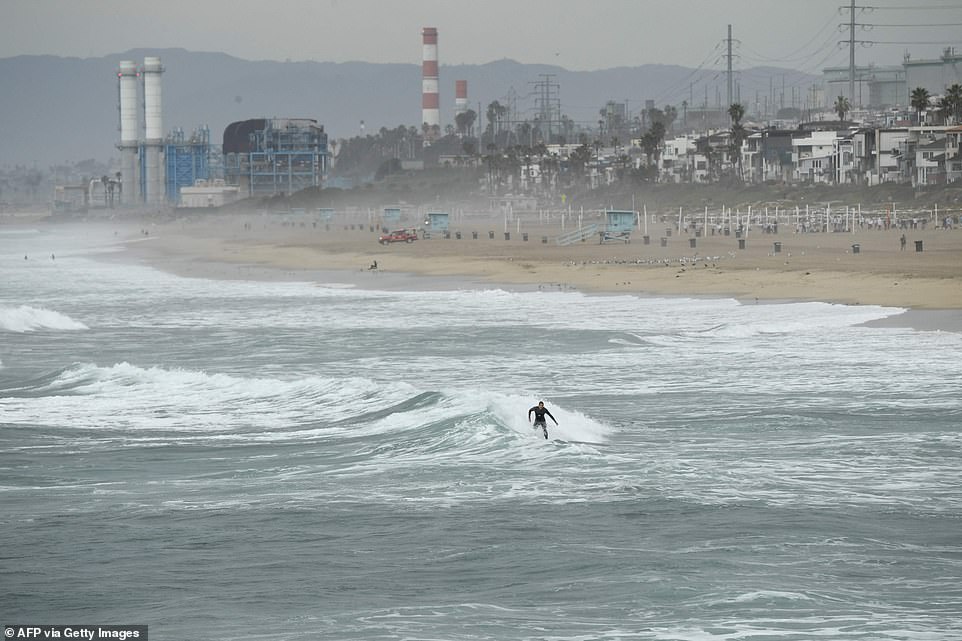 A surfer defies warnings to stay out of the water and catches a wave at Manhattan Beach in El Segundo, California Saturday 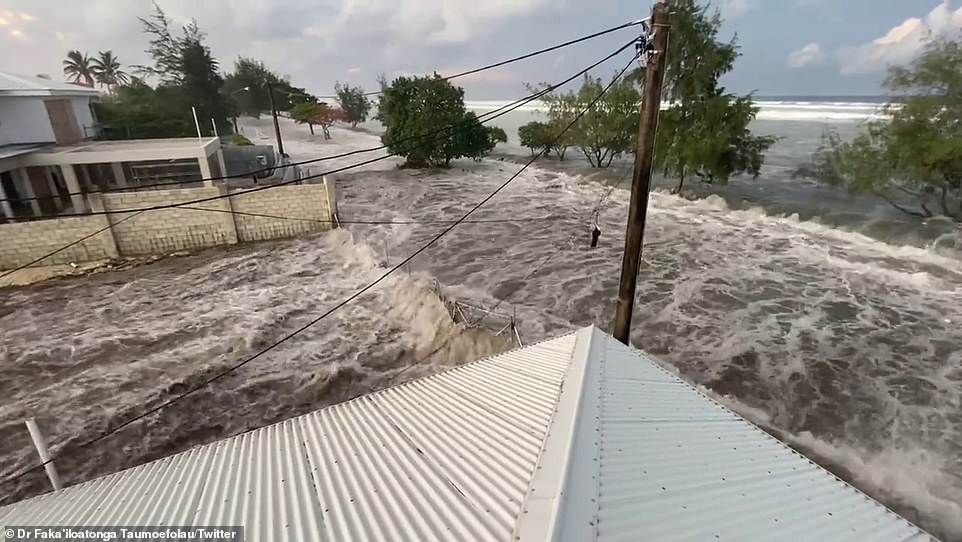 A tsunami has struck Tonga sending terrified locals fleeing for high ground as huge waves crashed over roads and into homes (pictured, tsunami waves begin to overwhelm coastal homes in Tonga on Saturday) 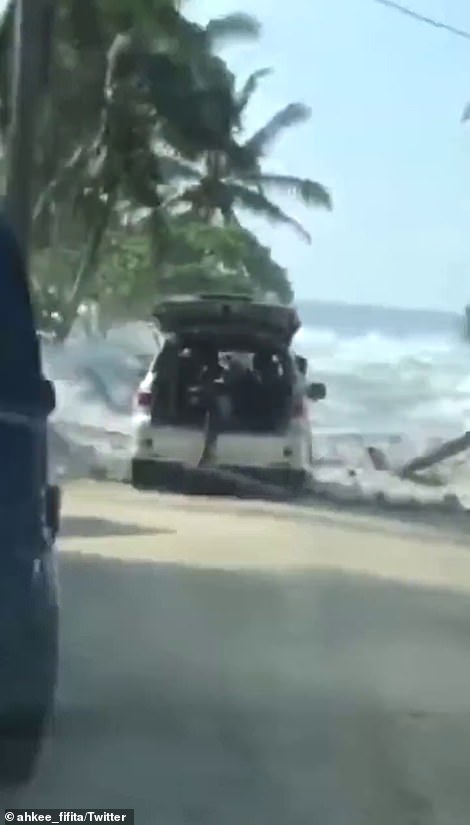 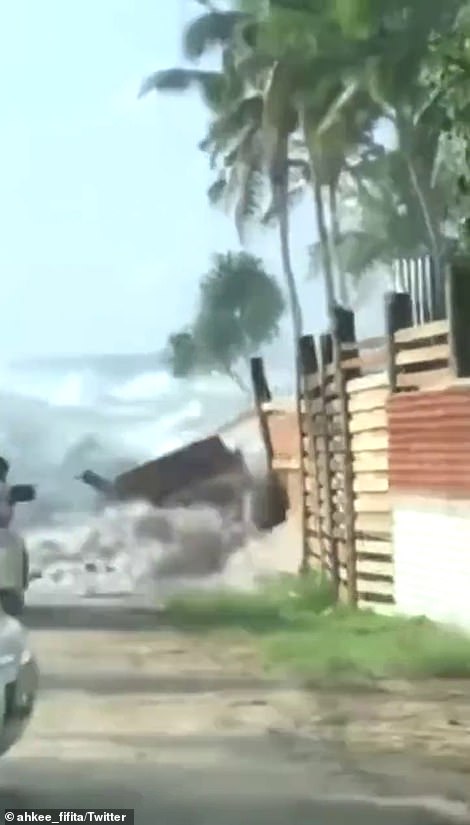 Locals took to social media to share dramatic videos of the surging waves making land and crashing through homes and cars (pictured, still images from video filmed in Tonga and posted to social media on Saturday) 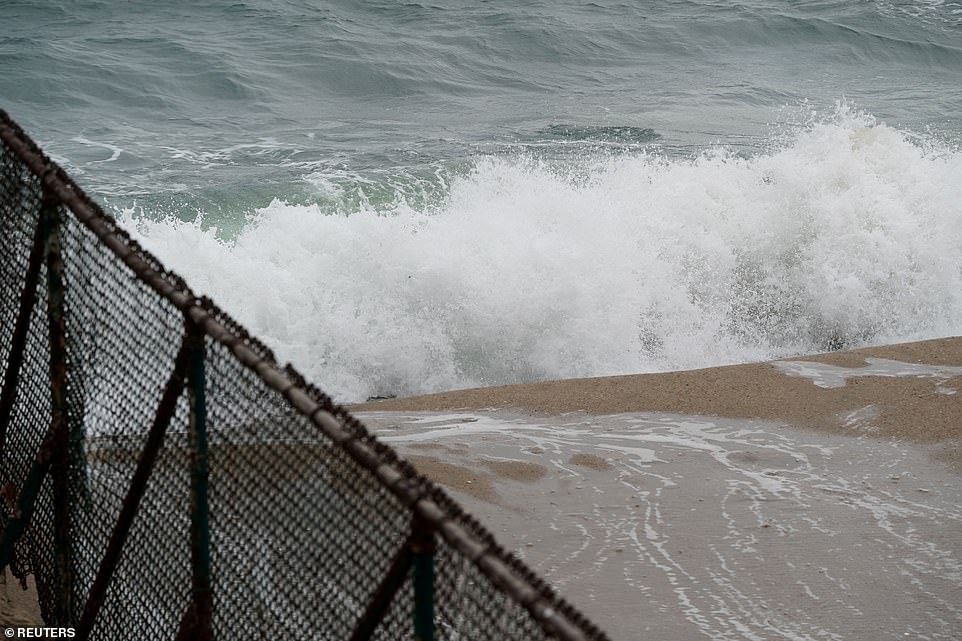 ‘We are praying that the damage is just to infrastructure and people were able to get to higher land,’ she said.

Tonga gets its internet via an undersea cable from Suva, Fiji, which presumably was damaged.

Southern Cross Cable Network, the company that manages the connection, does not know yet ‘if the cable is cut or just suffering power loss,’ chief technical officer Dean Veverka said.

The Fiji-based Islands Business news site reported that a convoy of police and military troops evacuated Tonga’s King Tupou VI from his palace near the shore. He was among the many residents who headed for higher ground.

On Tonga, home to about 105,000 people, video posted to social media showed large waves washing ashore in coastal areas, swirling around homes, a church and other buildings.

New Zealand’s military said it was monitoring the situation and remained on standby, ready to assist if asked.

In Hawaii, the Pacific Tsunami Warning Center reported waves that measured 1.6 feet in Nawiliwili, Kauai and 2.7 feet in Hanalei. The National Weather Service said there were reports of boats getting pushed up in docks, but the hazard diminished as the morning went on.

‘We are relieved that there is no reported damage and only minor flooding throughout the islands,’ the tsunami center said, describing the situation in Hawaii. The tsunami advisory for the islands was lifted about 11 hours after the eruption more than 3,000 miles away. 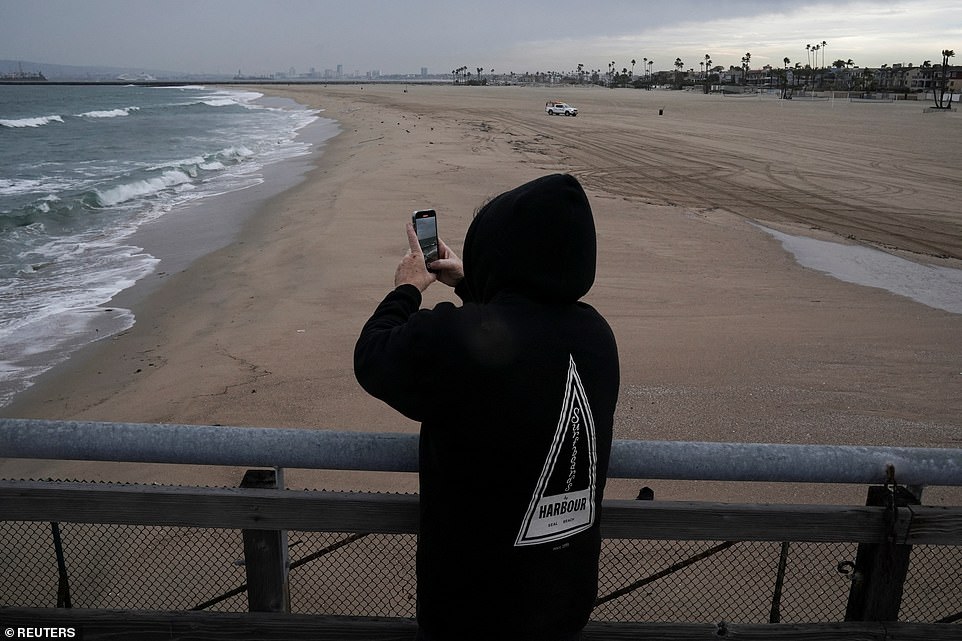 In Seal Beach, California, residents ignored warnings to stay away from the beach and flocked to the municipal pier to take pictures of the waves after a tsunami advisory was issued 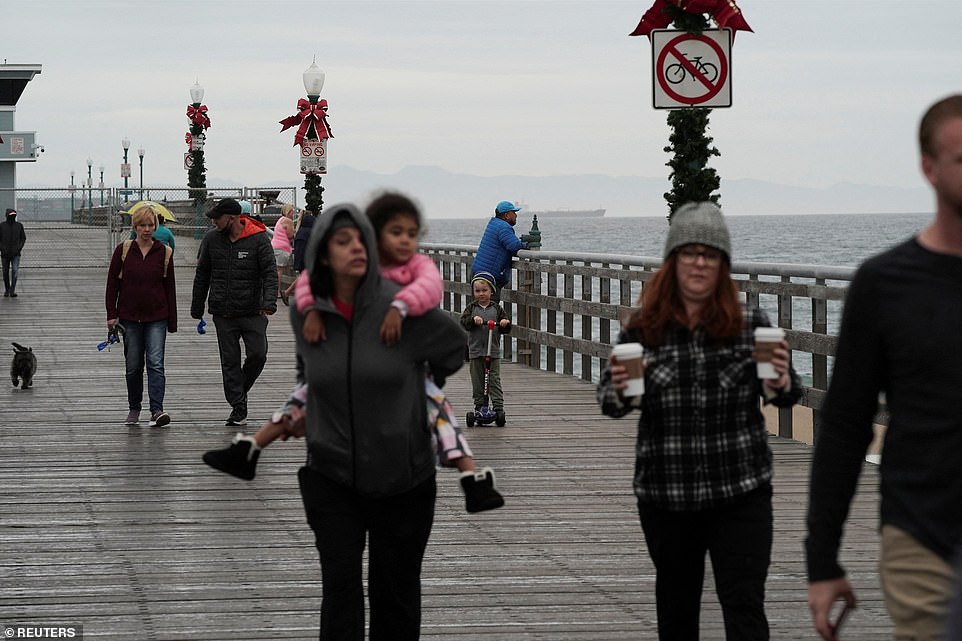 Spectators flock to view waves from the Seal Beach municipal pier after a tsunami advisory was issued following an underwater volcano eruption around 5,300 miles away 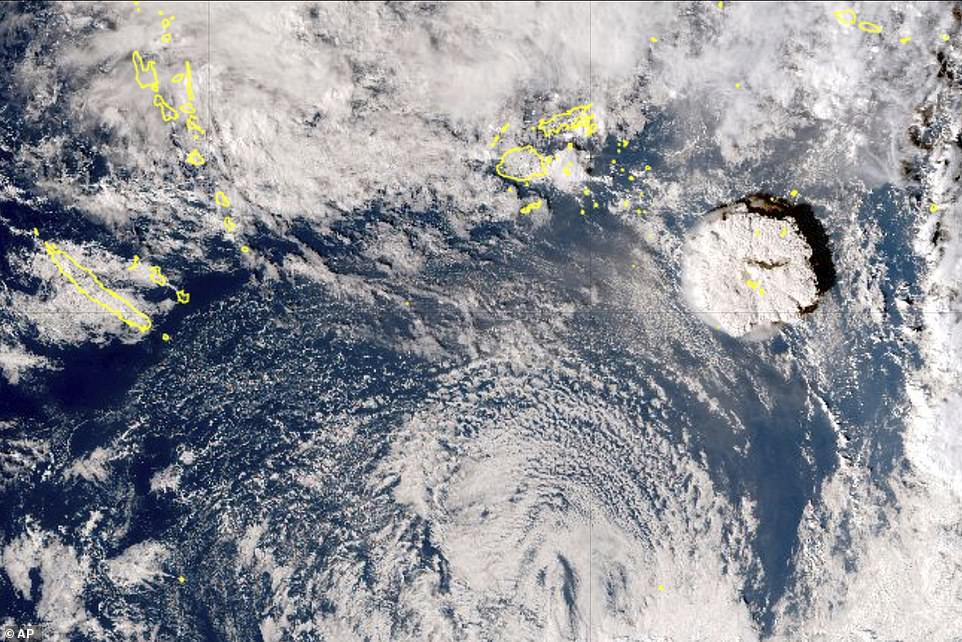 Locals pleaded for people to ‘pray for us’ as the eruption was compared to ‘bombs going off’ by those who heard it, followed by the tsunami surging ashore 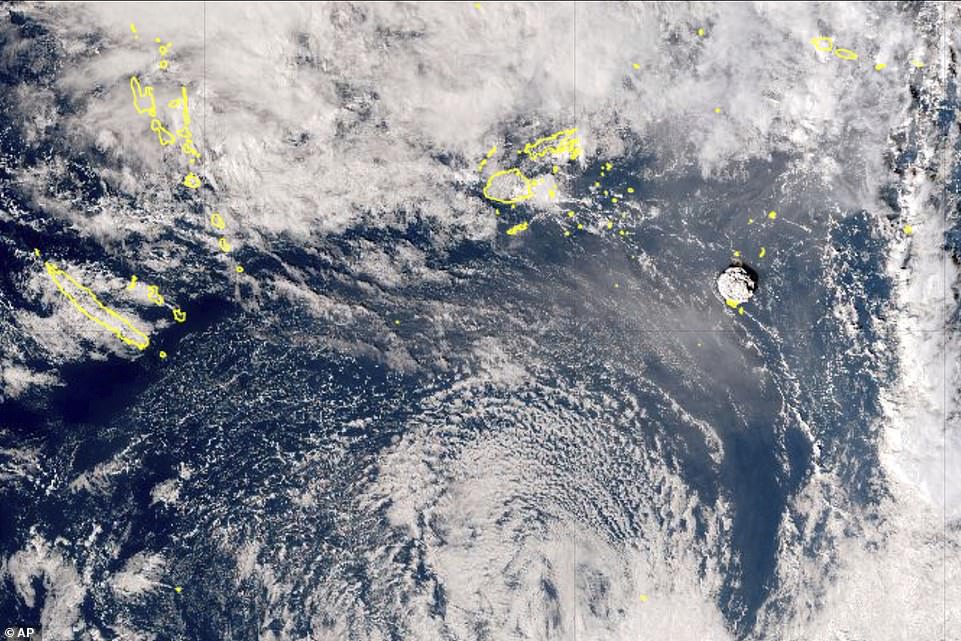 The eruption was so intense it was heard as ‘loud thunder sounds’ in Fiji more than 500 miles away, officials in Suva said

The explosion of the Hunga Tonga Hunga Ha’apai volcano was the latest in a series of dramatic eruptions.

Satellite images captured by the company show how drastically the volcano had shaped the area, creating a growing island off Tonga.

‘The surface area of the island appears to have expanded by nearly 45% due to ashfall,’ Planet Labs said days before the latest activity.

Following Saturday’s eruption, residents in Hawaii, Alaska and along the U.S. Pacific coast were advised to move away from the coastline to higher ground and to pay attention to specific instructions from their local emergency management officials, said Dave Snider, tsunami warning coordinator for the National Tsunami Warning Center in Palmer, Alaska.

‘We don’t issue an advisory for this length of coastline as we’ve done – I’m not sure when the last time was – but it really isn’t an everyday experience,’ Snider said.

He said the waves slamming ashore in Hawaii were just under the criteria for a more serious tsunami warning.

‘It looks like everything will stay below the warning level, but it’s difficult to predict because this is a volcanic eruption, and we’re set up to measure earthquake or seismic-driven sea waves,’ Snider said. 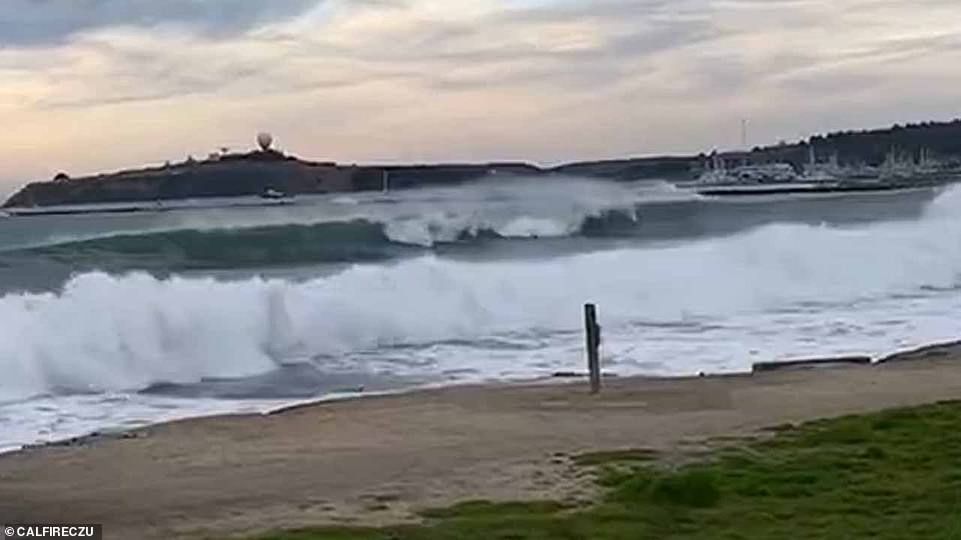 Large waves move in near Santa Cruz on Saturday. Inundation is not expected, but a tsunami advisory means there could be dangerous currents and strong waves along the coast 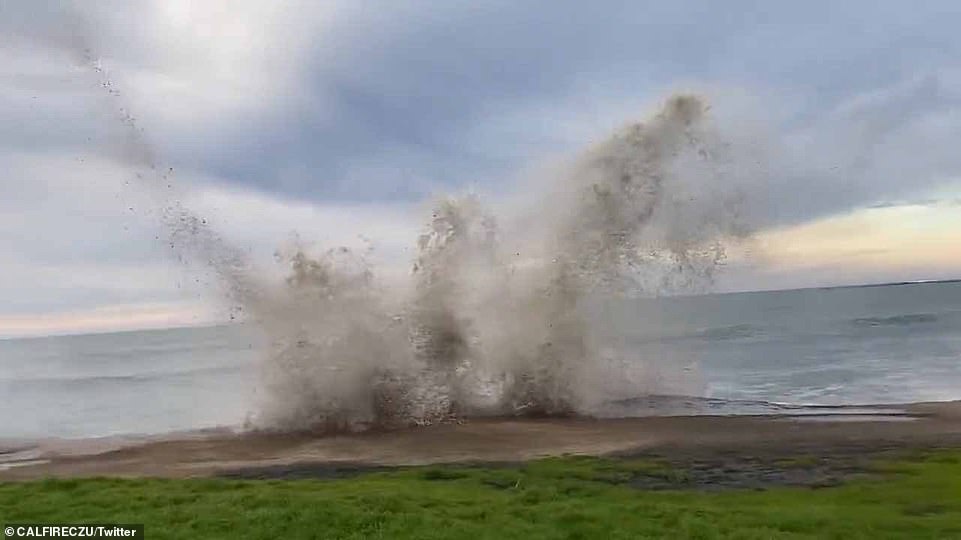 Large waves are seen in San Mateo County at around 8.10am on Saturday as a tsunami moved ashore 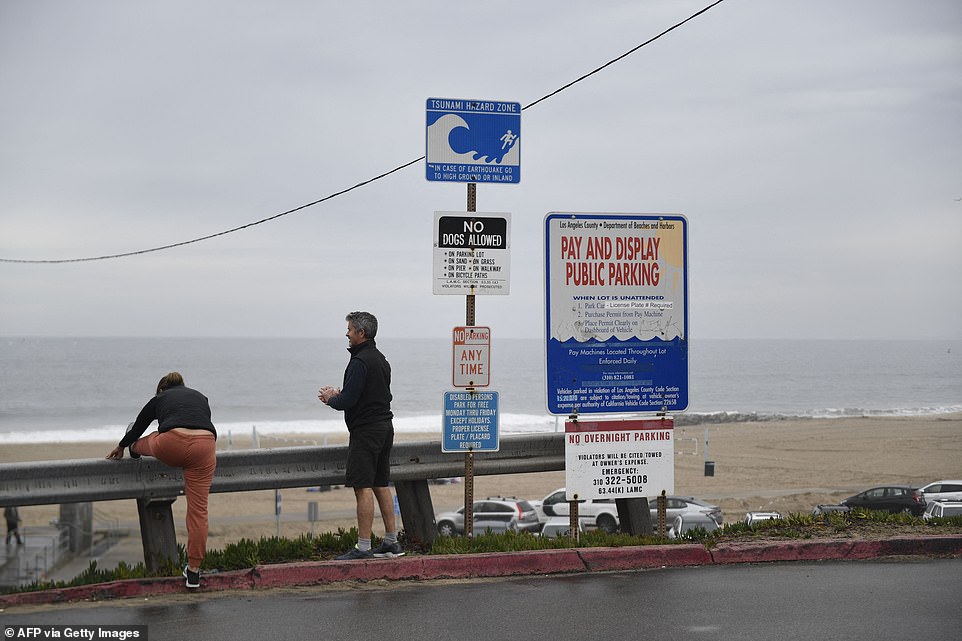 Joggers stretch next to a tsunami hazard zone sign in El Segundo, California, on January 15, 2022. The US National Weather Service issued tsunami advisories for the entire west coast of the United States following a massive volcanic eruption 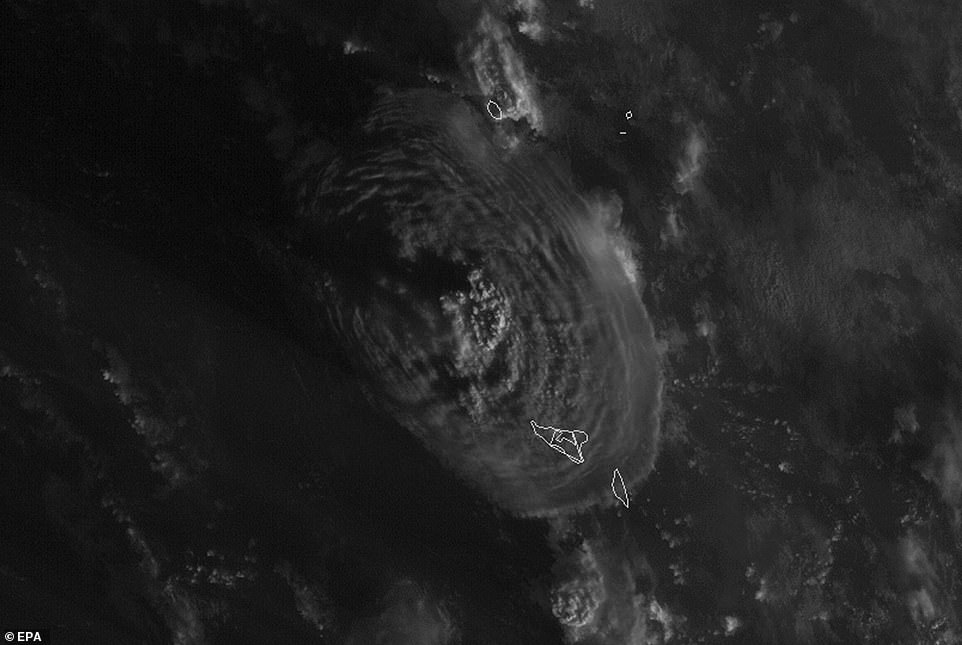 Pictured: Image captured by NOAA’s GOES West satellite and made available by the National Oceanic and Atmospheric Administration (NOAA) shows an explosive eruption of the Hunga Tonga-Hunga Ha’apai volcano, located in the South Pacific Kingdom of Tonga, 13 January 2022

Beaches and piers were closed across Southern California as a precaution. The National Weather Service tweeted there were ‘no significant concerns about inundation.’ Strong rip currents were possible, however, and officials warned people to stay out of the water.

On California’s central coast, the National Weather Service reported tsunami waves up to 4 feet (1.2 meters) and flooding in beach parking lots at Port San Luis. About 200 miles (320 km) down the coast, the waves were much smaller at Southern California’s Seal Beach, according to Michael Pless, the owner of M&M Surf School.

‘The waves are looking pretty flat,’ Pless said. ‘We’re hoping they reopen the beach in a couple hours.’

Crowds gathered at the Santa Cruz Harbor in California to watch the rising and falling water strain boat ties on docks. Law enforcement tried to clear people away when big surges started at around 7:30 a.m.

About an hour later, a surge went over the back lip of the harbor, filling a parking lot and low-lying streets and setting some cars afloat. In 2011 after the Japanese earthquake a series of surges cost $20 million of damage in the harbour.

Although experienced surfers would consider the waves reaching the West Coast barely high enough to qualify as swells, the National Weather Service warned that tsunamis cause deceptive water surges powerful enough to pull people out to sea.

Residents of American Samoa were alerted of a tsunami warning by local broadcasters as well as church bells that rang territory-wide Saturday. An outdoor siren warning system was out of service. Those living along the shoreline quickly moved to higher ground.

As night fell, there were no reports of any damage and the Hawaii-based tsunami centre cancelled the alert.

The eruption (pictured from a satellite) could be heard thousands of kilometres away and sparked warnings in New Zealand, Fiji and American Samoa 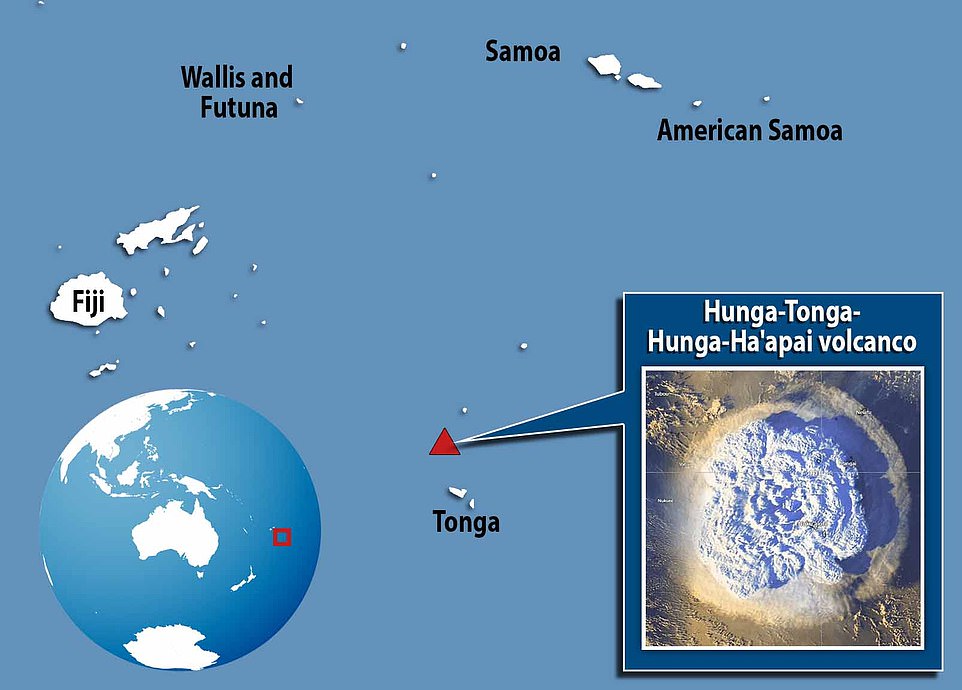 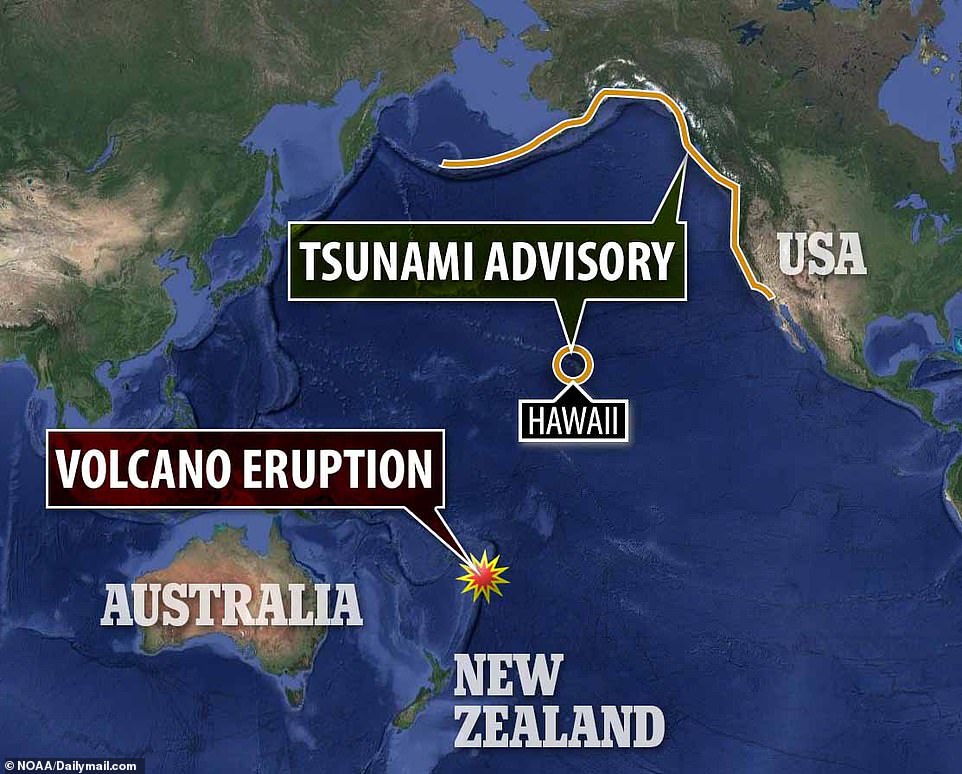 A tsunami advisory (orange) is in effect for Hawaii and the entire US Pacific seaboard, from the US/Mexico border all the way to the tip of Alaska’s Aleutian Islands, after an undersea volcano erupted near Tonga

Authorities in the nearby island nations of Fiji and Samoa also issued warnings, telling people to avoid the shoreline due to strong currents and dangerous waves. In New Zealand, officials warned of possible storm surges from the eruption.

New Zealand’s private forecaster, Weather Watch, tweeted that people as far away as Southland, the country’s southernmost region, reported hearing sonic booms from the eruption. Others reported that many boats were damaged by a tsunami that hit a marina in Whangarei, in the Northland region.

Earlier, the Matangi Tonga news site reported that scientists observed massive explosions, thunder and lightning near the volcano after it started erupting early Friday. Satellite images showed a 3-mile-wide plume rising into the air to about 12 miles.

The Hunga Tonga Hunga Ha’apai volcano is located about 40 miles north of the capital, Nuku’alofa. In late 2014 and early 2015, a series of eruptions in the area created a small new island and disrupted international air travel to the Pacific archipelago for several days.

There is not a significant difference between volcanoes underwater and on land, and underwater volcanoes become bigger as they erupt, at some point usually breaching the surface, said Hans Schwaiger, a research geophysicist with the Alaska Volcano Observatory.

With underwater volcanoes, however, the water can add to the explosivity of the eruption as it hits the lava, Schwaiger added.

Before an explosion, there is generally an increase in small local earthquakes at the volcano, but depending on how far it is from land, that may not be felt by residents along the shoreline, Schwaiger said.

In 2019, Tonga lost internet access for nearly two weeks when a fiber-optic cable was severed. The director of the local cable company said at the time that a large ship may have cut the cable by dragging an anchor. Until limited satellite access was restored people couldn’t even make international calls.

Southern Cross Cable Network’s Veverka said limited satellite connections exist between Tonga and other parts of the world but he did not know if they might be affected by power outages.