Draveil, France: When the mayor of this Paris suburb was convicted in February of rape and sexual assault and sentenced to five years in prison, France’s MeToo movement claimed a victory.

Georges Tron had once been a government minister. Activists hoped his downfall and imprisonment would send a powerful message to others guilty of similar crimes. 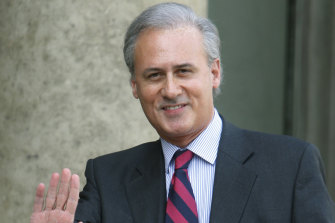 But more than two months later, the convicted conservative party mayor is still in charge, governing the town of almost 30,000 people from his prison cell.

He relies on subordinates to execute the day-to-day business. The most recent town council meeting began with the reading of a letter from Tron, drafted in prison, with directives about the budget.

The meeting protocol listed the mayor as absent with excuse.

Activists say the case has now come to symbolise much that remains broken about the French justice system and how far the country remains from living up to its ideals.

Within days of his conviction, a combative letter from Tron had appeared on store fronts and local announcement boards, throwing the town into turmoil.

“Having always proclaimed my innocence in this matter, I will continue to fight to have it recognised again and will not resign from any of my mandates or from my functions,” he wrote, announcing that he was appealing his conviction.

“Rest assured that I won’t falter,” the 63-year-old vowed in the letter, addressed to “each and every one of you.”

“In the verdict, much was said about the grip he had on his victims,” said Christian Chardonnet, a local politician with President Emmanuel Macron’s party. “But this grip extends to the entire town.”

“It’s a Mafiosi system that is replicated on all levels,” said Francois Damerval, a local politician for an environmentalist party.

Under French law, Tron’s decision to appeal means that despite his conviction, he can once again be presumed innocent until a final judgment by the highest court. His local conservative allies have seized on that loophole and rejected efforts to remove him from office.

The French government – which under President Emmanuel Macron has declared a “cultural battle” against sexual assault – has not intervened, either.

The Justice Ministry did not respond to a request for comment.

Justice Minister Éric Dupond-Moretti cited the independence of the judiciary in March to explain why the government had not removed Tron as mayor. But before becoming Justice minister, Dupond-Moretti was one of the lawyers who defended Tron during the trial that resulted in his 2018 acquittal.

A petition calling for the mayor’s removal has been signed by more than 35,000 people.

In Draveil itself, though, outrage has been more muted.

Standing across from a shoe store with the mayor’s letter plastered on its entrance, beneath trees neatly pruned into an aerial hedge, a small group of activists handed out anti-Tron leaflets on the main market square this past week.

“I’m not saying he’s innocent,” one woman walking by said to the activists. Still, she remained unconvinced that Tron should resign. After all, she said, the town is “well managed”.

Her voice was soon drowned out by a tense exchange on the other side of the market, where a man hurled a sexual insult at one of the activists. “It’s easy to destroy people,” the man shouted. The louder he spoke, the more his face mask kept dropping.

Alongside him was his wife, who claimed to have worked in the mayor’s office before her retirement without noticing suspicious behaviour.

Withdrawing from the couple, the activist, Marion Hubert, was exasperated. “I’m ashamed that my country is so behind,” she said. About half of the residents she speaks to continue to support the mayor.

To Hubert and other activists, the local resistance to the mayor’s removal from office is symptomatic of the challenges in confronting France’s patriarchal society, in which the lines between harassment and seduction have at times been blurred.

But support for the mayor may also reflect Tron’s long-standing influence in Draveil. He has governed the town since 1995, managing to stay in power even as his foray into national politics was cut short by the accusations that have now resulted in his conviction.

The mayor first came under investigation in 2011, one year after taking up an additional post as a junior minister for civil service under president Nicolas Sarkozy. Two former town hall employees accused Tron of making them submit to foot massages that transitioned into rape and sexual assault.

Tron resigned from the cabinet. But he denied the accusations, saying he was merely interested in reflexology. And he continued on as mayor of Draveil, comfortably winning reelection even as judicial proceedings continued.

The first court verdict, in 2018, was acquittal for Tron. Then, in mid-February, an appeals court overturned that decision in the case of one of the women, sentencing Tron to five years in prison, of which two were suspended.

“The problem is, there are so many Trons in France,” Elodie Tuaillon-Hibon, a lawyer who represented an advocacy group during the most recent trial, said in early March. She represents several women who have accused high-profile French figures, including actor Gérard Depardieu and Interior Minister Gérald Darmanin, of sexual assault or rape.

Despite an ongoing investigation into whether there is any merit to accusations that Darmanin raped a woman in 2009, he continues to be the minister in charge of France’s national police force.

Such close ties between officials accused of sexual crimes and authorities investigating those accusations have prompted accusations of bias from activists.

When local demonstrators were distributing their leaflets in Draveil this past week, a police officer and two municipal employees appeared on the square, ordering them to move their protest off the market. It was the second time in five days that officers had interrupted the group.

After local opposition politicians questioned the legality of their request, and with journalists observing the back-and-forth, the municipal workers eventually left without enforcing their order.

Hubert and other activists say the police interventions are attempts to intimidate them. Among the residents who are on their side, many tell them they are afraid to speak out for fear of losing their jobs or being otherwise disadvantaged.

After 25 years of Tron as mayor, “a fear of the unknown and of criticising the mayor” is widespread in Draveil, said Gabrielle Boeri-Charles, a town council member.

Tron and his allies have largely remained silent about those accusations.

A secretary for the mayor said she would relay written questions to the imprisoned mayor, but there was no response. The mayor’s office also did not respond to a request for an interview with Richard Privat, the mayor’s deputy who has been handling day-to-day tasks in Tron’s absence.

Speaking to French television earlier this month, Privat said that “until proof to the contrary, [Tron] is still mayor”.

Tron’s allies on the town council have rejected attempts by the opposition to remove him from office or to redirect his allowances to projects helping victims of sexual violence. Facing another such challenge last week, Tron’s supporters came up with a blunt response.

“They left the room,” recalled Boeri-Charles.

In video footage, an opposition member can be heard saying: “This is a denial of democracy.”

Then, the lights are turned off and the opposition is left behind in the dark.