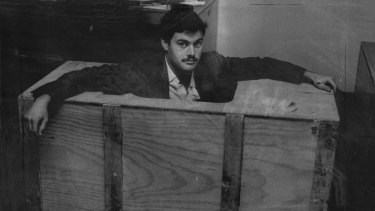 A policeman shows one of the crates used in the daring airline robbery attempt.

Police say the gang sent four men in crates in TAA flights from Brisbane to swap Reserve Bank cash in crates in cargo holds for telephone books while the planes were in flight.

The cash was being flown to banks in Rockhampton, Townsville, Mt Isa and Cairns.

Police believe the gang depended heavily on insider information from the Reserve Bank, TAA or a security firm.

A porter at Rockhampton heard noises coming from a crate as it was unloaded at 10.45 am. When the 120 cm by 60 cm by 60 cm crate was opened, a distinctly air-sick and oxygen-deprived man tried to run across the airstrip but was caught by the porter and a TAA pilot.

Inside the crate was $200,000 in cash destined for the Rockhampton branch of the Commonwealth Bank. The bank’s box contained telephone books. 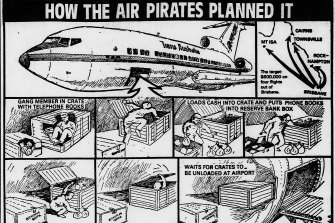 ‘How the air pirates planned it’ – Published in The Age on September 22, 1982.Credit:The Age Archives

Police said another man was found in a crate at the TAA cargo depot at Brisbane’s Eagle Farm Airport. It is believed the man was to have been sent on a Cairns flight, but his crate was accidentally left behind.

Police said a fifth man was arrested as he waited near a cargo depot at Townsville.

Queensland’s Assistant Police Commissioner, Mr Tony Murphy, said last night the scheme was “the most brazen and bizarre robbery attempt” he had known.

Mr Murphy said the man arrested at Townsville had also succeeded in switching $200,000 from the Reserve Bank’s strong box into his own crate.

He said the man on the Mt Isa flight failed to get any money because his crate had been stored in a different part of the cargo locker and he could not find the money.

Airline sources said this flight was a Boeing 727 which could have confused the gang member.

Witnesses at Rockhampton Airport said the man seized there appeared to be extremely sick and cramped and was in no condition to escape.

TAA sources said the crates were fitted with air holes and breathing hoses, but the man on the Rockhampton flight was in a “fairly airless” part of the hold.

The sources said the thieves needed reliable information to know that the money was normally carried in the forward hold of the jets, which are pressurised and air-conditioned.

If the crates had been placed in unpressurised rear cargo holds, the men would have died in fight.

At a Press conference yesterday, Mr Murphy and Chief Superintendent W. Antill, of the Federal Police, would not say if the men arrested had been named in the report of the Costigan Royal Commission on the Painters and Dockers Union.

“All I can say is that all the men are well known Melbourne identities and ate closely associated with that union,” Mr Murphy said.

“All the money has been recovered.”

He said investigators were still checking when the men had been brought to TAA’s cargo depot in their crates although it is believed they were consigned early yesterday morning.

Mr Murphy said it was possible more arrest would be made.

Late last night a man was charged with conspiracy and stealing at Rockhampton.

Related posts:
September 20, 2020 World News Comments Off on From the Archives, 1982: Gang’s audacious $600,000 mid-air heist fails
Celebrity News:
Christina Anstead changes her name on Instagram amid divorce from Ant Anstead
Ioan Gruffudd's dad claims marriage to Alice Evans in trouble a while
Johnny Cash's Devastating Childhood Loss Morphed Him From Gregarious to Introspective
Miranda Lambert & Husband Brendan McLoughlin Celebrate Second Wedding Anniversary
Miranda Lambert & Brendan McLoughlin Celebrate 2nd Wedding Anniversary
Recent Posts
This website uses cookies to improve your user experience and to provide you with advertisements that are relevant to your interests. By continuing to browse the site you are agreeing to our use of cookies.Ok