Shocking footage captures a gang of youths stamping on a man and hitting him over the head as he lies on the road in broad daylight.

The video was posted onto social media and took place yesterday on Ben Jonson Road in Stepney Green, east London.

The clip shows a man curled up on the floor and surrounded by at least six people.

The man is then aggressively kicked and stamped on while another youth repeatedly whacks him over the head with what appears to be a golf stick. 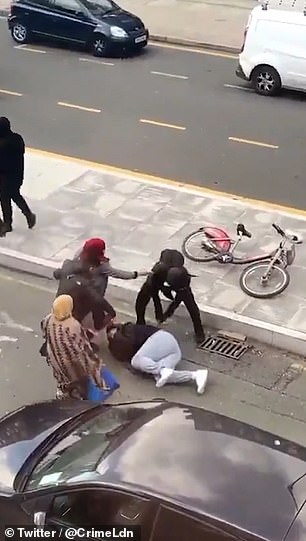 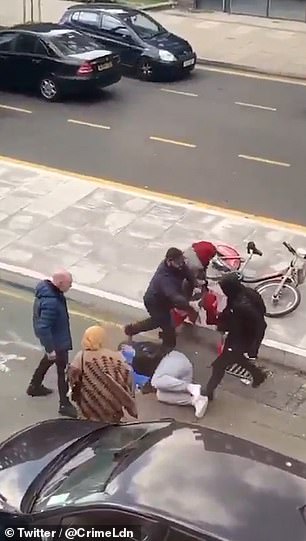 A woman intervenes in the brawl, attempting to stop one of the attackers, before another man helps and chases them away.

He then keeps the attacker at arm’s length, who shouts at the man lying on the ground.

Other members of the public help to restrain the attacker as the victim, who seems dazed, stands up and walks off down the road.

Towards the end of the video, the victim takes off a satchel and passes it to another man, who hands it to one of the gang members before they all walk away.

Social media users reacted to the violent footage, praising those who intervened.

One wrote: ‘Those people saved that lad’s life…’

Another said: ‘Well done to those passersby – especially the two ladies who were first there.’

A spokesperson for the Metropolitan Police said: ‘We are aware of a video posted online on Friday, 13 March that shows an assault on a male in Ben Jonson Road, Tower Hamlets. Enquiries are ongoing to trace the victim and suspect(s).’

Related posts:
March 14, 2020 World News Comments Off on Gang beat man over the head as he lies on the floor in broad daylight
Celebrity News:
Universal sued by actor Faizon Love for cutting Black stars out of ‘Couples Retreat’ publicity posters
Alexandra Daddario Heats Up the Beach in a Bikini in Hawaii
Courteney Cox Recreated That Iconic Friends Moment for Thanksgiving
Diego Maradona's Lawyer Demands Investigation, Says Death 'Criminal idiocy'
Here’s How To Change Your TikTok “For You” Page To See Different Kinds Of Videos
Recent Posts
This website uses cookies to improve your user experience and to provide you with advertisements that are relevant to your interests. By continuing to browse the site you are agreeing to our use of cookies.Ok