RESTAURANTS could soon be keeping diners safe by enclosing them in futuristic bubble pods.

The prototype plastic shields, which resemble big clear lampshades and are suspended from a ceiling, could be coming to an eatery near you. 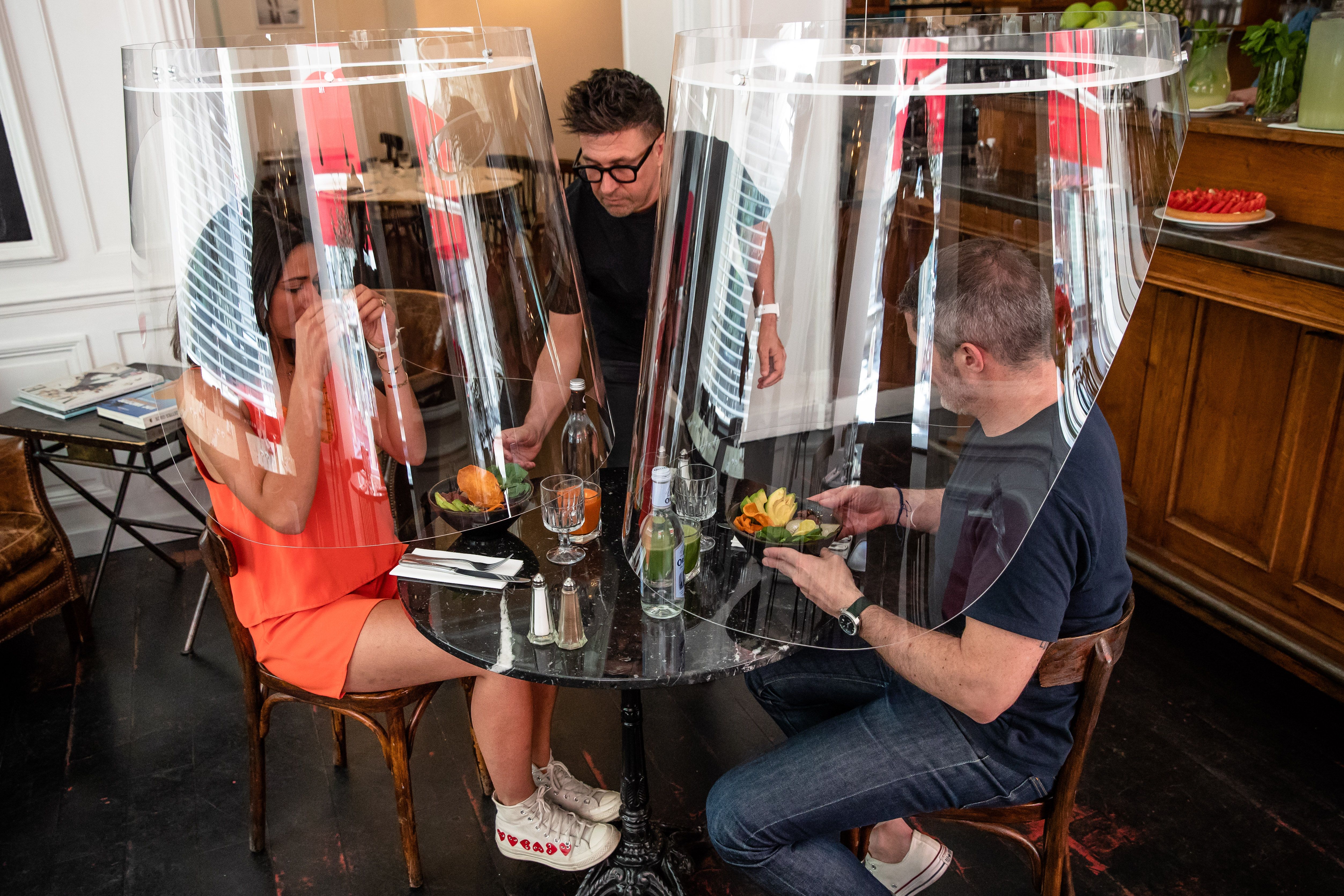 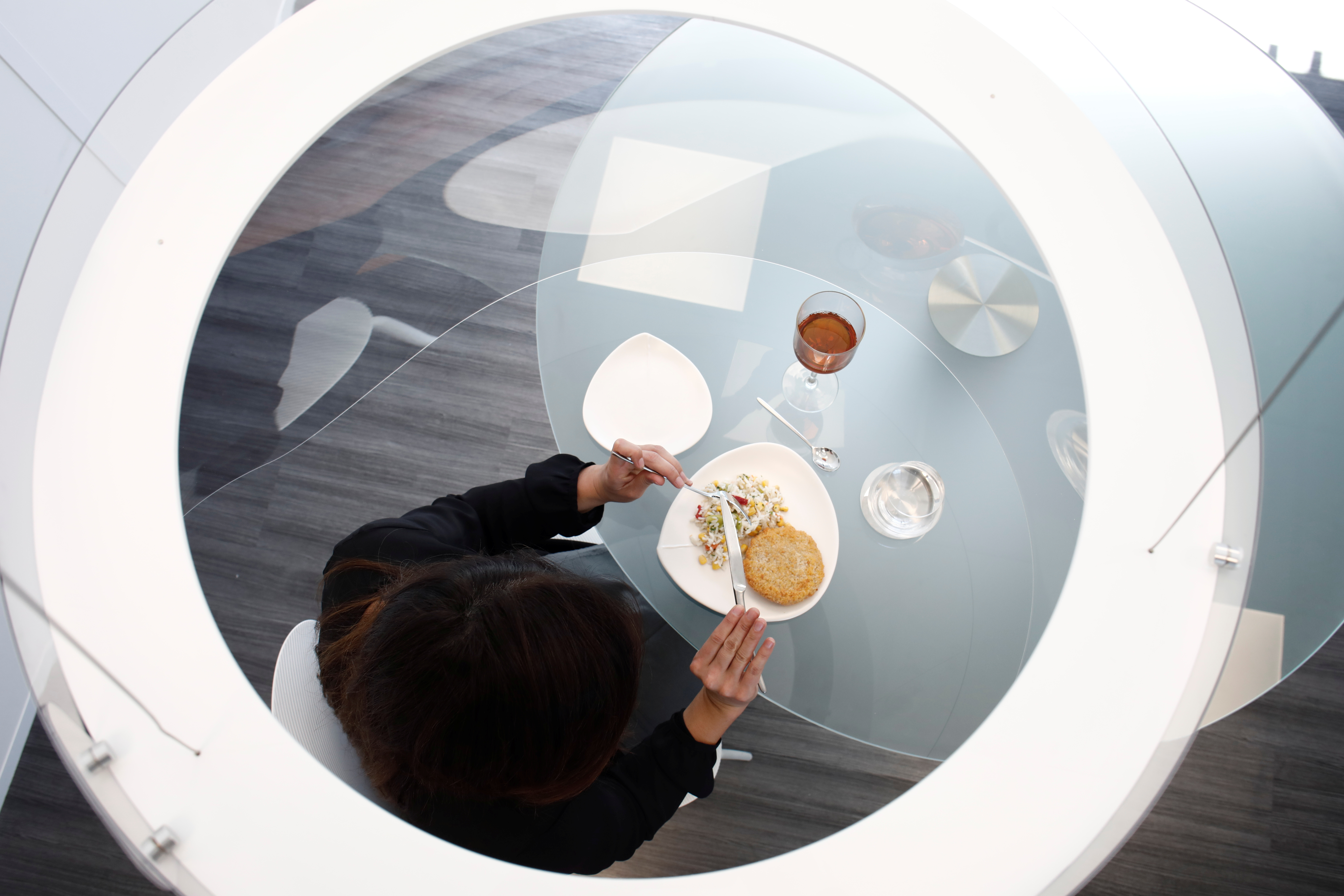 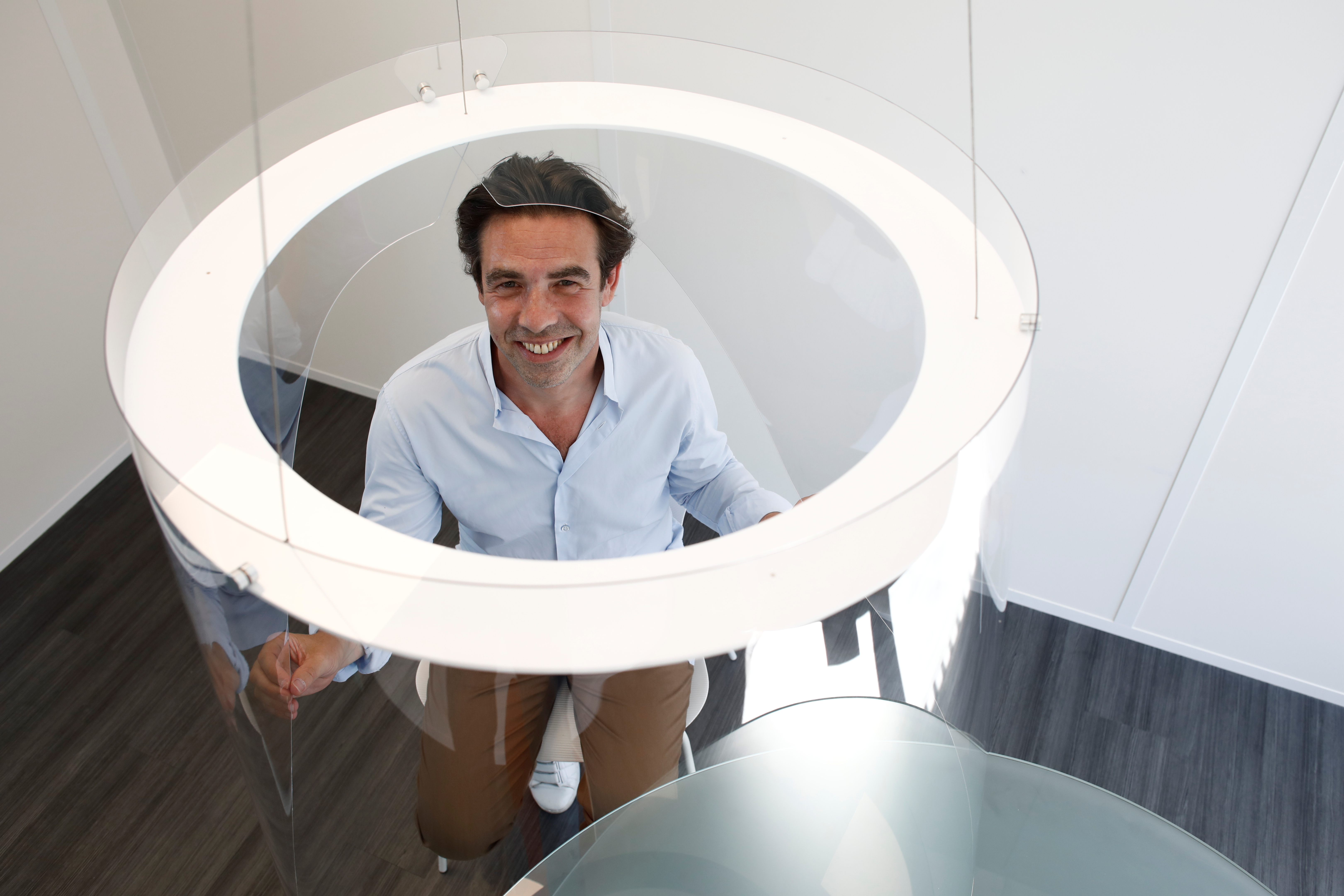 It comes as UK Prime Minister Boris Johnson said he could be allowing pubs and restaurants to reopen as early as next month.

Yet the challenge will be maintaining social distancing until a Covid-19 vaccine is found while crucially having enough customers to make eateries and pubs viable.

And of course diners cannot eat while wearing a surgical mask.

But a French designer believes he has the answer — domes that cocoons its occupants in romantic isolation from the rest of the room.

Christophe Gernigon has created a cylinder of transparent plastic that hangs from a cable on the ceiling, much like a lampshade.

A scoop cut out of the back allows the diner to sit and stand up without having to bend over double.

Gernigon has called them the Plex'Eat and said that he was inspired to invent something different to what is already on the market, which looked like booths in prison visiting rooms.

"I wanted to make it more glamorous, more pretty

He said: "I wanted to make it more glamorous, more pretty.”

His design will go into production next week, and he said he had received interest from France, Belgium, Canada, Japan and Argentina.

France is starting to relax some of the restrictions it imposed to curb the spread of the coronavirus outbreak. Shops and hairdressers have re-opened, and some children are back at school.

But it has yet to give the green light, unlike other European countries, to allow bars and restaurants to reopen.

Some other European countries are putting mannequins at every other table to put some space between the actual customers, like at Augustas and Barbora, a restaurant in the Lithuanian capital of Vilnius.

Some of its faux diners are dressed casually, while others look as though they are at a ball. The clothes showcase the work of local fashion designers.

“We want to fill the space with fun things”, said owner Patrikas Ribas. 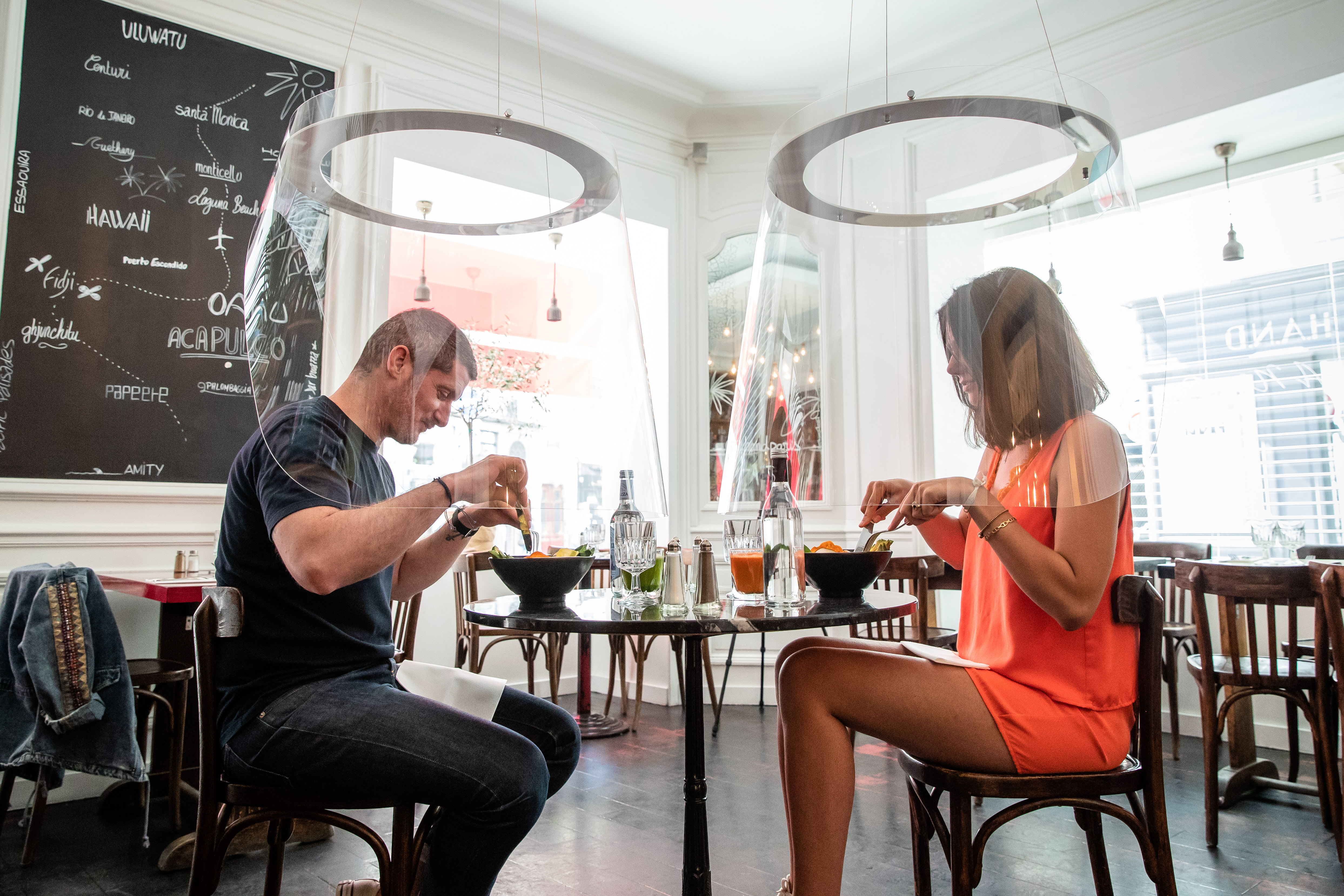 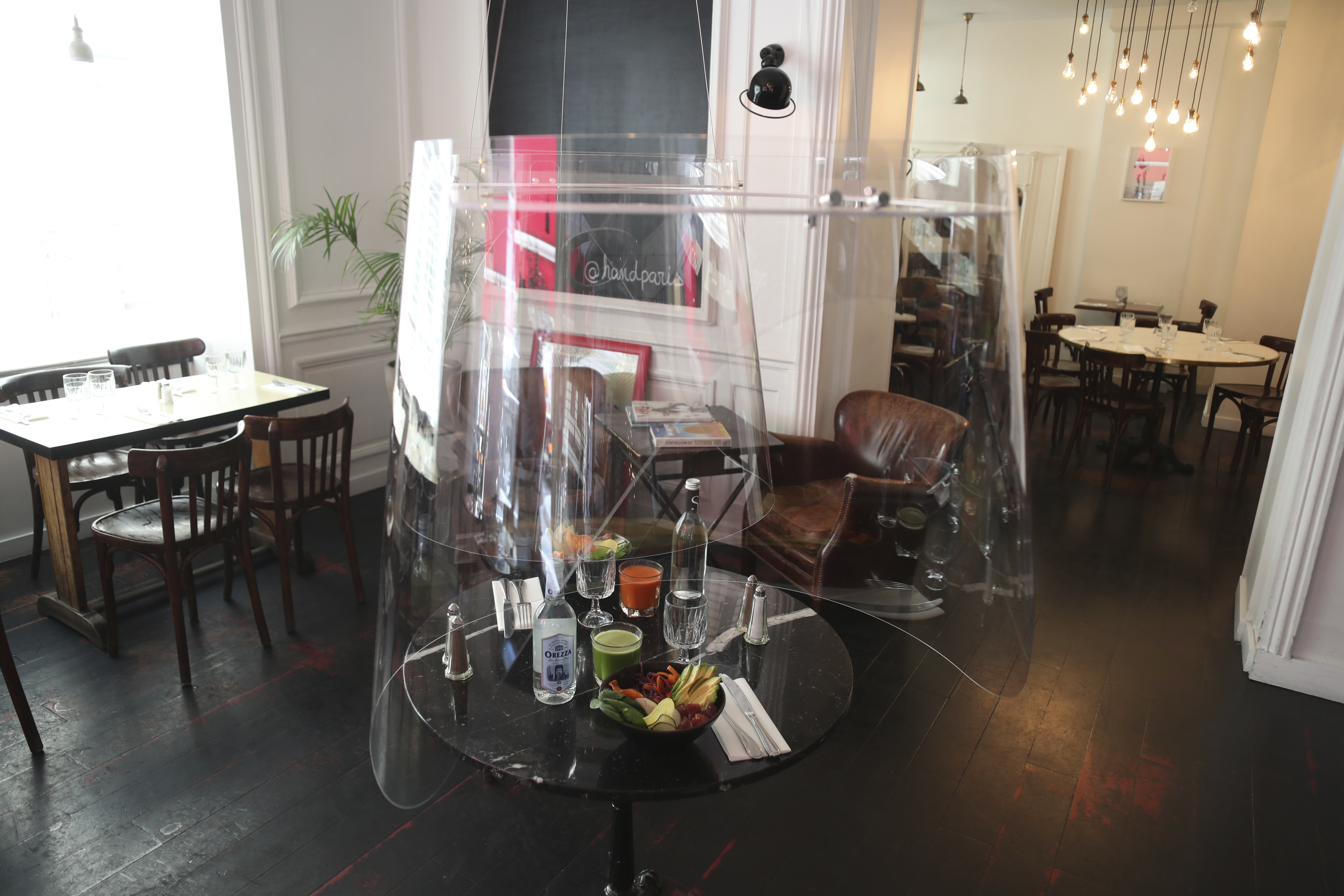 Vilnius Mayor Remigijus Simasius called the initiative a perfect match of communal spirit and creativity working side by side.

At Amsterdam's Mediamatic restaurant, the owners have erected small glass houses that surround each table, served by waiters in protective shields.

Waiters have face shields. Some tavernas have staff in matching face masks. 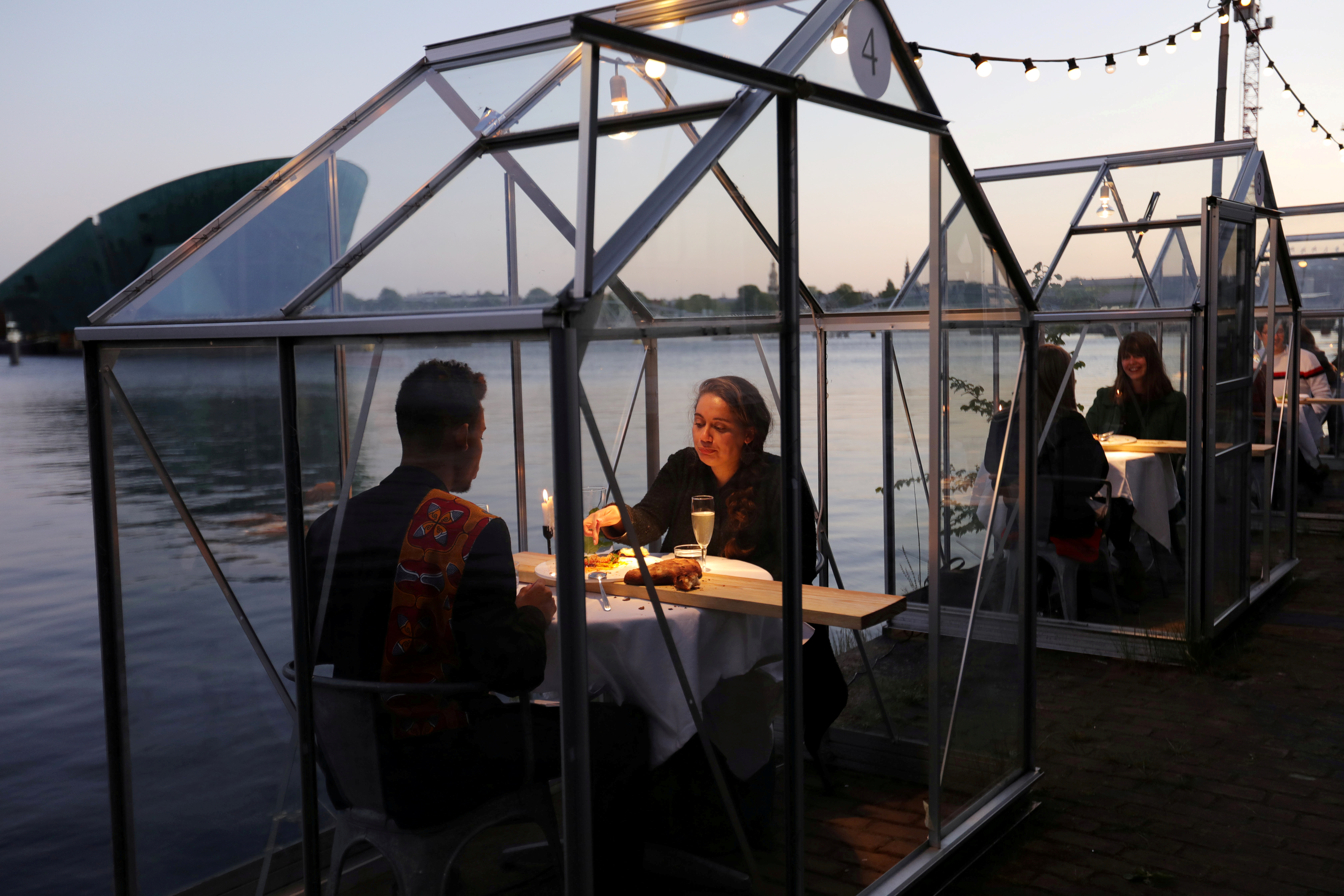 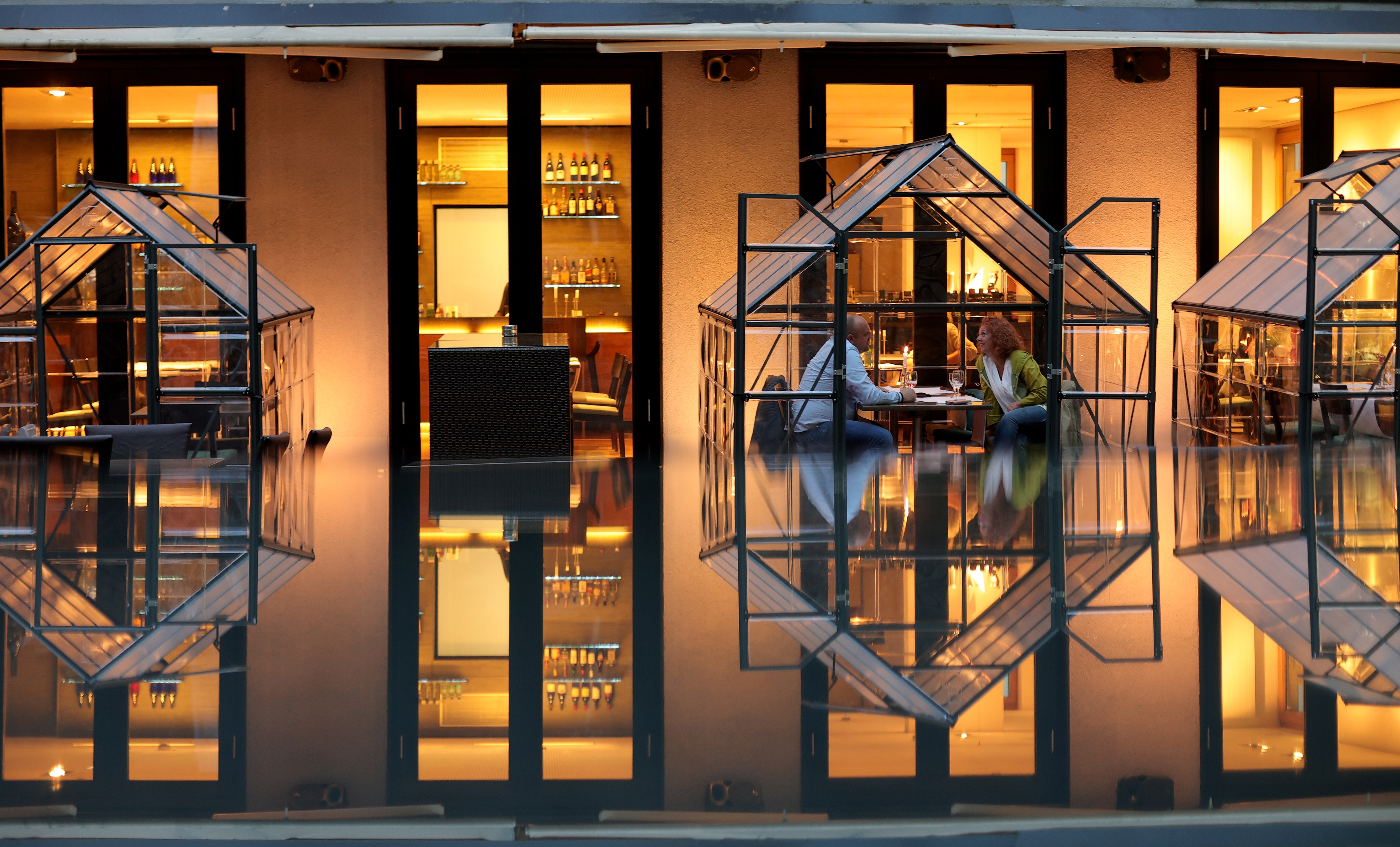 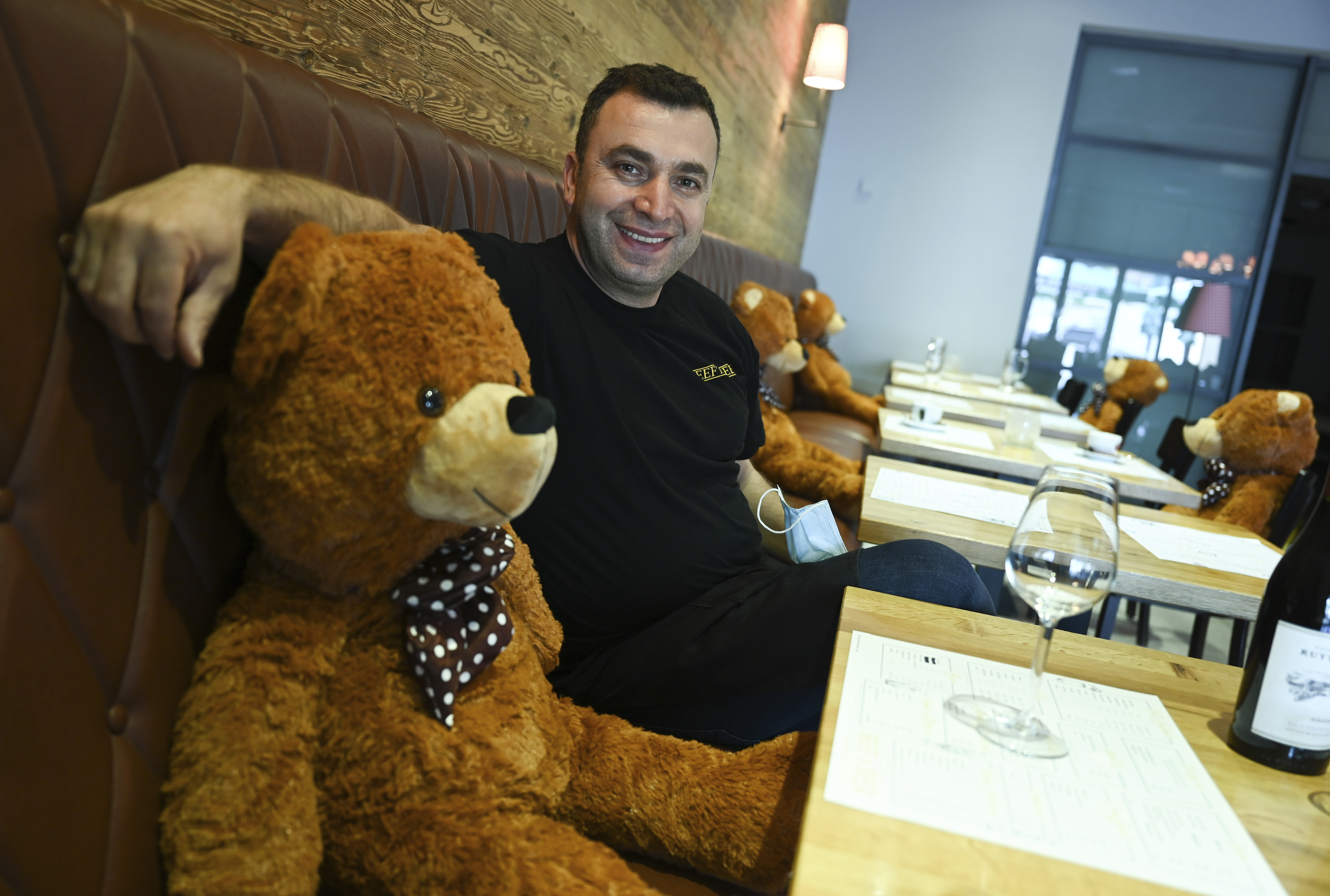 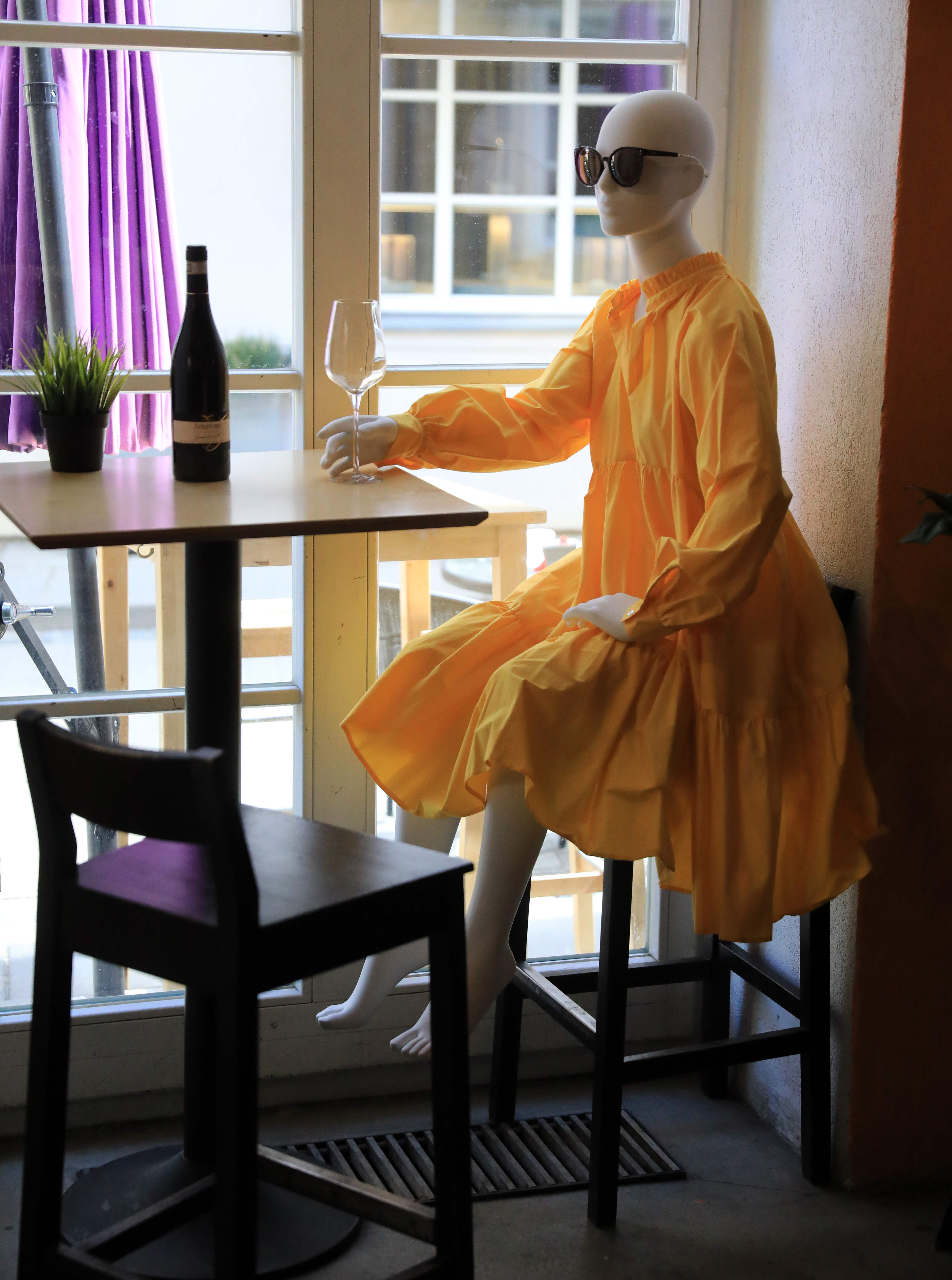 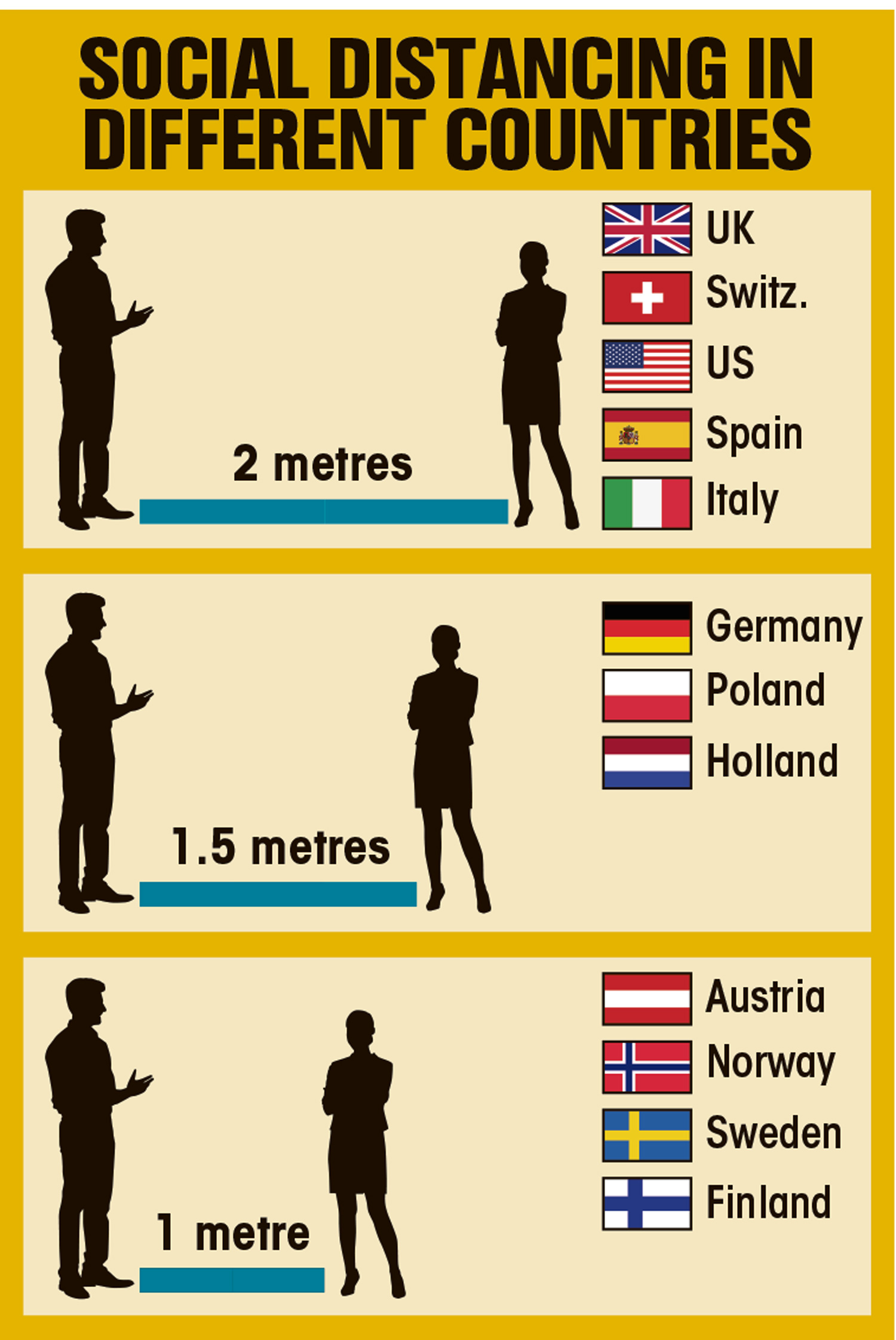 Related posts:
May 28, 2020 World News Comments Off on Glimpse of going out for dinner after coronavirus as restaurants plan glass ‘lampshade’ bubble pods to keep us safe – The Sun
Celebrity News:
Tom Hanks & Rita Wilson Arrive in Greece to Celebrate His Birthday!
Get to Know Marwan Kenzari & His Girlfriend Nora Ponse!
Jordyn Woods, Sailor Brinkley-Cook & Vanessa Hudgens Rock White Swimsuits As They Celebrate Summer
Candace Owens Allegedly Scams Millions Out of Republicans via Anti-Black Lives Matter Initiative
Brooklyn Beckham Is Engaged to Actress Nicola Peltz
Recent Posts
This website uses cookies to improve your user experience and to provide you with advertisements that are relevant to your interests. By continuing to browse the site you are agreeing to our use of cookies.Ok