Climate protesters who blockaded BP’s headquarters were reprimanded for taking selfies in the dock at magistrates court by the judge presiding their case.

The demonstrators, who are largely ‘volunteer workers,’ crowded into the dock at Westminster Magistrates’ Court, and then proceeded to take out their phones and start snapping pictures.

Security staff admonished the protestors and the court clerk ordered them to turn off their phones as district Judge Alexander Jacobs shook his head in disbelief.

Judge Alexander Jacobs reminded the protestors that: ‘Taking pictures in a criminal court is an offence.’ 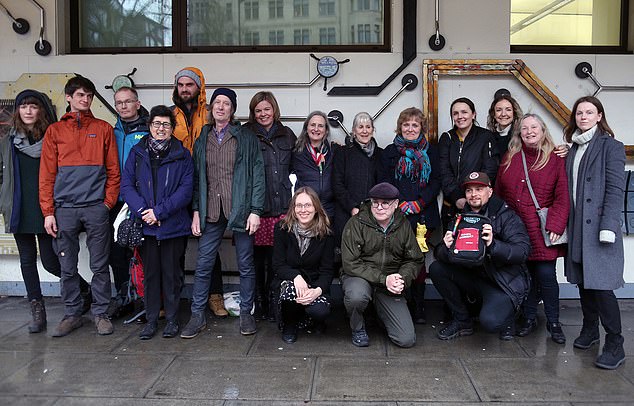 Taking photographs in a court is an offence under the Criminal Justice Act 1925 and the Contempt of Court Act 1981.

The 20 demonstrators were part of a mass protest which began at 3am when they arrived in three trucks packed with 50 large wooden structures and placed five large steel containers outside the building in St James’s Square on 5 February.

The Greenpeace protest coincided with the appointment of BP’s new chief executive who was due to start his first day.

Simon Maughan prosecuting said: ‘This isn’t a case of a couple of protestors standing outside a door with some placards.

‘This is a very serious case that has affected a great number of people on that morning.

Mr Maughan said a text was sent out to BP staff alerting them of the demonstration and advising them to stay at home, but some members of staff did not receive the text and were prevented by protesters from entering the building. 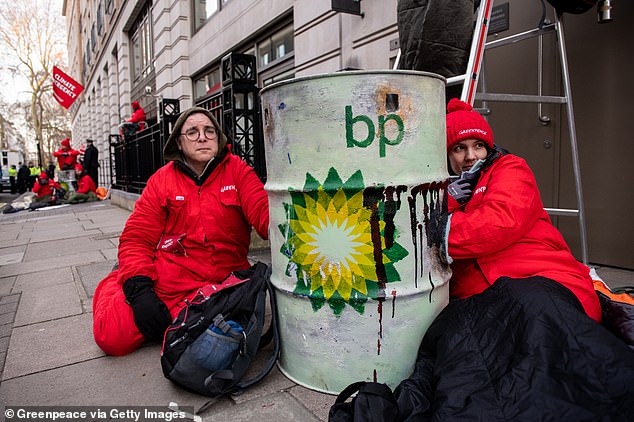 ‘At 6:22am a text was sent out to all BP staff informing them that protesters were blocking the entrances,’ he said.

‘Some staff members attempted to gain access but were sent home and were unable to carry out their work on the site and were subsequently sent home,’ he said.

Mr Maughan said the demonstration had a financial impact on the company and harmed its reputation.

He explained how some protesters locked themselves to oil barrels outside the entrance plastered with the BP logo.

‘Ms Bridgewater was linked to barrel outside the entrance, her right arm was concealed in a barrel.

‘Mr Wulff was chained to a bin near BP property.

‘Ms Harrison was blocking a fire escape of the building.

‘Several others were blocking entry to the building.

‘This went on all morning and until just up to the afternoon, it gives you a flavour of the duration of this. 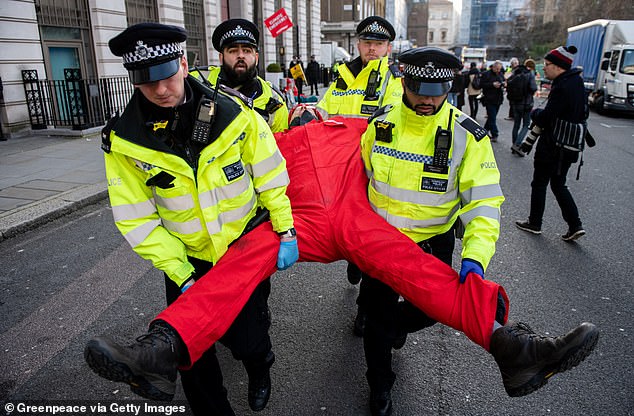 ‘It has caused BP severe damage to its reputation as well as financial loss.

Milke Schwanz defending said: ‘All of these defendants do voluntary work except for a few.

‘Ms Harnett is 70 years old. She is retired, she has three grandchildren. She is honest and has a high regard for the law.

‘Ms Anderson is 38, she had a BA honours in Environmental Studies.

‘This is a matter Greanpeace have been campaigning on for decades.

‘There is not just a conscious motive but these actions are well-founded and recognised by others.’

Addressing the group, Judge Jacobs said: ‘This was a well planned, coordinated operation.

‘The action was organised to coincide with the start of work of the new BP CEO.

‘Your action caused disruption to BP.

‘It did not bring the company to a halt. But there was a loss I am told of 7,200 working hours.

‘Your specific intention was to protest but not to cause any violence. The protest, while disruptive, was peaceful.

Judge Jacob said he was satisfied there was no impact on others’ health and safety.

‘In my judgement the harm was low. While 7,200 hours to the company is a loss, there is no other evidence of impact on others.

‘You are all intelligent, honest and decent members of society. It is not in dispute that your motives were genuine.

Judge Jacobs discharged the activists and abstained from making them pay back any compensation to BP.

Sier, of Longland Road East Sussex and Mills, of Moorlands, Wiltshire were fined a total of £217 due to recent convictions of similar nature.