The chief executive of the Guardian Media Group (GMG) has quit just 15 months into the job with an expected payoff of £600,000.

Annette Thomas will leave the company this month and will be replaced by financial and operating officer Keith Underwood on an interim basis.

GMG is owned by the Scott Trust, the £1 billion endowment fund set up to bankroll the news organisation.

A recent report in the Daily Telegraph suggested tensions between Ms Thomas and Guardian editor Katharine Viner have risen over the direction of the publication and the power structure within the business.

It is believed that Ms Thomas and Ms Viner – who was elected to her position in 2015 following a poll of editorial staff – had clashed over the chief executive’s attempts to bring in more revenue from the publication’s online audience, The Times reports.

Their dispute was said to have been over whether the organisation could afford to invest further in journalism, with Ms Viner reported to have believed that it could, and Ms Thomas arguing for a more disciplined approach. 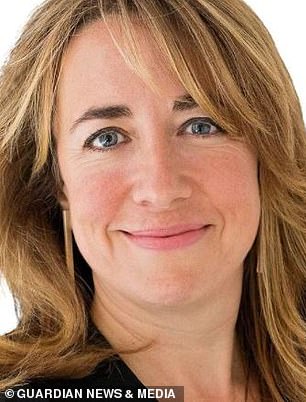 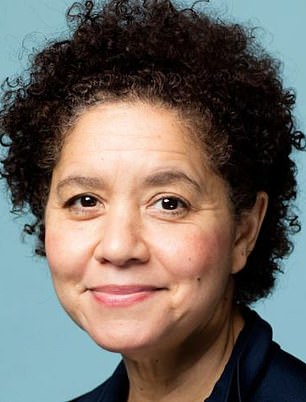 Annette Thomas (right) will leave the company this month. Recent reports suggested tensions between Ms Thomas and Guardian editor Katharine Viner (left) had risen over the direction of the publication and the power structure within the business

A source blamed a clash of personalities for the dispute between the two, who would reportedly escalate ‘minor issues into big disagreements’.

Anette Thomas: The academic who oversaw reduced the Guardian’s losses by 50%

Ms Thomas, who is from the US, has a doctorate in neuroscience from Yale and had spent decades in academic publishing before taking her position at GMC.

She is a non-executive Trustee Fellow of the Yale Coropration and was a board member of Cambridge Assessment at the university’s press.

Ms Thomas, who describes herself as a ‘mother and feminist’ on her Twitter biography, earned her Bachelor’s degree in Biochemistry and Biophysics from Harvard University between 1982 and 1986.

She then went on to a five-year Doctor of Philosophy, Cell Biology and Neuroscience PhD at Yale.

Reports had claimed staff at the Guardian had thought that either she or Katharine Viner would have to leave due to differences of opinion over the newspaper’s direction.

Ms Thomas had overseen a ‘strong financial performance’ in the 2020/21 year, having grown annual revenue and reduced operating losses by 50%, the Guardian press office said.

American Ms Thomas, who has a doctorate in neuroscience from Yale, had spent decades in academic publishing before taking her position at GMC, while Ms Viner joined the Guardian in 1997 and worked her way up the ranks.

The source said: ‘Annette is a high function corporate woman who’s process driven and would expect to exercise full control. Kath is a Guardian lifer and a fully signed-up believer in its mission.’

Ms Thomas’s decision to quit comes two months after the Scott Trust announced a review into GMG’s governance and structures.

The departing boss said: ‘After a significant turnaround year, having put a new strategic plan and a high-calibre team in place, substantially increasing our focus on journalism and digital recurring reader revenues, I have decided to step down from the role of chief executive, as the current governance and structures need more time to fully evolve to support the implementation of the reader-centric strategic plan.’

According to reports, the complex structure at GMG has contributed to tensions over who is in charge and how the Guardian should proceed.

Ms Thomas was said to favour a more prudent approach after losses were staunched by pandemic job cuts, while Ms Viner, who reports to the Scott Trust, rather than GMG, is viewed as pushing for reinvestment into the newsroom.

GMG chairman Neil Berkett said: ‘We have a clear strategy and a strong management team in place.

‘Despite the difficulties caused by coronavirus, Guardian and Observer journalism has never been stronger or more relevant and our long-term commitment to trusted reader relationships is beginning to power our growth.

‘The board will continue to support Keith Underwood, Katharine Viner and the wider management team to achieve our long-term goals.’

Katharine Viner poses at the Off-Broadway opening night performance of My Name Is Rachel Corrie at the Minetta Lane Theatre October 15, 2006 in New York City

Katharine Viner became editor-in-chief of the Guardian in June 2015 – a position she was elected to following a poll of editorial staff.

Ms Viner, who was raised in Yorkshire, had been part of the Youth CND and the Anti-Apartheid Movement, and joined the outlet as a writer in 1997, having read English at Pembroke College, Oxford.

She went on to be appointed deputy editor in 2008.

Ms Viner launched Guardian Australia in 2013 and was also editor of the New York-based Guardian US.

In a column titled ‘Feminism as imperialism’ in 2002, she had argued that the US President at the time, George W Bush, was not ‘the first empire-builder to wage war in the name of women’.

She had written in her anti-war article: ‘Bush has taken on the previously-unknown cause of Iraqi women – actually, look at the quotes, it’s women everywhere! – to justify another war.

She is the first woman to be the editor of The Guardian in its 194-year history.

Ms Viner had co-edited the play My Name is Rachel Corrie with actor Alan Rickman from the correspondence of Rachel Corrie, the American activist who was killed by a bulldozer operated by the Israeli Army in Gaza in 2003.