This has been a busy old crisis for Sir David King, the former chief scientific adviser to Tony Blair and Gordon Brown, who has rolled back the years to turn himself once more into a staple of the nation’s TV and radio news schedules.

The sprightly 80-year-old, who gained fame as the face of the Labour government’s response to the 2001 foot-and-mouth epidemic, is suddenly back as an expert ‘talking head’ willing to share his boundless wisdom with the great British public.

Barely a day goes by without Sir David explaining, in a clipped South African accent, exactly what he thinks Boris Johnson – and by extension the scientists on the Sage panel who advise him on public health policy – have been getting so very wrong.

Without exception, his take has been critical of the Government, sometimes highly so. And inevitably, his remarks have been amplified endlessly by its political opponents. 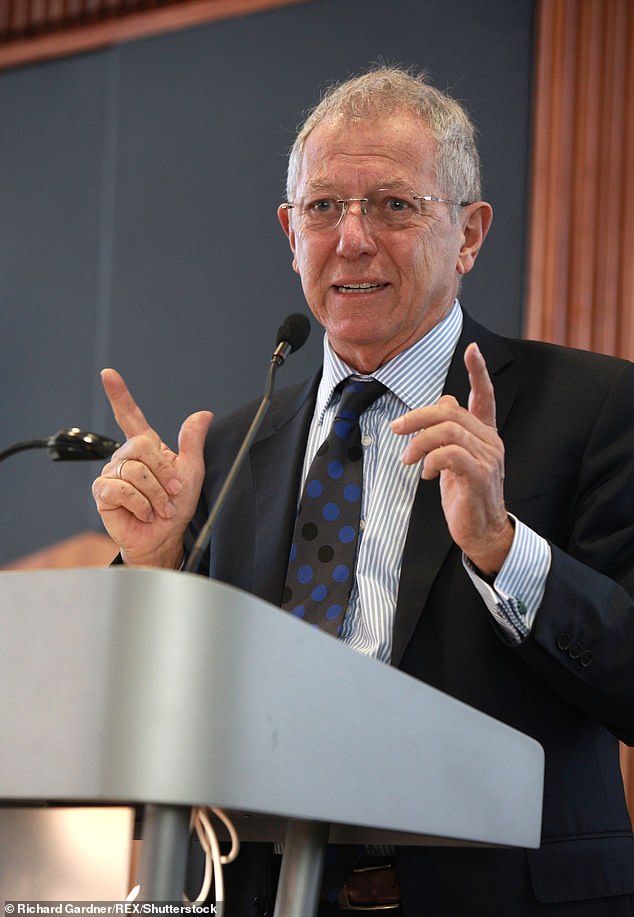 Yesterday, this Left-leaning knight of the realm was at it again, hitting the airwaves to promote his latest wheeze – a body which he has perhaps misleadingly decided to call the ‘independent Sage committee’.

Conceived as an alternative to the official panel of experts, which meets behind closed doors to advise the Government on Covid-19 policy, Sir David claimed his hand-picked group of scientists intended to offer provide ‘robust, unbiased advice’.

Its meetings, the first of which went on for two and a half hours yesterday afternoon, are to be broadcast live on YouTube. It will then make formal submissions to Parliament’s Health and Social Care Select Committee.

‘If you are giving scientific advice, then your advice should be free of any political bias,’ he declared, during a round of promotional TV and radio interviews yesterday morning, carping that the official Sage committee is ‘dominated by people whose income is determined by the fact they are working for the Government’.

All of which would be just as well, were it not for a couple of inconvenient facts. First, as you can see from the panel on the right of this page, the majority of Sir David’s panel of 12 scientists turns out to be very biased indeed.

Of the ten whose political persuasion can be identified, every one is a long-standing critic of either Mr Johnson, the Conservative Party or Brexit. Their number includes two Labour donors, two communists (one former, one practising), eight who endorsed Jeremy Corbyn at the last election and a Momentum activist who last year described the Government as ‘a coalition built on inequalities, prejudice and fear’.

The committee does not, on the face of things, appear to contain a single member who was among the 43.6 per cent who voted for Mr Johnson in December. Neither does it seem to contain anyone who was in the 52 per cent of voters who chose to leave the EU in 2016.

One member, Elias Mossialos, has shared tweets comparing Jacob Rees-Mogg to a member of the Ku Klux Klan. Another, Anthony Costello, called Mr Johnson a ‘narcissistic psychopath’, suggesting during the last election that he ‘lies, cheats on women, and only cares for the rich’.

A third, Remain activist Martin McKee, has written a book attacking Conservative health policy and some time ago dubbed the Prime Minister a liar who has been ‘taking scientists for fools’. And so on.

So much for being ‘unbiased’ – although it must be stressed that these and other remarks indicating the panel’s political leanings were made long before the coronavirus crisis.

Then there’s the question of whether Sir David’s supposedly ‘independent’ panel – the issue of who is funding it is not addressed on its slick website – is likely to deliver ‘robust’ advice.

Here, history has another lesson for us which seems to have gone unmentioned in the various soft-soaping interviews Sir David has enjoyed. Namely, his involvement in perhaps one of the most egregious public health calamity of modern times – the decision by Tony Blair’s government to dramatically cut fuel duty for diesel cars.

The appallingly misguided policy was implemented at Sir David’s behest in the early 2000s as part of the effort to reduce the nation’s carbon emissions. Obsessed by climate change, Sir David hit on the idea of encouraging motorists to drive diesel cars because they produced roughly 15 per cent less carbon than petrol ones.

As the government slashed fuel duty and other taxes for diesel drivers, millions dutifully bought the vehicles. At which point, it became apparent the nitrous oxide and other pollutants they belched out were causing severe and often fatal respiratory problems to members of the public.

Sir David ought to have been well aware of this, since the European Respiratory Journal had in 2001 published a review linking diesel cars to lung problems, and showing that they produced 100 times as many particulates as their petrol counterparts.

However, he appears to have been persuaded of the case for diesel by car manufacturers who, as we now know, were cheating on their emissions tests. As a result of this widespread adoption of the filthy fuel, tens of thousands of Britons have lost their lives.

By 2017, nitrous oxide was contributing to the premature deaths of 12,000 people a year in the UK. At which point Sir David gave an interview admitting: ‘It turns out we were wrong.’

That nonchalant remark provided little comfort to motorists he’d cajoled into investing tens of thousands in diesel cars – cars which have now plummeted in value as duties on them have been increased dramatically to discourage their use.

Neither was it much comfort to the family of Ella Kissi-Debrah, a nine-yearold who in 2013 died from a serious asthma attack which they believe was brought about by appalling pollution near her home next to the trafficjammed South Circular road in Lewisham, south-east London.

An inquest this summer will establish whether government policy contributed to her death. Elsewhere during his tenure as chief scientific adviser, which ended in 2007, Sir David presided over the Blair government’s response to the foot-and-mouth epidemic which saw a highly controversial mass cull of livestock, he annoyed environmentalists by endorsing GM foods – and he upset the animal rights lobby by supporting a cull of badgers to control TB.

The latter policy has, coincidentally, been recently opposed by the Johnson administration, possibly at the behest of his fiancée Carrie Symonds.

Further bad blood between Sir David and the Prime Minister appears to revolve around his spell as Special Representative on Climate Change to the Foreign Secretary between 2013 and 2017.

The duo had fallen out in 2009, in an obscure dispute over Mr Johnson’s enthusiasm, as Mayor of London, for a project to build an airport in the Thames estuary. They then had to work together again when Boris took the helm at the Foreign Office in 2016.

In an interview during last year’s Tory leadership race, Sir David claimed Mr Johnson had during this period overseen ‘severely damaging’ cuts to Britain’s efforts to fight climate change, and expressed alarm at the prospect of him becoming PM.

Around the same time, he campaigned for a second Brexit referendum, using Twitter to circulate a comment by trade unionist Manuel Cortes saying ‘Brexit is an alt-right project which the Labour movement must defeat’.

By the standards of fellow members of his panel, that’s run-of the-mill stuff. But it does suggest that Sir David might have an agenda. Little wonder his claim to offer ‘robust, unbiased advice’ is making ministers fume.