Strapped for cash Harvey? Weinstein sues Fiat Chrysler for $5M over 2019 crash when ‘Jeep’s brakes failed’ and he flipped while trying to avoid a deer – leaving him ‘catastrophically injured’

Disgraced Hollywood movie producer Harvey Weinstein is suing Fiat Chrysler Automobiles for $5 million plus interest over a 2019 crash in which he flipped a Jeep Wrangler while trying to avoid a deer.

Lawyers for the now-incarcerated mogul filed the suit in New York Supreme Court on Tuesday, claiming the car company provided him with an ‘unreasonably dangerous’ car in exchange for product placement in one of his films.

Then when he was driving in suburban Bedford, New York on August 17, 2019, his 2017 his 2017 Jeep Wrangler ‘failed to decelerate despite Weinstein’s application of the vehicle’s braking system’ as he approached a deer.

He then reportedly swerved to avoid the deer, the lawsuit claims, causing the vehicle to flip over – leaving him ‘catastrophically injured and rendered paralyzed’ and with ‘significant and continuing conscious pain and suffering.’

Weinstein, 70, underwent back surgery that December, and was seen hunched over a walker as he stood trial in New York for sexual assault.

He now claims in the court documents that Chrysler executives were negligent in the crash, writing that they failed to inspect, maintain and repair the Jeep before the crash – about 40 miles north of Manhattan.

Weinstein is currently serving a 23-year prison sentence for sexual assault and rape as he also awaits trial in Los Angeles on other alleged sex crimes from 2004 to 2013.

He has pleaded not guilty to those charges, and has denied any non-consensual sexual encounters. 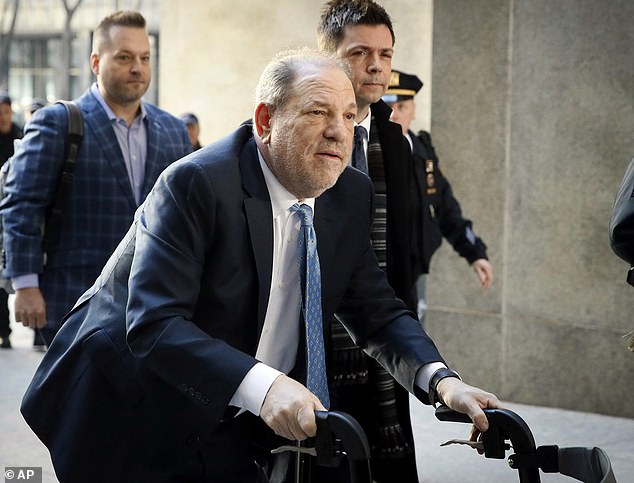 Disgraced Hollywood movie producer Harvey Weinstein was seen hunched over a walker as he stood trial in New York for sexual assault in February 2020, just months after he crashed his 2017 Jeep Wrangler in Bedford, New York while trying to avoid a deer 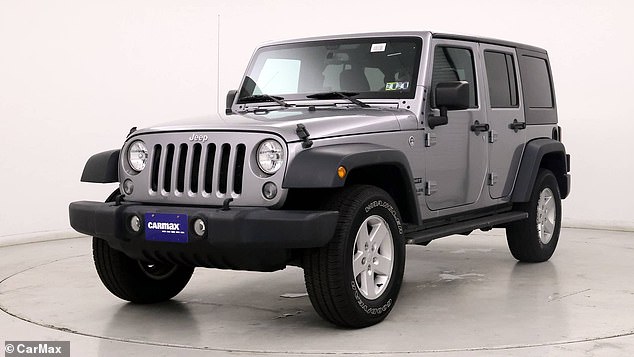 Weinstein, 70, claims in court documents that Chrysler provided him with the Wrangler (like the one seen here) in exchange for product placement in one of his films but knowingly gave him a defective vehicle 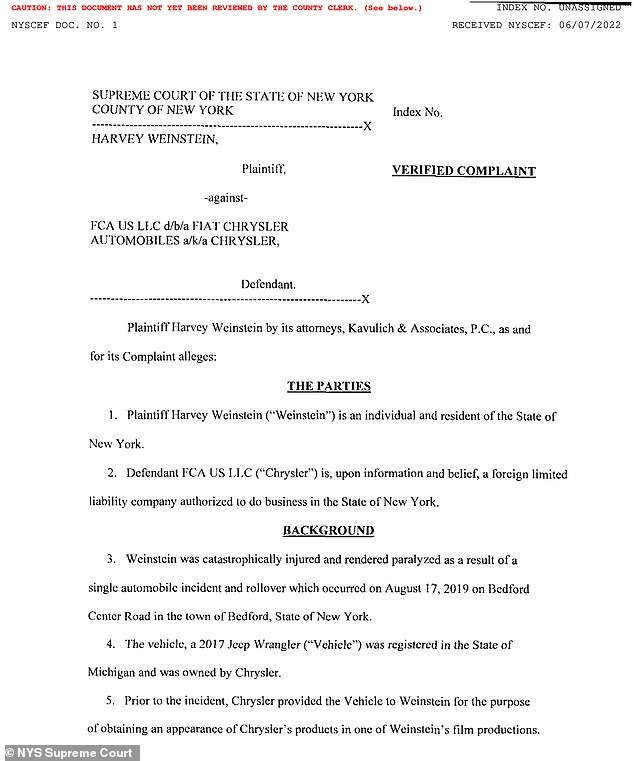 Weinstein got into the crash in upstate New York as he was set to face trial for his sexual advances on aspiring female actresses and colleagues.

He was driving through Bedford at around 8.55am that morning, when he reportedly swerved to avoid the deer and smashed his car into a tree along Bedford Center Road.

Witnesses said at the time that the car wound up on its side, and Weinstein had to kick his way out, according to Page Six.

‘The actions of Chrysler as set forth above constitute willful and wanton misconduct in disregard for the rights and safety of Weinstein,’ the lawsuit states, arguing that the company ‘breached implied and express warranties.’

It notes that Weinstein was wearing his seatbelt at the time, and has ‘suffered severe, permanent, painful and debilitating injuries, and has been caused to endure hospital and medical care and has been incapacitated from performing his usual activities and duties for a long time.’

According to attorney Gary Kaulich, who is representing the disgraced producer in the lawsuit, those injuries include ‘severe spine and back injuries.’

He told the New York Post on Tuesday that Weinstein has previously tried to settle with Chrysler outside of court, saying: ‘Negotiations went on for months and months, but Chrysler apparently never had any intention of resolving the case in good faith.’

DailyMail.com has reached out to Stellantis, which now owns FCA US, for comment.

The lawsuit comes just days after a New York State appeals court upheld his conviction for sexual assault and rape.

On Thursday, a five-judge panel in the state’s intermediate appeals court rejected his claims that the judge in his landmark #MeToo trial prejudiced him by allowing women to testify about allegations that weren´t part of the criminal case.

Allegations against Weinstein first exploded in 2017, with a total of nearly 90 women – including Angelina Jolie, Gwyneth Paltrow and Salma Hayek accusing him of harassment or assault.

He has maintained that all his sexual encounters were consensual.

But in a 45-page ruling on Thursday, the appellate court said trial Judge James Burke properly exercised his discretion in allowing prosecutors to bolster their case with testimony from three women who accused Weinstein of violated them but whose claims did not lead to charges in the New York case.

The judges said that although the volume of material, pertaining to 28 alleged acts over 30 years, was ‘unquestionably large, and, at first blush, perhaps appears to be troublingly so,’ Burke properly exercised his discretion in weighing its relevance to the case.

They also rejected Weinstein´s argument that Burke was wrong in other ways: by allowing a woman who had written a novel involving predatory older men to remain on the jury, and by letting prosecutors have an expert on victim behavior and rape myths testify. Burke did not allow testimony on similar subjects from defense experts.

Weinstein´s spokesperson, Juda Engelmayer, said his legal team ‘was disappointed, but not surprised’ by the decision.

‘We are reviewing all of our options and we will seek to petition the court appeals and beyond,’ Engelmayer said in a statement, CNN reported.