Somewhere in the rainforest a monkey screeches and our guide, visibly alarmed, turns and presses a finger to his lips.

‘That monkey only makes noise when he sees people or animals,’ Andre whispers, scanning the thicket of trees for armed intruders.

Adriano and his brother Andre, by his side, are leaders of the Karipuna people, which has inhabited and protected this corner of the Brazilian Amazon for generations.

Now this region, the so-called lungs of the world and the ancient home to a fifth of Earth’s plant and animal species, is being systematically – and illegally – destroyed. 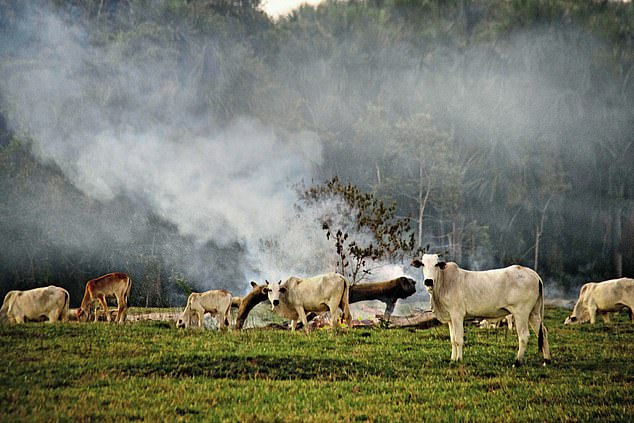 Environmental campaigners have accused manufacturing giants, such as Land Rover, of fuelling the rainforest’s destruction as deforestation increases by 75%

Despite agreements signed at the COP26 climate summit in Glasgow last year, deforestation increased by 75 per cent under outgoing Brazilian president Jair Bolsonaro.

Almost daily, swathes of rainforest are torched and hacked down to make way for cattle. The rapidly expanding industry meets, not just the global beef demand, but the growing appetite for luxurious leather car seats.

On this particular day our guides were concerned about encountering gun-toting ranchers invading their land. We could not turn back, our boat was moored on a river bank, a two-hour slog through dense undergrowth.

So we stood in silence punctured only by the rhythmic chorus of cicadas. Finally after a tense few minutes, Adriano gave the all clear. We were lucky. We continued our trek and soon found a clearing where only days earlier ancient giant trees had stood.

For some time Adriano’s people have watched powerless as the Jaci Parana Reserve, supposedly a protected area of the rainforest, has been torn apart by land-grabbers. In all, an area almost three-quarters the size of London has disappeared from the reserve.

Adriano blames car manufacturers for fuelling this problem as ranchers seek more pasture for cattle to produce the lucrative hides. ‘To get leather hides you need to cut the trees first,’ he said. ‘If there’s no leather, there’s no deforestation.’

To investigate the trade, I spent three weeks travelling by boat with the brothers through this stretch of Amazon, to the port city of Porto Velho and to the slaughterhouses supplied with cattle by the illegal Jaci Parana ranches in Rondonia state. 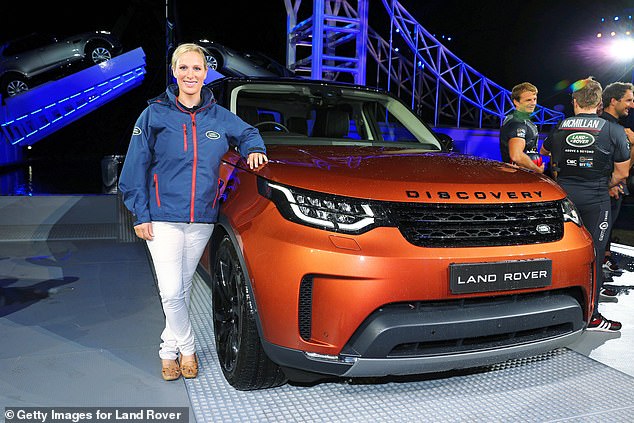 Jaguar Land Rover, a much-loved British marque, have been accused of sourcing leather products from Lear Corporation run a significant risk of contributing to illegal deforestation in the Amazon

‘I feel a great sadness with all this destruction,’ said Adriano. ‘It hurts when we see the forest ending this way.’

The area is the focus of a report published this week by the Environmental Investigation Agency in Washington DC, which shows how the cattle raised on illegally deforested land enter supply chains of three major leather processors in Brazil: JBS, the world’s largest leather producer, Viposa and Vancouros.

JBS and Vancouros supply Lear Corporation, which makes car seats. Lear admits sourcing 70 per cent of its leather from Brazil and claims to control about 30 per cent of the global market for leather seating.

One of those manufacturers mentioned in the EIA investigation is historic car maker Jaguar Land Rover, a much-loved British marque, which produces Range Rovers and other vehicles favoured by Royals, the military and celebrities.

In 2020 a Vancouros representative told EIA investigators that hides from Brazil were used in the £55,000 Range Rover Evoque and at least two American car models.

‘Even Land Rover, also they use Brazilian hides,’ says the representative.

The EIA investigator replies: ‘What kind of model?’

‘The Evoque. Evoque is our hides also.’

The EIA identified thousands of cattle raised on illegal farms and said that due to risks in the supply chains of JBS, Vancouros and Viposa, major car manufacturers sourcing leather products from Lear Corporation run a significant risk of contributing to illegal deforestation in the Amazon.

As we began our investigation, we quickly discovered that prying journalists were not welcome in the region. When we stopped to capture images of a giant billboard featuring cattle alongside a beaming Bolsonaro – still a hero among the ranchers even after losing the recent presidential elections – a big pick-up truck with tinted windows pulled up alongside us. It looked like someone was capturing images from inside the vehicle. ‘We’ve been marked, this is not good,’ said our driver. ‘We need to move, now,’ he added.

Between 2018 and May 2022 data obtained by the EIA shows that more than 6,000 cattle were sourced from dozens of illegal farms inside the protected area by slaughterhouses. One abattoir received more than 1,000 animals from just one farm listed in the name of a woman called Andreia Correa de Paiva. In pictures posted online she appears fashionably dressed, in her mid twenties, and far from our imagined notions of frontier ranchers. 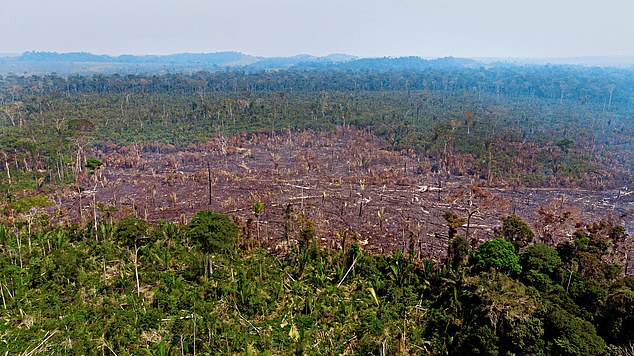 Almost daily, many parts of rainforests are torched and hacked down to make way for cattle

When we asked at the farm if we could speak to her, we were told: ‘No one is here, they are all in the town.’ We eventually reached her on the phone, but when we mentioned the ranch the line went dead.

Next we travelled six hours south along a highway that cuts through what was once prime rainforest.

We parked discreetly near the entrance to the Irmaos Goncalvez slaughterhouse and waited, watching as cattle trucks crawled in through the gate to deliver livestock.

By late afternoon the first workers began to emerged. ‘It’s been a busy day,’ said one, before detailing the industrial scale of the operations. ‘Today we’ve slaughtered 1,326 cows.’

Just after 5.30pm a truck crawled through the gate, crammed with those 1,326 hides from animals slaughtered during the day. We followed it along the highway for 90 minutes to a sprawling facility in another town, Ji Parana.

The EIA claims the hides are treated here before being sent from the tannery Blu America to finishing facilities in southern Brazil. From there they are exported around the world for use in luxury vehicles.

The tanneries run by JBS and Vancouros and Viposa have the combined capacity to process around 10,000 hides per day, which accounts for the vast majority of the cattle slaughtered in Rondonia. Failure to monitor their full supply chains leaves the companies exposed to illegal deforestation.

Bruno Vinicius, the executive director of Rondonia’s Agriculture Ministry, acknowledged that there was a ‘problem’ and admitted that hides from illegally raised cattle were making their way into supply chains. ‘It’s funny when a company works toward an electric engine, to be a “green” car, yet they buy leather that could be a by-product of an illegal area, a deforested area,’ he said.

He insisted that car manufacturers, including Jaguar Land Rover, had to take responsibility. ‘It’s everyone’s jobs to keep an eye on it, to monitor it,’ he said. ‘The job from Land Rover is to see if they really care about the environment. If they don’t they can keep buying whatever they are buying, but if they do they should at least… do something.’

Referring to Land Rover, he added: ‘They do not trace whether all the leather is from a legal place. That’s my point of view.’

Jaguar Land Rover said in a statement that it was ‘committed to ensuring our entire supply chain upholds our sustainability and social responsibility standards, and we work with non-profit organisation CDP to annually assess our global supply chains in relation to forestry’.

It added: ‘We are committed to greater transparency across our entire supply chain and we take this notification seriously. The integrity of our actions and those of the people we do business with is vital for our continued success.’

JBS said it used satellite imagery to monitor its suppliers in every Brazilian biome where it operates.

‘The challenge for JBS, and for the beef cattle supply chain in general, is to guarantee this same control over the suppliers of its suppliers,’ said a spokesman.

Lear said: ‘Lear is committed to preserving the global environment and we recognise the importance of protecting forests, including the Brazilian Amazon, as part of that commitment.

‘We use a robust sourcing process to ensure we are collaborating with top Leather Working Group rated suppliers that are committed to purchasing hides from cattle reared on compliant farms.

‘We take all allegations of non-compliance with our policies and procedures by our suppliers very seriously. If a supplier violates any of our policies or requirements, such as supplying hides from a non-compliant source, we will investigate and respond accordingly, up to and including, as appropriate, immediate termination of our contract and/or legal action against the supplier.’

Vancouros did not respond to repeated requests to comment.