Anti-HS2 protesters have spent the six-week lockdown in a tree-top campsite in ancient woodland which is being destroyed to make way for the high-speed railway.

Protesters have spent the last six weeks camping out in ancient trees which are set to be felled along the proposed route in Crackley Woods, Kenilworth, Warkwickshire.

Dozens of campaigners from Extinction Rebellion and the Stop HS2 groups have joined forces to reside at the makeshift camps in the under-threat forests.

Their camp of around 20 tents and camper vans has been blocking work sites and is said to feature a roundhouse built from hay bales complete with a field kitchen.

Those at the so-called Protection Camp spend their days up trees, with protestors claiming they are self-isolating amid the coronavirus crisis as one large household would.

It comes as demonstrations across 20 other sites including Euston Station, London also took place amid the coronavirus crisis today, with protesters blocking access to building sites for the railway. 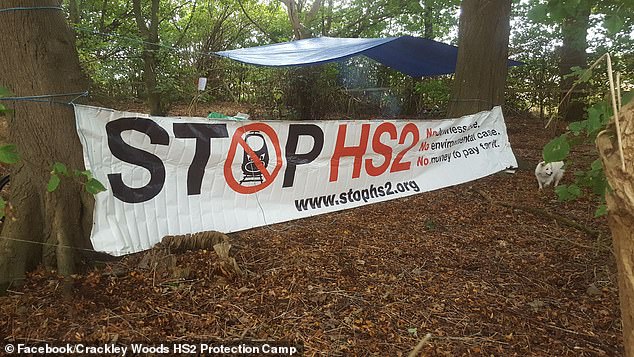 The protesters, dubbed the ‘Crackley Woods HS2 Protection Camp’, have chosen to self isolate in the woodland near Kenilworth, Warwickshire in a camp made up of a roundhouse made from hay bales, a field kitchen, and around 20 tent 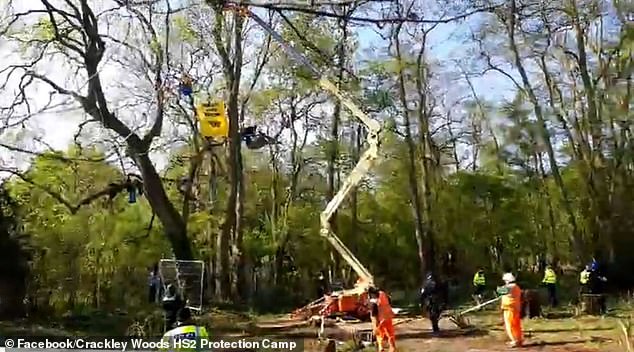 The camp was initially made up of locals from a Stop HS2 campaign group, but now includes people from other organisations such as Extinction Rebellion (Pictured: HS2 contractors in Crackley Woods)

Demonstrators arrived at Crackley Woods six weeks ago as trees in the woodland began to be felled, despite HS2 contractors erecting fences to keep protestors out.

The group instead built tree-houses and a gantry on land adjacent to the work site so they could see across the fence and witness what is happening inside the woodland, the BBC reported.

In a video posted by Extinction Rebellion today, more demonstrators are seen arriving at Crackley Woods with banners reading ‘NHS not HS2’ as contractors lining the entrance to the site insist they must keep a two-metre distance.

In another clip from April 9, a protestor pans across a landscape void of trees as he explains how ‘the old oaks’ which were once at the back of the shot have now ‘gone.’

‘It’s a bit of a devastating scene really if you knew this area at all,’ he continues. ‘Within another day or two all of this will be completely cleared and flattened.’

Some 11 campaigners, six of whom were in trees and five who were on the group, were arrested at the site following their arrival on March 27, Extinction Rebellion said. 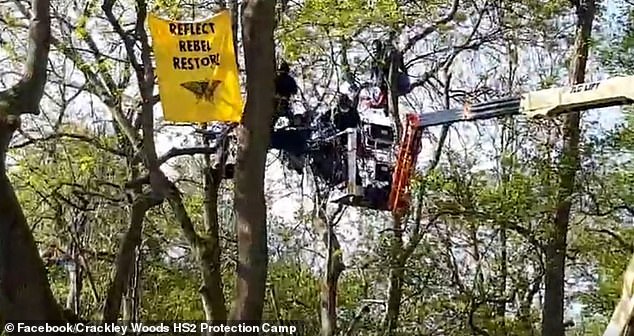 Pictured: A ‘reflect, rebel, restore’ sign seen in a tree in Crackley Woods amid the protest 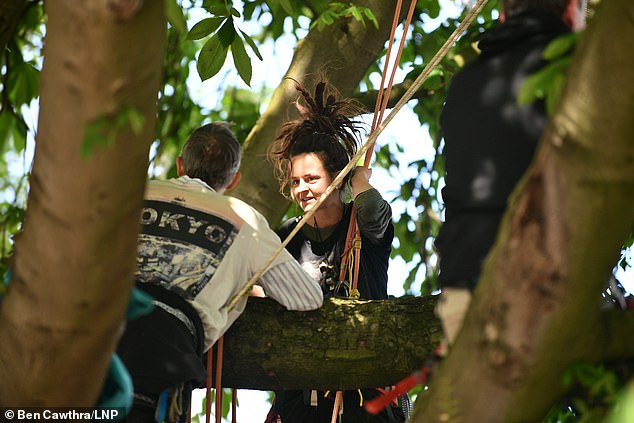 Pictured: Members of environmental protest group Extinction Rebellion in trees outside Euston Station in London, to protest against the building of the HS2 rail project

The protesters had arrived at Crackley Woods ahead of the High Court’s decision to green light the clearing of the woods on April 3.

Two judges had refused an emergency injunction and judicial review of the government’s decision to proceed with the high-speed railway, stating the review had ‘no real prospect of success.’

The felling of woodlands has been widely condemned by wildlife charities and conservationist Chris Packham, who had attempted to halt ‘enabling’ the works with an emergency injunction, the Guardian reported.

Campaigners have claimed some 108 ancient woods could be destroyed by the high-speed railway, though HS2 insists this is an exaggeration.

Paul Faulkner, chief executive of Greater Birmingham Chambers of Commerce, told the BBC only a ‘tiny fraction’ of the country’s ancient woodland will be cleared. 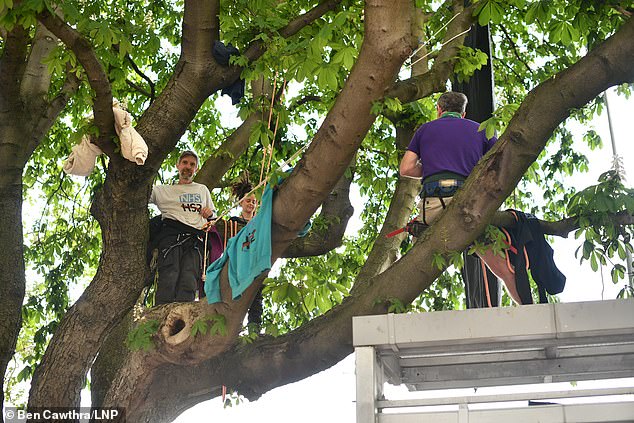 Demonstrations across 20 other sites including London also took place amid the coronavirus crisis today, with protesters blocking access to building sites for the railway 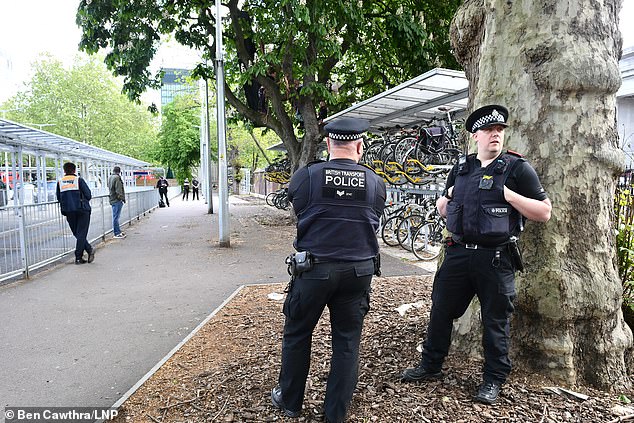 The group, who call themselves HS2 Rebellion, claim the work is non-essential and that, by failing to stop during the lockdown, it is putting the lives of workers and their families at risk

He added: ‘HS2 is aiming to be the world’s most sustainable high-speed railway. It’s got a whole host of pro-environmental measures that it’s introducing, and that’s before we get on to the massive economic benefits that HS2 is going to bring.’

Demonstrations across 20 other sites including London also took place amid the coronavirus crisis today, with protesters blocking access to building sites for the railway.

The group, who call themselves HS2 Rebellion, claim the work is non-essential and that, by failing to stop during the lockdown, it is putting the lives of workers and their families at risk.

They say that health workers remain without personal protective equipment (PPE) and that money used for construction projects should be channelled to such medical supplies instead.

The protesters said they were respecting social distancing guidelines by wearing gloves and masks and claimed the actions were part of their state-sanctioned daily exercise. 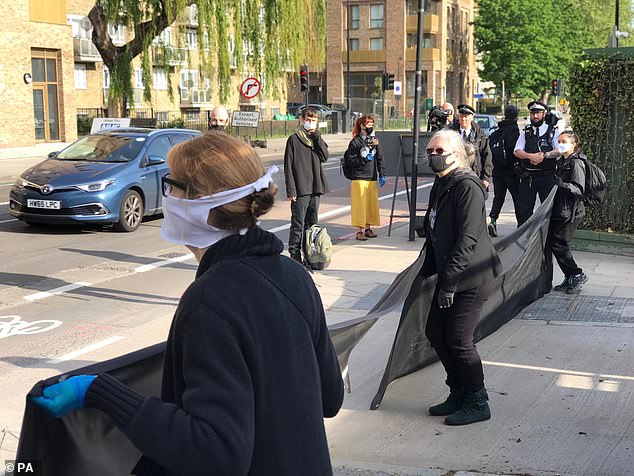 Pictured: Members of the HS2 Rebellion group wear face masks and gloves as they protest outside Euston Station 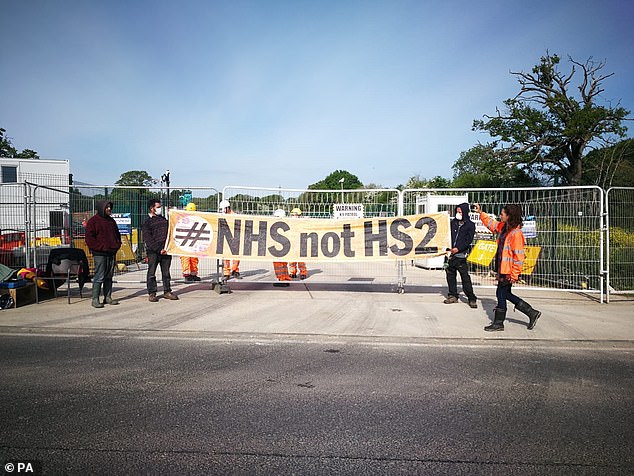 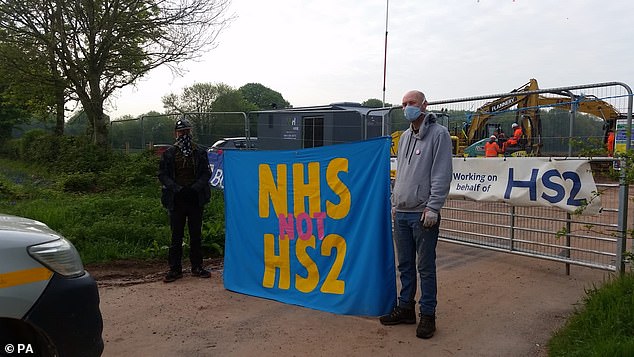 ‘Our nurses and doctors are without PPE, yet these workers can continue because the Government deems them key workers,’ said one, in a video posted online.

‘Our real key essential workers are without PPE because of projects like this.’

A statement said the HS2 Rebellion ‘wish to emphasise the public resistance to HS2’S destruction of our ancient woodland and wildlife habitats, and HS2’S failure to stop construction works at multiple sites breaching HSE Covid guidelines and exposing their workers, protesters, families and communities to unnecessary risk during a national health crisis’.

A spokesperson for HS2 has been contacted for comment.