Planet of the apes! Hundreds of hungry monkeys swarm across Thai street as ‘rival gangs’ fight over food after tourists who normally feed them stay away because of coronavirus

Hundreds of hungry monkeys were seen fighting over a single banana in Thailand after coronavirus caused a huge drop in the numbers of tourists who feed them.

The primates are normally well fed by tourists in Lopburi, central Thailand, but visitors have plummeted because of the COVID-19 virus which is gripping the world.

The animals were reported to be part of two ‘rival gangs’ made up of the monkeys who dwell in the city and those from the temple areas who were fighting over food.

Footage shows hundreds of monkeys crossing a road and then chasing a single monkey which has got hold of a banana. 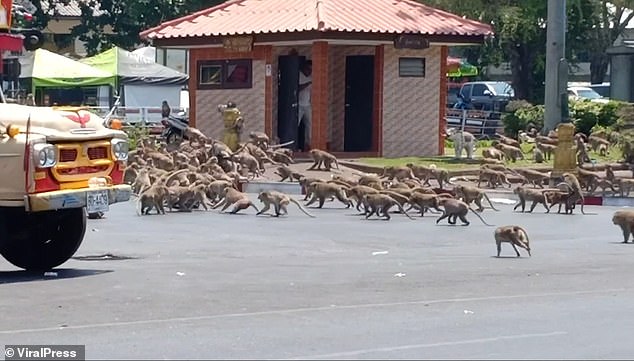 Hundreds of monkeys in Lopburi, central Thailand, fight over a single banana after coronavirus caused a huge drop in the numbers of tourists who feed them

At first the primates are seen running independently as they appear to look for food.

But then the noise of their cries increases dramatically as dozens chase a single monkey which seems to have a banana.

They are seen jumping on it and others as they fight over the food.

Even locals who are used to seeing the monkeys were shocked by their ferocity.

Onlooker Sasaluk Rattanachai captured the scene from outside a shop where she works.

She said: ‘They looked more like wild dogs than monkeys. They went crazy for the single piece of food. I’ve never seen them this aggressive. 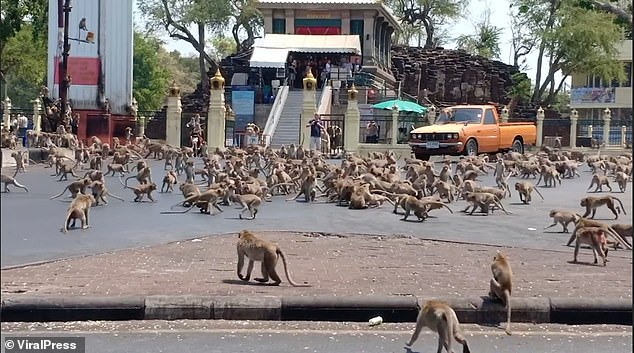 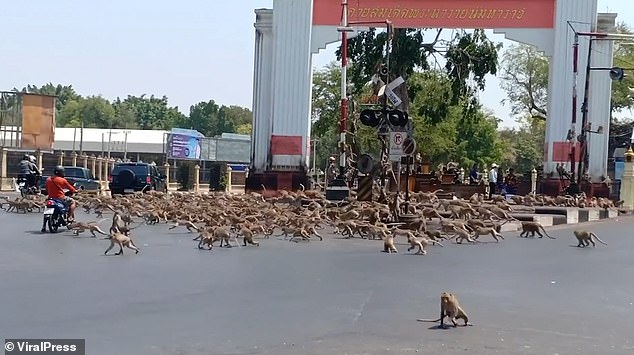 ‘I think the monkeys were very, very hungry. There’s normally a lot of tourists here to feed the monkeys but now there are not as many, because of the coronavirus.’

Lopburi is home to thousands of wild monkeys that roam the streets and buildings. Many live in the grounds of the city’s ancient Buddhist temples. 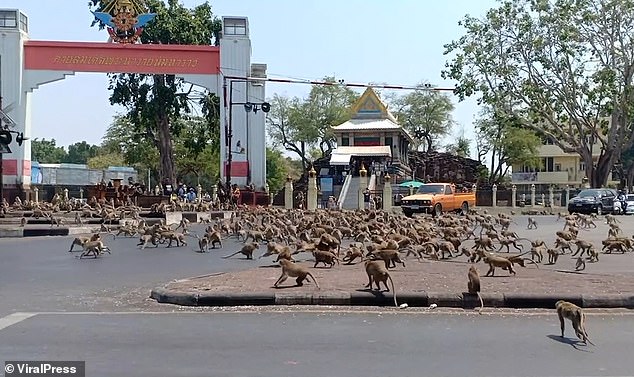 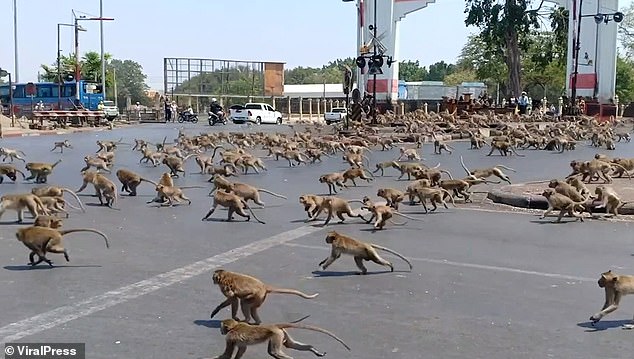 There have been 59 cases of coronavirus in the Thailand, with one death

With their territories divided by a train track, the two groups do not ordinarily meet, but ended up doing so on Wednesday, leading to the fight.

But the hunger experienced by the temple monkeys may have led them into the city in search of food.

And Somchai Unakong, 75, a resident, suggested to Thai news outlet Manager online that the fight might have been down to coronavirus.

He said: ‘Did this relate to the Covid-19 virus that is spreading? I wondered.’ 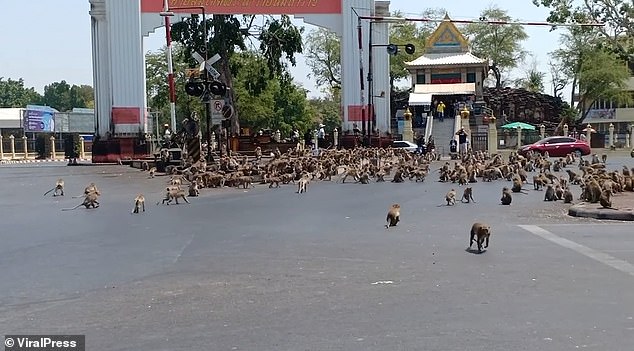 The monkeys’ territories are normally divided by a train track but the hunger experienced by those living in the temple areas saw them venture into the city centre, it was claimed 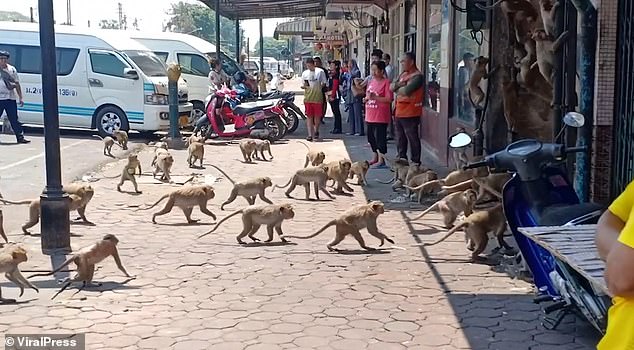 Last month it emerged that the monkeys elsewhere in country were suffering because coronavirus is causing tourist arrivals to plunge by 44 per cent.

Primates living in a public park in Songkhla, southern Thailand, are usually well fed by visiting tourists from Malaysia and China.

There have been 59 cases of the virus in the Thailand, with one death.

However, in nearby China, where the outbreak began, more than 80,000 people have been infected, with more than 3,000 deaths.

And Thailand’s economy is reliant on Chinese tourists.

Tourism accounts for 18 per cent of Thailand’s GDP, with Chinese holidaymakers making up more than a quarter of total arrivals.

The country’s tourism minister previously warned a crisis on the scale of the Sars outbreak could cost an estimated $1.6 billion (£1.2 billion).