New Delhi: India has fast tracked COVID-19 vaccine procurement and will provide free shots to citizens above 18 years, Prime Minister Narendra Modi said in an address to the nation.

The South Asian nation faces the challenge of vaccinating its large adult population as it emerges from a devastating second coronavirus wave. The country has struggled to ramp up domestic production and procure doses internationally forcing some vaccination centres to close. 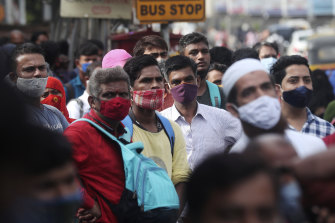 People wait at a bus stop as restrictions ease in Mumbai, India, on Monday.Credit:AP

Modi’s speech came against the backdrop of a near breakdown in health infrastructure over the last two months, with major Indian cities running out of oxygen and hospitals flooded with patients, while crematoriums struggled to keep pace with the number COVID-19 victims. His administration has come under intense criticism over its handling of the second wave and the vaccination rollout. Its popularity rating has fallen from 75 per cent in 2019 to 51 per cent this year, according to the Local Circle polling company.

While experts are worried about the slow vaccine rollout, state politicians have blamed the federal government for forcing them to compete against each other to procure vaccines, with the country’s top court criticising Modi’s policy as “arbitrary and irrational”.

India has administrated 232 million doses since January 16, with 3.4 per cent of the population now fully immunised. At this pace, it will take another 22 months to immunise 75 per cent of the country, according to Bloomberg Vaccination Tracker.

While the federal government gives free vaccines to those over 45 and frontline workers, state governments and private hospitals have until now been left to inoculate people aged 18 to 45 for a fee.

The government has said more than 2 billion doses will be available by December — enough to vaccinate the adult population — but there is no indication the main vaccine manufacturers in India will be able to ramp up production to meet that goal, nor whether India will be able to purchase doses from overseas to make up the shortfall.

Modi last addressed the nation on April 20, when he urged states to avoid lockdowns even as the country was heading towards record daily infections of more than 414,000. Soaring new cases and a spike in daily deaths forced both the financial and political capitals, Mumbai and New Delhi, to impose restrictions on movement, as citizens took to social media in a desperate search for oxygen and life-saving medicines.

The wave has been steadily declining since the peak on May 7, and New Delhi and Mumbai began to ease their lockdowns on Monday when India reported 100,636 new infections and 2427 deaths.