Iran has released 54,000 prisoners to avoid spreading coronavirus after its cases soared to more than 2,300 today, including 77 deaths.

Tehran’s judiciary said the inmates were allowed out only after testing negative for COVID-19 and posting bail, while ‘security prisoners’ jailed for more than five years would not be released.

It comes amid fears that British-Iranian prisoner Nazanin Zaghari-Ratcliffe, 41, might have contracted the deadly contagion after her husband Richard Ratcliffe said she was suffering from cold-like symptoms over the weekend but had not been tested.

A judiciary spokesman poured scorn on the concerns yesterday and said Mrs Zaghari-Ratcliffe was in good health. The Ayotallah meanwhile has been putting up a similarly combative front despite one of his most trusted advisers dying and eight percent of his parliament infected. 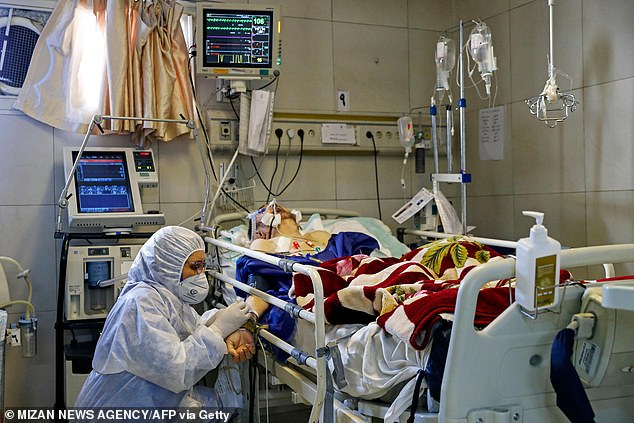 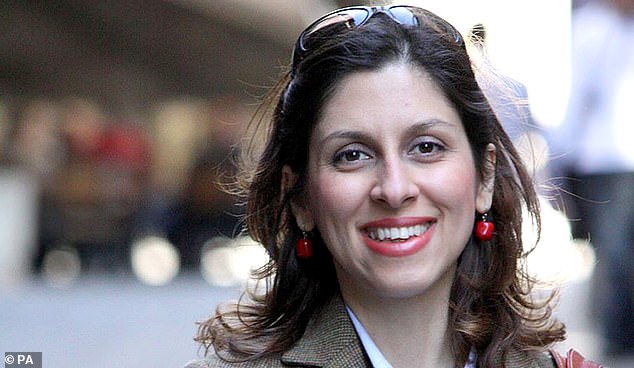 British-Iranian prisoner Nazanin Zaghari-Ratcliffe, 41, might have the deadly contagion her husband said as the Foreign Office calls on Tehran to provide medical intervention

‘This calamity is not that big of a deal, and that there have been bigger ones in the past,’ Khamenei said yesterday while wearing a pair of protective gloves. ‘I do not want to underestimate this issue of course, but let us not overestimate it either.’

The Foreign Office has called on the Iranian government to immediately see to it that Mrs Zaghari-Ratcliffe, who was jailed on spurious espionage charges, be assessed by medical professionals.

Yesterday, Labour MP Tulip Siddiq tweeted that Mrs Zaghari-Ratcliffe had been granted a furlough either yesterday or today to visit her family.

However, the Iranian ambassador to the UK Hamid Baeidinejad referred opaquely to a ‘security prisoner’ being released on furlough and later deleted his tweet. 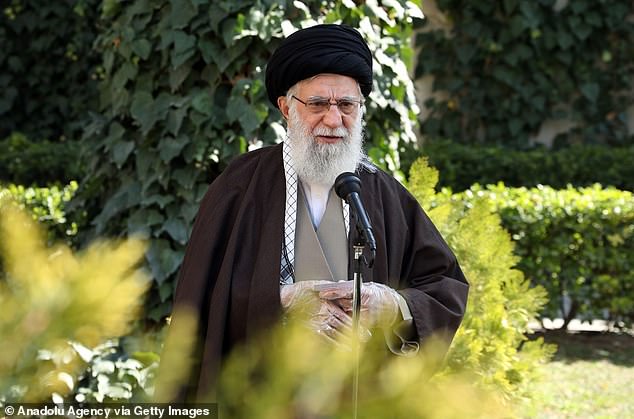 ‘This calamity is not that big of a deal, and that there have been bigger ones in the past,’ Khamenei said yesterday while wearing a pair of protective gloves. ‘I do not want to underestimate this issue of course, but let us not overestimate it either’

On Friday, Mr Ratcliffe said he was concerned about the health of his wife who already suffers from from unexplained collapses to irregular heartbeats.

Sources suggest that she already has coronavirus but warned authorities are likely to supress this information and may deny her tests to prove whether she has it.

Another inmate is believed to have died from the virus and at least four others are said to have it.

Khamenei yesterday reiterated the importance of Islamic faith in guiding the nation after one of his top brass Mohammad Mirmohammadi, member of the Expediency Council which is hand-picked by the Supreme Leader, died aged 71 on Monday.

‘Prayer can solve many problems,’ the Ayatollah said.

Despite this, Iran’s supreme leader has put the Islamic Republic’s armed forces on alert to assist health officials in combating the outbreak.

After downplaying the coronavirus as recently as last week, Iranian authorities have now said they had plans to potentially mobilize 300,000 soldiers and volunteers to confront the virus.

Iranian media reported that 23 members of parliament now had the virus, as well as the head of the country’s emergency services. 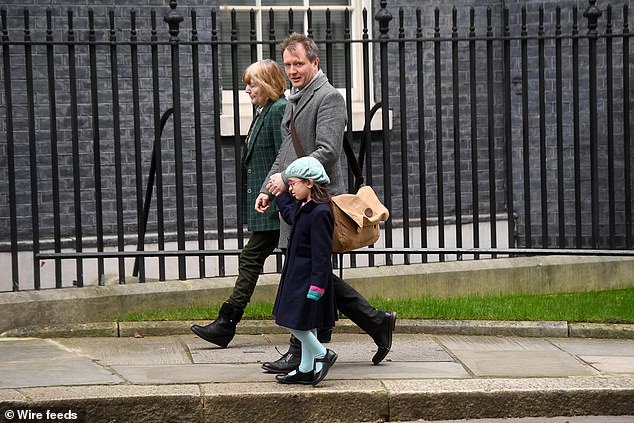 Richard Ratcliffe and the couple´s daughter Gabriella. Ratcliffe has intensified his calls on the British Government to secure his wife’s release

‘Whatever helps public health and prevents the spread of the disease is good and what helps to spread it is sin,’ Khamenei said, who has not worn gloves at past arbor day plantings.

Khamenei also urged citizens to follow the health authorities’ instructions and praised their ‘honesty’ and ‘transparency,’ saying they have been keeping the public up to date since day one.

Mohammad Mirmohammadi is one of several regime members to have caught the virus, after vice president Masoumeh Ebtekar and visibly struggling health minister Iraj Harirchi were also infected.

It comes as the Iranian regime was accused of ‘endangering the lives of Iranians and the world’ after alarming videos of worshippers licking a shrine emerged online.

There are also fears that Iran is covering up the true scale of the crisis, with official figures showing a suspiciously high death rate – suggesting there may be more infections than the regime is willing to admit. 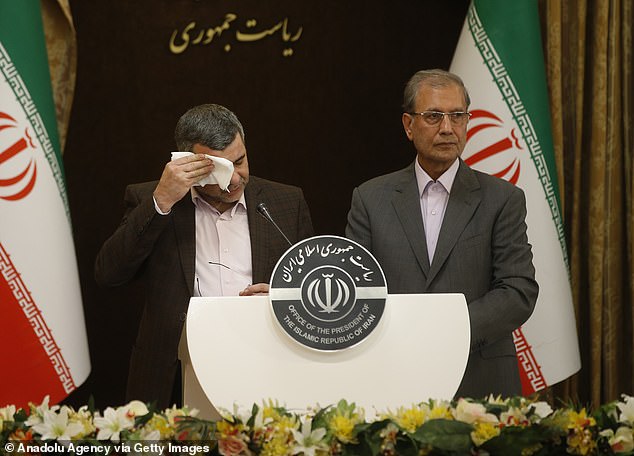 Iran’s claims to have the virus under control lost further credibility last week when the deputy health minister, Iraj Harirchi, was taken into quarantine, just a day after sweating profusely at a press conference (pictured) 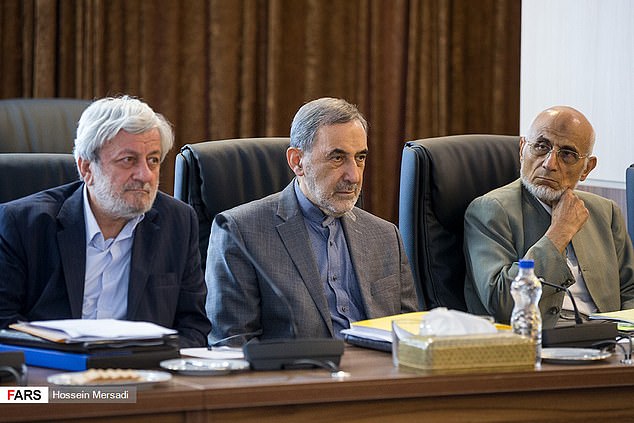 Mohammad Mirmohammadi (pictured left), a member of the Expediency Council which is hand-picked by the Supreme Leader of Iran, died aged 71 after falling sick with coronavirus. In this picture he is seated alongside two other officials, including Ali Akbar Velayti (centre)

The National Council of Resistance of Iran (NCRI), has claimed that the death toll is as high as 650 – nearly ten times the official count.

Experts worry Iran’s percentage of deaths to infections, now around 3.3%, is much higher than other countries, suggesting the number of infections in Iran may be far greater than current figures show.

Iran stands alone in how the virus has affected its government, even compared to hard-hit China, the epicenter of the outbreak.

State media announced Mirmohammadi’s death yesterday morning in the virus’s most direct blow to the regime so far. 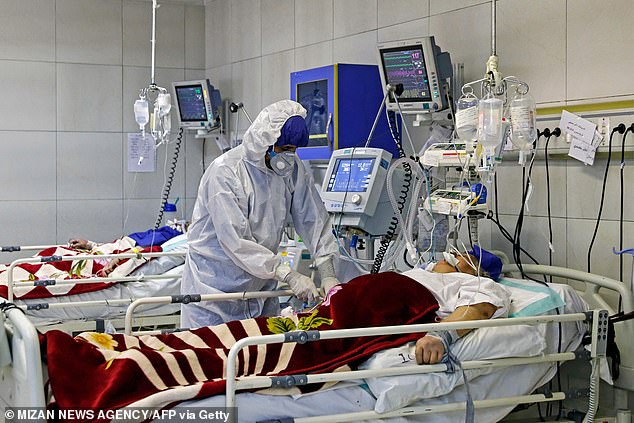 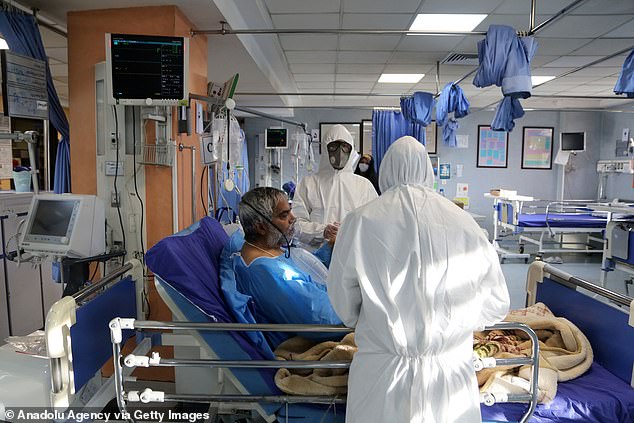 Medical experts, wearing masks and hazmat suits, take care of a patient infected by the coronavirus (COVID-19) at a hospital in Tehran, Iran on Monday 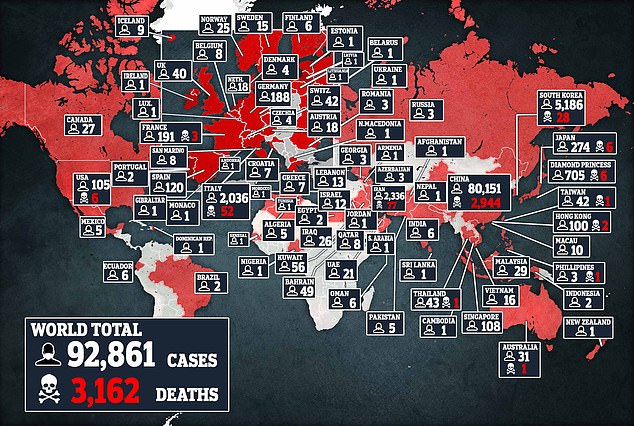 The Expediency Council which he sat on advises the Ayatollah and helps to settle disputes between the Supreme Leader and the Iranian parliament.

He previously served as the head of the presidency under former Presidents Akbar Hashemi Rafsanjani and Ali Khamenei, now the country’s supreme leader.

Mirmohammadi’s mother had died of the coronavirus in recent days as well, Iranian media reported.

Those sick also include Vice President Masoumeh Ebtekar and Iraj Harirchi, the head of an Iranian government task force on the coronavirus who tried to downplay the virus before falling ill.

Nazanin Zaghari-Ratcliffe could be released on furlough from Iran’s notorious Evin prison in Tehran on Wednesday, Hampstead and Kilburn MP Tulip Siddiq said.

The MP tweeted on Tuesday morning: ‘News from Iranian Ambassador that my constituent Nazanin Zaghari-Ratcliffe may be released on furlough today or tomorrow from prison in Iran.

‘If this is true, Nazanin would welcome leaving Evin jail, but we’ve been here before.’

She added: ‘If this furlough happens, the British government has an obligation to make it permanent, and not let her be used as a bargaining chip in the weeks to come. 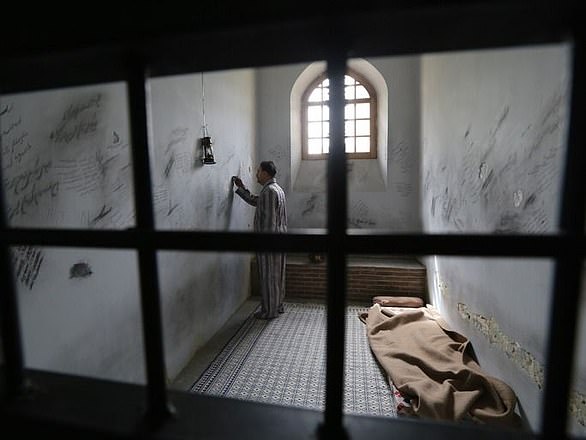 ‘I remain concerned that Nazanin has told her family that she has still not been tested for coronavirus. ‘

Iran is among the worst-hit countries outside of China. As of Tuesday morning, there had been 1,501 cases recorded, with 66 deaths. The outbreak was said to have reached the prison last week.

Hamid Baeidinejad, Iran’s ambassador to the UK, had tweeted: ‘Mr. Esmaili, the spokesman of Iran’s judiciary, announced that Mrs. Nazanin Zaghari is in good health condition and has not been affected with Coronavirus.

‘He added that one of the prisoners with security charge will be granted a furlough today or tomorrow to join family.’

Richard Ratcliffe revealed his wife has been showing the symptoms of coronavirus but has still not been tested.

Mr Ratcliffe said on Monday evening the Iranian ministry of foreign affairs had falsely told the Foreign Office (FCO) that she had been tested for the disease and confirmed to be negative.

But his wife denied she had been tested and he had told the FCO.

Speaking to the PA news agency, Mr Ratcliffe said Mrs Zaghari-Ratcliffe had been told nothing of her potential release as of Monday.

‘Nazanin would be very, very pleased to come out of prison,’ he said. ‘However, I think it is a game by the Iranian authorities to avoid responsibility for testing and treating Nazanin for coronavirus.’

‘And our experience of furlough last time was very negative. It just made us a different kind of bargaining chip and the family were exposed to all sorts of threats from the Revolutionary Guard.’

‘So the UK Government needs to make sure it can protect her and her family.’

Mrs Zaghari-Ratcliffe was arrested at Tehran’s Imam Khomeini airport while travelling with her young daughter, Gabriella, to meet her parents in April 2016.

She was sentenced to five years in prison over allegations of plotting to overthrow the Tehran government.

She has been afforded diplomatic protection by the UK Government, which states that she is innocent and that her treatment by Iran failed to meet obligations under international law.

The British government is understood to be seeking clarification from the Iran on the situation.

An FCO spokesman said: ‘We are urgently seeking information from the Iranian authorities on reports that coronavirus is spreading in Evin prison. We call on the Iranian government to immediately allow health professionals into Evin prison to assess the situation of British-Iranian dual nationals there.’

It is thought in some circles that Mrs Zaghari-Ratcliffe is being held as a bargaining chip to try and hasten the resolution of a £400 million dispute between the UK and Iran over a deal for Chieftain tanks struck in the 1970s.

The row rose over a deal between International Military Services, a venture used by the Ministry of Defence to sell British weapons overseas, and the Iranian defence ministry to sell the Shah of Iran around 1,500 Chieftain tanks and armoured vehicles in 1971. 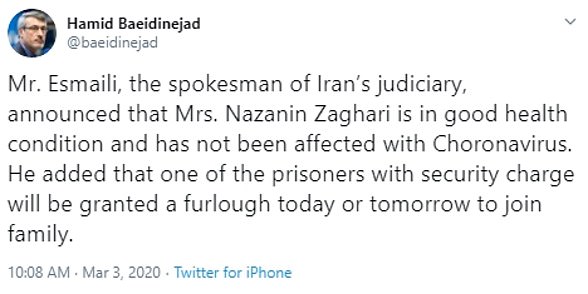 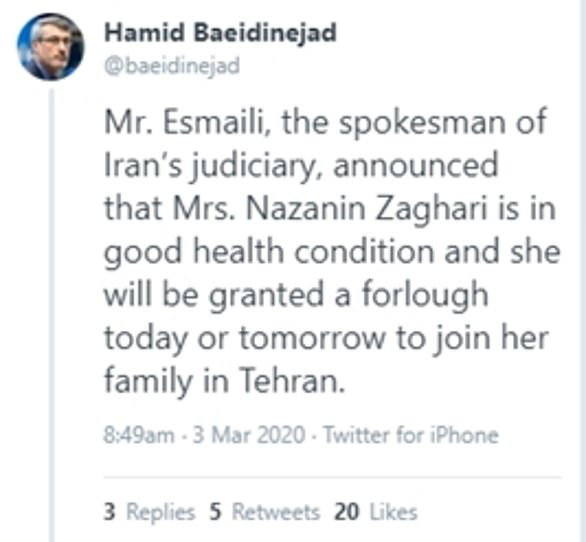 The tweet above was later deleted by Mr Baeidinejad, it states Ms Zaghari Ratcliffe’s release

The contract was terminated after the Shah was deposed in the 1979 revolution, but Iran had already paid for the tanks and demanded its money back.

There are hopes Mrs Zaghari-Ratcliffe could be released if the financial dispute can finally be settled.

Ms Siddiq said in a further statement: ‘If you leave British citizens in harm’s way for long enough, they will come to harm.

‘The Government has important choices to make over Nazanin’s case in the coming months. They must do everything possible to secure her permanent release, including resolving the debt that Britain owes to Iran.

‘Nazanin’s life hangs in the balance. The UK Government can and must act quickly to keep her safe.’