Iran today called on the United States to lift its sanctions to help contain the coronavirus which Tehran says is killing one person every 10 minutes.

President Hassan Rouhani rejected Washington’s offer of humanitarian aid, saying: ‘American leaders are lying. If they want to help Iran, all they need to do is to lift sanctions …. Then we can deal with the coronavirus outbreak.’

Yesterday Ayatollah Ali Khamenei alleged that the virus, which has killed around 1,700 and infected more than 21,000, was designed to target ‘the genetic data of Iranians.’

The 80-year-old ruler ferociously rebuked the American offer, claiming that doctors and medicine sent by the US could be ‘poisoned.’

Washington said it would provide humanitarian assistance to the worst hit Middle Eastern nation despite the recent tensions which peaked in the New Year when the US assassinated Tehran’s highest ranking general. 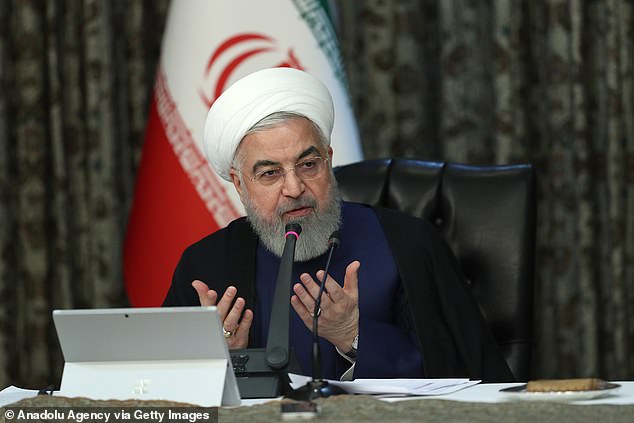 President Hassan Rouhani rejected Washington’s offer of humanitarian aid, saying: ‘American leaders are lying. If they want to help Iran, all they need to do is to lift sanctions …. Then we can deal with the coronavirus outbreak’ 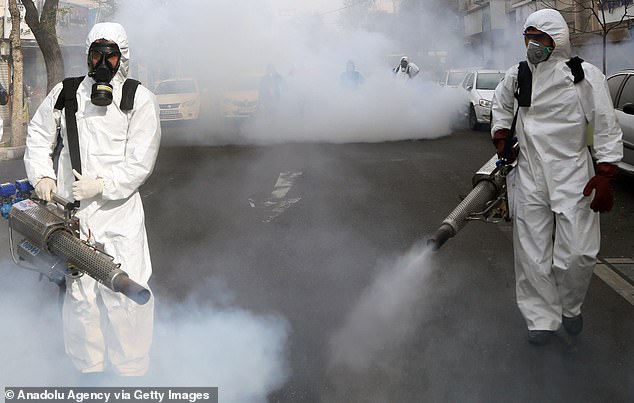 Last week the Ayatollah praised the ‘dazzling sacrifice’ of his medics and asserted that Iran had in fact benefited from US sanctions, which had made them ‘self-sufficient in all areas.’

It came after the country’s health ministry revealed the horrifying scale of the COVID-19 outbreak, saying it was killing one person every minute, a fact which does not tally with its reported death toll.

Khamenei on Sunday referred to an accusation made by Chinese officials about the origins of the virus, saying: ‘I do not know how real this accusation is but when it exists, who in their right mind would trust you to bring them medication? … Possibly your medicine is a way to spread the virus more.’

He said that COVID-19 ‘is specifically built for Iran using the genetic data of Iranians, which they have obtained through different means’.

‘You might send people as doctors and therapists, maybe they would want to come here and see the effect of the poison they have produced in person,’ he added.

Despite Khamenei’s claims that US sanctions had benefited the country, Rouhani and other officials have urged Washington to lift the penalties. 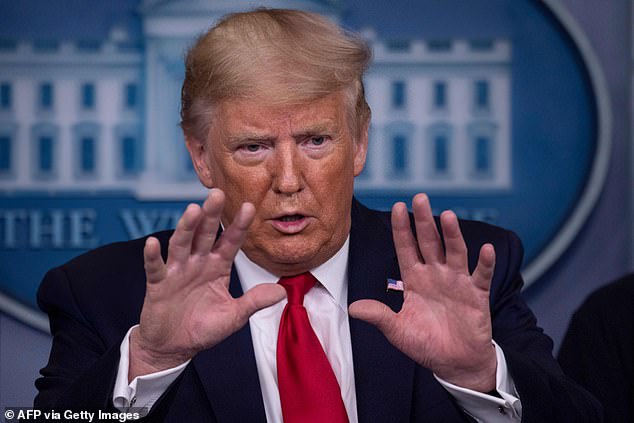 Indeed, the deputy health minister has accused the UK of impeding its efforts to fight the crisis by prohibiting the sale of a million surgical masks due to US sanctions.

Iranian authorities have blamed U.S. sanctions for hampering its efforts to curb the outbreak and Rouhani has urged Americans to call on their government to lift sanctions as Iran fights the coronavirus.

Alireza Raisi claimed last week: ‘We had bought several million masks from Britain before [the epidemic started] but the country did not deliver them to us due to the sanctions.’ 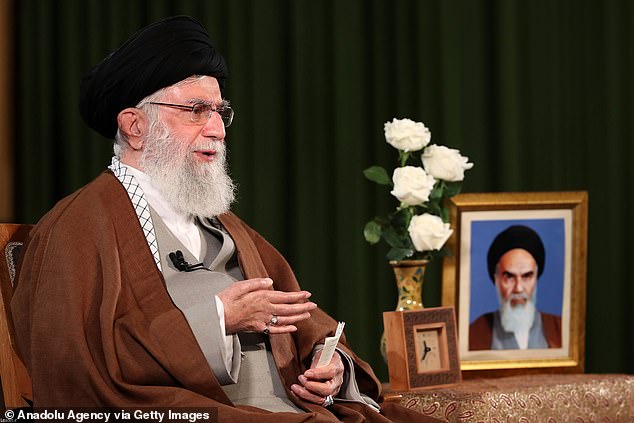 Ayatollah Ali Khamenei, has publicly declared that the United States created ‘a special version’ of the deadly coronaviruswith the intention of infecting Iranians using genetic information

But the United States has sent Iran a blunt message: the spread of the virus will not save it from U.S. sanctions that are choking off its oil revenues and isolating its economy.

‘You have blocked Iran’s oil exports, you have stopped Iran’s banking transactions… Your help offer is the biggest lie in the history,’ Rouhani said.

On Sunday Ayatollah Khamenei said: ‘The American leaders have said several times that ‘we are willing to provide you with treatment and medical assistance.’

He added: ‘First of all, you face shortages yourselves. If you have anything available, use it yourselves. Second, you, Americans, are accused of producing this virus. I do not know how true this accusation is. But as long as this accusation stands, which sane mind will trust you?’

The accusation is the latest propaganda effort against the United States, with the Chinese government already accusing the USA of manufacturing the virus.

Zhao Lijian, a spokesman for China’s Ministry of Foreign Affairs accused American officials of dishonesty over what the US government knows about the disease. 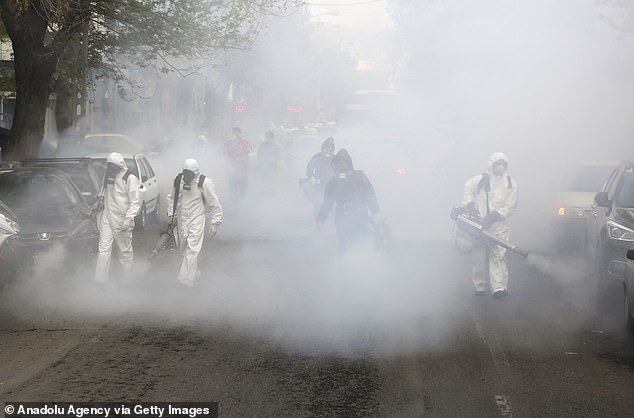 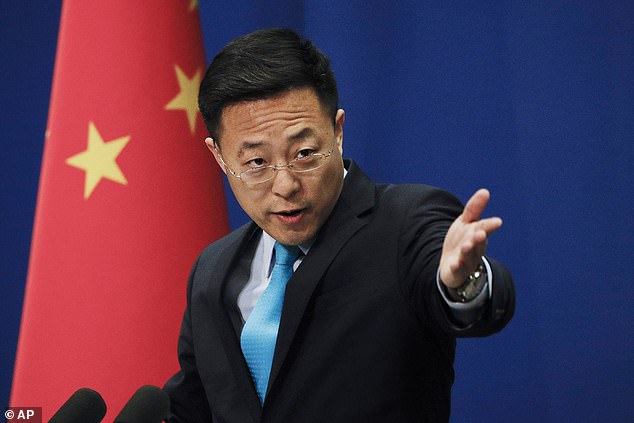 Zhao Lijian, a spokesman for China’s Ministry of Foreign Affairs conspiratorially accused American officials of covering up what the US government knows about the disease 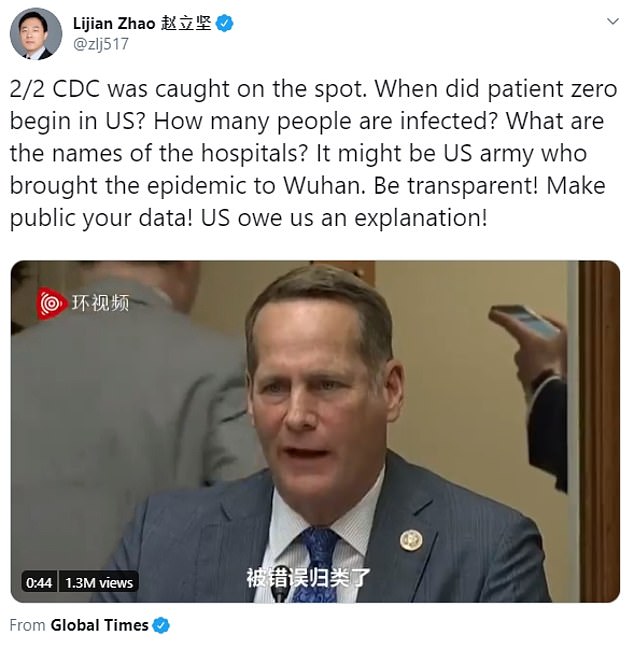 Despite Twitter being banned in China’s tightly controlled internet, Zhao Lijian’s comments were widely circulated on throughout China as part of a conspiratorial propaganda war

According to the New York Times, the unfounded conspiracy theory was recirculated on China’s tightly controlled internet on Friday after Zhao Lijian made the accusations on Twitter.

The conspiracy theories mark ever deepening tensions between the US and Iran, and the US and China.

In 2015, the US imposed greater sanctions on Iran after the Trump administration pulled out of the nuclear deal and launched a renewed economic blockade of the country.

It has since tightened its economic strangle-hold on Tehran which has refused to bow to America’s will.

Yesterday Pakistan’s Prime Minister Imran Khan waded into the row, appealing to President Trump in a tweet to lift the sanctions.

‘I want to appeal to President Trump on humanitarian grounds to lift the sanctions against Iran till the COVID-19 pandemic is over,’ Khan wrote.

‘The people of Iran are facing untold suffering as sanctions are crippling Iran’s efforts to fight COVID-19. Humanity must unite to fight this pandemic.’

Iran on Thursday granted a medical furlough to imprisoned US Navy veteran Michael White who has been in prison since his arrest in 2018. But his release is conditioned on him staying in Iran, U.S. Secretary of state Mike Pompeo said.

White was later sentenced to at least 10 years in prison on charges of insulting Khamenei and posting anti-establishment remarks on social media under a pseudonym.

It is not clear exactly how many Americans Iran may hold, but Washington has warned Tehran that it would hold the clerical rulers directly responsible for any American deaths since the outbreak has infected the Islamic Republic.

Khamenei has ruled out any talks with Washington to reach a new nuclear deal, as demanded by Trump, unless it lifts crippling sanctions that Tehran blames for hampering its efforts to contain the speedy spread of the coronavirus across the country.

But growing discontent over economic hardship, combined with the coronavirus outbreak’s economic impact, could force Iran to choose diplomacy over confrontation with the United States.

Related posts:
March 23, 2020 World News Comments Off on Iran's president calls on US to lift sanctions to aid with coronavirus
Celebrity News:
Courtney Love Apologizes After Accusing Trent Reznor of Abusing ‘Girls as Young as 12’
Who Is Carly Lawrence From Too Hot To Handle?
‘Dull as Prince William’ John Cleese aims jibe at royals as he bemoans Euro 2020 matches
Naya Rivera's father gives update on how her son Josey is coping with her death
'Bachelor' star Carly Waddell rushed to hospital, in 'rough shape,' ex Evan Bass says
Recent Posts