More than one-quarter of Melbourne's CBD shops are either closed or vacant, with new figures laying bare the economic pain brought by successive COVID lockdowns.

The alarming figures were revealed at a Melbourne City Council meeting on Tuesday night, where councillors resolved to offer free parking to visitors in an "extraordinary" attempt to lure people back to the CBD. 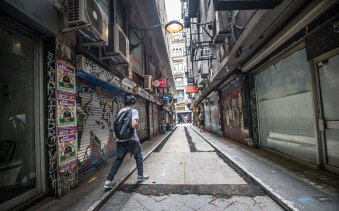 Melbourne City Council will offer shoppers free parking in an “extraordinary” attempt to lure people back to the CBD. Credit:Jason South

Job losses in inner Melbourne have eclipsed those lost in other parts of the state. Since March, 13.2 per cent of jobs have been wiped out, City of Melbourne deputy chief executive Alison Leighton said.

Of the 28 per cent of city businesses that have shut their doors, half of those are vacant. Across the CBD, an estimated 2000 businesses are either closed or empty, leaving thousands out of work.

"This is an economic crisis which has very real consequences for the people of our city," deputy lord mayor Nicholas Reece said.

Before the pandemic struck, an average 911,000 people travelled into the CBD every work day.

But the council estimates the number of workers, visitors and tourists entering the CBD will fall by 38 per cent, even after Premier Daniel Andrews' announcement on the weekend that 25 per cent of workers could return to offices from Monday.

While 10 major employers including NAB and Telstra have signed up to a City of Melbourne "CEO pledge", vowing to bring at least 70 per cent of their workforce back to the CBD, fulfilling that pledge could take months.

Council officers report that between 7.30am and 4.30pm on Monday, just over half of the council-managed on-street parking spaces within the CBD grid were occupied.

Under the plan, to take effect from Tuesday, motorists will be able to access free parking vouchers from the City of Melbourne and display them in their windscreens. Parking time limits will still apply.

The council forecasts it will lose at least $1.6 million in parking revenue between December 1 and January 3, when the scheme is due to finish.

"At this time, they are looking to us for solutions that recognise that they are experiencing devastating financial situations and every single dollar and every single initiative that can help drive revenue makes an enormous difference for them," she said.

"The fact that every day makes a difference can't be understated."

The plan was opposed by the Greens councillors and independent Jamal Hakim, who argued the free parking scheme is a departure from the council's Transport Strategy 2030, adopted last year as council policy.

That policy commits the council to disincentivising car use, and encouraging public transport, walking and cycling.

Consultants from the Institute for Sensible Transport, which helped shape that strategy, said they were disappointed at the shift to incentivising car use.

"Trying to compete with the likes of Chadstone or Fountain Gate on parking is a race they will never win, and nor should they want to," senior transport analyst Vaughn Allan said.

Cr Capp said the council's own data showed there were "significant" amounts of available car spaces each day.

"We need to be a competitive destination for people to come and do their Christmas shopping," she said. "We know that free parking is an incentive that does attract people."

Related posts:
November 25, 2020 World News Comments Off on ‘It is bad out there at the moment’: Thousands of CBD shops closed or vacant
Celebrity News:
Garrett Hedlund Arrested For Public Intoxication After Split From Emma Roberts Report
A Place In The Suns Craig Rowe speaks out on health concern amid property drama
Kim Kardashian's Touching Tribute To Late Fashion Designer Thierry Mugler
Nick Cannon Pens Sweet Tribute to Late Son Zen: Missing My Little Dude
Jennifer Coolidge got a guest spot on Thank U, Next by DMing Ariana Grande
Recent Posts