Washington: James Murdoch has resigned from the board of News Corp over disagreements with its coverage of politics and environmental issues in a move that separates him from his family's global media empire.

James, the youngest son of media mogul Rupert Murdoch, said he would step down immediately as a director at the company that owns The Wall Street Journal, The New York Post, The Herald Sun and the right-wing Fox News cable television network. 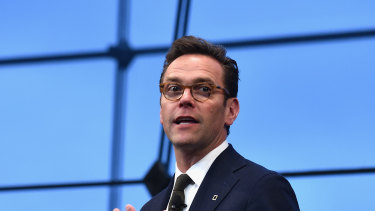 James Murdoch has resigned from the News Corporation board.Credit:Getty

Murdoch's resignation represents a final severing of ties from a business empire he once seemed destined to lead but has become increasingly estranged from over recent years.

For those familiar with the internecine, Succession-style power plays of the Murdoch family, James's resignation was not a huge surprise.

It's long been clear that James – a raging left-winger by his family's standards – was on the outer and that his older, more conservative brother Lachlan is set to take over when 89-year-old Rupert dies or retires. 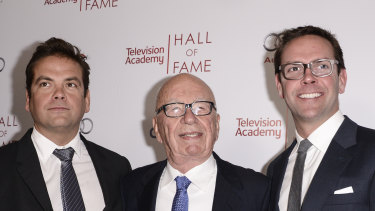 Even so, James's resignation came as a shock – more for the way the news was delivered than the fact he was stepping down. He could easily have bid farewell with some vague cliches about wanting to explore "new opportunities" and formulaic words of gratitude to his fellow board members.

Instead, his resignation letter, released on Friday night in the US (Saturday AEST), was brutally succinct. It made clear to the world that his departure was not an amicable separation, but a fundamental rejection of the company's direction.

"My resignation is due to disagreements over certain editorial content published by the Company's news outlets and certain other strategic decisions," James wrote.

He now has no official connection to News Corp, which publishes local titles such as The Australian and The Daily Telegraph as well as The Wall Street Journal and The New York Post in the US and The Sun and The Times in the UK. He already had no role in Fox Corporation, a separate family company that operates the influential American conservative news channel Fox News.

James, 47, previously served in a variety of senior roles in the empire including executive chairman of UK subsidiary News International (a period that coincided with the phone hacking scandal) as well as running Murdoch's television interests in Italy and Asia.

When Lachlan – long regarded as his father's favourite – dramatically left the empire in 2005 to pursue his own business career it seemed that James was Rupert's heir apparent. But since Lachlan's return to the fold in 2014 it has been increasingly clear that he, not James, was the next in line.

When Rupert agreed to sell his 21st Century Fox movie business to Disney in late 2017, Lachlan emerged as chief executive of the new Fox Corporation and co-chairman of News Corp. James was merely a News Corp non-executive director with no portfolio of his own.

James's fall from grace came as he and wife Kathryn grew increasingly vocal in expressing their progressive political views.

Following the deadly white supremacist protests in Charlottesville, Virginia, in 2017 James sent an open letter to company employees criticising US President Donald Trump's response. "I can’t even believe I have to write this: standing up to Nazis is essential; there are no good Nazis," he wrote. "Or Klansmen, or terrorists."

Last September he told The New Yorker: "There are views I really disagree with on Fox."

He made headlines again when he lashed out at the company's climate coverage during the summer bushfire crisis in Australia.

"Kathryn and James’ views on climate are well established and their frustration with some of the News Corp and Fox coverage of the topic is also well known,” a spokesperson for Murdoch and his wife told The Daily Beast website.

"They are particularly disappointed with the ongoing denial among the news outlets in Australia given obvious evidence to the contrary."

Earlier this month it was revealed that James and Kathryn had each donated US$615,000 to Joe Biden's campaign, making them among the Democratic nominee's biggest supporters.

Now, with just three months until the US presidential election, James is completely untethered from his family's empire – raising the possibility he will become more outspoken about his political views and his concerns about the Murdoch empire's editorial positions.

with Natassia Chrysanthos and Zoe Samios

Get our Morning & Evening Edition newsletters

The most important news, analysis and insights delivered to your inbox at the start and end of each day. Sign up to The Sydney Morning Herald’s newsletter here, to The Age’s newsletter here and Brisbane Times‘ here.

Related posts:
August 1, 2020 World News Comments Off on James Murdoch makes statement in the style of his dramatic departure
Celebrity News:
Justin Hartley’s Ex-Wife Lindsay Defends Him Amid Chrishell Allegations
New Edition: Where is Johnny Gill Now?
The surprising meaning of Kamala Harris’ name
Chrishell Stause Likes Tweets Hinting That Justin Hartley Cheated
Kelly Ripa's Most Recent Instagram Clap Back Is Epic
Recent Posts
This website uses cookies to improve your user experience and to provide you with advertisements that are relevant to your interests. By continuing to browse the site you are agreeing to our use of cookies.Ok