So much for F. Scott Fitzgerald’s famous claim that there are no second acts in American life. Just look at Joe Biden. His political success this week represents one of the most epic political comebacks in the annals of American history.

A week ago, the 77-year-old former vice-president was widely written off as the Democratic candidate to face Donald Trump in November’s election. Media pundits were once again proverbially hammering nails into his political coffin. (I say “once again” because he spectacularly lost presidential bids in 1988 and 2008.) 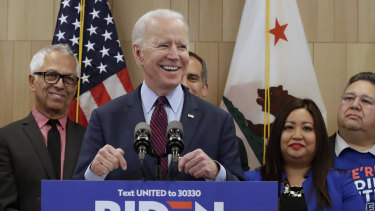 Since last month’s debacles in Iowa and New Hampshire, where he finished fourth and fifth respectively, he looked doomed. (This writer called him “damaged goods”.) At the same time, the 78-year-old socialist outsider Bernie Sanders looked unbeatable.

But the experts were wrong. Following his South Carolina rout last weekend, Biden swept 10 out of the 14 Super Tuesday states. On February 22, the betting markets rated his chances of winning Virginia and Texas at 13 per cent, Oklahoma at 7 per cent and Minnesota at 1 per cent. A fortnight later, he won all states convincingly. Lazarus-like, Biden is back from the dead.

What accounts for such a remarkable comeback?

For one thing, there is a growing anxiety among Democrats that Sanders would be a liability against Trump in November’s election. His polarising socialism and vision of a “political revolution” unnerve many Americans, especially most of the Cold War-era voters over 45 years of age.

Unlike Hillary Clinton, Biden does not have high disapproval ratings: he’s genuinely liked. Add to this Biden’s broad coalition – African Americans, Baby Boomers, suburban women and moderates – and the very real prospect that Biden could attract college-educated Republican voters, especially women, from relatively affluent suburban electorates (America’s version of Warringah or Wentworth) who are turned off by Trump’s polarising politics.

So, is Biden now the nominee? Not yet. Plenty of chances for twists and turns remain, and there is a real chance of a long drawn-out contest in the next four months before the party’s national convention.

Sanders won’t give up easily: he has created a nationwide, well-financed grassroots organisation with plenty of passion. With his progressive rival Elizabeth Warren’s withdrawal from the race, the Vermont senator is likely to attract more support.

In recent years, the Democrats have lurched to the left. From taxes, spending and regulation to trade, identity politics and energy policy, the party of FDR, JFK and Bill Clinton is now more interventionist and progressive. There is also a hankering for an outsider to take on Trump while Biden, who was elected to the Senate when Richard Nixon was president, is a quintessential Washington insider.

There are also Biden’s glaring flaws: he does not have a firm grasp of facts, details and language. He has recently declared “we choose truth over facts” and claimed that “150 million” – nearly half of the country – had died from gun violence since 2007.

If voters did not support his bid for the Senate (he’s running for president), he told a breakfast event last week, they should “vote for the other Biden” (there is only one Biden running for office!) He also embellishes stories. In 2008, he claimed to have rid Lebanon of Hezbollah.

Notwithstanding his many gaffes and stumbles, which the anti-Trump media is quite capable of ignoring anyway, Biden has lived up to the adage that old politicians never die, nor do they fade away.

History is littered with older politicians resurrecting themselves from many previous defeats and coming into power as the right person at the right time. Think of Winston Churchill in 1940, Robert Menzies in 1949, Charles De Gaulle in 1958, Richard Nixon in 1968, Yitzhak Rabin in 1992, John Howard in 1996 and Aung San Suu Kyi in 2015.

If Biden defeats first Sanders, then Trump in November’s election, he will join some prominent company. History will also judge this week as marking the turning point in his great political comeback.

Tom Switzer is executive director of the Centre for Independent Studies and a presenter at the ABC’s Radio National.

Related posts:
March 6, 2020 World News Comments Off on Joe Biden is back from the dead, but there are twists and turns ahead
Celebrity News:
Novak Djokovic is extremely disappointed to be deported from Australia
Lucy Mecklenburgh flaunts baby bump in swimsuit as she kisses fiancé Ryan Thomas
50 Cent’s GF Cuban Link ‘Sick of’ Trolls Accusing Her of Having Plastic Surgery
Bob Saget Revealed COVID-19 Battle Days Before Death: 'It Does Not Feel Good'
Katherine Ryan takes mick out of Molly-Mae Hague backlash amid '24-hour' comment
Recent Posts