PROTESTERS disrupted Joe Biden’s rally in Michigan last night and interrupted his speech — twice — on the night before the state heads to the polls.

Biden tried addressing his supporters in a Detroit gymnasium, alongside his new endorsers Sens. Cory Booker and Kamala Harris. 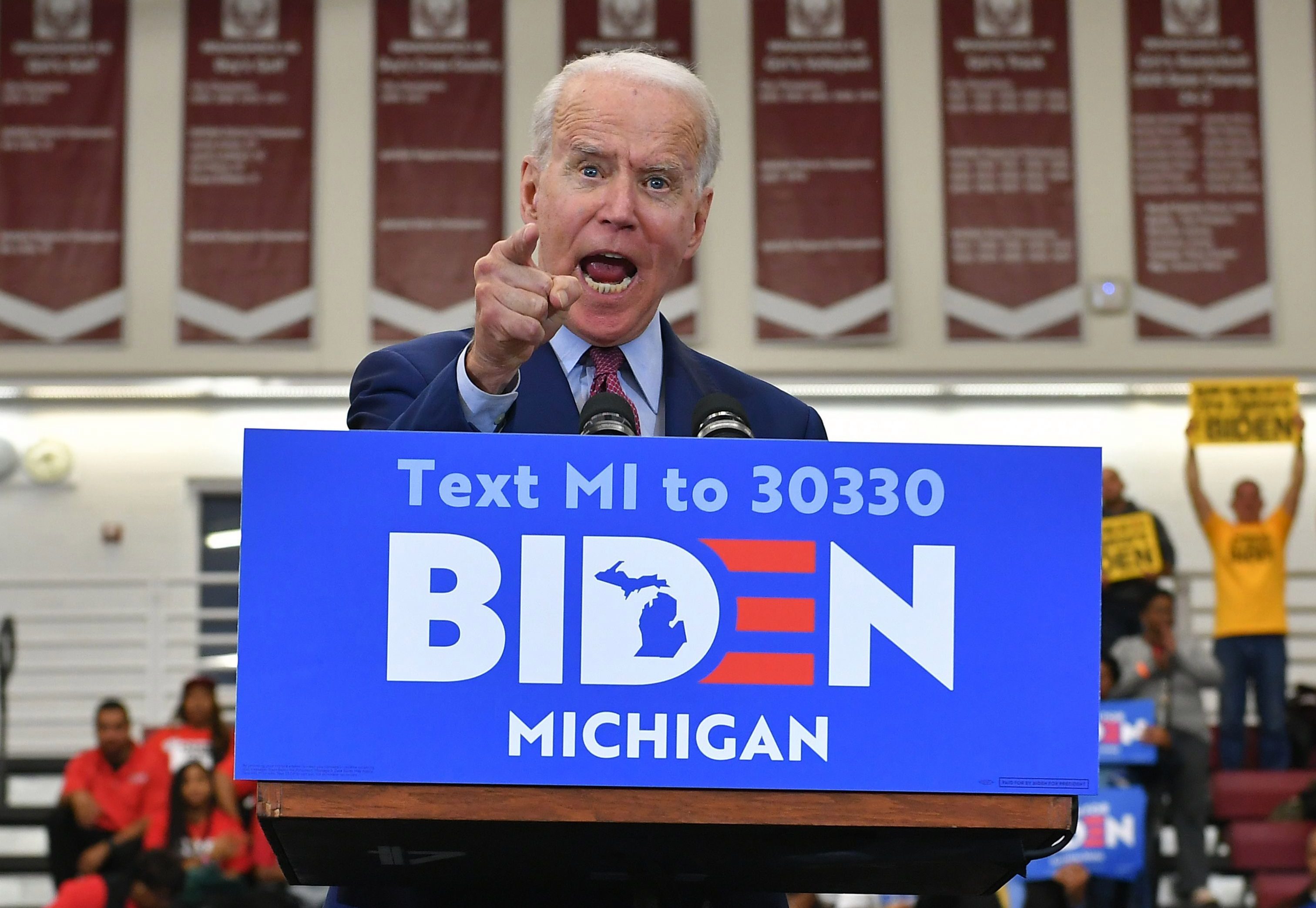 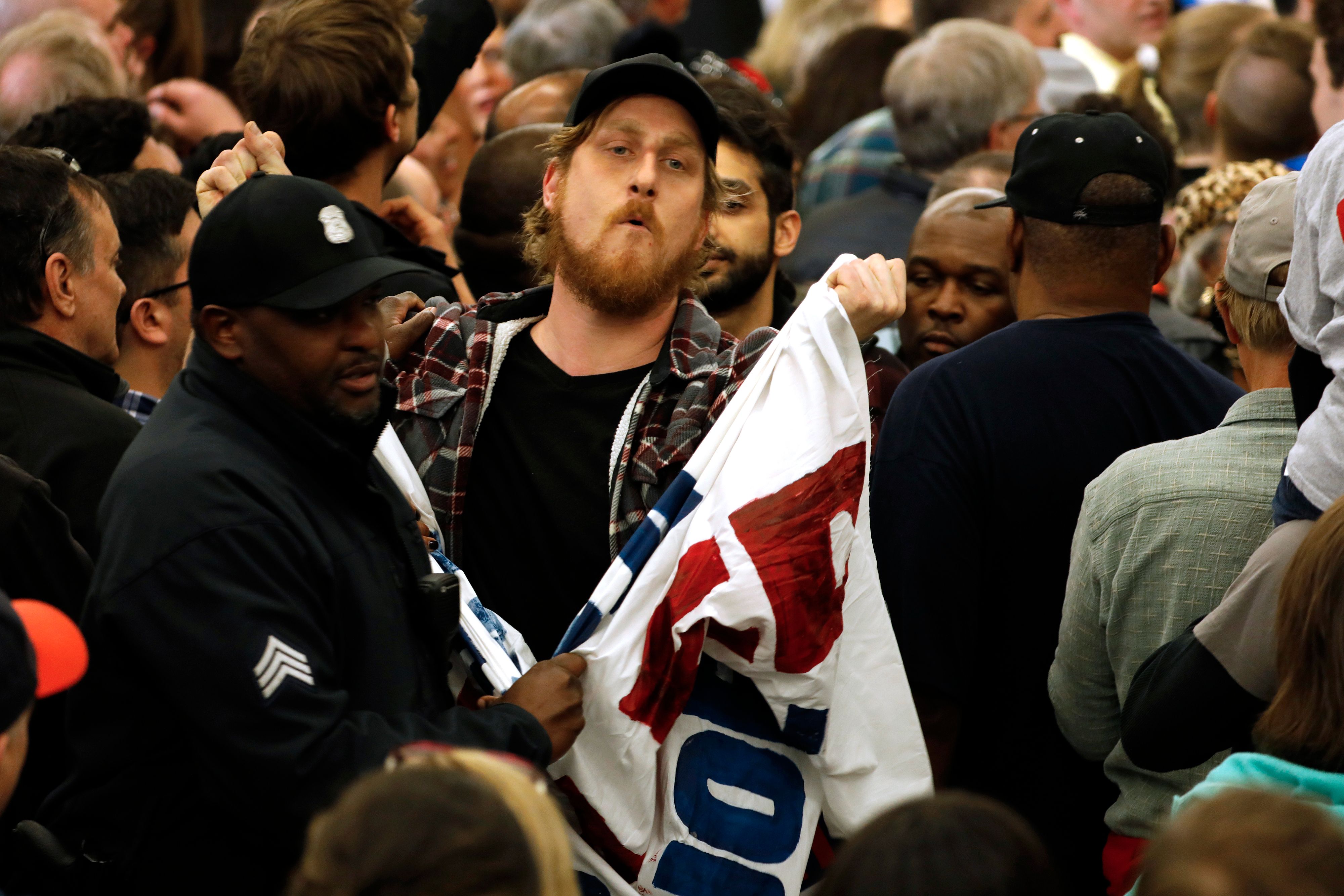 One group of protesters railed against Biden’s support for the North American Free Trade Agreement (NAFTA) after he got on stage and held up a banner that read: “NAFTA killed our jobs.”

Biden looked into the crowd and asked “Are you a Donald Trump …?” before one of his supporters tried knocking out the banner.

"This is not a Trump rally. Let him go, let him go. The Bernie Bros are here. Let him go.”

Moments later, demonstrators upset about Biden’s unwillingness to embrace environmental proposals in the Green New Deal began to shout over him and wave signs.

As Biden’s campaign staff tried to move the group out, his senior aide Symone Sanders was hit on the head with an iPad and knocked to the ground.

She wasn’t hurt. But it comes less than a week after she was tackled by a protester who rushed the stage (and apparently broke her nail) as Biden and his wife Jill were on stage in California.

After the incident, Biden questioned whether it was time to look into getting protection from the U.S. Secret Service.

“Well, I think that’s something that has to be considered, the more outrageous some of this becomes,” Biden told NBC News last week.

Following the interruptions in Detroit on Monday night, he appeared on stage with Booker, Harris and Michigan Gov. Gretchen Whitmer. 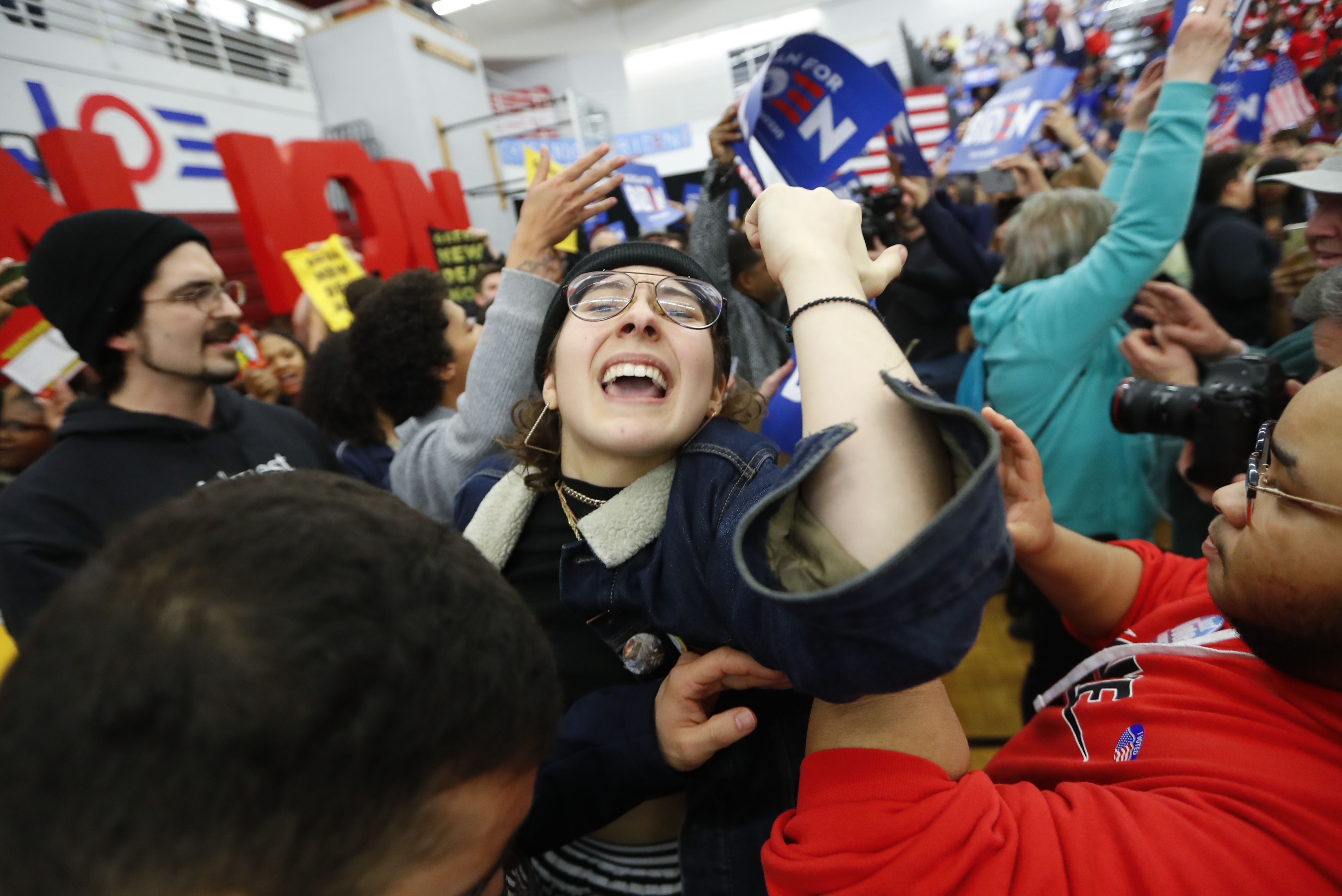 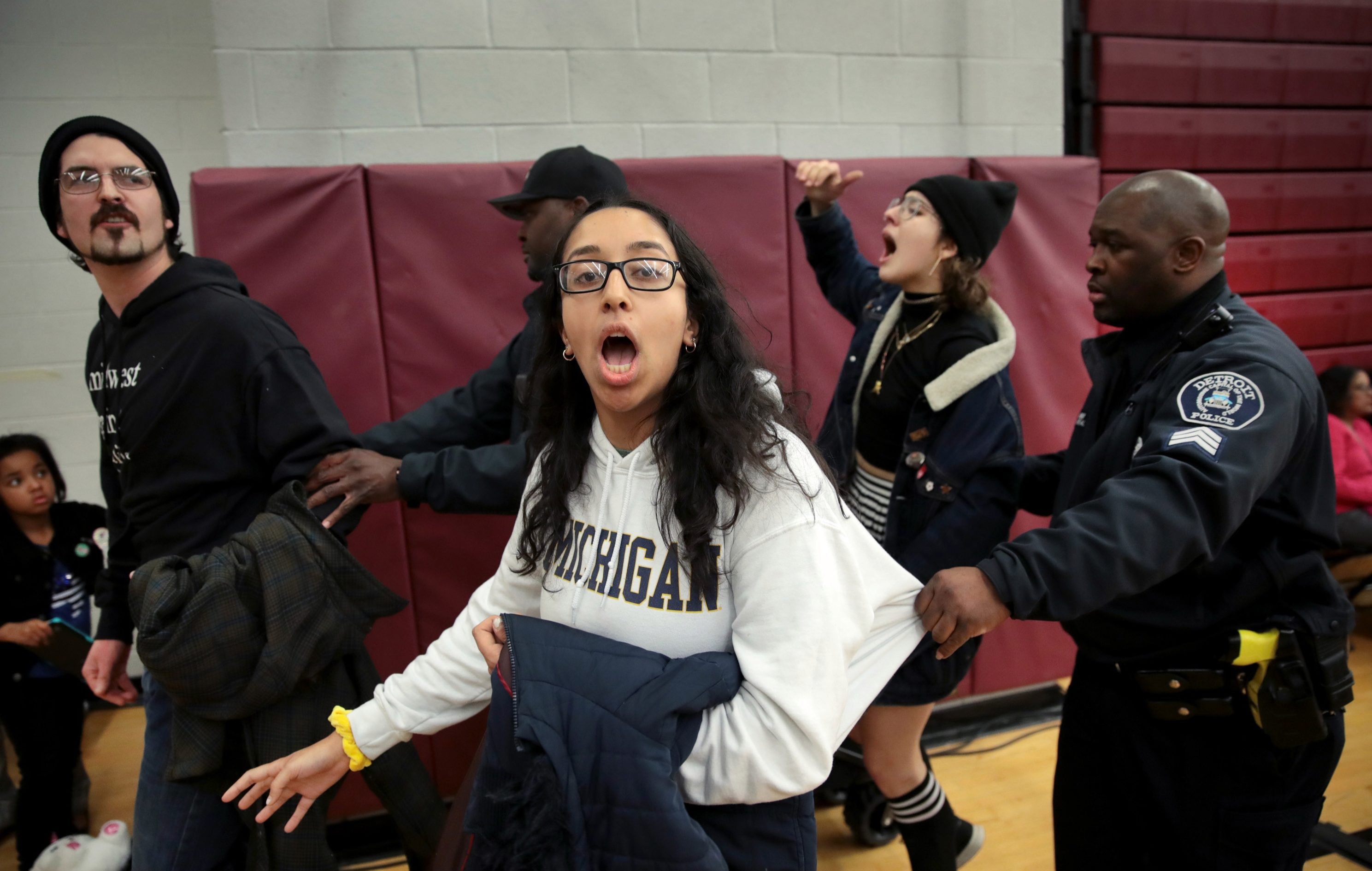 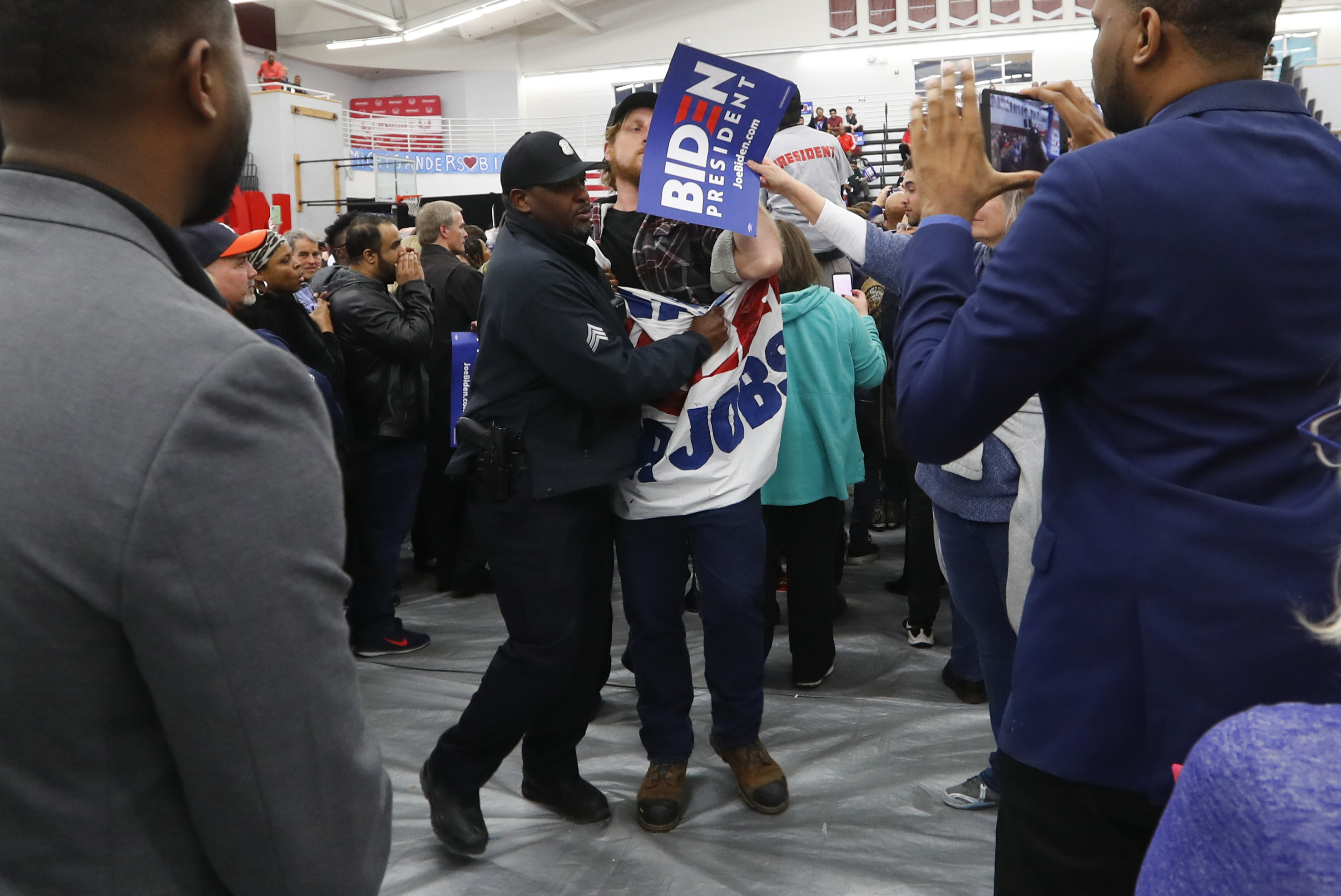 He gestured toward the two senators when speaking about “restoring the soul of the nation.”

“I view myself as a bridge, not as anything else.” Biden said, after linking hands with the trio.

“There’s an entire generation of leaders you saw stand behind me. They are the future of this country.”

At an earlier appearance Monday in Flint, Biden listed the names of the six former presidential rivals who have endorsed him over the course of the past week.

“They’ve all come out and endorsed at one time … the candidate that they think can win."

Voters in Michigan, Idaho, Mississippi, Missouri, North Dakota and Washington will head to the polls today.

In 2016, Sen. Bernie Sanders won the Democratic primary vote in Michigan — but Trump beat nominee Hillary Clinton by a narrow margin of 10,704 votes.