Washington: Former US vice-president Joe Biden has kept alive his hopes of winning the Democratic Party's presidential nomination by scoring a resounding victory in the South Carolina primary.

The major US television networks declared Biden the winner just moments after polls closed in South Carolina on Saturday (Sunday AEDT), foreshadowing an easy win for the 77-year old. 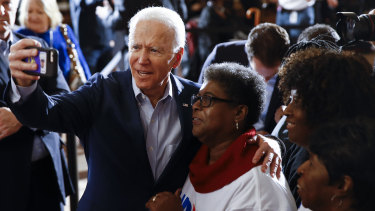 Joe Biden has been declared the winner in the South Carolina Democratic primary. Credit:AP

South Carolina is the first Democratic primary or caucus state in which African American voters make up a sizeable share of voters, and Biden won thanks to overwhelming support from black voters.

Barack Obama's deputy finished in a disastrous fourth and fifth place in Iowa and New Hampshire, leading many to doubt whether he could go the distance in the race to take on US President Donald Trump in November.

Entrance polls showed Biden winning 60 per cent of the black vote, well ahead of Vermont senator Bernie Sanders on 17 per cent and billionaire businessman Tom Steyer on 14 per cent.

Just three days out from the crucial Super Tuesday contests – where a third of total nominating delegates will be awarded – Biden still faces significant hurdles in his bid to become the party's nominee. 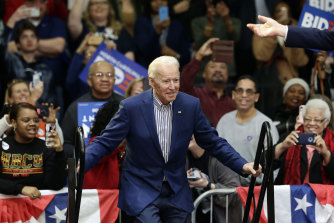 His campaign is cash-poor and is being vastly out-spent on the airwaves by New York businessman Michael Bloomberg and Sanders.

Bloomberg announced on Saturday that he had taken out a major advertising buy to deliver a three-minute national address on the coronavirus.

Polls show Sanders ahead in the large and politically-powerful states of California and Texas, which hold their primaries on Tuesday, thanks to a coalition of young, progressive and Hispanic voters.

The moderate vote is also likely to be split between Biden and several other candidates unless any of his rivals drop out before Super Tuesday.

Democratic Party elites are likely to increasingly rally around Biden as the only viable alternative to Sanders, a self-declared democratic socialist they believe will drag down the Democratic vote in November.