Losing his cool! Kids ice hockey coach is sacked after he attacks the referee and ‘spits in his face’ during match

Fights between players are not uncommon in ice hockey, but footage of one particular punch-up on a rink in the US has gone viral – after a children’s team coach was caught attacking the referee during a match.

The shocking video, viewed more than 400,000 times, was captured at the Bog Ice Arena in Kingston, Massachusetts on Saturday, where Manchester Junior Monarchs took on the Springfield Junior Pics.

The 80-second clip shows what should be a friendly contest descend into farce as yelling and banging can be heard from the side of the arena.

The official skates over to the bench to try and restore order and is seen pointing and ejecting the Monarchs coach – named in local reports as Brian Pouliot – from the game.

The players, aged just 11 and 12, then watch on as the coach walks onto the ice and confronts the referee.

It is then alleged he spits in the official’s face, who pushes him over, causing him to fall onto the ice. 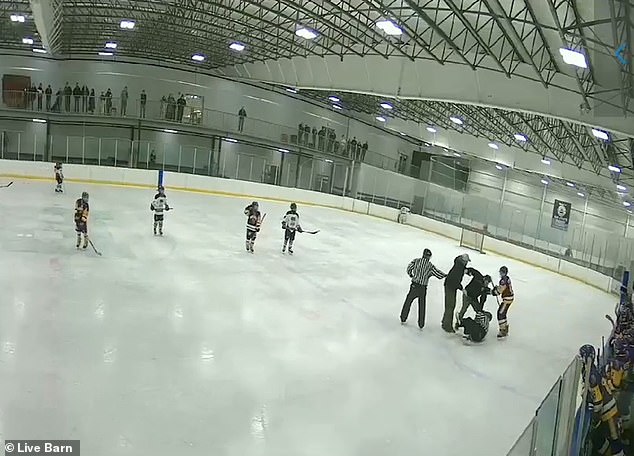 The coach throws a series of punches towards the official, who falls to the ground. The attacker then has to be held back by assistants and escorted off the ice

The coach gets back to his feet and retaliates by throwing a series of punches, causing the ref to fall to the ground himself.

The attacker then has to be held back by assistants and escorted off the ice, but not before the two involved in the fight gesticulate towards each other once again.

A spokesman for the New Hampshire Junior Monarchs said the club was ‘disturbed and disappointed’ by the weekend’s events and confirmed the coach in question had been sacked. 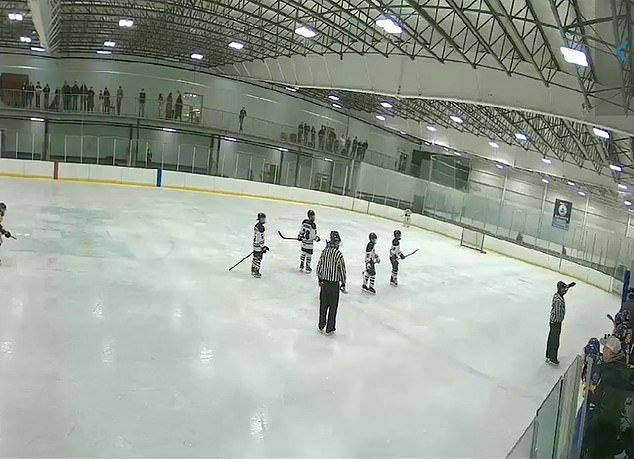 After banging and yelling can be heard from the sidelines, the referee skates over to the bench to try and restore order and is seen pointing and ejecting the Monarchs coach – named in local reports as Brian Pouliot – from the game

‘The Monarchs organization condemns this behavior by any employee or member of our coaching staff,’ a statement read.

‘The coach involved was immediately terminated and relieved of his duties. This coach no longer has any ties within our organization.

‘His actions and behavior go against all of our core values and principles. 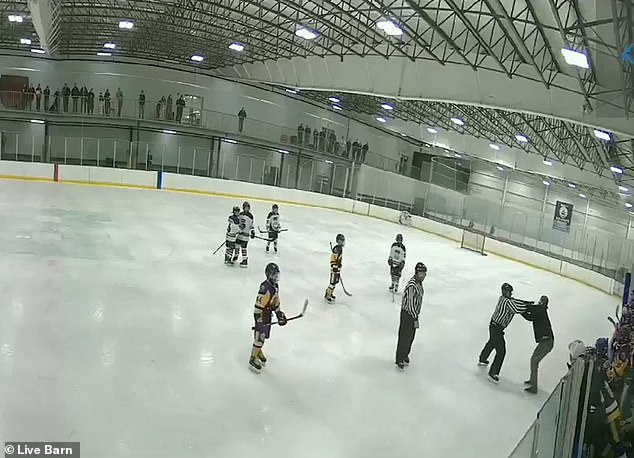 The coach doesn’t take kindly to this order, however, and walks onto the ice, allegedly spitting at the official who pushes him over

‘The Jr. Monarchs will continue to support New Hampshire Amateur Hockey and USA Hockey in this matter.

‘One person’s actions should not be a reflection of the organization as a whole. We are truly sorry that this incident took place.’