Kourtney Kardashian and Travis Barker are married — and this time it's legal! The couple legally wed at a courthouse in Santa Barbara, California, on Sunday a source tells ET.

"Kourtney and Travis are now legally married, but plan to have a big wedding at another time," the source says. "This was a smaller, low key event to make their wedding official. There was some family at this event and they took photos to have.”

An eyewitness tells ET that the couple had a photoshoot outside the courthouse in Santa Barbara with family present.

"Travis wore a black tuxedo and Kourtney was in a white dress. Kourtney's grandma MJ was there and so was Travis' dad," the eyewitness says. "They posed in a black convertible that had a 'just married' sign and cans rattling from it in the back. They then exited the car and walked towards the courthouse privately. It seemed very low key and not many people were around. They had their own set of cameras and crew with them." 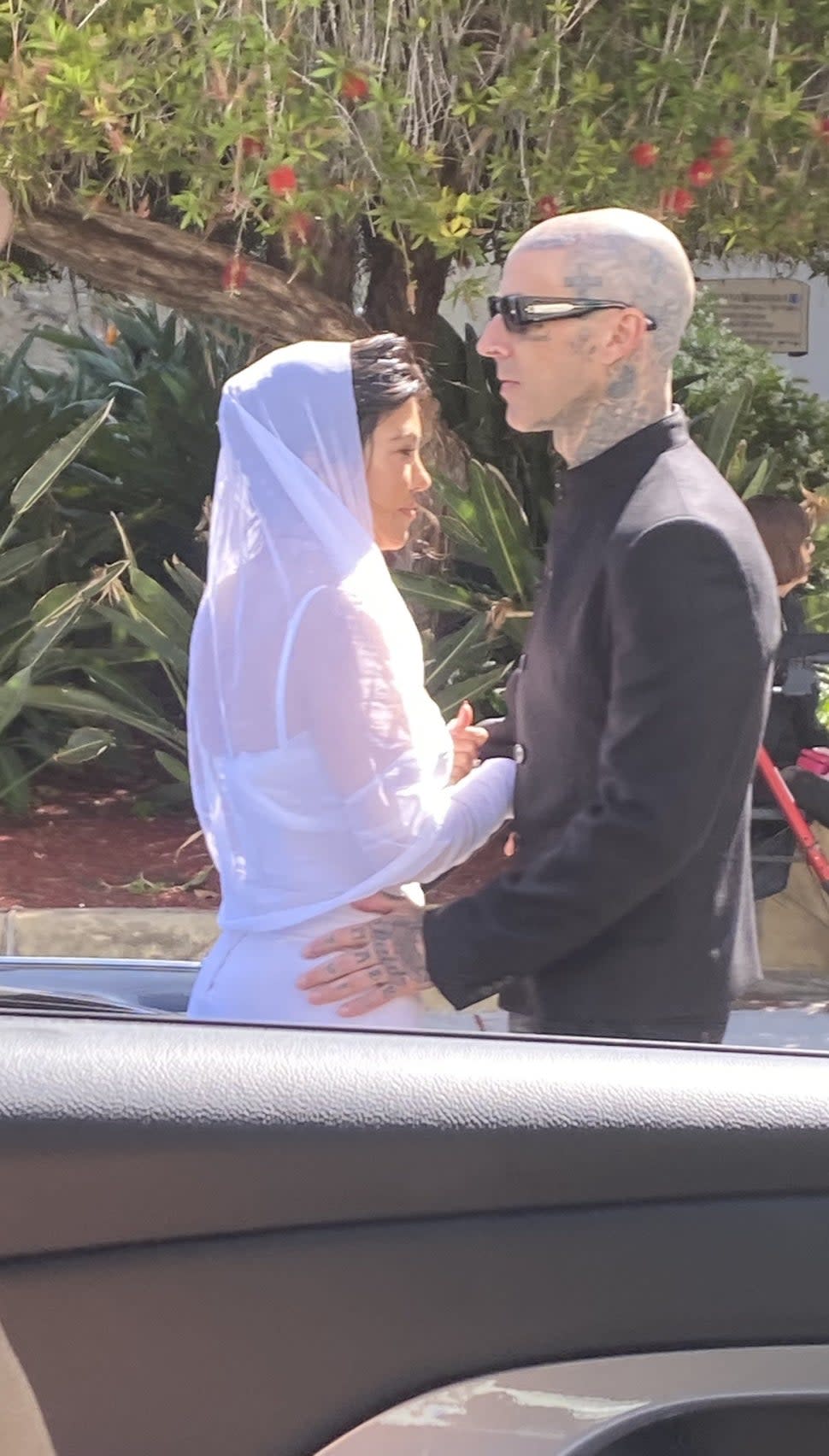 Another eyewitness tells ET, "Kourtney and Travis were taking pictures outside of the Superior Court of California in Santa Barbara this afternoon for over an hour on the Santa Barbara street of the court house. They posed in the car and walked along the sidewalk, on the steps of the courthouse and by the car. They seemed very in love and looked cute together. They were kissing in most of the photos, especially in the car."

But the couple isn't done celebrating their nuptials. A second source tells ET, "Kourtney and Travis are planning to have an actual wedding celebration in Italy very soon."

The official marriage came after the couple's April wedding ceremony in Las Vegas that wasn't legal. Marty Frierson, owner of the One Love Wedding Chapel, previously told ET that Kourtney and Travis danced and kissed while they exchanged vows, during a ceremony that lasted 10 to 15 minutes.

Frierson added that Kourtney and Travis did not exchange rings and celebrated by tossing a bouquet of fresh roses.

Days after the ceremony, both Kourtney and Travis shared pics of their Vegas adventure on Instagram.

"Once upon a time in a land far, far away (Las Vegas) at 2am, after an epic night and a little tequila, a queen and her handsome king ventured out to the only open chapel with an Elvis and got married (with no license)," Kourtney wrote alongside PDA pics. "Practice makes perfect."

Meanwhile, a source told ET that the impromptu ceremony "was a fun, somewhat spontaneous thing ahead of their actual wedding this spring."

"Travis thought it would be a lot of fun and cute to commemorate their relationship this way," the source said. "Kourtney is so in love with Travis and is down to do anything he's into."

While their first ceremony may not have been legally binding, the source said that the couple is "very excited to keep celebrating together and to honor their love with their friends and family."

"Travis loves to flaunt their love and can't wait to spend the rest of his life with Kourtney," the source said. "Kourtney is so happy and feels like it's a whole different world from when she was with Scott [Disick]."

Kourtney and Travis got engaged in October, 10 months after the longtime friends and neighbors started dating. In March, a source told ET that the couple planned to have an "intimate" wedding ceremony.

Additionally, the source said that the pair is looking to expand their family. Kourtney is already mom to Mason, 12, Penelope, 9, and Reign, 7, while Travis is dad to Landon, 18, and Alabama, 16.

Kourtney Kardashian's Daughter Cried After Learning of Her Engagement