The RSPCA will not bring charges against prominent anti-Brexit lawyer Jolyon Maugham after he battered a fox to death with a baseball bat on Boxing Day.

The charity said although they do not condone the killing of healthy foxes, there was no realistic prospect of conviction in the case.

Mr Maugham, founder of the Good Law Project, tweeted on December 26 last year: ‘Already this morning I have killed a fox with a baseball bat. How’s your Boxing Day going?’

He claimed the fox had got caught up in the protective netting around the chicken coop at his London home and he ‘wasn’t sure what else to do’. He was later referred to the RSPCA and apologised. 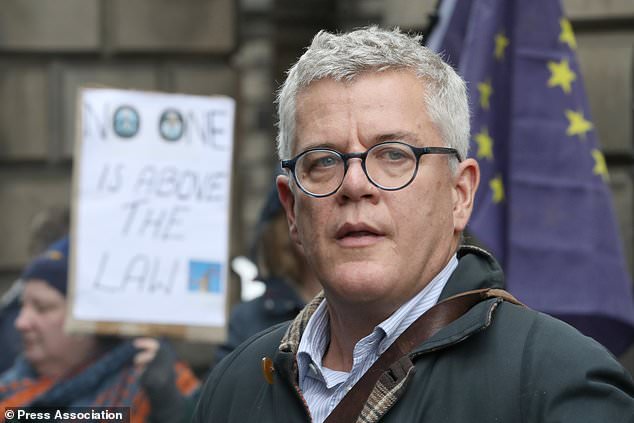 In a statement issued today, the RSPCA said: ‘An independent post mortem and forensic veterinary assessment of the fox’s body was carried out and findings indicate the fox was killed swiftly.

‘Therefore, in this case, the prosecutions department determined that the evidential threshold needed to take a prosecution under the CPS code was not met under any legislation relating to animals or wildlife.’

What the law says about killing foxes

Foxes do not have protected status in the UK, so it is not an outright offence to kill them.

However, it is illegal to cause an animal ‘unnecessary suffering’ under the terms of the Animal Welfare Act. It also means some methods of killing, including poisoning, stabbing and – according to fox control group Fox-a-gon – clubbing, are illegal.

Those found guilty under the legislation can be jailed and fined up to £20,000. Government guidelines say that foxes can be lured into cage traps and snares and these should be checked at least once a day to prevent suffering.

Captured foxes must then be ‘humanely killed’. It is legal to shoot foxes, but anyone using a weapon must have a licence. Hunting foxes with dogs was outlawed by the Labour government in 2004.

It is not illegal to kill a fox, but Government guidelines state that if a fox is caught in a trap or snare on a person’s property, they must be ‘humanely’ killed.

He said: ‘I note what the RSPCA says about killing a fox. Their advice differs from the Government’s advice to householders which says one ‘must’ — in other words, you have no choice but to — humanely kill any fox caught on your property and that you ‘shouldn’t release captured foxes’.

‘I know that some were genuinely upset by my actions on Boxing Day and the tone of my tweets. I am profoundly sorry for that upset.

‘It was my intention to convey in a gently self-deprecating manner the incongruity of my Boxing Day morning. I got that wrong.

‘As to my actions, in the situation in which I found myself — needing to act in great haste to save the chickens my family keeps — I did not have the luxury of time to reflect on the competing ethical approaches of the RSPCA and Natural England.

‘Of course, I respect the different assessments others might, equally reasonably, have made.’