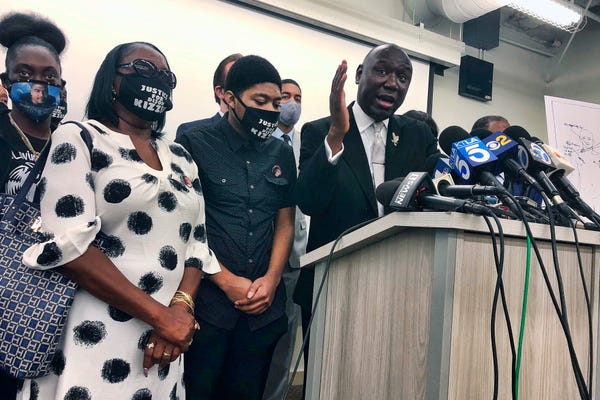 The new autopsy found that 15 of those bullets hit him, and seven of those shots hit Kizzee from behind, the attorneys said.

Kizzee, 29, was riding a bike last month around a Los Angeles neighborhood when two deputies passing through in a car tried to stop him, saying he committed a bicycle code violation.

Kizzee hopped off his bike and ran away when the deputies approached, according to a sheriff department spokesperson. The deputies followed and began shooting at Kizzee upon noticing that he was reaching for a semi-automatic handgun, the department said.

Civil rights attorney Ben Crump, who is representing Kizzee's family, said that video of the interaction between Kizzee and the officers contradicts the department's findings.

Earlier in September, Crump shared a grainy video on Twitter that appears to show the deputies chasing Kizzee, who seems to be walking away right before receiving multiple rounds of fire to the back.

In a tweet Tuesday, Crump said that the 15 bullets uncovered by the autopsy report represent "excessive force."

"Nineteen times of firing into a man's body says to me that there's been poor training," he said.

The autopsy found that the fatal shot went through Kizzee's lung, the attorneys said.

"He did not die instantly, he was writhing on the ground in pain when officers opened up on him," Douglas added.

After police killed Kizzee, demonstrators gathered for days outside the South Los Angeles sheriff's station to protest police brutality, according to the Los Angeles Times.

The protests were a continuation of the ongoing demonstrations against police abuse and violence targeted at Black people, which have swelled around the country since the police killing of George Floyd in May.

"It's happening so fast we can barely keep up with the hashtags," Crump said Tuesday during the news conference, referring to multiple incidents of police shooting Black people.

Crump is also representing several other Black families whose loved ones were shot and in some cases killed by police this year, including Jacob Blake, Breonna Taylor, Ahmaud Arbery, and George Floyd.

Related posts:
September 23, 2020 World News Comments Off on Los Angeles police shot Dijon Kizzee 15 times, 7 times in the back, according to a new independent autopsy
Celebrity News:
New York Dolls Guitarist Sylvain Sylvain Dead At 69
Jordyn Woods Seeks Prayers for BF Karl-Anthony Towns Amid COVID Diagnosis
Khloé Kardashian Needs to Break Up With FaceTune — Especially When She Isn't Using It On Her Face
The Real Reason Trump Met With MyPillow Guy Mike Lindell Again
Bow Wow Performs at Packed Concert Amid Coronavirus Pandemic: Twitter Reacts
Recent Posts
This website uses cookies to improve your user experience and to provide you with advertisements that are relevant to your interests. By continuing to browse the site you are agreeing to our use of cookies.Ok