Premier Gladys Berejiklian warned that Melbourne’s local COVID-19 cases were a wake-up call that the virus can still spread in the community and a reminder of why people need to come forward to be vaccinated.

NSW residents were encouraged to reconsider travel to Melbourne after the city’s coronavirus cluster grew to 15 cases on Wednesday. 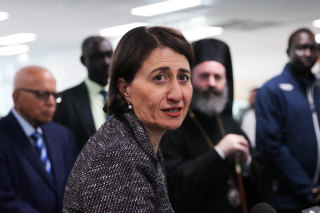 “That could happen in any state in Australia,” she said of Melbourne’s local cases, adding that the country was still in “very initial stages” of its vaccine rollout.

Health Minister Brad Hazzard said he appreciated some people would need to travel interstate for essential business but it “might be wise and it might be precautionary” for people in NSW to not travel to Victoria and particularly Greater Melbourne for the time being.

“If you don’t really need to go to Greater Melbourne it might be an idea just to leave it for a few days until we get some clarity from the Victorian government as to what’s going on,” he said.

Two people were identified as close contacts of Victorian cases after returning to Sydney, but both had already tested negative, Chief Health Officer Kerry Chant said.

Other NSW residents had also contacted the ministry after learning they had been at a major Melbourne shopping centre during times previously listed as exposure sites. Dr Chant said the health advice for that site had been revised such that they were no longer considered contacts.

“While the vaccine is our way out [of the pandemic], we know that there’s certain behaviours that we needed to embed on that journey, and one of those is if you have the most minimal symptoms, please get tested,” Dr Chant said.

After Victorian acting Premier James Merlino said his government was considering expanding vaccine eligibility, Ms Berejiklian said her state’s focus was “getting jabs in arms” for those already allowed to book in.

How to get your shot

NSW Health has already moved ahead of the national rollout by allowing people in their 40s to register interest in receiving leftover Pfizer shots at its Sydney Olympic Park clinic.

Mr Hazzard and Ms Berejiklian reminded people in their 40s they were only eligible to register their interest in receiving their vaccine on the NSW government website, after at least two URLs circulated on social media, allowing people to book a shot directly.

One of the URLs was originally meant for families of NSW Health staff and the other is understood to be a link sent to people who had already registered.

A NSW Health spokesperson confirmed people who had registered their interest in receiving a vaccine were being progressively being contacted regarding available appointments and then sent a link “for personal use”.

The Premier said identity checks were taking place at the clinic.

“If there are a small number of people not doing the right thing, they’ll be found out,” she said.

All of the cases are either work colleagues or other close contacts of existing cases. However, their infections have spread potential exposure sites across the city, with some travelling as far afield as Bendigo while likely infectious.

Anyone entering NSW from Greater Melbourne is required to complete an online declaration form confirming they have not visited a venue of concern.

NSW Health has also asked people who have been in the Greater Melbourne or Bendigo areas since May 12, excluding people who only transited through an airport, to not visit residential aged care facilities or healthcare facilities during this time unless seeking treatment or for compassionate reasons.

Stay across the news you need to know related to the pandemic. Get it every Monday.