London: All world leaders have a fallback option for when they’re desperately in want of votes. Joe Biden puts on aviator sunglasses and makes sure he’s seen at an ice cream parlour. Donald Trump reaches for his red hat, arranges for 5,000 acolytes to meet him at the nearest airport runway. Boris Johnson drives a digger through a wall, or something, then hopes people misread that metaphor and see it as charming. 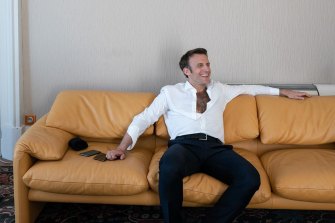 Emmanuel Macron, bless him, is no different. Leading Marine Le Pen by just five percentage points in the French presidential election, he needed to turn heads this Easter weekend, and rapidement. “Mes amis, what can I do to really get the people going?” he must have asked his staff on Saturday.

A month ago, Macron spent an afternoon wearing a hoodie, a furrowed expression and three-day stubble for a photoshoot that made it look as if he was playing Volodymyr Zelensky. It went down poorly, but not poorly enough to put Team Macron off overtly masculine, uncomfortably informal portraits involving excesses of body hair and that familiar political scent, Eau D’esperation.

Because he’s at it again, and this time he’s saying it with his chest. In a new photo set from Soazig de La Moissonnière, a frequent Élysée snapper, Macron can be seen reclining, presumably post-rally (post-something, anyway), on a mustard leather sofa, with several mobile phones at his side and at least four more shirt buttons undone than is ever acceptable, unless actively undressing.

And poking – no, powering – through the chemise is his rarely seen running mate: a bristling carpet of thick brown hair. The war chest. A Tom Selleck throwback special. And boy, did it get the people going. Some politicians call for a spin doctor, Macron called for the rug doctor. Diagnosis? A heavy dose of “he-vage”.

Whether this will win over the undecided voter in France is unclear, as is the manner in which Le Pen might respond. (A little midriff on show at her next press conference, perhaps?) But in revealing that he could save hundreds of Euros on the government security budget by always wearing his own thatched bullet-proof vest, Macron has accidentally tapped into the zeitgeist.

After more than three decades under wraps for everybody other than Roger Federer, he-vage – male cleavage – is very much back. At awards ceremonies, triangles of nude torsos, from Timothée Chalamet’s to Jared Leto’s, have littered red carpets through the spring. On the catwalks, you’ve been more likely to see real fur than a round neck or top button done up this season. And as with any trend, it was always going to be ruined by politicians. 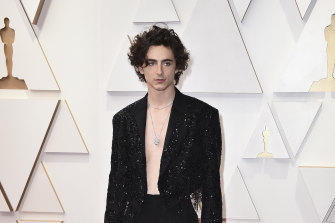 “Man Cleavage Is Back – And It’s a Blessing,” Vogue sermonised five years ago, when Harry Styles gave up fastening the majority of his shirt buttons, but it never seemed to quite catch on until more recently. Some have blamed the pandemic and working from home for the shift to a more casual look, but that’s mainly because people blame the pandemic and working from home for absolutely everything.

In reality it’s just proof that the carousel of style and fashion revolves for men just as it does for women, only more slowly. In years gone by we saw the hirsute he-vages of Tom Jones, Burt Reynolds, David Hasselhoff and their kin as evidence they were so masculine as to be part bear. They wore on their chests carpets of virility and added medallions to draw the eye towards it. 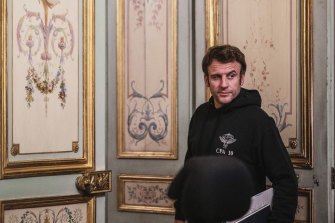 By the late 1980s and 90s, though, the look had become a joke, seen not as classy and primal but tacky and porn-y. As Austin Powers killed the vibe for good, the sex symbols of the new era, from Leonardo DiCaprio and Tom Cruise to David Beckham and Peter Andre, were waxed smooth and valorised above their hairy peers, like naked mole rats made rodent kings. 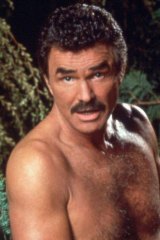 American actor Burt Reynolds was the exemplar of he-vage in the 1970s and 1980s. Credit:AP

The rug was not dead, though. No, the rug merely lay dormant, waiting for its moment to grow back into public consciousness. Now that’s happening at the same time as the he-vage revolution, and there is no telling how far men will be willing to go. Hopefully just to the waist.

As his Zelensky cosplay day proved, Macron is not shy of borrowing from the masculinity brands of other popular leaders in order to boost his own image, and so it is with his unbuttoning. Early last year, the Greek prime minister Kyriakos Mitsotakis stole a morning of the internet’s attention when images were posted showing the Cretan receiving his Covid vaccine.

There he was, lilac shirt slashed open to the naval, drawing the curtain back on a leather thong necklace and fuzzy, tanned barrel chest. Comments ranged from “It’s a strong look!” to “HELLA-SEXY! I’m flying to Greece immediately!” – making it an effective tourism campaign, if nothing else. 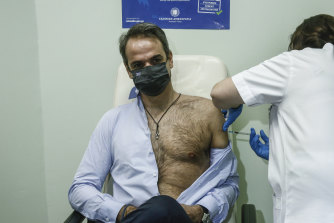 Team Macron cannot have overlooked the Mitsotakis image, nor the wider trend. In France, untamed body hair is currency. Serge Gainsbourg knew it, and Gaston LeGume, the villain from Beauty and the Beast, sang it: “As you see I’ve got biceps to spare […] and every last inch of me’s covered with hair!” If any nation on earth was going to embrace the return of he-vage, it was the French.

Naturally, conspiracy theorists have dug up old images of Macron on the beach and questioned why he seems to have more hair in his new chesty thirst trap than he used to. They have a point.

The Élysée will get back to those queries in due course. For now, as the age of he-vage takes over, they will be busy thinking of ways to get the rug out on the campaign trail again, even if it means adding accessories.