‘Leave for your own safety!’ Halloween reveler in NAZI uniform is ordered out of Manhattan restaurant after outraging diners with his huge swastika armband

Guests at a New York City bar looked on in horror as a man dressed in a Nazi costume walked in to the establishment over the Halloween weekend.

Now viral video shows the man in full Nazi brigs, including an armband with a swastika on it. He was immediately forced out of Fanelli Cafe, a popular bar in the swanky SoHo neighborhood.

‘A guy just walked into fanelli cafe in soho dressed as a nazi,’ the original poster of the video wrote in the tweet. ‘I have no words.’

The unidentified patron is seen smiling as he approaches the bar while onlookers gasp in shock. 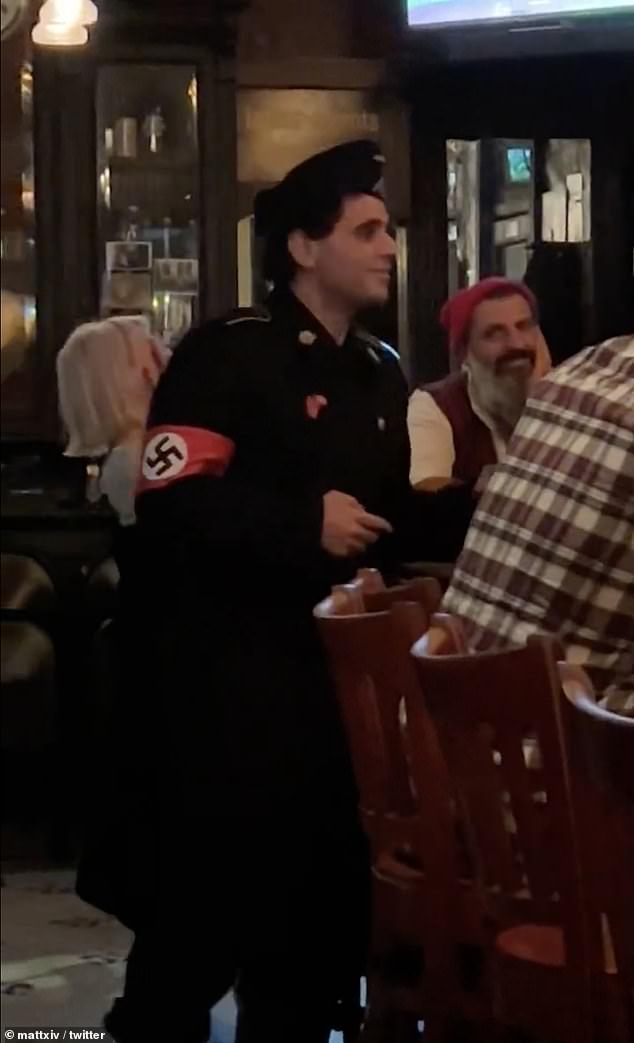 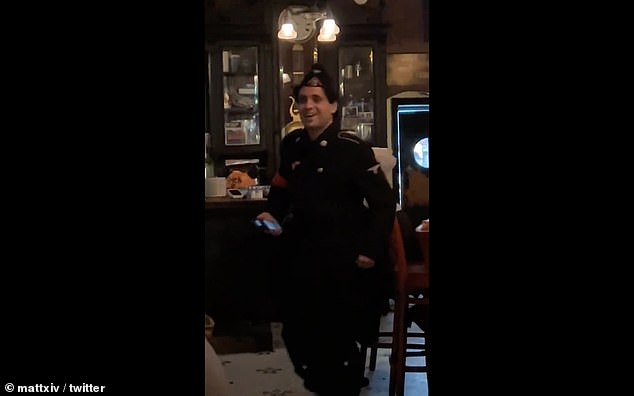 The unidentified man chuckled and shrugged as people inside Fanelli Cafe asked ‘what is wrong with you?’

As the man stands at the bar, purportedly to order a drink, one woman can be seen covering her face in horror as another man sitting next to her glares at him.

Another woman can be heard asking the man loudly, ‘what is wrong with you?’

Other patrons chime in, telling him to ‘get out of here,’ and ‘what the f**k was that?’

The man wearing the Nazi costume smiles and shrugs while patrons continue to confront him over his choice of attire.

‘F**k you mate,’ the man responds at one point in the video.

‘You want to get f—ed up? [Leave] for your own safety,’ says a person as the man hovers near the doors to the bar.

One patron was so upset by the incident that he stood up from his table several feet away from the man, pointing towards the exit and ushering him out.

DailyMail.com reached out to Fanelli Cafe for comment on the incident and received the following: ‘We have no comment at this time.’ 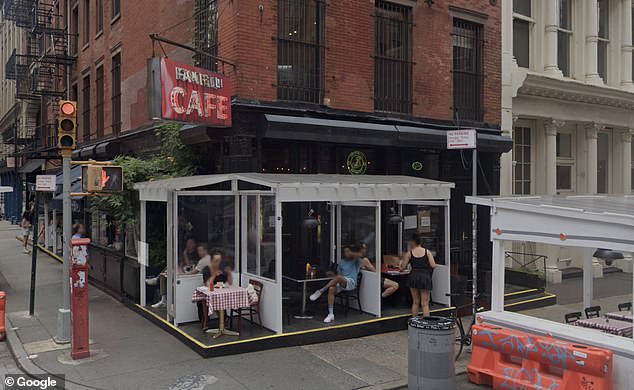 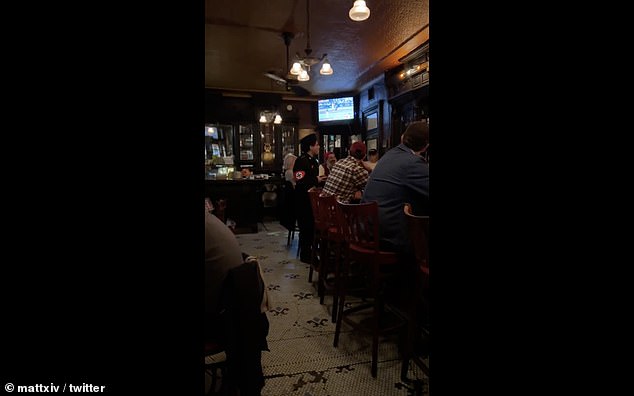 In the video, the man stands at the bar as others stare at him and one person records 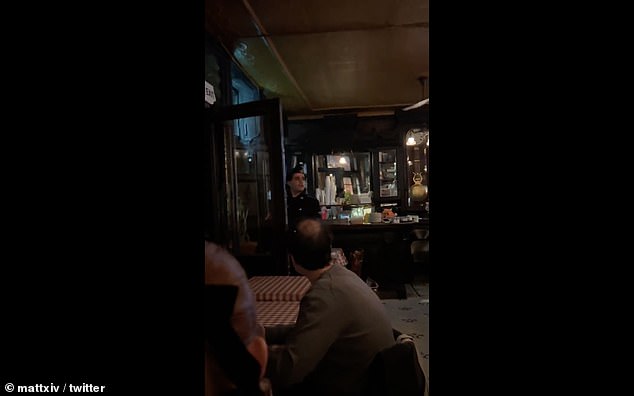 The 18 second video has sparked major outrage on social media as Twitter users attempt to understand what the man’s state of mind could have been.

‘Wow, imagine your life is so sad and pathetic at this point that the only way you can do something fun is to purposefully piss everyone off by doing the most offensive thing possible.’

Another person on Twitter responded with a picture that reads ‘Nazi lives don’t matter.’

‘Why he’s mad he’s getting kicked out? Like did he think he wouldn’t get people upset with this costume or something,’ said another. In a response to that tweet, another user wrote: ‘he’s there testing boundaries. he feels safe on the street dressed like that. people should change that for him.’

The video was posted by this Twitter user, who identifies as both gay and Jewish, according to his Twitter bio

‘Honestly is so disgusting to still see stuff like this in 2022. People seem to think it was a long time, when in fact I’m only the 2nd generation after the Holocaust,’ said another.

‘Thankfully they tossed him out. It’s going to get worse unless people decide not to put up with it,’ one Twitter user wrote in response.

The original post has received more than 87,000 likes since being uploaded to the site late Saturday evening.

More than 3,300 people have quoted the tweet, adding their own comments, and nearly 8,000 have simply retweeted.

One Twitter user received more than 11,000 likes for commenting on how the Nazi regalia is never ‘a costume’

The man who posted the video to the social media app identifies as both gay and Jewish, according to his Twitter bio. Both identity groups were heavily targeted by Adolf Hitler and the Nazi party during the Holocaust.

More than six million Jews were killed by the Nazis while the number of LGBT+ victims remains unknown to this day.

The incident comes shortly after an antisemitic message was displayed on the exterior of the TIAA Bank Field in Jacksonville, Florida, following Saturday night’s game between the Florida Gators and the Georgia Bulldogs.

The message displayed after the game read: ‘Kanye is right about the Jews.’

The antisemitic comment prompted a joint response from the team’s who had played earlier in the day.

‘We are proud to be home to strong and thriving Jewish communities at UGA and UF, and we stand together against hate.’

The message of hate also prompted a response from the Southeastern Conference, which the teams play in.

‘The SEC denounces all forms of hatred and intolerance,’ the league said Saturday evening.

They also condemned ‘other antisemitic hate-speech in Jacksonville on Saturday,’ referencing video that showed the same message about Kanye West projected onto other buildings in the area.

The message is referencing rapper Kanye West’s recent antisemitic comments which have since seen him dropped from several of his partnerships, including GAP, Adidas, and Balenciaga.

Earlier this year, West tweeted that he wanted to go ‘death con 3 on JEWISH PEOPLE.’ 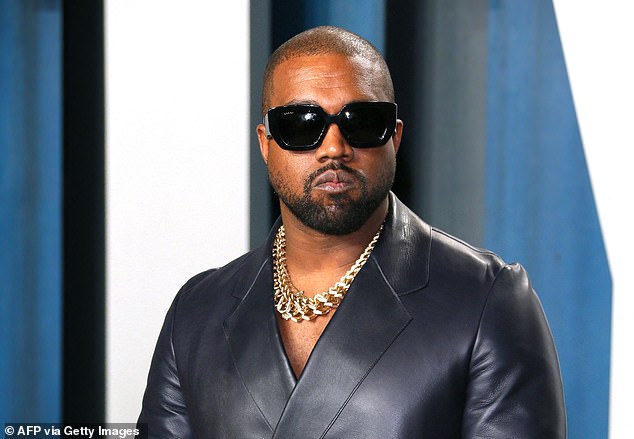 Kanye West’s Twitter and Instagram accounts were restricted, with the social media platforms saying they removed his posts that online users condemned as antisemitic

He then tweeted: ‘The funny thing is I actually can’t be Anti Semitic because black people are actually Jew also…you guys have toyed with me and tried to black ball anyone whoever opposes your agenda.’

The rapper was asked by Piers Morgan on Wednesday if he regretted the tweet and he said: ‘No. Absolutely not, absolutely not.’