A brave beachgoer frees a great white shark from a fishing line on a California beach.

A great white shark became entangled in a fishing line near the coastline at a California beach. Fortunately, one brave beachgoer jumped into action and was able to free the animal before anyone got hurt. 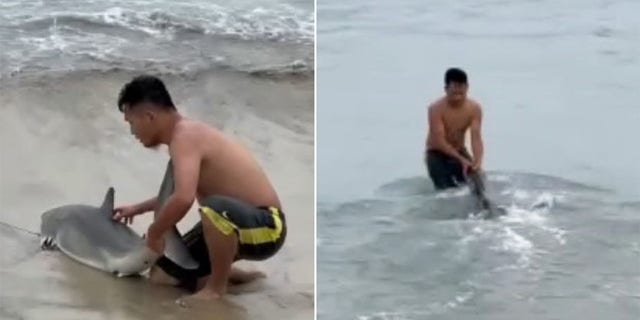 Kelly Bailey, who filmed the incident, explained that no one could tell that the fish was actually a great white shark until it was pulled close to the beach.
(Kelly Bailey)

Kelly Bailey filmed the incident, Fox 5 San Diego reports. According to her, no one could tell that the fish was actually a great white shark until it was pulled close to the beach.

“I was walking over towards the Jetty where my son and his cousins were exploring and I noticed a fishing line pulling from far out in the water,” Bailey told the news outlet. “I then saw a man reeling in a large marine reel and another man running towards the water with a spear. After the man was fighting to reel in what we all thought was a sport fish, was told by the other man holding the spear that it was in fact a shark.”

In the video, an unidentified man runs into the water and grabs the shark, guiding closer to the shore. He holds the animal while another man cuts the line, before finally guiding the shark back out to sea.

A spokesperson for the California State Parks department explained to Fox 5 that a situation like this wouldn’t require any warnings or beach closures.

He explained, “For this scenario, we would not post signs or close the beach for two reasons. The first is that a White Shark this small primarily feeds on fish and stingrays. Secondly, this was a non-active interaction, the shark was not seen in the aquatic recreation zone prior to or after its release. The only reason it was seen in the aquatic recreation zone was because it was manually brought to shore by the fisherman.”

Related posts:
June 24, 2021 World News Comments Off on Man rescues great white shark after it gets caught in fishing line at California beach
Celebrity News:
What Is Offset's Real Name?
How Did Courteney Cox Meet Boyfriend Johnny McDaid? What Is Their Age Difference?
It Was Love at First Sight When Track Athletes Tara Davis and Hunter Woodhall Met at Age 16
Scooter Braun Officially Files For Divorce From Yael Cohen – & Already Has A Prenup In Place!
OMG! Prince William Is Also Writing a Book After Harry's Memoir News
Recent Posts