Britain vaccinated people faster against Covid than EU countries because it is free of Brussels’ bureaucracy, the bloc’s chief negotiator has admitted.

Michel Barnier, 70, said that ideology, red tape and an aversion to risk-taking led Europe to bungle its early vaccination drive – with just 24 per cent of the continent’s population given at least one vaccine up to now, compared to 50 per cent in the UK.

He said lessons should be learned from the current crisis, including whether more powers should be given to countries to make decisions independent of Brussels.

But he added that it is still ‘too early to tell’ which countries have coped best with the pandemic, and insisted there is little to be gained from games of ‘one-upmanship’. 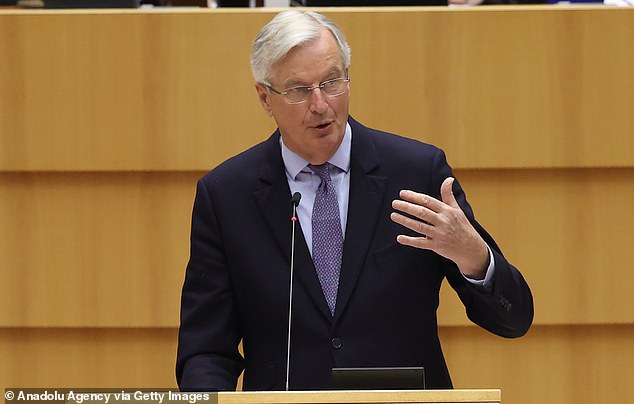 Michel Barnier admitted today that red tape, ideology and an aversion to risk-taking within the EU had hurt the continent’s vaccine roll-out

Speaking to France Inter, Mr Barnier said: ‘I recognise that there were administrative problems, bureaucracy [within the EU].

‘There was an almost ideological mistrust of public-private partnerships. We don’t know how to take risks.

‘The British took risks by financing the private sector. The Americans took risks. We don’t know how to do that yet.’

He added that ‘lessons’ should be learned from the current crisis, including whether countries could be given more powers to act independently of Brussels in the future because independent nations are capable of moving quicker than blocs.

But he continued to insist that signing vaccine contracts outside the EU would have been a bad idea, because it would have meant smaller countries getting left behind.

‘That is not, in my view, the philosophy of the EU,’ he added.

Mr Barnier was speaking ahead of the release of his book – Le Grand Illusion – about four years spent negotiating with the UK government over Brexit.

He spoke at length about the upcoming election in France and Marine Le Pen’s challenge to President Macron as she gains on him in the polls.

Barnier said he will be active during the campaign season, vowing to defeat Ms Le Pen, who he said is in league with Nigel Farage and Matteo Salvini – the Italian Lega Nord party leader – in trying to bring down the EU.

Ms Le Pen campaigned openly for a French exit from the EU during the 2017 election that she lost to Macron, but has since dropped the issue – at least in public.

Asked whether there are any lessons to be learned from Brexit that could help Macron’s chances, he said ‘less bureaucracy in Brussels’ is essential and called for leaders to ‘demonstrate the added value of the European project’.

Pressed on what those benefits are, Mr Michel responded that the EU will allow nations to preserve decision-making in Europe, rather than being dictated to by other world superpowers.

‘[The EU] is vital for us if we don’t want to be dependent and subcontractors to America or China,’ he said.

‘I don’t want my children’s future to be decided in Washington or Pekin.’

Asked for his opinions on Boris Johnson, Mr Bariner added: ‘He clearly has intelligence, he is quite cordial, warm, very pragmatic.

‘I think he needs a bit more time to demonstrate his qualities as a statesman but he clearly has intelligence as a government man, even if I found some of his comments as foreign minister curious.’

The UK has given more than half its total population at least one dose of Covid vaccine having secured supplies early and extended the time between first and second doses to 12 weeks, allowing its initial drive to take off at blistering pace. 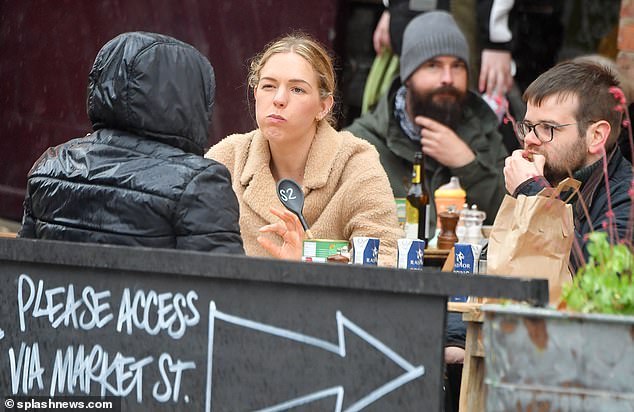 As a result of the vaccine drive, the UK has begun easing lockdown with outdoor pubs and restaurants allowed to open (pictured) – while lockdowns have been tightened in Europe

As a result, Covid cases have fallen to some of the lowest levels seen since the pandemic began, and deaths have slowed to a trickle.

Schools, workplaces, non-essential retail and gyms have been allowed to reopen, while bars and restaurants are able to serve people outside.

The next round of easing is due on May 19 when socialising indoors will be permitted, with most measures to be dropped by June 21.

By comparsion, Europe has jabbed just 25 per cent of its total population after late orders, red tape and cautious regulation of jabs slowed the drive down.

The continent is starting to catch up, with the likes of Germany and Spain now vaccinating more people per day than the UK, though only by a slim margin.

As a result, the continent has been left vulnerable to a third wave of the virus that has seen lockdowns tighten in countries such as Germany and France even as measures in the UK have been eased.

European leaders still insist that they are on course to reach herd immunity – with at least 70 per cent of the population vaccinated – by the end of summer.

The UK government says all adults will have been offered a jab by the end of June.