Ministers will let healthy over-70s be released from lockdown with the rest of the UK amid fears of ‘social unrest’.

The government is keen to clarify rules for the elderly after confusion at the weekend over the official guidance.

Health Secretary Matt Hancock denied that over-70s were being asked to stay in their homes and had a ‘blanket ban’, but information on the government’s website suggested otherwise.

The latest ONS figures show that anxiety levels have doubled during the lockdown and fuelled by the over-70s who are no longer happier than the younger generation. 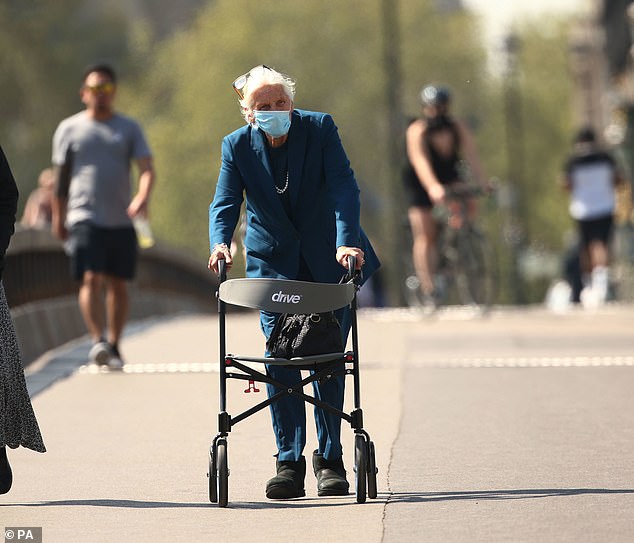 Baroness Ros Altmann, 64, said many healthy over-70s would risk going to prison rather than continue isolating if younger generations did not have to.

The campaigner said using age-based criteria to lift restrictions would send a message that older people’s lives ‘don’t count in the same way as others’. 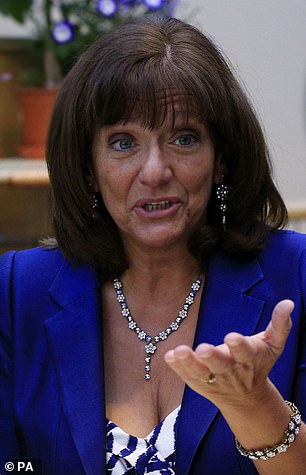 Baroness Ros Altmann, 64, said many healthy over-70s would risk going to prison rather than continue isolating if younger generations did not have to

The government is currently reviewing its lockdown policy with Boris Johnson expected to unveil changes to current strategy on Sunday. Other European countries have already begun relaxing some restrictions, with millions returning to work in Italy yesterday.

A cabinet member told The Telegraph they would be ‘very surprised’ if there was any tightening of the lockdown for the over-70s.

The minister added: ‘The all over-70s grouping is going to morph. There is a big difference between the 1.5million ‘shielded’ people, known as extremely critically vulnerable, who have been sent a letter advising them to shield for 12 weeks, vulnerable people with pre-existing conditions of any age, and healthy over-70s.

‘This needs to be made clearer – you can’t just have a blanket over-70s group, that’s unsustainable.’

It comes after more than 25 million Britons experienced high anxiety in the days after lockdown measures were announced – and women are suffering more than men, a study by the Office for National Statistics said.

While both sexes have noted ‘substantially elevated’ levels of anxiety during the pandemic when compared to last year, women are finding life in ­lockdown harder than men, reporting higher levels of anxiety. 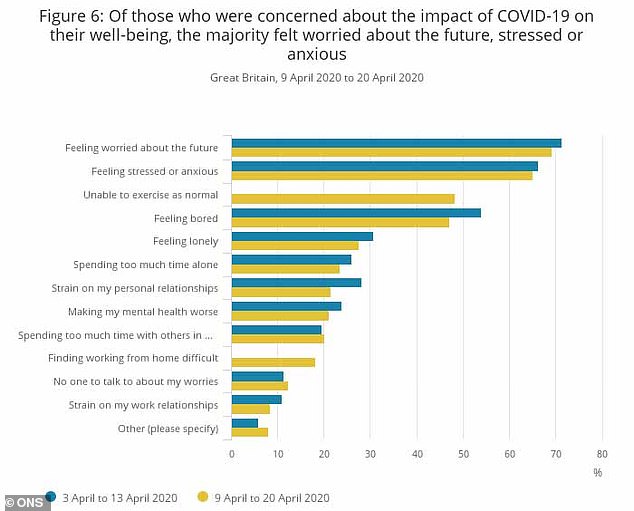 Levels of anxiety in the UK are far higher than usual as the lockdown remains in place, figures released by ONS reveal

The over-70’s in particular are struggling with the lockdown measures, the ONS said:

The ONS found this age group is becoming increasingly unhappy and anxious, and said: “Those aged 70 years and above reported being happier than those aged 16 to 69 years before the lockdown.

‘By the third week of lockdown, however, this gap had closed, so there was no significant difference in levels.

“The Government has advised the over-70s to be more stringent with social distancing measures and to ask friends, family and neighbours for support with essential supplies including food and medicine.

‘This could be leading to higher anxiety for this group.” 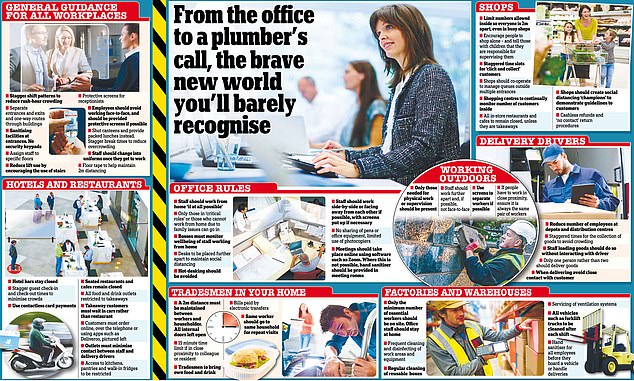 The study was conducted between March 20 and 30 – which follows the closure of cafes, pubs, bars and restaurants.

The most common worries among both men and women related to work and finances, with those fearing they would be unable to save money reporting anxiety 33 per cent higher on average.

Women however reported greater levels of anxiety compared to men, with their average rating 24 per cent higher between April 3 and 13.

But draft guidance seen by the Daily Mail suggested there will be no return to normality in the foreseeable future with the government telling businesses the restrictions could remain in place for up to a year. 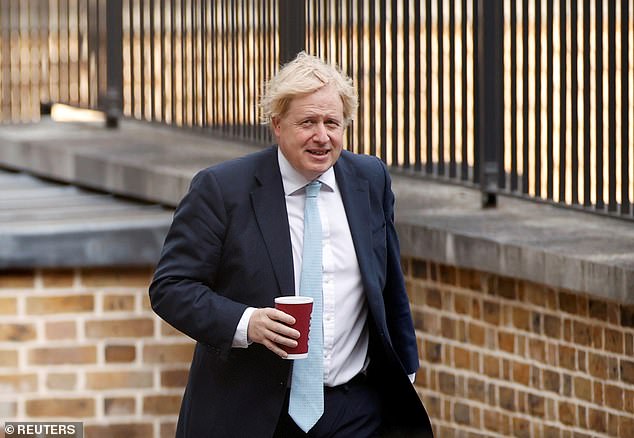 Prime Minister Boris Johnson will unveil the plan to the nation later this week, with Britain’s strict lockdown set to be eased

Employers will be told to close canteens and other communal areas, with staff encouraged to eat packed lunches on their own.

Matt Hancock orders health officials to find why certain groups including the overweight, men and ethnic minorities are more likely to die of coronavirus

An urgent review has been launched into whether obesity, ethnicity and gender raise the risk of death from coronavirus.

Matt Hancock has ordered health officials to trawl through the records of thousands of pandemic victims.

The Health Secretary said it was too early to confirm that weight was a factor but ‘data from around the world’ was suggesting a link.

Researchers at the University of Liverpool warned last week that obesity increased the risk of dying from the virus by 37 per cent.

Around three in ten adults in England are clinically obese – with a Body Mass Index above 30 – a rate among the highest in the Western world.

And Britain’s virus death toll, which rose yesterday to 28,734, is second only to Italy’s among European nations. Scientists believe obese patients are more at risk of serious complications because their immune systems are worn out after repairing cells damaged by excess fat.

Mr Hancock said: ‘Our knowledge about this virus grows daily and it appears some groups are more affected than others.

‘Emerging data from around the world suggests there could possibly be a relationship between obesity and the impact of Covid-19 on individuals.

‘It’s too early to say if obesity in itself is a factor or conditions associated with it – or there is not enough data yet to rule it out – so we need to approach any assumptions with caution.

‘Every death from this virus is a tragedy and behind each statistic is a name, a loss and a family that will never be the same again.’

Shift patterns will be staggered to limit the number of people at work at any one time and reduce rush-hour pressure on public transport. Access to communal facilities like photocopiers will be limited, areas of the floor will be taped off to keep people two metres apart and people could be barred from sitting opposite one another.

Hot desking will be banned and workers will not even be allowed to lend each other a pen for fear of spreading the virus.

As a result of the stringent measures, millions of staff will be told to keep working from home indefinitely ‘if at all possible’.

And firms have been told that ‘vulnerable’ people, including the over-70s, pregnant women and the severely obese, should work from home – even if this means finding them a new role.

The government is believed to have warned industry groups that the restrictions could stay in place for six to 12 months – dashing hopes of a swift return to normal life.

The businesses were told that there will be a ‘gradual winding down’ of the restrictions after the winter, according to The Sun.

The warnings of a year under restrictions are thought to have been influenced by fears among government medical advisers that the coronavirus is seasonal.

An industry source said: ‘If it survives the winter, these measures will have to be in place longer.’

Other measures introduced will include safety guidance for ‘in-home workers’, including cleaners, cooks  and plumbers, as well as people offering services like fitness trainers.

The measures will also encourage taxi drivers to use contactless payment where possible.

Meanwhile, retailers have been told to ask customers to ‘shop alone’ to prevent queues when high street stores finally reopen.

But there is no sign of any return for pubs and restaurants, except those offering takeaway services.

The plans will form a central plank in the Government’s proposals for the ‘second phase’ of the coronavirus crisis, which are set to be unveiled by Boris Johnson at the weekend.

Related posts:
May 5, 2020 World News Comments Off on Ministers say healthy over 70s WILL be released from lockdown
Celebrity News:
Novak Djokovic is extremely disappointed to be deported from Australia
Lucy Mecklenburgh flaunts baby bump in swimsuit as she kisses fiancé Ryan Thomas
50 Cent’s GF Cuban Link ‘Sick of’ Trolls Accusing Her of Having Plastic Surgery
Bob Saget Revealed COVID-19 Battle Days Before Death: 'It Does Not Feel Good'
Katherine Ryan takes mick out of Molly-Mae Hague backlash amid '24-hour' comment
Recent Posts