Hero dog is found protecting missing girl, 4, after she vanished in the Alabama woods and spent 48 hours in the wilderness with her faithful hound

A four-year-old girl from Alabama who disappeared on Wednesday has been found less than a mile from where she wandered off.

Vadie Sides disappeared for almost a full 48 hours before she was finally located on Friday afternoon.

Authorities said the girl wandered away from a babysitter who is in her 70s, while in a backyard.

Vadie, from the small community of Loachapoka just west of Auburn was found in woods by responders who had bee searching for her. 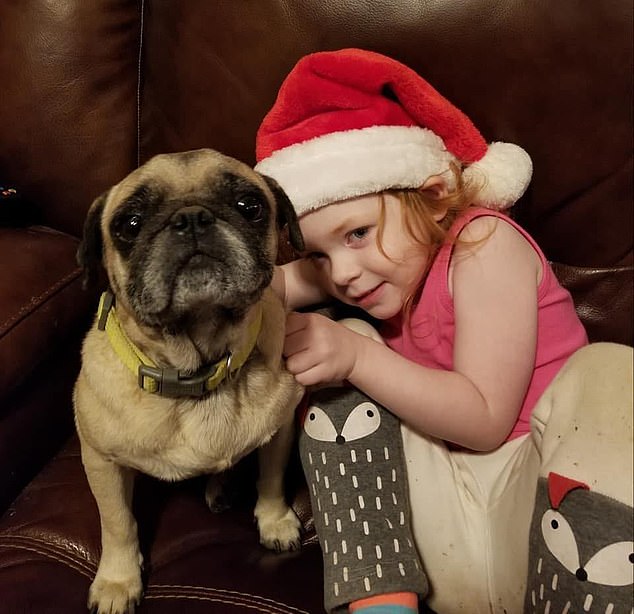 Vadie Sides, 4, had been missing for 48 hours and was found on Friday afternoon having gone missing on Wednesday. The youngster was found in woods not far from her home near Auburn along with her dog 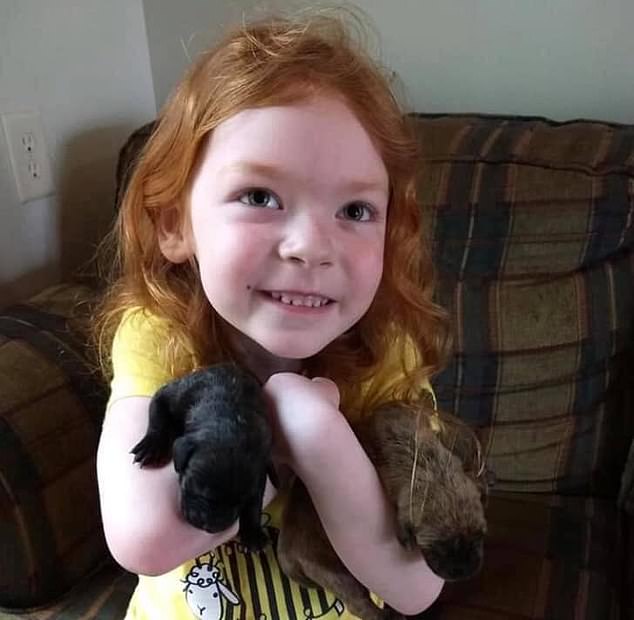 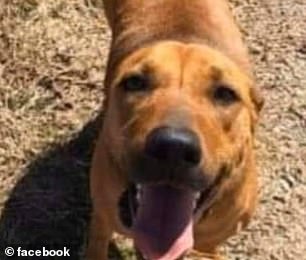 Hundreds of law enforcement officers from multiple agencies helped search for the youngster along with drones and horses.

Her dog was still loyally by her side but ran off as rescuers approached.

‘One of the volunteers that was probably 50 yards to my right … heard a dog bark,’ one rescuer told WRBL. ‘The dog was actually kind of spooked and came at the man a little bit and then saw the line of about 30 of us, and the dog turned around and went down the hill.’

Volunteers ran after the dog which was not brought out of the woods at the same time as Vadie.

‘Praise God Vadie was there, she popped her head up, we saw her little red hair,’ one rescuer said. ‘I’ll tell you what, she was scratched up on the knees and the forearms but otherwise in great spirits, she was just talking like ‘no big deal’ … it’s truly a miracle.’ 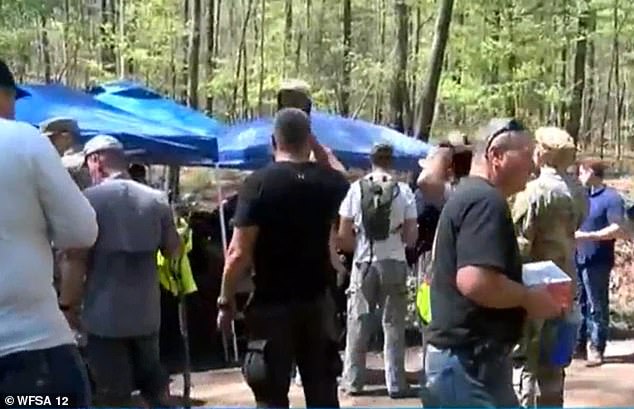 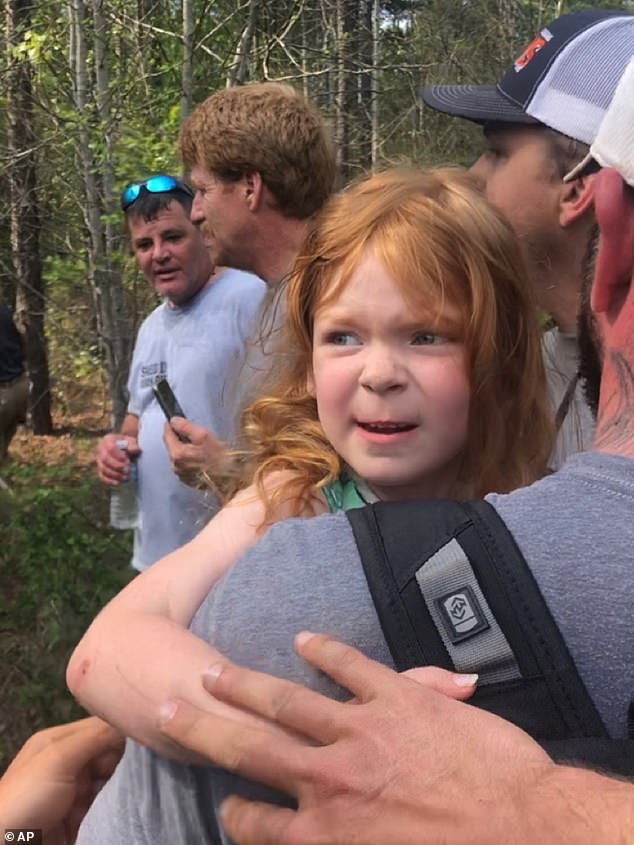 Rescuers carry four-year-old Vadie Sides out of the woods in Lee County, Alabama on Friday. Lee County Sheriff Jay Jones said the girl was found with a dog at her side after two days in the woods. Authorities said the girl wandered away from a sitter while in a backyard.

Vadie’s family were there to greet her as soon as she was found.

‘I’m so happy and grateful to God for watching over my beautiful granddaughter and bringing her safely back to us,” said Vadie’s grandmother, Harriet Sides to Al.com.

The delight was shared by Lee County sheriff’s officials who were overjoyed that she was found safe.

‘We are just, ecstatic might be a good word. She is in good shape, she is responsive, she is talking, she’s alert. She is in good physical condition, and the best part is she is with her mama. 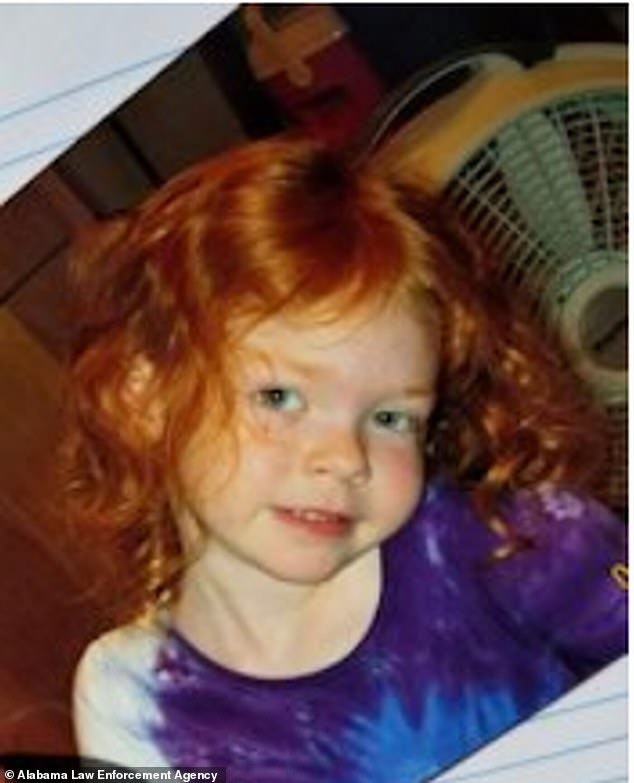 When they found Vadie, a volunteer said: ‘Praise God Vadie was there, she popped her head up, we saw her little red hair. I’ll tell you what, she was scratched up on the knees and the forearms but otherwise in great spirits, she was just talking like ‘no big deal’ … it’s truly a miracle

Sheriff Jones said that all of the volunteers game with the one goal of finding the little girl.

‘Our thanks just don’t seem like enough, but they have our sincere and heartfelt thanks for the sacrifices they made,’ Jones said.

‘Several volunteers said this is such good news at a time when we need it’ Jones said, ‘…and I couldn’t agree more. This was really good, solid, positive news in a time when I think people need it the most, with all the medical concerns going on.’

Although the dog ran away when rescuers approached, it later came home on its own. 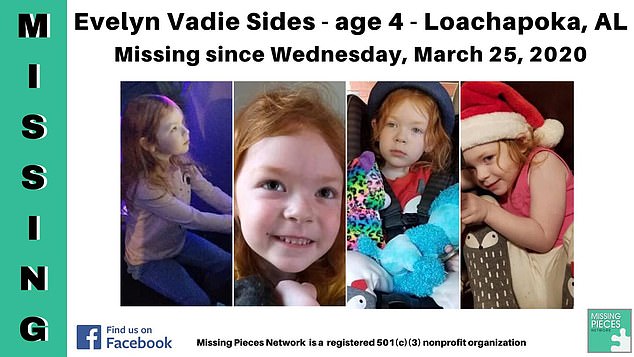 A missing persons poster was distributed when Vadie went missing