Sixteen-year-old Grace Gillard knew Aussie rules football was for her the moment she stepped on the field after she returned from a stretch living in the US.

“A lot of my friends were playing and I thought this could be really cool. I fell in love with it instantly,” says the year 10 student, who plays centre half-back in the Caulfield Grammar girls’ firsts. She had heard some discussion about girls wearing breast protection but didn’t think she needed it until performing “a fantastic smother”. 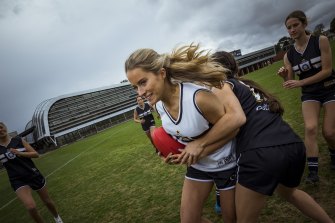 Sports researchers and a growing numbers of female AFL players, including Francesca, Abby, Piper, (getting tackled) Sofia, Jasmine and Grace from the Caulfield Grammar firsts team, and parents are arguing for more awareness of breast protection on the field.Credit:Chris Hopkins

“We were playing Haileybury, I overshot and she kicked the ball straight into my chest and I got hit in the boob by the ball. It actually really hurt.”

Ms Gillard says there is a way to position yourself to avoid being hit hard in the chest, by dipping your shoulder mid-manoeuvre. But, like some other amateur and AFLW players, researchers, parents and coaches, she wonders if girls and women should be wearing breast protection and intends to start using a product called Boob Armour, which has been developed by one of her footy-playing friends’ mothers, Suzie Betts.

The product consists of lightweight polyethylene shells that slide into sports bras and encapsulate the breast, and has been licensed by the AFLW.

Melbourne defender Libby Birch endorses the product, which is less bulky than existing impact vests, and describes it as “a modern-day mouthguard”. She says its arrival is opening up a conversation about a taboo topic.

Women don’t often take any time off sport when they get a breast injury, they will just put up with the pain.

“Up until this point there hasn’t been a conversation about what happens when you get hit in the chest – when I was playing footy [as a younger person] no one ever talked about it,” she said. “We see so many 15 and 16-year-old girls who want to play footy drop out, and I never want the reason to be because it is a contact sport.”

Associate Professor Deirdre McGhee, a breast health and biomechanics specialist who last year reported a four-year study into breast injuries in women’s contact sport, thinks much more examination of incidence, prevalence and impacts of hard bumps to the breast is needed, and is concerned that because women playing men’s sports don’t want to seem weaker, they don’t mention breast injuries.

She found 48 per cent of players in AFL, rugby league and rugby union had sustained a breast injury, but only 10 per cent had reported it, even though two in five said the injury affected their performance.

“These are not even hitting an injury record because there is no injury category to measure it. It doesn’t fit the criteria,” said Professor McGhee. 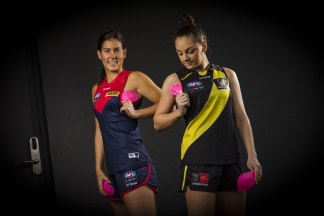 “Women don’t often take any time off sport when they get a breast injury. They will just put up with the pain, have a swollen, bruised breast and keep going.”

Longer-term complications of sports-injured breast tissue had not been well studied, but she said recent research had linked breast injuries with fat necrosis (or dead tissue) that could form lumps that did not resolve if left untreated. There has been some discussion internationally about other breast changes after sports injury.

Especially in these once male-dominated sports their trainers are more concerned about their ACL’s or their shoulders than their boobs.

Professor McGhee has commenced fresh research with several football codes into the incidence and severity of breast injury and will deliver a seminar to AFLW coaches, players and parents in July.

She is expecting the AFL, Cricket Australia and the Australian Institute of Sport to revise their injury codes to include categories for breast injury and says while there is not yet research supporting routine use of breast guards, getting a good sports bra professionally fitted is “fundamental”.

Caulfield Grammar deputy principal Leanne Guillon said since the school joined a full-blown girls’ AFL competition this year it had supported girls wearing protection to allow them to play as hard as they wanted to without fear of injury. The team will be fitted for and trial the guards.

“We know boys wear cups for cricket, to me, the same logic applies … we’re playing catch-up to make sure girls are catered for. It’s logical extension of the mouthguard.” 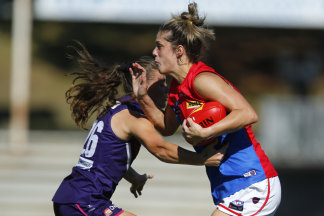 Lauren Pearce, right, of the Demons, fends off a tackle in a Fremantle Dockers clash in March. Credit:Getty Images

Related posts:
June 26, 2021 World News Comments Off on ‘Modern day mouthguard’: female footy players embrace breast protection
Celebrity News:
It Was Love at First Sight When Track Athletes Tara Davis and Hunter Woodhall Met at Age 16
Scooter Braun Officially Files For Divorce From Yael Cohen – & Already Has A Prenup In Place!
OMG! Prince William Is Also Writing a Book After Harry's Memoir News
Courteney Cox: My cooking is a lot better than the restaurants I used to go to
Are Shailene Woodley And Aaron Rodgers Planning Their Wedding?
Recent Posts