Pub-thumping! Moment man walks up to beer garden drinker and rains down punches on him in ‘revenge attack’ for ‘stealing cash from his daughter’s purse’

A man brutally rained down punches on his ‘friend’ in a ‘revenge attack’ for allegedly stealing money from his daughter’s purse.

The disturbing incident saw the enraged man burst into a pub garden outside The Village Inn in Beoley, Worcestershire, and unexpectedly attack his former friend.

Shocking footage and images, provided by News Dog Media, show the man casually strolling up to the unsuspecting male as he drinks a pint with his friends, before sucker punching him in the head.

In the video, which was shared on social media on June 3, the furious man grabs the beer garden drinker by the collar, ripping his T-shirt, and savagely pummels him to the floor. 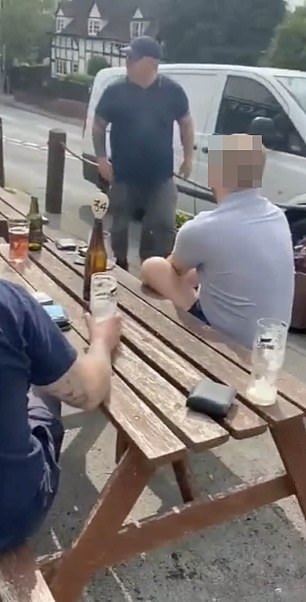 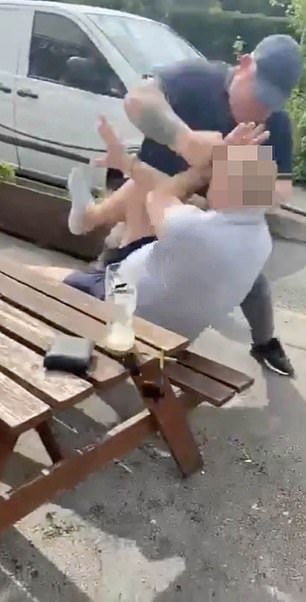 A man brutally beat his ‘friend’ in a ‘revenge attack’ for allegedly stealing money from his daughter’s purse, footage taken outside The Village Inn in Beoley, Worcestershire, shows

The furious man is heard shouting: ‘YOU COME TO MY HOUSE! YOU P***K!’

The beer garden drinker tries to shield his face and get away as the man violently throws him around the pub garden and repeatedly punches him in his head and body.

The unsuspecting man cowers in pain as the incensed father lands a few final blows to his head and calls him ‘A TRAMP!’ before the clip cuts to an end.

Social media users were left gobsmacked by the violent clip, which is believed to have been filmed recently. The identities of the men in the video are not known.

But many people believed the ‘friend’ deserved his punishment for allegedly stealing money from the man’s daughter’s purse.

One online user wrote: ‘If I had a child, I would of done the same tbh [sic]’

Another viewer even commended the assailant: ‘Well done mate, who would dare rob a friends kids! No shame! He got what’s coming for sure [sic]’ 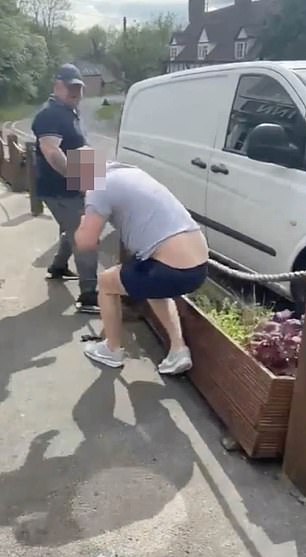 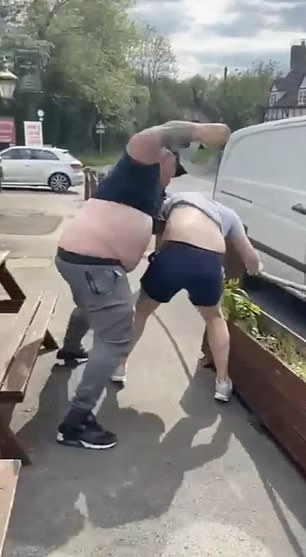 In the video, which was shared online on June 3, the furious man sucker punches his ‘friend’ in the head, grabs by the collar (left), ripping his T-shirt, and pummels him to the floor (right)

Other social media users commented on how the video was seemingly filmed by a man in the group who was aware of the impending revenge attack.

Another person penned: ‘You know the guy who recorded it defo set my guy up. Good man!’

Another individual also commented: ‘Looks like the guy filming knew what was coming when the big man pulled up!

‘That’s why the f**ker who robbed a kid got no backing from his pals. What a set up from his mates!’

Meanwhile, other social media users expressed their shock that none of the other friends intervened in the fight.

One wrote: ‘S***e mates that. Regardless of what your pal has done you don’t sit back and watch that’

Another said: His mates don’t even get up’