If losing an election has few upsides, at least there’s plenty of time for lunch. 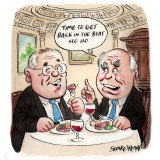 Scott Morrison and John Howard sat down to lunch at the Australian Club.Credit:John Shakespeare

By losing his own seat of Bennelong, Howard avoided a return to the backbench. Morrison isn’t exactly warming to it. Despite parliament’s return, only one of the two Sydneysiders made the trip to Canberra – and it wasn’t the member for Cook.

The event is co-sponsored by the International Democrat Union, a global centre-right alliance chaired by Harper and former Liberal Party director Brian Loughnane, who is currently running a review into the party’s election loss. For those counting, it’s Morrison’s second appearance on the overseas lecture circuit in recent weeks.

Meanwhile, further fuelling speculation that Morrison’s time on the backbenches will be brief, long-term spinner Andrew Carswell has moved on. Until last week, he was the only surviving member of Morrison’s prime ministerial media team answering phones. But all media inquiries are now handled by his Cook electorate office. Tick tock.

The Australian Health Practitioner Regulation Agency (AHPRA) is not backing down from a fight – with anyone – these days.

The federal agency is locked in a spirited industrial stoush with the public sector union over a new pay deal for its workforce and on Monday took simmering tensions with some high-profile members of the doctors’ trade union, the Australian Medical Association (AMA), up a notch.

AMA delegates from around the nation will gather in Sydney on Friday for the association’s annual conference and one item on the agenda will be a call for a royal commission, if you please, into AHPRA.

Things got rough between the two outfits after the regulator imposed restrictions on Broome-based GP David Berger over his behaviour on Twitter, where he would take aim at governments, chief health officers and others over their approach to the pandemic. 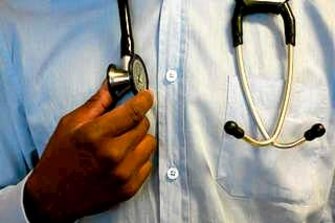 So it’s interesting timing, to say the least, for AHPRA to put out a joint public statement with the Medical Board of Australia on Monday, calling for the profession as a whole to cool it on the socials, warning that social media is “not a forum to bully, harass or intimidate”. The regulator also returned fire on critics who have accused it of stifling free speech.

“There is no place for bullying and harassment in healthcare because it harms the lives and careers of doctors and it harms patients,” the statement reads.

“Oversimplifying this debate to freedom of speech fails the first challenge in improving the culture of medicine – the ability to disagree with respect.”

We can’t think of a profession that likes being told what to do less than doctors do, and we fear there might be precious little of that “disagree with respect” spirit in the air when the medicos gather in Darling Harbour this weekend.

Newby senator for the Australian Capital Territory – and Norfolk Island – David Pocock had an experience too many of us can identify with while visiting his farthest flung constituents last week.

His luggage failed to show up in the Pacific Ocean paradise. Not to be deterred from his regular exercise regimen by a mere lack of activewear, the former ACT Brumby and Wallaby got a little local help in sourcing some training gear from the island’s op shop. 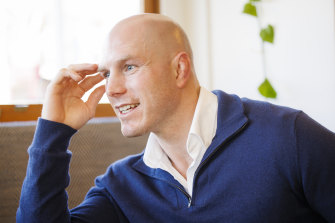 But the footy jersey Pocock managed to buy for his evening hill sprints was less than ideal: the team name Phatphux was emblazoned on the back.

The senator reflected that the episode was a “good reminder to always check the team name when buying secondhand jerseys. There wasn’t much that fitted and we were in a bit of a rush.”

A change of government brings with it a change in fortunes for the lobbyists swarming federal parliament this week. Since Anthony Albanese’s election victory in May, Labor-aligned lobbying shops have had a major boost, among them being Principle Advisory, run by Bill Shorten’s former chief of staff Ryan Liddell.

Liddell, who was with Shorten for his entire tenure as opposition leader, landed a major coup picking up Facebook as a client last week, his seventh new signing since the change of government.

The traditionally Labor-linked Hawker Britton, run by former Kevin Rudd and Simon Crean chief of staff Simon Banks, had a bonanza, picking up over 20 new clients since May, including Transgrid, Citigroup and law firm MinterEllison.

And Anacta Strategies, whose chief, Evan Moorhead, is a Labor powerbroker currently blacklisted from speaking with the Queensland government, listed a flurry of clients on the federal lobbyist register following its post-election debut on the list, including mining giant Glencore.

Car-crash Liberal MP Tim Smith’s dislike of the vast colony of grey-headed flying foxes – fruit bats to most of us – is well known.

So Daniel Andrews’ Labor government would not have been surprised on Monday morning when Smith was triggered by news that $180,000 was to be spent on a sprinkler system to keep the heat-vulnerable creatures cool during the extremely hot days that have bats literally falling dead from the trees most summers.

“These bats are a nuisance, they spread disease, and now the government is going to spend almost $200k to hose them down when it gets hot over summer.

“Yes, as everyone knows, I dislike bats, and many other locals hate them too.”

Environment Minister Lily D’Ambrosio tried to bite back at Smith during her presser in Kew, as she announced the money for the sprinklers, but managed to mangle her zinger.

“What’s the name of that guy who bit the head off the bat? Ozzy Osbourne … famous punk rock band I think, thoroughly outrageous,” the minister said.