A mother-of-two has been ordered to pay compensation and not to contact a transgender woman after a row about whether she should be allowed to use female toilets.

Chinzia Ogilvie was involved in a social media spat with Ivy Burrows, in which she was accused of sending ‘transphobic’ messages that ‘invited hate’ against her.

The 43-year-old, who turned up to court in Portsmouth wearing a badge saying ‘transwomen are men’, argued fiercely that Ms Burrows should not be allowed to use women-only facilities, such as shared changing rooms.

The seven-hour exchange was said to have left Ms Burrows feeling ‘scared’ and ‘distressed’, while it was suggested during the discussion that she might be a paedophile, Portsmouth Magistrates’ Court heard. 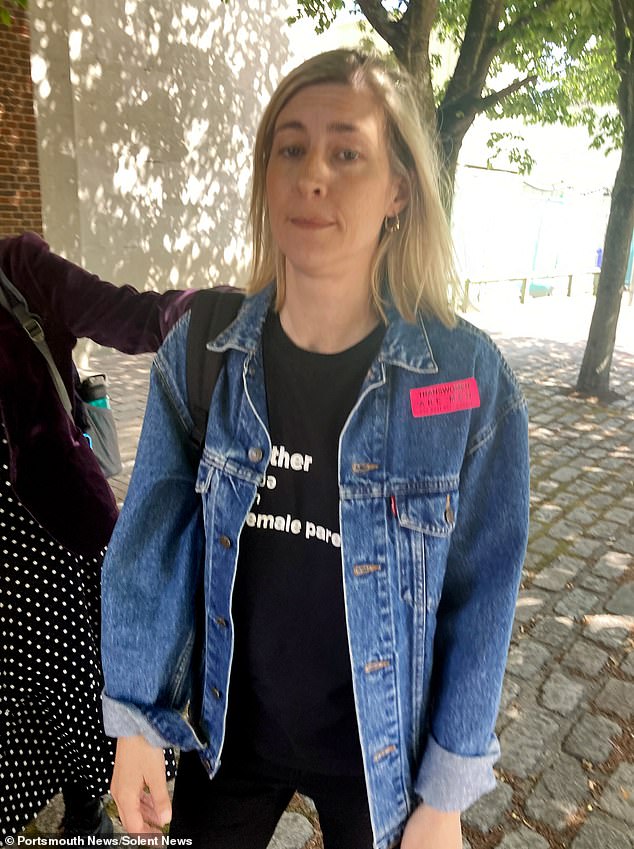 The row erupted after trans woman Ms Burrows made a comment on Twitter about the suffragette movement and tagged Ogilvie on October 2, last year.

The court heard the pair had previously shared ‘diametrically opposed views’ on the platform.

Prosecutor Graham Heath told the hearing that as the debate degenerated, Ogilvie made offensive comments about the victim’s genitalia which ‘made her feel disgusted, violated and degraded’.

However, Tim Sparkes, defending, insisted Ms Burrows was not ‘a vulnerable victim’ but a ‘political activist’ who had started the conversation and also been the first to use a derogatory word. 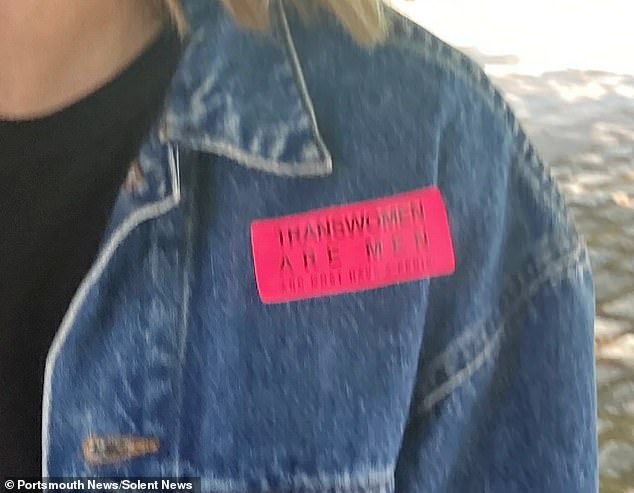 Ogilvie turned up to court wearing a sticker that said ‘transwomen are men’. Portsmouth Magistrates’ Court heard she and Ms Burrows have ‘diametrically opposed views’

He said the pair had known each other and exchanged opinions for five years.

Mr Sparkes told the court: ‘They have diametrically opposed views they have set out on a number of occasions so it is not a new relationship or a new argument. Both put themselves out there in the public domain.’

He described the ‘discussion point’ as centring on Ms Burrows believing ‘transgenders should be allowed to use female facilities with the defendant taking the contrary view’.

He claimed Ms Burrows was the first one to use a derogatory word before Ogilvie responded and ‘lost her temper’.

Mr Sparkes added: ‘It is difficult to say Ivy is a vulnerable victim. She is not. She was part and parcel of the discourse.

‘If you are a person who starts up the conversation it is difficult to see how you exhibit vulnerabilities.’

Ogilvie, of Portsmouth, Hampshire, admitted a charge of sending by public communication an offensive and obscene message during the exchange.

In a ‘victim impact statement’ read to the court, Ms Burrows said Ogilvie had ‘misgendered me’ during the exchange on the public platform seen by other people. 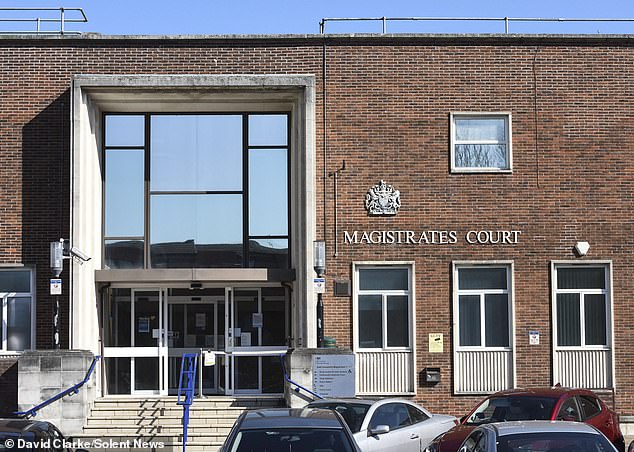 She added: ‘The comments about my genitalia were humiliating and degrading. It’s led to me being anxious and stopping me going out.

‘The anxiety the defendant has caused me has led me to rethink who I am and to think about returning to the closet.

‘I am a transgender woman and am scared of the consequences.

‘Her harassment made it difficult for me to be out as a transgender woman in Portsmouth.’

District judge David Robinson told Ogilvie her transgender views were not criminal but her ‘behaviour became criminal’ with the offensive messages ‘demonstrating hostility’ to transgender identification.

‘The comments seen by Ivy and others left her humiliated and degraded and sought to sexualise her and suggest she was a paedophile,’ he added.

Ogilvie was given a one-year community order with 120 hours of unpaid work and 15 rehabilitation days.

She was also ordered to pay £300 compensation, a surcharge of £95 and costs of £85 and handed a restraining order not to contact the victim for 12 months.