The Central Bank of Myanmar is limiting cash withdrawals from banks and ATMs a month after the country’s military coup.

Individuals cannot withdraw more than 2 million kyat ($1828) from their bank accounts from Monday while businesses are allowed to withdraw up to 20 million kyat a week, according to a directive signed by central bank Deputy Governor Than Than Swe. ATM cash withdrawals are capped at 500,000 kyat a day, half of the previous daily limit.

The move was aimed at “facilitating the transition to digital economy” by reducing cash usage among government agencies and the public, said a letter to the banks dated March 1. 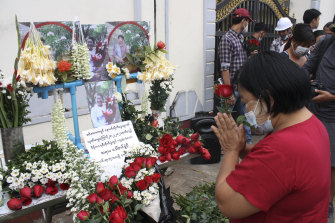 A woman pays tribute to a teacher who killed in Sunday’s protests in Yangon, Myanmar.Credit:AP

“Banks need to prioritise e-payments and electronic transfers for improving cash management of banks and non-bank financial institutions,” it said.

May Toe Win, director general of the Central Bank of Myanmar’s foreign exchange management department, confirmed the letter sent to all banks in the South-east Asian country was authentic.

Except for the state-run Myanmar Economic Bank, most banks have suspended branch operations following ongoing unrest sparked off by the February 1 coup.

Protesters marched again on Monday in defiance of a crackdown by security forces that killed at least 18 people a day earlier, as calls grew for a more united international response after the worst violence since a coup one month ago. 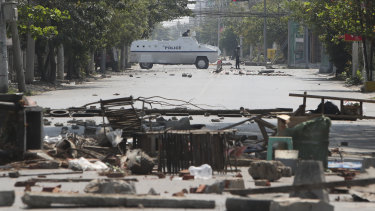 A police armed vehicle moving during the protest against the military coup in Mandalay, Myanmar, on Sunday.Credit:AP

Some protesters called for the destruction of surveillance cameras used by authorities, and shared pepper spray recipes on social media.

Others made metal shields for those on the front lines, who took on police and soldiers in full battle gear. Some security forces present were known to belong to units notorious for tough crackdowns on ethnic rebel groups.

Along one road in Yangon, demonstrators taped to the ground hundreds of pictures of junta leader Min Aung Hlaing, bearing the words “shame on you, dictator, we will never forgive you”. 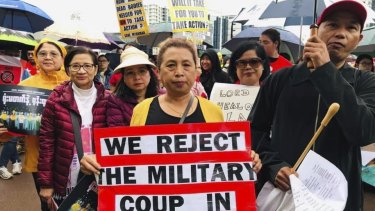 The Myanmar community protests at Parliament House in Parth on March 1.

Live video on Facebook showed a small crowd in hard hats gathered across a street in Lashio, Shan State, chanting slogans as police marched towards them.

“It has been one month since the coup. They cracked down on us with shootings yesterday. We will come out today again,” prominent protest leader Ei Thinzar Maung posted on Facebook.

Clashes took place in various parts of the country on Sunday and police opened fire on crowds in the biggest city of Yangon, after tear gas and warning shots failed to clear protesters demanding the restoration of Aung San Suu Kyi’s government.

Activists across Asia and Australia held protests in support, with the rallying cry “Milk Tea Alliance” which first united pro-democracy activists in Thailand and Hong Kong.

Myanmar has been in chaos since the army seized power and detained elected leader Suu Kyi and much of her National League for Democracy (NLD) party leadership on February 1, alleging fraud in a November election her party won in a landslide.

Having not been seen in public since her detention, Suu Kyi has a court hearing scheduled for Monday. She has been charged with illegally importing six walkie-talkie radios and of violating a natural disaster law by breaching coronavirus protocols.

While some Western countries have imposed limited sanctions, the generals have traditionally shrugged off diplomatic pressure. They have promised to hold a new election but not set a date.