A PUBLICAN who posted ‘you don’t want to miss this’ on Facebook just hours before his Yorkshire Dales pub was torched is fighting for his life in hospital.

Tim Sharp was rushed to hospital after the blaze ripped through The Old Swan Inn, in Gargrave, North Yorkshire. 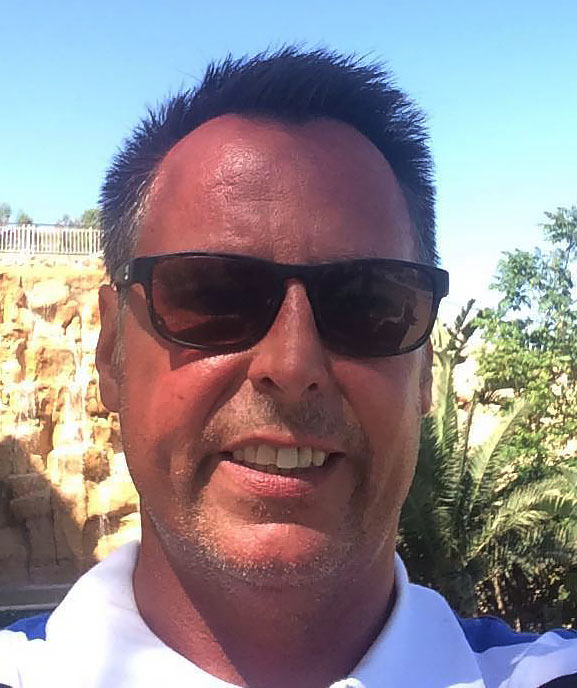 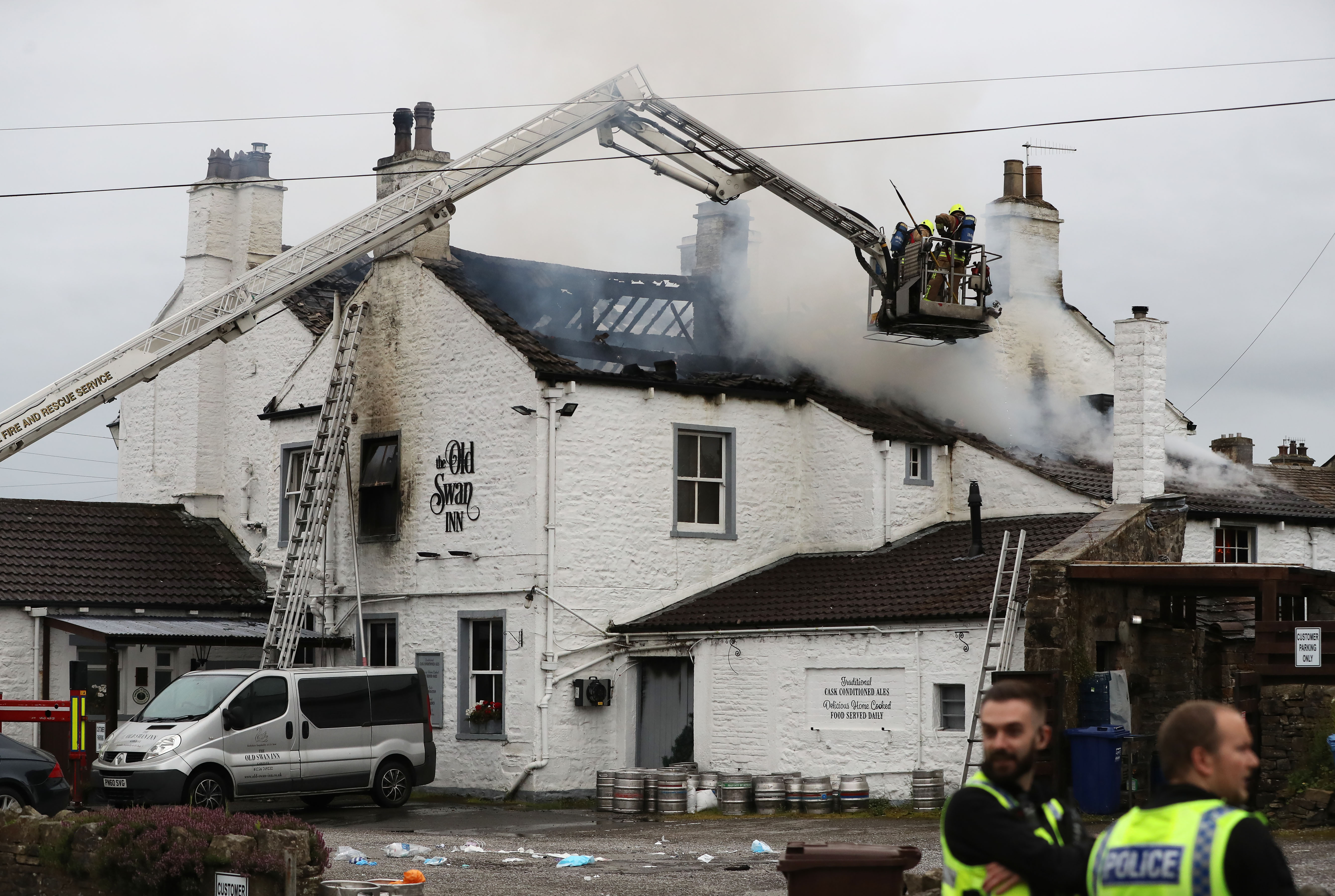 The popular pub had been closed under lockdown since March and was due to reopen in Thursday.

Mr Sharp had recently split from his landlady partner Lindsay Williamson and locals said there were rumours or marital problems.

He was rescued from the roof of the Grade II -listed building as flames licked around his feet and plumes of smoke, which could be seen from miles around, billowed from he white-washed building.

At noon Mr Sharp posted on the pub’s and his personal Facebook page: "So to all the gossipers and gobshites in this village, and there is plenty of them.

'THE TRUTH WILL BE TOLD'

"The truth will be told later today. And I have all the proof of that.

"So stay tuned in as will be going live on Facebook tonight. Believe me you don’t want to miss this Tim x”

It is thought that the pub caught fire around 6pm and Mr Sharp escaped the flames to the roof of the three-storey building.

Mr Sharp had returned to the village a few years ago after making money in the Isle of Man. 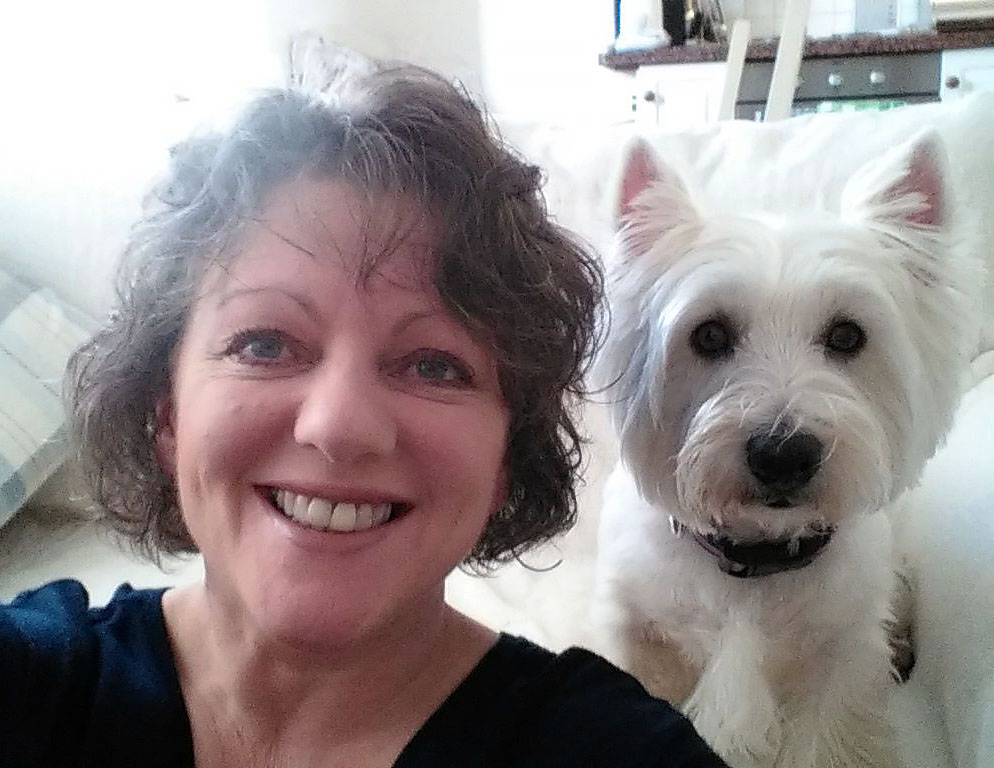 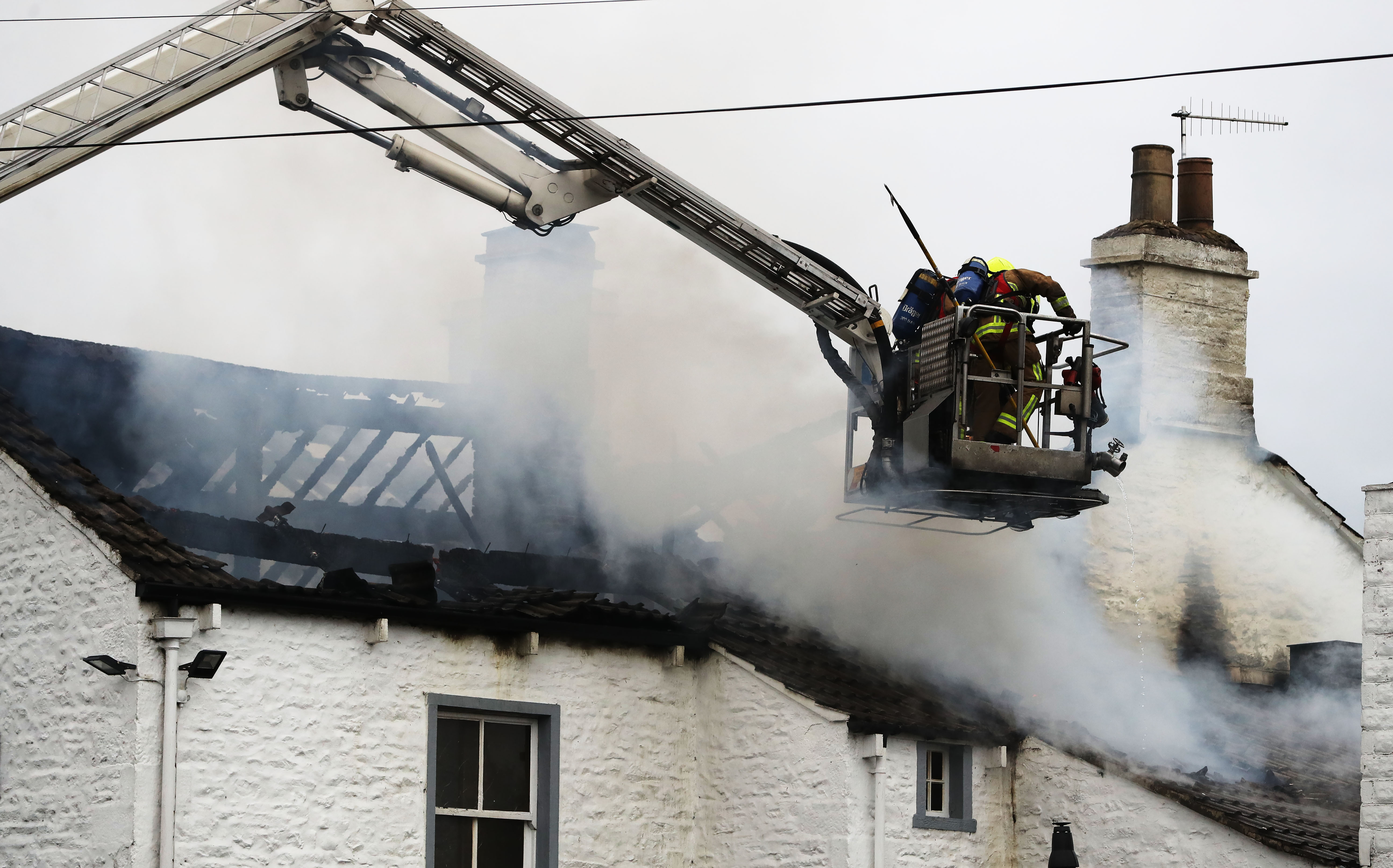 Villagers said he had been the investor in The Old Swan and his partner, both business and personal, was the landlady, Lindsay.

A villager, who was watching firefighters damping down flames at the gutted pub, said: "There were rumours in the village that there had been a marital dispute and Lindsay is living elsewhere at the moment.

“They had been making a real go of the place before the coronavirus struck and they had been sanding the floors and doing refurbishments and preparing for re-opening on Thursday the 9th.”

Russ Hamilton, 55, a pub regular, said: "Lindsay is the landlady, Tim was the investor and her partner.

When I read what he’d posted on Facebook I thought ‘what the Hell?’ and now this

“When I read what he’d posted on Facebook I thought ‘what the Hell?’ and now this.

“They took over the pub about two-and-a-half years ago and were making a real go of it and it was getting back to how good it had been in the past."

North Yorkshire Police closed the A65 – the main route to the Lake District from the Yorkshire Dales – and homes have been evacuated.

North Yorkshire Fire and Rescue tweeted that a man in his 50s has been taken to hospital after a fire at the Old Swan Inn pub, on the High Street, in Gargrave. 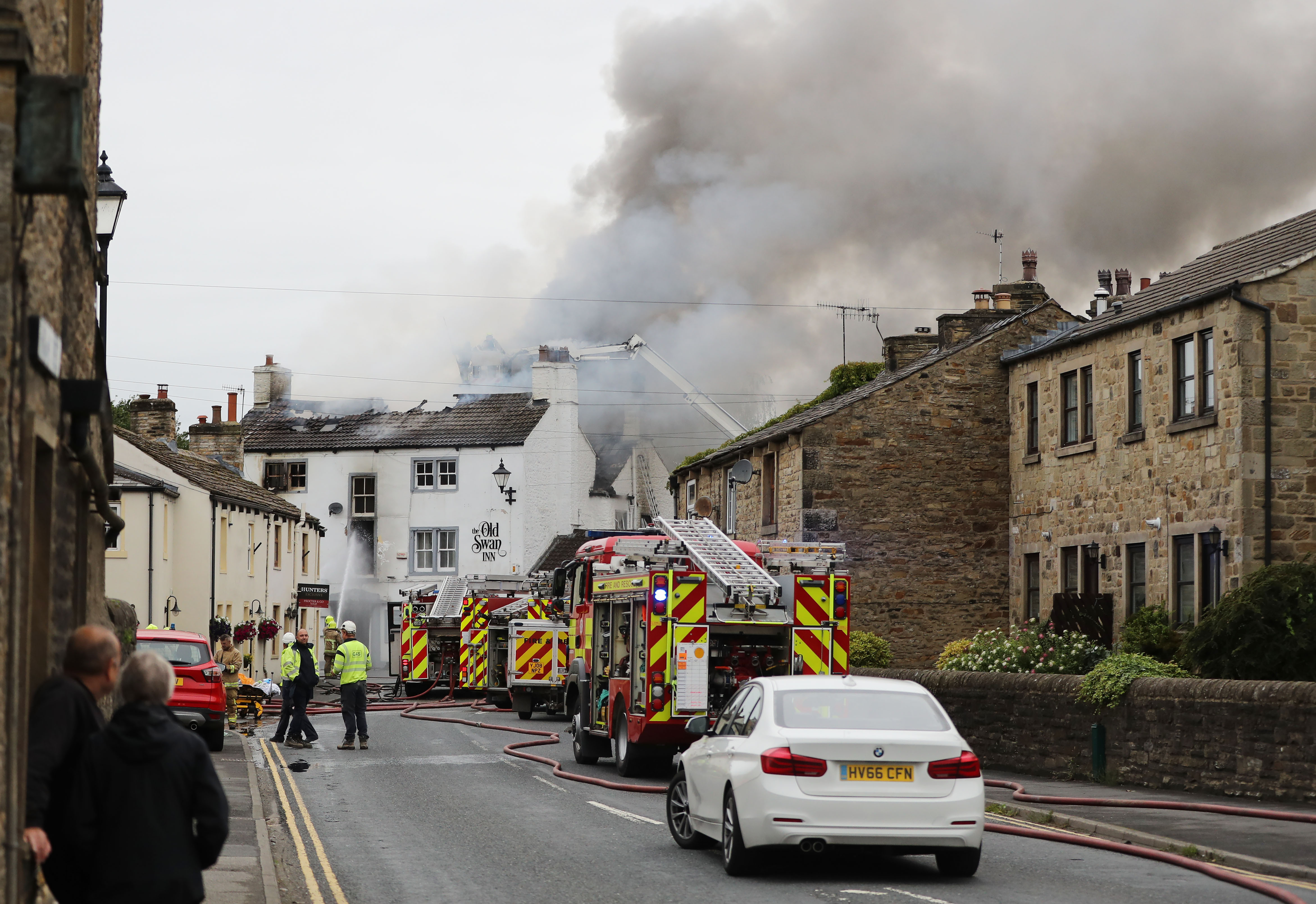 A spokesman said: “Firefighters rescued a person from the roof of the property & are now using Breathing apparatus, hoses & an aerial ladder platform to extinguish the flames.”

Police were contacted at 5.25pm yesterday following concerns for the safety of a man aged in his 50s.

A North Yorkshire Police spokesperson said: "Just before 6pm, police officers noticed a fire inside the pub and a man was seen on the roof of the building.

"Fire crews attended to deal with the blaze and the police tried to engage with the man in an effort to bring him to safety.

"A few nearby properties were temporarily evacuated as a precaution and local residents were urged to close doors and windows due to thick black smoke spreading from the fire.

"Firefighters located the man on the roof of the pub and they brought him down at 6.38pm.

"He was taken to hospital in a critical condition."

A police investigation has been launched and cops have appealed for witnesses to come forward. 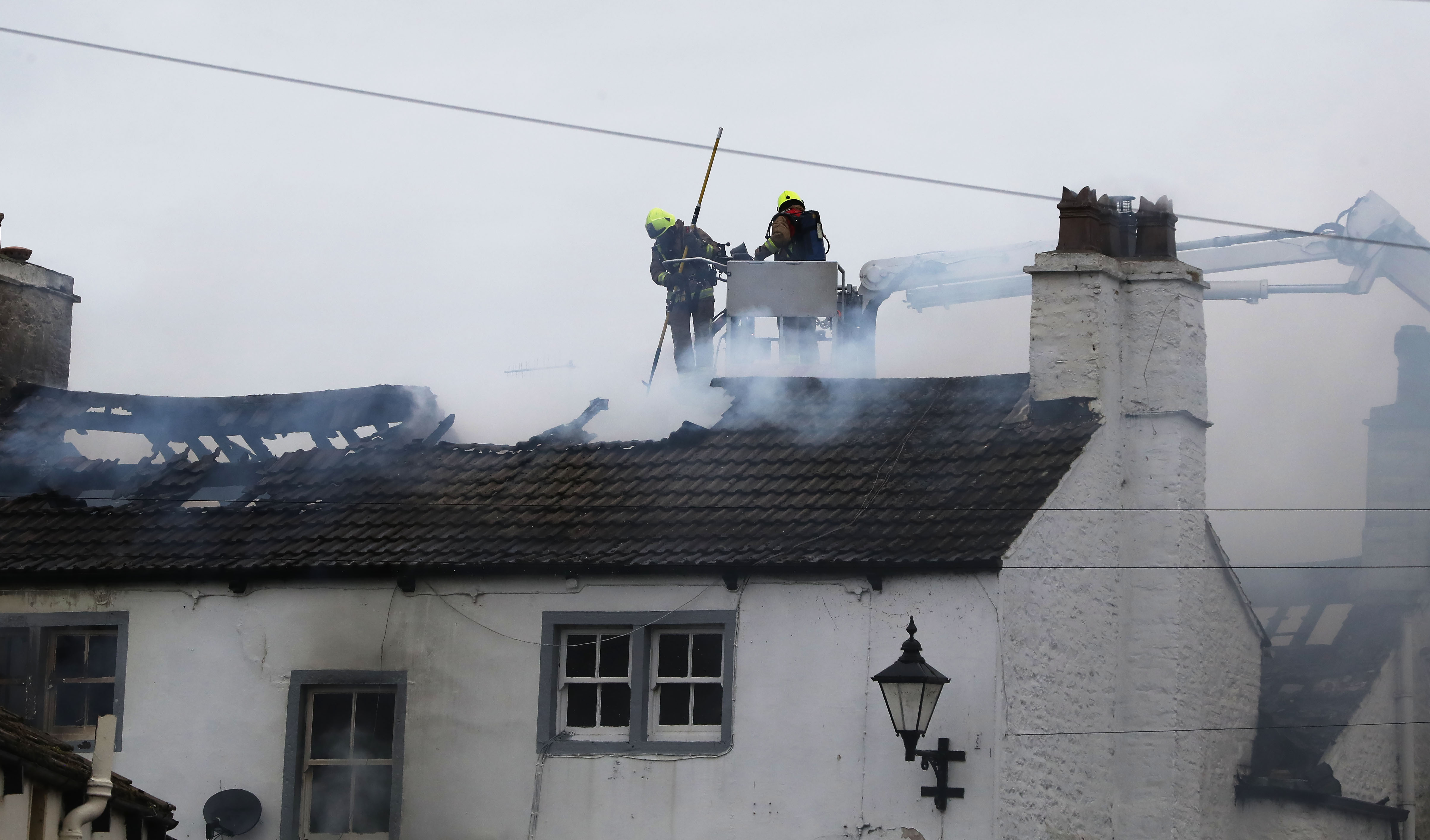 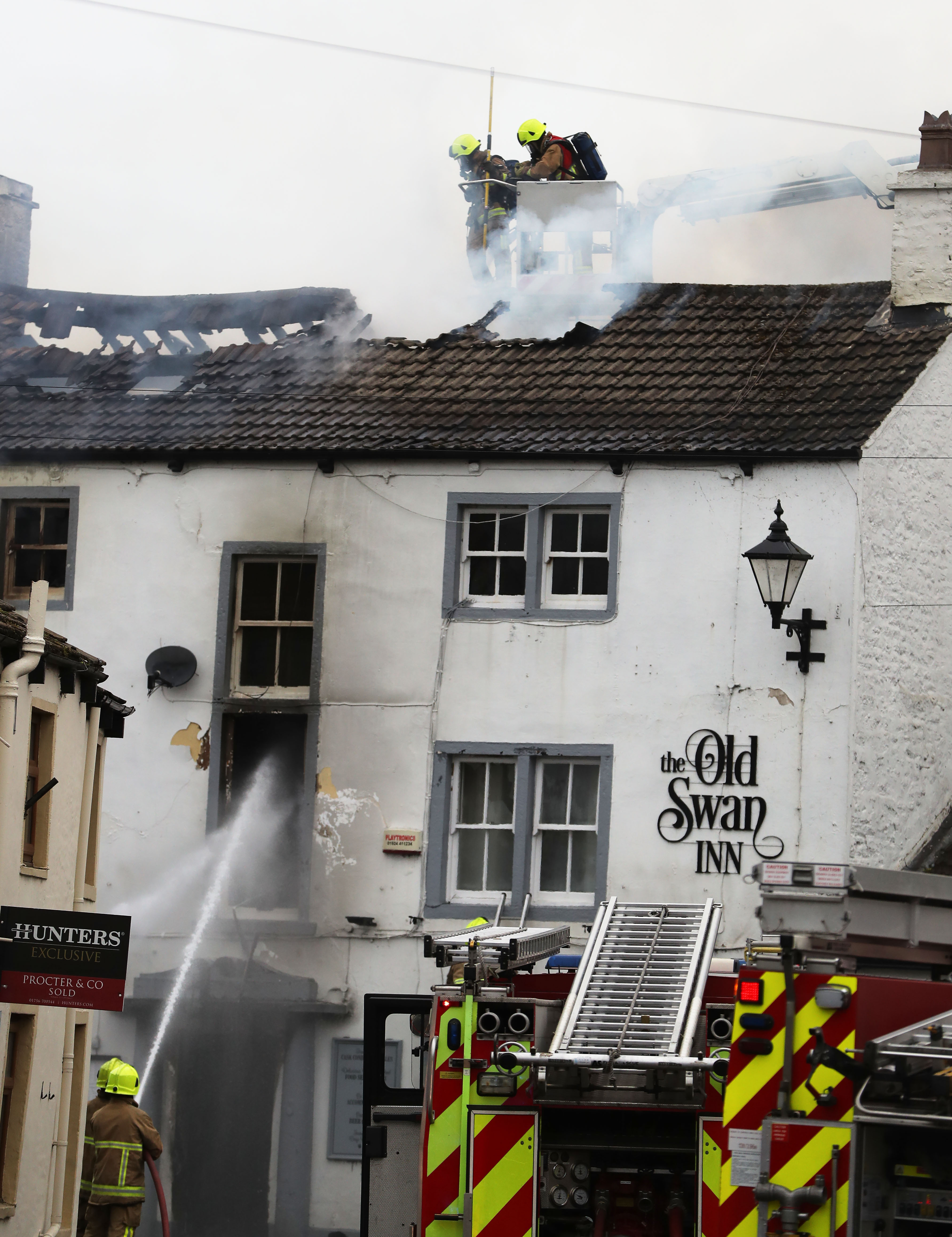 Related posts:
July 8, 2020 World News Comments Off on Mystery as landlord posts 'you don't want to miss this' on Facebook before his pub goes up in flames with him inside
Celebrity News:
Elon Musk got booed on stage at Dave Chappelles show in San Francisco
Gayle King Defends Prince Harry & Meghan Markle’s Netflix Docuseries!
Taylor Swift vs Olivia Rodrigo! | Perez Hilton
Scott Disick 'Regrets' How He 'Handled' Ill-Fated Relationship With Kourtney Kardashian As He Tries To Move Forward
Britney Spears husband breaks silence on her social media break
Recent Posts