Nearly 2,500 Americans die of coronavirus in just 24 hours – marking the highest numbers of deaths in a single day during the pandemic

Nearly 2,500 Americans have died of coronavirus in just 24 hours – marking the highest number of deaths in a single day despite several days in which the number of fatalities fell.

The increase in deaths on Tuesday brought the total death toll in the United States to just over 26,000.

More than 600,000 people have now been infected with the coronavirus in the US after the number of cases increased on Tuesday by 26,500.

New York state, which remains the epicenter of the US outbreak, has more than 203,000 confirmed cases.

New Jersey follows with 68,824 infections and 2,805 deaths. Massachusetts has overtaken Michigan to become the state with the third highest number of infections with nearly 27,000 cases and 844 deaths. 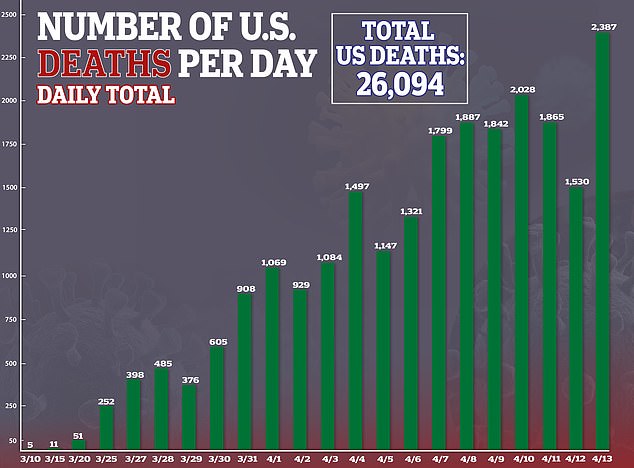 Meanwhile, New York City announced 3,778 additional ‘probable’ deaths attributed to coronavirus that were never confirmed because no test was administered.

The probably deaths, announced on Tuesday, occurred between March 11 and April 13, and when combined with confirmed deaths take the city’s coronavirus death toll higher than 10,000.

Due to a shortage of test kits, particularly in the early days of the outbreak, not everyone hospitalized in critical condition or found dead at home was able to be tested for the virus.

Postmortem tests were often not conducted in order to conserve test resources.

City officials said that the newly announced deaths were ruled probable based on the known symptoms and health histories of the patients who died.

Roughly 60 percent of the probable deaths occurred in hospitals, versus 90 percent for confirmed cases, according to city data.

Brooklyn had the highest number of probable deaths of the five boroughs, whereas Queens has the highest death toll going by confirmed cases.

As of Tuesday afternoon, New York City’s health department had reported 6,589 coronavirus deaths that were confirmed by a lab test, and more than 100,000 confirmed cases.

The change in the city’s accounting of fatalities came after officials acknowledged that statistics based only on laboratory-confirmed tests were failing to account for many people dying at home before they ever reached a hospital. 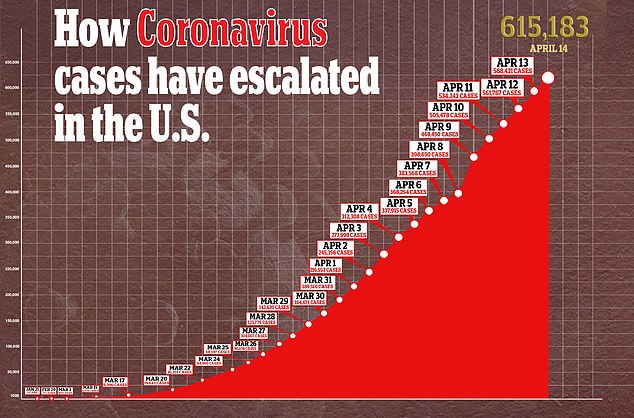 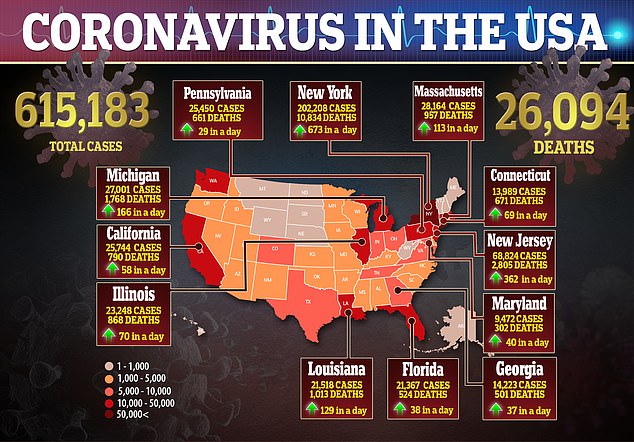 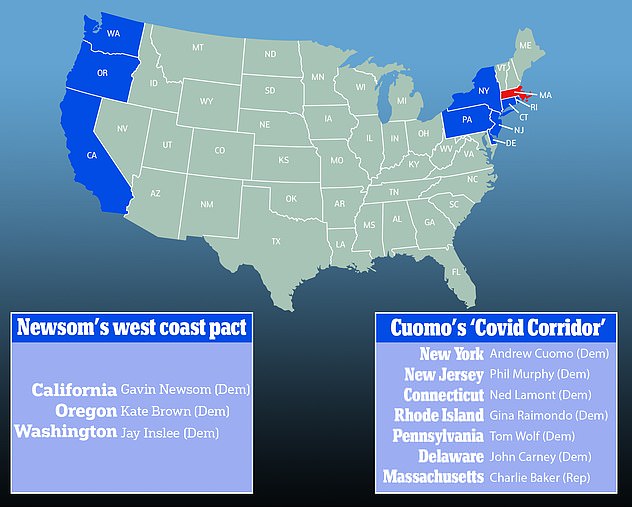 Led by California’s Gavin Newsom and New York’s Andrew Cuomo, the governors of 10 states, including a Republican, revealed on Tuesday a pact to work together to co-ordinate the reopenings of their respective states

The tolls come as lawmakers and health officials work on deciding when the US should reopen again.

Top infectious disease Dr Anthony Fauci on Tuesday stopped short of naming a single state that he believes can reopen before May 1 like President Trump has suggested.

His refusal to name a state came just hours after he was absent from the most recent White House coronavirus press briefing after calling Trump’s lengthy Q&A sessions ‘draining’.

In an NBC interview on Tuesday night, Dr Fauci – the top infectious disease expert in the US – was asked what states, if any, could reopen after Trump flouted that some could reopen even before his federal guidelines expire.

‘I’m certain… that he’s talking about some of the states that have low levels, low density of population and a lot of geographic land,’ Fauci said without naming possible locations.

‘I haven’t gone state by state through them. There is going to be a great deal of variability there. It’s not going to be one size fits all.’

Dr Fauci went on to say that before states reopen, it was imperative that each area was equipped to be able to quickly identify, isolate and treat any new cases to avoid another surge. 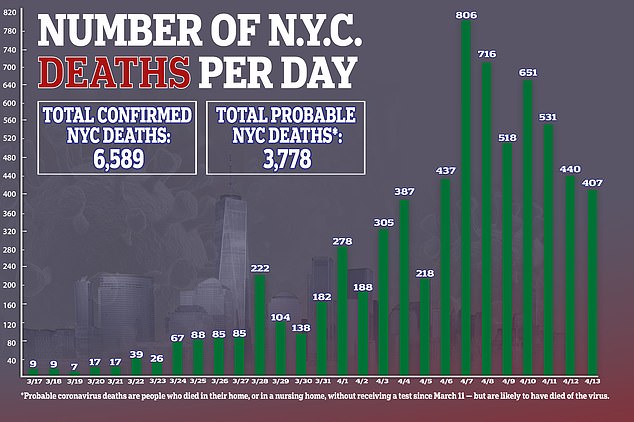 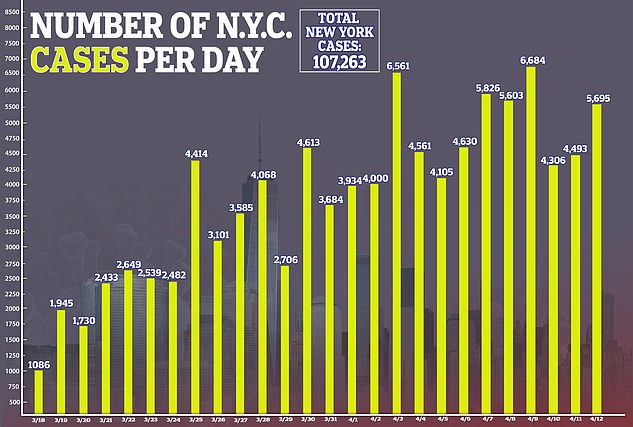 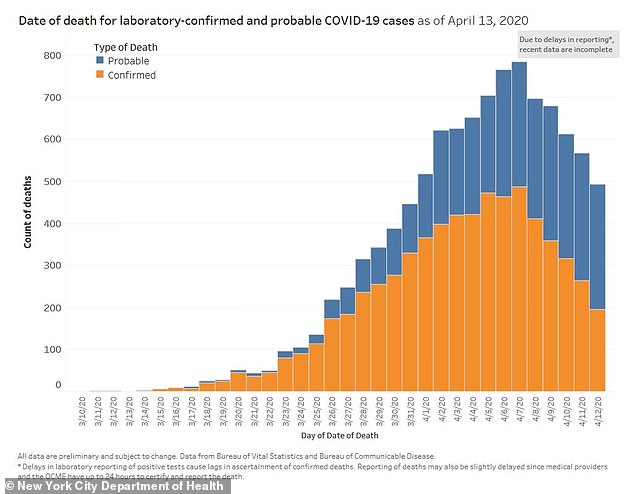 ‘Minimum thing is you have got to be able to identify, isolate, get out of circulation and do adequate and appropriate contract tracing as new cases arrive,’ he said.

‘The real proof of success if how quickly you identify them… and you do contact tracing so you don’t have the beginning of a peak.’

Dr Fauci stopped short of saying whether he believed the worst of the pandemic was over.

Earlier on Tuesday, Dr Fauci echoed his comments saying that a May 1 target date for reopening the economy was ‘a bit overly optimistic’ due to a lack of critical testing and tracing procedures.

He was noticeably absent from Tuesday night’s briefing during which Trump appeared to back off his previous claim of absolute authority to decide when the time was right to act to reopen states.

A battle erupted between Trump and state governors on Tuesday over who has the power to lift restrictions aimed at curbing the coronavirus pandemic.

Hours after suggesting that the bipartisan concerns of governors about his assertion of power would amount to an insurrection, Trump abruptly reversed course Tuesday, saying he would leave it to governors to determine the right time and manner to revive activity in their states.

He said he would be speaking with governors, probably on Thursday, to discuss his plans. ‘The governors are responsible,’ Trump said. ‘They have to take charge.’

Still, he insisted: ‘The governors will be very, very respectful of the presidency.’

Democratic and Republican governors had sounded the alarm after Trump asserted Monday that he and he alone would determine when and how to reopen the economy, despite clear constitutional limitations on federal powers.

Trump said Tuesday he would be authorizing governors ‘of each individual state to implement a reopening – and a very powerful reopening – plan of their state at a time and in a matter as most appropriate.’

He added that he would support moves by states that haven’t been hit hard by the outbreak to ease restrictions even before federal guidelines on social distancing expire April 30.

Trump said the country would open up ‘in beautiful little pieces,’ adding that some states with low rates of infection ‘have fewer people and they have lots of room.’

It’s unclear if any states are actively considering reopening their economies before May 1.

Trump had earlier lashed out at the Democratic state governors suggesting they were ‘mutineers’ after New York’s Andrew Cuomo said he would refuse any order by the president to reopen the economy too soon.

‘If he ordered me to reopen in a way that would endanger the public health of the people of my state, I wouldn’t do it,’ Cuomo told CNN early in the day, referring to Trump.

At a news conference later, Cuomo said Trump was ‘clearly spoiling for a fight on this issue’ and that he did not want a partisan battle, but added, ‘We don’t have a king in this country, we have a Constitution and we elect the president.’

Cuomo, a Democrat whose state has been the epicenter of the U.S. outbreak, and governors of six other northeastern states and one Republican, have announced plans to formulate a regional plan to gradually lift restrictions.

On the West Coast, the governors of California, Oregon and Washington state announced a similar regional approach.