David Dinkins, who broke barriers as New York City’s first African-American mayor, but was doomed to a single term by a soaring crime rate, stubborn unemployment and his mishandling of a race riot in Brooklyn, has died. He was 93.

The department said officers were called to the former mayor’s home this evening. Initial indications were that he died of natural causes.

Dinkins, a calm and courtly figure with a penchant for tennis and formal wear, was a dramatic shift from both his predecessor, Ed Koch, and his successor, Rudolph Giuliani — two combative and often abrasive politicians in a city with a world-class reputation for impatience and rudeness. 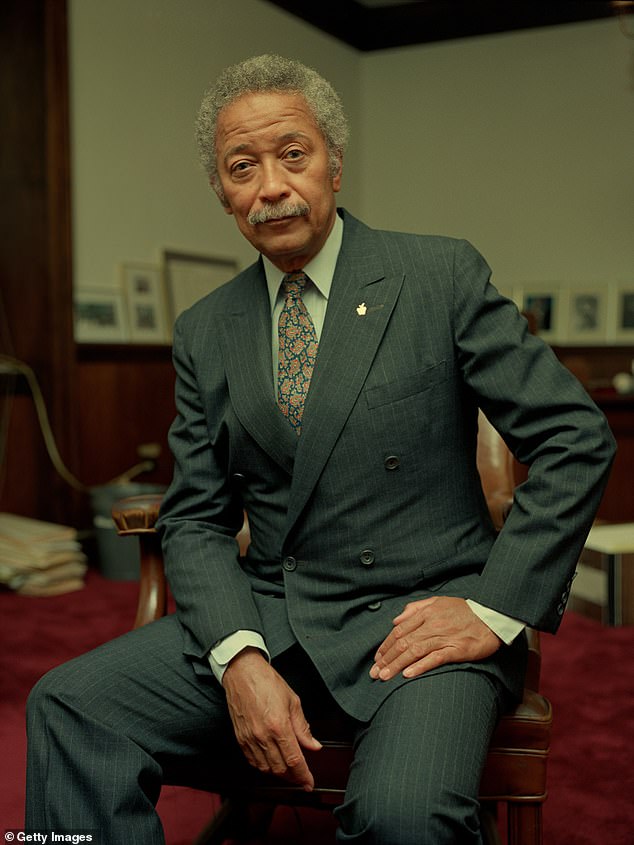 David Dinkins, pictured in his office in 1986, died on Monday night at the age of 93 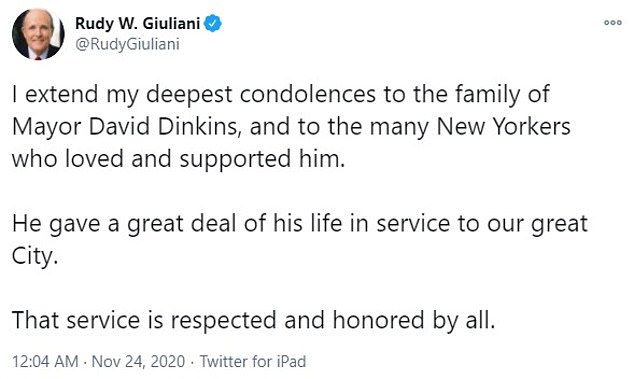 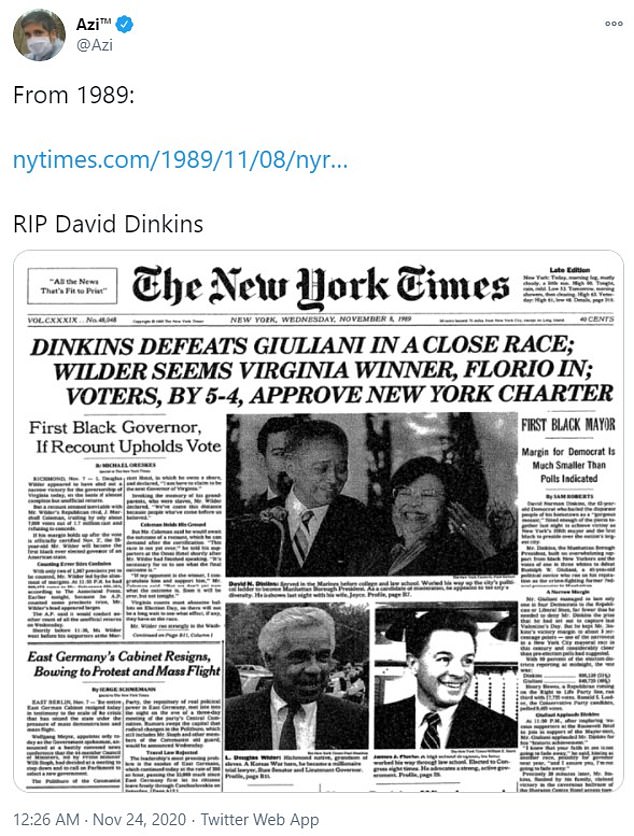 ‘I extend my deepest condolences to the family of Mayor David Dinkins, and to the many New Yorkers who loved and supported him,’ Giuliani said on Twitter.

‘He gave a great deal of his life in service to our great City.’

In his inaugural address, he spoke lovingly of New York as a ‘gorgeous mosaic of race and religious faith, of national origin and sexual orientation, of individuals whose families arrived yesterday and generations ago, coming through Ellis Island or Kennedy Airport or on buses bound for the Port Authority.’

But the city he inherited had an ugly side, too. 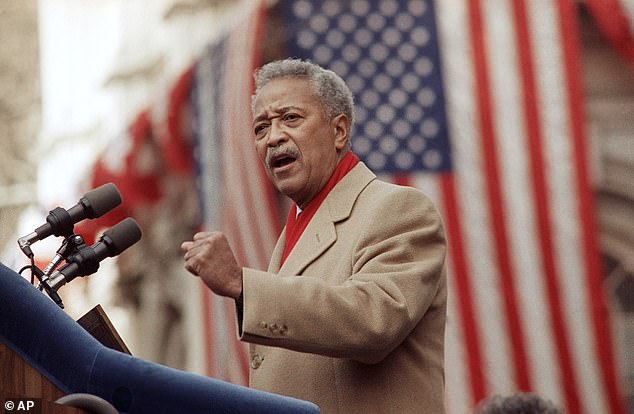 Dinkins’ low-key, considered approach quickly came to be perceived as a flaw. Critics said he was too soft and too slow.

‘Dave, Do Something!’ screamed one New York Post headline in 1990, Dinkins’ first year in office.

Dinkins did a lot at City Hall. He raised taxes to hire thousands of police officers. He spent billions of dollars revitalizing neglected housing. His administration got the Walt Disney Corp. to invest in the cleanup of then-seedy Times Square. 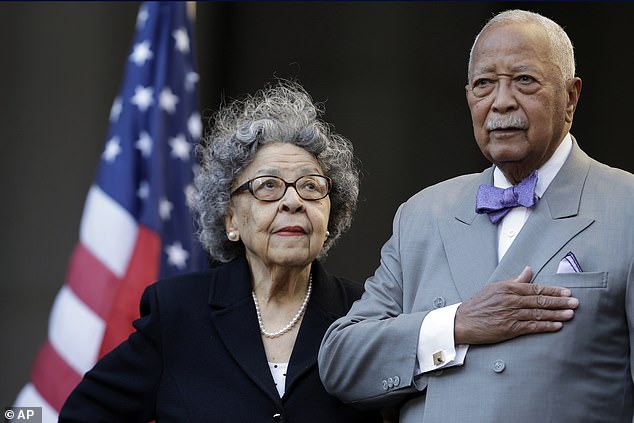 Dinkins is pictured with his wife Joyce in October 2015. She died six weeks before him 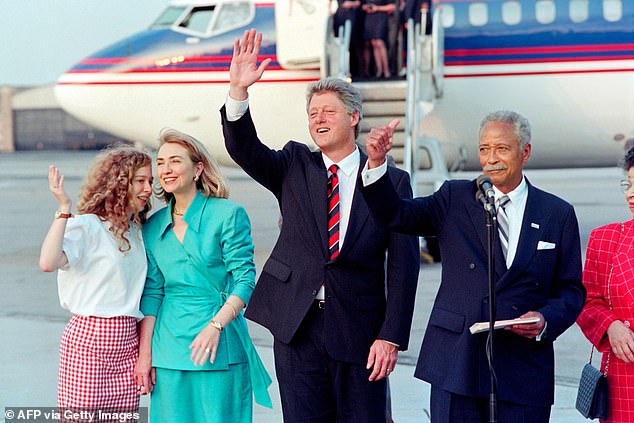 Dinkins with Bill, Hillary and Chelsea Clinton in July 1992 while Bill was campaigning

In recent years, he has got more credit for those accomplishments — credit that Mayor Bill de Blasio said he should have always had.

Results from those accomplishments, however, didn’t come fast enough to earn Dinkins a second term.

Political historians often trace the defeat to Dinkins’ handling of the Crown Heights riots in Brooklyn in 1991.

The violence began after a black seven-year-old boy was accidentally killed by a car in the motorcade of an Orthodox Jewish religious leader. During the three days of anti-Jewish rioting by young black men that followed, a rabbinical student was fatally stabbed. Nearly 190 people were hurt. 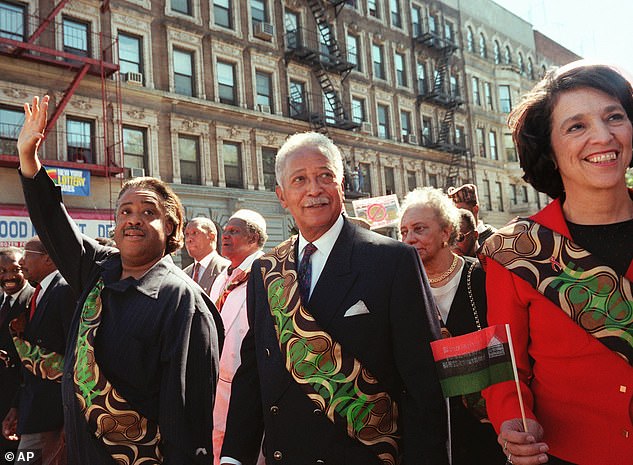 A state report issued in 1993, an election year, cleared Dinkins of the persistently repeated charge that he intentionally held back police in the first days of the violence, but criticized him for not stepping up as a leader.

In a 2013 memoir, Dinkins accused the police department of letting the disturbance get out of hand, and also took a share of the blame, on the grounds that ‘the buck stopped with me.’

But he bitterly blamed his election defeat on prejudice: ‘I think it was just racism, pure and simple.’

David Norman Dinkins was born in in Trenton, New Jersey, on July 10, 1927, the son of Sally and William Harvey Dinkins Jr.

Dinkins moved with his mother to Harlem when his parents divorced while he was in first grade. His mother worked as a dollar-a-day domestic servant.

He returned to Trenton to live with his father and new wife, Lottie Hartgell, and Dinkins excelled in Latin at Trenton Central High School. 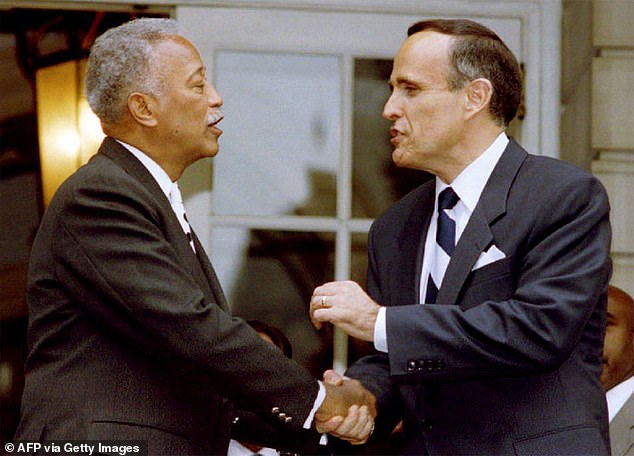 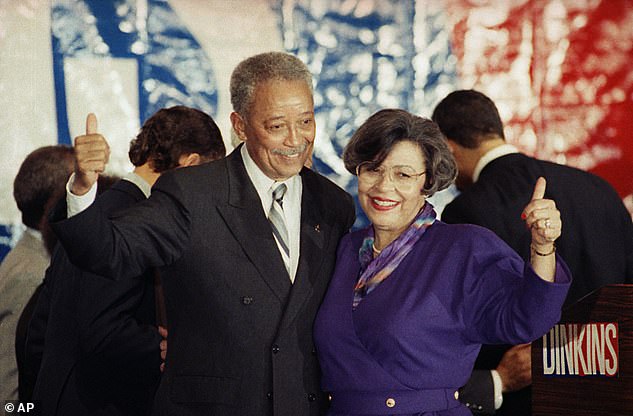 Dinkins is pictured with his wife Joyce in November 1989, having won the election

At high school, he learned an early lesson in discrimination: Blacks were not allowed to use the school swimming pool.

He graduated in 1945 and served for a short time in the Army but later transferred o the Marine Corps and spent 13 months at Camp Lejeune, in North Carolina.

Dinkins recalled how a southern bus driver barred him from boarding a segregated bus because the section for blacks was filled.

‘And I was in my country’s uniform!’ Dinkins recounted years later.

While attending Howard University, the historically black university in Washington, D.C., Dinkins said he gained admission to segregated movie theaters by wearing a turban and faking a foreign accent.

Back in New York with a degree in mathematics, Dinkins married his college sweetheart, Joyce Burrows, in 1953, and the couple had two children David Jr. and Donna Dinkins Hoggard.

The family settled in Harlem and his father-in-law, a power in local Democratic politics, channeled Dinkins into a Harlem political club.

Dinkins paid his dues as a Democratic functionary while earning a law degree from Brooklyn Law School, while working night at his father-in-law’s liquor store, before he then went into private practice.

He got elected to the state Assembly in 1965, became the first black president of the city’s Board of Elections in 1972 and went on to serve as Manhattan borough president.

Dinkins’ election as mayor in 1989 came after two racially charged cases that took place under Koch: the rape of a white jogger in Central Park and the bias murder of a black teenager in Bensonhurst. 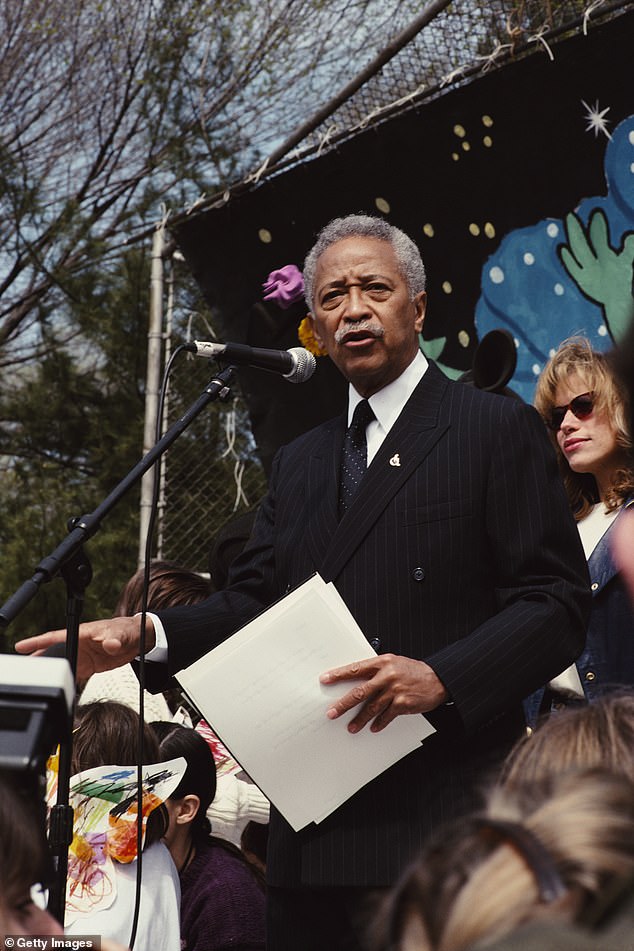 Dinkins defeated Koch, 50 per cent to 42 per cent, in the Democratic primary.

But in a city where party registration was 5-to-1 Democratic, Dinkins barely scraped by the Republican Giuliani in the general election, capturing only 30 per cent of the white vote.

His administration had one early high note: Newly freed Nelson Mandela made New York City his first stop in the U.S. in 1990. Dinkins had been a longtime, outspoken critic of apartheid in South Africa. 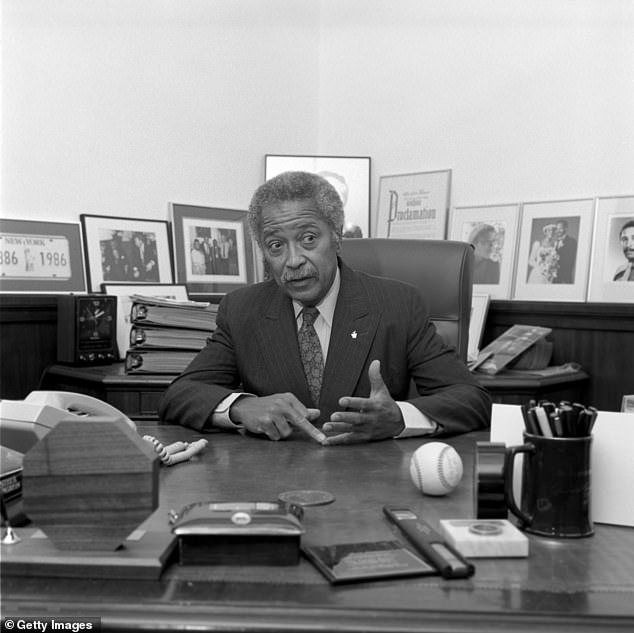 The former mayor is pictured in his office in November 1986, as Manhattan borough president

In that same year, though, Dinkins was criticized for his handling of a black-led boycott of Korean-operated grocery stores in Brooklyn. Critics contended Dinkins waited too long to intervene. He ultimately ended up crossing the boycott line to shop at the stores — but only after Koch did.

During Dinkins’ tenure, the city’s finances were in rough shape because of a recession that cost New York 357,000 private-sector jobs in his first three years in office.

Meanwhile, the city’s murder toll soared to an all-time high, with a record 2,245 homicides during his first year as mayor.

There were 8,340 New Yorkers killed during the Dinkins administration — the bloodiest four-year stretch since the New York Police Department began keeping statistics in 1963.

In the last years of his administration, record-high homicides began a decline that continued for decades.

One of Dinkins’ last acts in 1993 was to sign an agreement with the United States Tennis Association that gave the organization a 99-year lease on city land in Queens in return for building a tennis complex. That deal guaranteed that the U.S. Open would remain in New York City for decades. 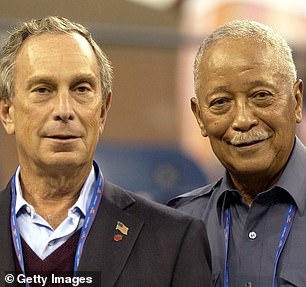 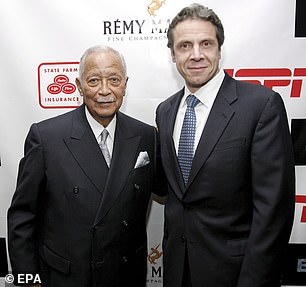 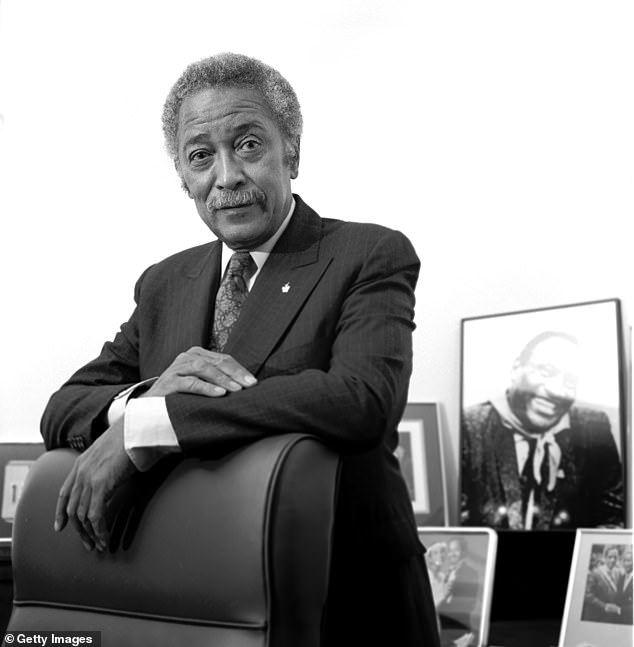 He got elected to the state Assembly in 1965, became the first black president of the city’s Board of Elections in 1972 and went on to serve as Manhattan borough president (pictured in 1986)

After leaving office, Dinkins was a professor at Columbia University’s School of International and Public Affairs.

He had a pacemaker inserted in August 2008, and underwent an emergency appendectomy in October 2007. He also was hospitalized in March 1992 for a bacterial infection that stemmed from an abscess on the wall of his large intestine. He was treated with antibiotics and recovered in a week.

Dinkins is survived by his son, David Jr.; and daughter, Donna and two grandchildren. His wife, Joyce, died in her home in Manhattan in October at the age of 89.

His daughter, healthcare professional Donna Dinkins Hoggard, has been married to vibraphonist Jay Hoggard for more than 20 years and the couple have two children, Jamal Hoggard and Kalila Dinkins Hoggard.

Meanwhile his son, David Dinkins, Jr., is the Senior Vice President and Executive Producer of Showtime Productions on the Showtime Network.

He is a two-time Sports Emmy Award winner and production of boxing and mixed martial arts TV broadcasts.