Nick Clegg was today blasted for a ‘bizarre’, ‘patronising’ and ‘disingenuous’ rant about Facebook’s war with Australia over paying for news content.

The former deputy PM, now vice president of global affairs at the tech giant on a reputed seven-figure salary, complained its position had been ‘misunderstood’ in an extraordinary blog.

Claiming to be telling the ‘real’ story of the standoff, Sir Nick said Facebook temporarily blocked the sharing of news stories in Australia because a new law would have left it signing a ‘blank cheque’ to publishers.

He griped that the platform did not ask people to share news, comparing the situation to ‘forcing carmakers to fund radio stations because people might listen to them in the car, and letting the stations set the price’.

CEO Mark Zuckerberg finally agreed to end the week-long blockade of news after Australian ministers significantly watered down the laws.

Commons Culture Committee chair Julian Knight was among those slating Sir Nick over his justification.

‘Nick Clegg’s bizarre statements remind me of the old saying if you are in a hole stop digging,’ the Tory MP told MailOnline.

‘The idea that Facebook is some sort of innocent drawn into a row because of its pesky users posting news stories stretches credulity to breaking point.

‘To use an analogy of Clegg-like proportions, it’s like blaming students for the 2010 Lib Dem manifesto promising to abolish tuition fees.’ 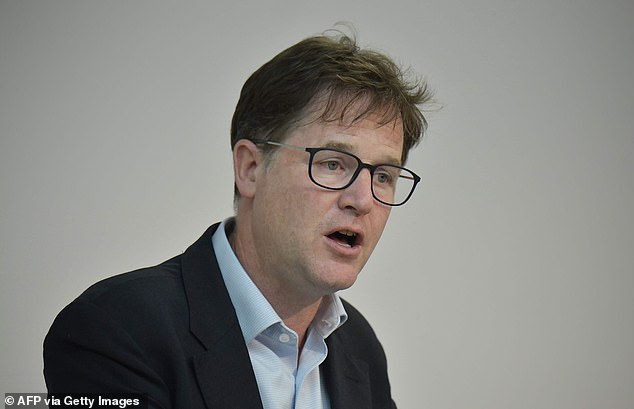 Nick Clegg was today blasted for a ‘bizarre’, ‘patronising’ and ‘disingenuous’ rant about Facebook’s war with Australia over paying for news content 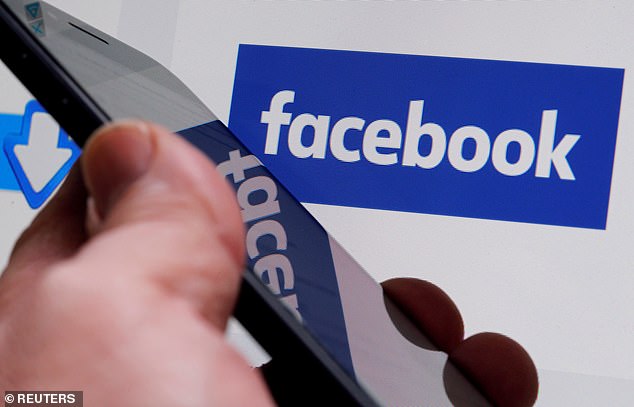 The former deputy PM, now vice president of global affairs at the tech giant on a reputed seven-figure salary, complained its position had been ‘misunderstood’ in an extraordinary blog 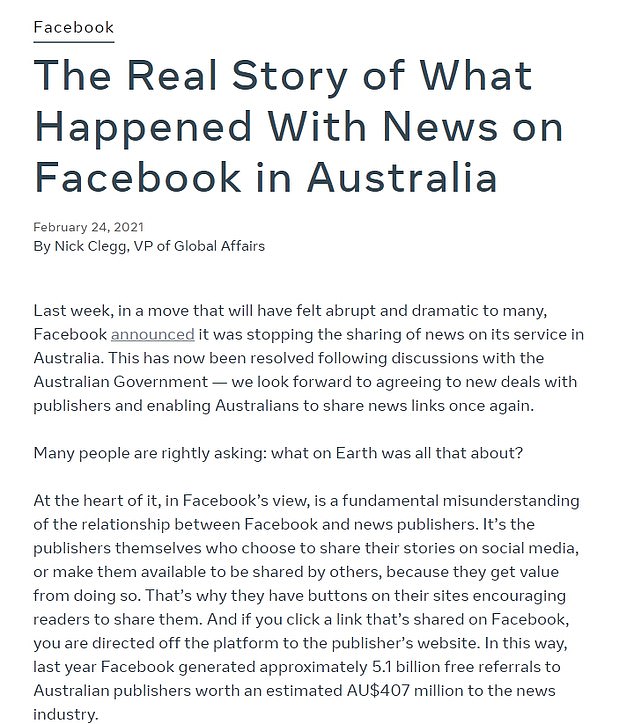 Claiming to be telling the ‘real’ story of the standoff, Sir Nick said Facebook temporarily blocked the sharing of news stories in Australia because a new law would have left it signing a ‘blank cheque’ to publishers

Facebook claims it will have the power to pick and choose who it pays for news after Australia’s new media laws come into force, handing the company a powerful weapon in its fight over paid content.

Campbell Brown, Facebook’s vice president of news partnerships, said Australian ministers assured him today the site will be free ‘to support the publishers we choose to’ after new bargaining laws are voted into force later this week.

The rule could allow Facebook to ban companies demanding higher prices for their news while using cheaper rivals – a significant loophole in legislation that was designed to ‘level the playing field’ between tech firms and publishers.

It could also allow Facebook to block news outlets who are critical of the site, though the final deal has yet to be published.

The concessions will have global ramifications. The UK, EU and US are all considering whether to pass similar rules, but will now find it much harder to go beyond the precedent set in Australia.

Writing online in a blog post titled The Real Story Of What Happened With News On Facebook In Australia, Sir Nick said that while it was ‘understandable’ that some news publishers ‘see Facebook as a potential source of money to make up for their losses’, it would not have been fair to be able to demand a ‘blank cheque’.

‘That’s what the Australian law, as it was proposed, would have done,’ Sir Nick said.

‘Facebook would have been forced to pay potentially unlimited amounts of money to multinational media conglomerates under an arbitration system that deliberately misdescribes the relationship between publishers and Facebook — without even so much as a guarantee that it is used to pay for journalism, let alone support smaller publishers.’

He insisted: ‘We neither take nor ask for the content for which we were being asked to pay a potentially exorbitant price.

Culture Secretary Oliver Dowden is set to meet with Facebook executives over the tech giant’s decision after Downing Street said it was ‘concerned’ about the situation.

Sir Nick said Facebook was ‘more than willing to partner with news publishers’ and pointed to its Facebook News service, which pays news publishers for their content and recently launched in the UK.

‘There are legitimate concerns to be addressed about the size and power of tech companies, just as there are serious issues about the disruption the internet has caused to the news industry,’ he said.

Former culture committee chair Damian Collins told MailOnline the article was ‘pretty disingenuous’ and patronising ‘even by his own high standards’. 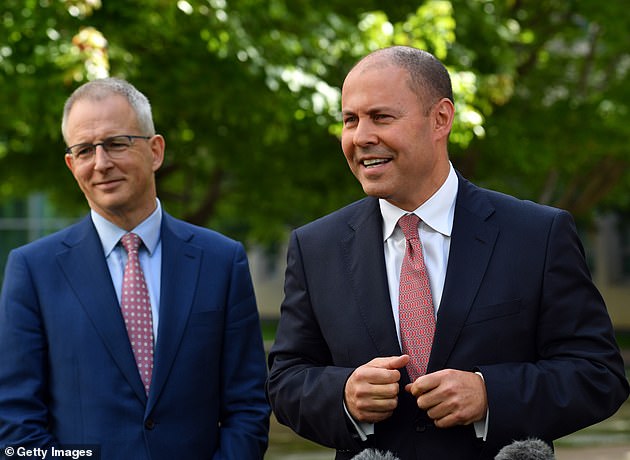 What legal changes has Australia agreed to – and what do they actually mean?

The government says: ‘A decision to designate a platform under the Code must take into account whether a digital platform has made a significant contribution to the sustainability of the Australian news industry through reaching commercial agreements with news media businesses’

What it means: Tech companies will not be affected by the new rules if they strike deals with media publishers and pay enough money

What it means: If the law is going to be applied, then tech companies will be given a month’s notice in order to strike more deals

The government says: ‘Non-differentiation provisions will not be triggered because commercial agreements resulted in different remuneration amounts or commercial outcomes that arose in the course of usual business practices’

The government says: ‘Final offer arbitration is a last resort where commercial deals cannot be reached by requiring mediation, in good faith, to occur prior to arbitration for no longer than two months’

What it means: Even after the rules are applied, tech firms will have two months to negotiate before being forced into arbitration – which will be used only ‘as a last resort’

The government says: ‘These amendments add further impetus for parties to engage in commercial negotiations outside the Code’

What it means: Publishers should do deals with Facebook now, because arbitration is unlikely to be used in practice

‘He implied that Facebook is doing the news industry a favour. If you look what has happened in Australia, not only do Facebook and Google control 80 per cent of the advertising market, since 2006 ad revenues for newspapers have fallen by over 50 per cent,’ Mr Collins said.

‘That has led to papers closing, journalists being laid off, it has created a real problem which is what the competition authorities are trying to address.

‘Nick Clegg seems to neither understand nor care about anything like that.

‘He completely ignores the fact that Facebook makes money by people engaging with content on its platform.

‘It sells advertising against that. And that includes sharing news articles.’

The Tory MP went on: ‘Facebook has got a business model where it makes money out of other people’s content and other people’s data, and it doesn’t think it should have to pay for it.

‘The time has come when it does.’

Australian Treasurer Josh Fryberg has painted the move as a victory, saying Facebook will now negotiate deals to pay for content – albeit with a stronger negotiating hand than it had last week.

Key changes agreed by Australia are that the law will not apply if Facebook can show a ‘significant contribution’ to Australian journalism by striking its own deals with news publishers.

If the law is going to be applied, then Facebook will be given one month’s notice – allowing the company more time to strike deals and wiggle out of regulation.

Even after the law is applied, Facebook will have a further two months to negotiate deals on its terms and will only be forced into arbitration – which would set a fixed price for news content – ‘as a last resort’.

In effect, it means arbitration is unlikely to ever be used and encourages deals to be struck ahead of time – with Mr Frydenberg telling media companies to ‘get out there and talk to Facebook’ as he announced the changes on Tuesday.

The new rules also state that Facebook is free to offer different fees to different news organisations as a result of its negotiations, and will not have to reveal the inner workings of their closely-guarded algorithms or disclose data.

Campbell Brown, Facebook’s vice president of global news partnerships, also claimed the site will retain control over which news organisations get to appear.

‘Going forward, the government has clarified we will retain the ability to decide if news appears on Facebook so that we won’t automatically be subject to forced negotiation,’ he said.

‘We have come to an agreement that will allow us to support the publishers we choose to, including small and local publishers.’

While the final details of the deal have yet to be seen, giving Facebook the option of blocking certain news sites would hand it significant bargaining power while weakening the hand of publishers in negotiations.