The police officer nearly killed in the Novichok attack says he couldn’t watch the TV dramatisation of the Salisbury poisoning and that he and his wife were forced to defend themselves from social media trolls.

Former Detective Sergeant Nick Bailey, 41, fell ill when he touched a door handle which had been smeared with the deadly nerve agent following the attack in March 2018.

Russian double agent Sergei Skripal and his daughter Yulia were found poisoned in the Wiltshire city and Mr Bailey was treated in intensive care after he was the first person to enter Mr Skripal’s home.

While Mr Bailey recovered from the incident, he left Wiltshire Police in October 2020 after 18 years in the force.

A three-part drama series about the poisonings was aired on BBC One last June starring Rafe Spall as the former policeman and, although he and his wife Sarah were involved in making the drama, Mr Bailey has admitted he has not watched the finished product. 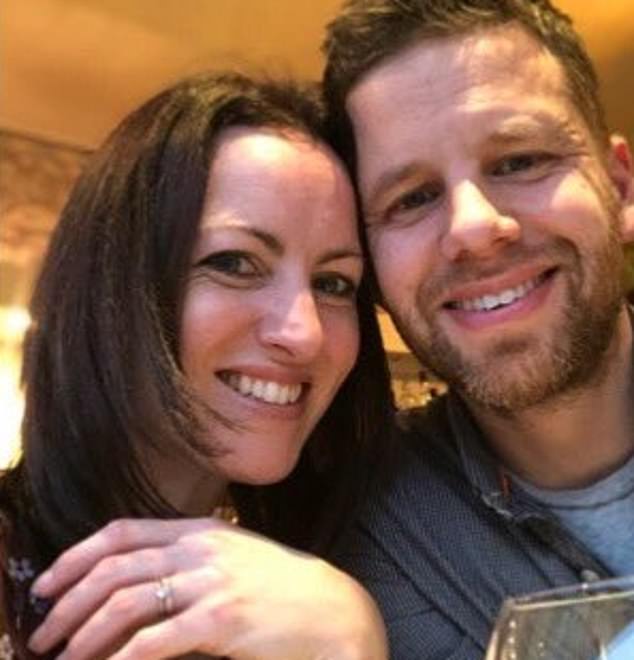 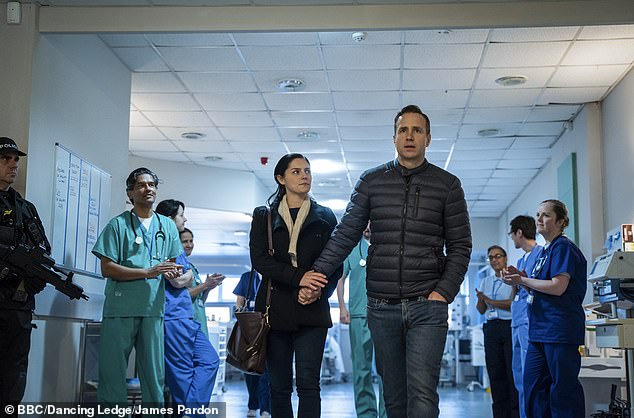 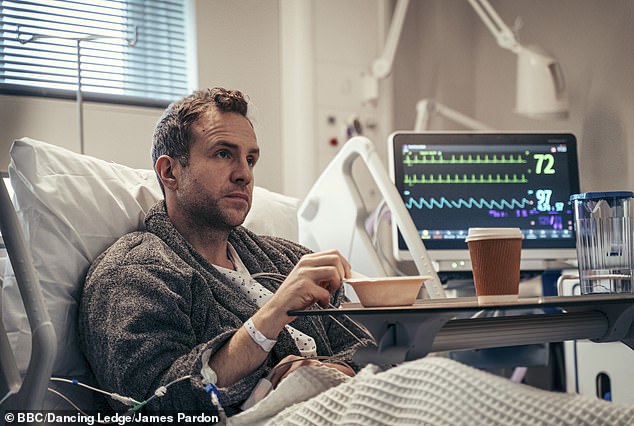 Although he and his wife Sarah were involved in making the drama, Mr Bailey has admitted he has not watched the finished product

Speaking on the Crisis What Crisis podcast, he said: ‘I didn’t watch it when it was aired. We were heavily involved with the making of it because we wanted it to be accurate.

‘I saw raw cuts of it, edited versions of it, but I didn’t watch the final thing, I didn’t want to be involved in that.

‘I think it was done very sensitively and very well and I think that it did to a certain extent bring me a little bit of closure on that part because it was going on for a long time.

‘Did it help? No it didn’t help, because I was still very much living through problems that I was facing.

‘Did it cause more problems? Not really, I mean I didn’t watch it but I suddenly felt – both Sarah and I felt – very compelled to justify and defend ourselves on social media because people were watching it and then understandably airing their views and their opinions on social media.

It comes after Mr Bailey recently revealed he wants to meet the Skripals, having never actually come face-to-face, despite their shared ordeal, some three years on.

While the three of them managed to survive the incident, it later tragically claimed the life of Dawn Sturgess, 44, after she came into contact with a perfume bottle believed to have been used in the attack and then discarded.

Mr Bailey said: ‘I would, I think I would [like to meet them]. Sarah and I talked about this a lot as to whether we’d want to speak to them and to meet them. For a long time I was like ‘no, I don’t’, not for any other reason, I just couldn’t cope with that. 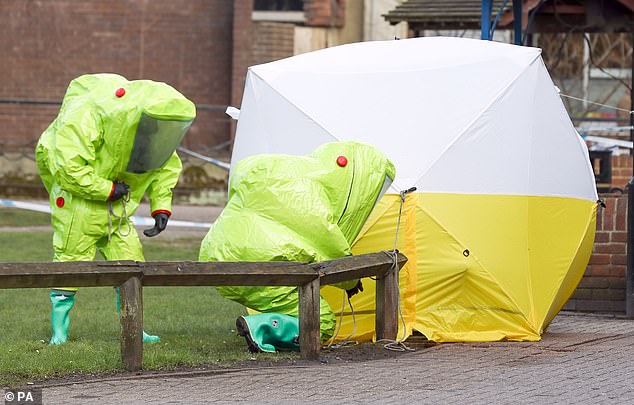 Personnel in hazmat suits work to secure a tent covering a bench in the Maltings shopping centre in Salisbury in 2018, where former Russian double agent Sergei Skripal and his daughter Yulia were found critically ill 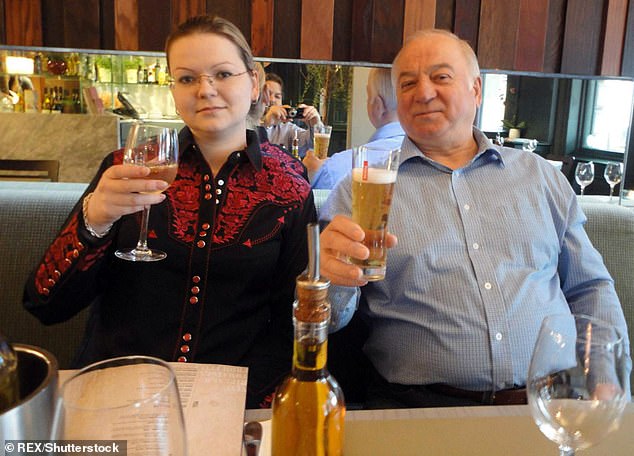 The Skripals having dinner. Bailey who served in the police for 18 years left the force in October last year because he ‘could no longer do the job’ 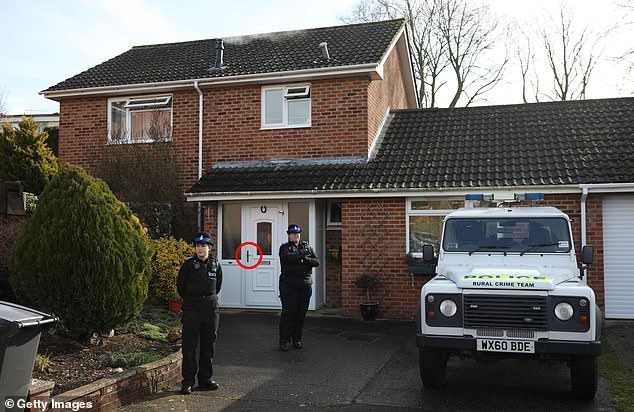 Sergei Skripal’s house, where the door handle was smeared with Novichok as part of the hit 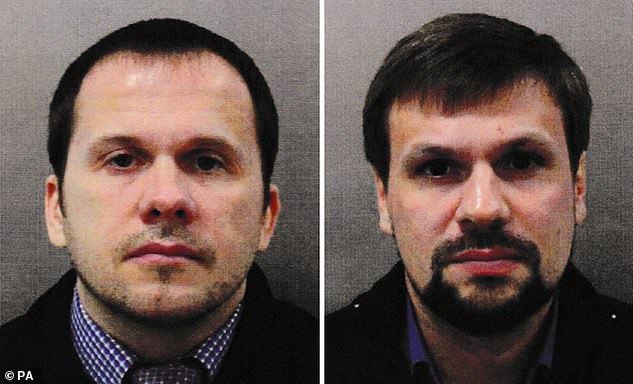 ‘I look back now, obviously it’s been three years and I’ve had enough time, and I think it’d be very interesting to speak to them and to get their take on everything and see how they’re doing as well, because obviously nobody knows how they are.’

The Skripals spent more than a year living in an MI6 safe house after being released from hospital and have since begun a new life in New Zealand under new identities.

And Mr Bailey added: ‘I do wish them well and I hope that they can come out of it as unscathed as you possibly can.’

Two Russian nationals have been accused of travelling to the UK to try to murder Mr Skripal with Novichok, smearing the highly toxic substance on his door handle.

Evidence gathered by intelligence agencies led the Government to conclude the men were officers from the Russian military intelligence service, the GRU.

The suspects – known by the aliases Alexander Petrov and Ruslan Boshirov – were caught on CCTV in Salisbury the day before the attack.

Moscow has repeatedly denied any involvement, with President Vladimir Putin claiming the two suspects were civilians, and the pair stating in an interview that they were tourists visiting Salisbury Cathedral.